“All hail the queen of scream. A Sliver of Darkness is C. J. Tudor at her spine-tingling, nightmare-inducing best. Read it if you dare.”—Chris Whitaker, New York Times bestselling author of We Begin at the End

Time slips. Doomsday scenarios. Killer butterflies. C. J. Tudor’s novels are widely acclaimed for their dark, twisty suspense plots, but with A Sliver of Darkness, she pulls us even further into her dizzying imagination.

In “The Lion at the Gate,” a strange piece of graffiti leads to a terrifying encounter for four school friends. In “Final Course,” the world has descended into darkness, but a group of old friends make time for one last dinner party. In “Runaway Blues,” thwarted love, revenge, and something very nasty stowed in a hat box converge. In “Gloria,” a strange girl at a service station endears herself to a coldhearted killer, but can a leopard really change its spots? And in “I’m Not Ted,” a case of mistaken identity has unforeseen fatal consequences.

Riveting, macabre, and explosively original, A Sliver of Darkness is C. J. Tudor at her most wicked and uninhibited.

An excerpt from A Sliver of Darkness

End of the Liner

In 2021 my family and I went on a cruise for the very first time.

This was during the pandemic, so it was a “staycation cruise.” It only lasted four days, and the ship never left British waters. But it was fun and very family friendly. It was bound to be. It was organized by the major operator in the family entertainment market. (Think mouse).

One day, while Betty was in the pool and Neil and I were on deck, sipping iced cocktails, conversation turned to the pandemic, space programs and the apocalypse (as it does). We stared out over the expanse of water, and I remember Neil saying: “If a virus really obliterated the world, you wouldn’t need to send people into space. Just stick them all on giant cruise ships.”

One of the reasons I love theme parks is because they tread a fine line between magical and creepy. Especially if they are abandoned or run-­down. Anyone who has seen Donnie Darko will know that there’s something quite sinister about someone dressed up in a big furry animal costume. And while everything being shiny and magical is nice for a week or two, would you really want to live like that for the rest of your life? Wouldn’t it perhaps feel a tad authoritarian? Especially if you were in the middle of the ocean with no way to escape.

It was with those ideas in mind that I sat down to write “End of the Liner.”

I hope you enjoy the magic. All aboard now.

She often dreamed of drowning.

In the empty hours between midnight and dawn, she lay in her narrow bunk and imagined the waves taking her. It would be cold. And if she was lucky, the freezing temperatures would claim her before the dark water invaded her mouth and lungs. Or, if she was even luckier, perhaps a Sea God would be merciful.

She wondered if she could request a winter ceremony.

She wondered how it had been for the others.

And when it would be her turn.

Not today. Today she had a packed schedule of breakfast, followed by aqua aerobics on the main deck. Then, an hour or so in the shade, reading. Perhaps she might stroll around the ship before lunch. In the afternoon, the crew often tried to provide entertainment, although the theaters were looking a little tired these days; no amount of clever lighting could disguise the fact that the paint on the elaborate sets was peeling and the velvet upholstery on the seats was faded and patched. People tried not to notice, and for many, it had been that way for all their lives.

But she remembered. And occasionally she felt a yearning for the old days. For a time when this existence was a privileged luxury rather than a slow torture. She glanced at the photographs she kept on her tiny dresser. One of her and Nick when they boarded with her parents. She looked so young, with her new husband—­and they were young, she supposed. She was twenty-­five and Nick was only two years older. They had hardly lived, really. Barely built up a bank of experiences before they boarded the ship and their lives shrank to these decks and corridors.

The other picture she looked at less often, because even a short glance drew fresh pain. Sometimes, she wondered why she kept it at all. Certainly, it did her no favors with the Creators. Those who were “lost” were never spoken of, nor commemorated. Keeping mementos was frowned upon. But it was the one thing Leila couldn’t let go of.

This was the last photo ever taken of her little girl. On the verge of becoming a young woman. Celebrating her eighteenth birthday. Dark hair falling over her face, a wide grin, blue eyes glinting with mischief—­and rebellion. Too much rebellion, perhaps.

Maybe Leila should have been sterner. Maybe she should have encouraged her willfulness less. When Nick had tried to cajole Addison into partaking in traditional female pursuits such as sewing and cookery, perhaps she should have backed him up rather than supporting Addison’s decision to enroll in maintenance and engineering.

Regrets. Mistakes. No life lived long is short of them.

Leila turned away from the photograph. She couldn’t be late for breakfast. The Creators liked routine, and any small aberration meant that questions might be asked. She faced herself in the mirror. Unlike many of the older passengers, whose skin had weathered like leather from the abrasive winds and unforgiving eye of the sun, Leila had always protected herself from the elements. Her skin remained pale and soft, criss-­crossed with a myriad of fine lines. Her blue eyes were clear—­no cataracts yet, although she needed glasses for reading—­and her long, thick hair was pure white, secured into a sensible bun.

Leila smiled at herself in the mirror. Past her heyday, but still holding up. Much like the ship itself.

In two days, she would mark her seventy-­fifth birthday, and fifty years on board.


Breakfast was in the Grand Suite today.

There were three main dining areas and passengers were rotated around them for breakfast, lunch and dinner, grouped by room number. Leila joined the queue to be seated. The queue was the usual mixture of older people like herself and younger families. Children scampered around the atrium playing tag, faces happy and eyes bright. They had never known anything but the ship. The fourteen decks and one thousand two hundred feet their whole universe. Of course, they had the pretense of space and freedom all around them. The skies above, the endless expanse of ocean. But sometimes, Leila thought, that only served to emphasize how small their world had become.

“And how are you this morning, Mrs. Simmonds?”

The maître d’ was a small, coiffed man with tanned skin and sharp black eyes. His name was Julian. He had been the maître d’ here for ten years, ever since his father was retired. Leila didn’t like Julian so much; he had a reputation for snitching. Passengers had learned to be wary around him.

Leila smiled back. “Very well, thank you, Julian. And yourself?”

“Oh, I am always good, Mrs. Simmonds—­and all the better for seeing you.” He smiled, slick and unfelt. “Your companion is already at your table. Let me take you through.”

Leila frowned. “Am I late?”

“No, no. Your companion is a little early this morning.” His smile widened, but it looked strained at the edges. Something was wrong. “Please, come this way.”

Leila followed him between the rows of perfectly laid out tables. The Grand Suite was decorated in the style of a Victorian tearoom. Fake candelabras, walls patterned with floral paper and hung with pictures of the Creators’ famous animated characters in their Victorian finery. The servers were also dressed for the period—­high-­necked blouses and long, full skirts for the women, a suit and waistcoat for the men. Such pretenses, under the circumstances, might seem silly, but it was part of the Creators’ policy. The fourth wall must never be dropped. The passenger experience never compromised. At any cost.

The smell of cooking—­bacon and waffles—­filled the room. Synthetic, of course. They pumped it in via the air vents. No one had eaten real meat in a long time and the breakfast choice was mostly limited to cereals, toast and whatever fruit was in season on the huge floating farms, the Harvesters.

Voices rose and fell. The dining area was large and there had to be a hundred people seated already. But it wasn’t normally this noisy. Often, people ate their breakfast in complete silence, the only sound the scraping of cutlery on bone china. After all, what was there to discuss? No news or politics. No celebrity gossip or scandal. Just the same “blissful” routine, day after day, year after year. This morning, however, Leila could feel a heightened energy in the room.

Leila’s companion was seated at their usual table by one of the round porthole windows. Julian pulled out the chair opposite and Leila sat down.

Julian bobbed like a bird. “I will fetch you some coffee, Madam.”

Leila turned to face the woman opposite. In contrast to Leila, who was tall and angular (and had always felt self-­conscious about her height), Mirabelle was a tiny wisp of a woman, barely five foot tall, with wiry limbs, tanned a deep brown, and a massive mop of brittle, bleached hair. In all the time she had known her, Leila had never seen Mirabelle without a massive pair of sunglasses hiding her face, even indoors.

Before Leila even had a chance to pick up the menu—­out of habit rather than curiosity, as she had eaten the same breakfast every day for the last five decades—­Mirabelle leaned forward and lowered her voice.

C. J. TUDOR is the author of The Burning Girls, The Other People, The Hiding Place, and The Chalk Man, which won the International Thriller Writers Award for Best First Novel, the Barry Award, and the Strand Critics Award for Best Debut Novel. Over the years she has worked as a copywriter, television presenter, voice-over artist, and dog walker. She is now thrilled to be able to write full-time, and doesn’t miss chasing wet dogs through muddy fields all that much. She lives in England with her partner and daughter. 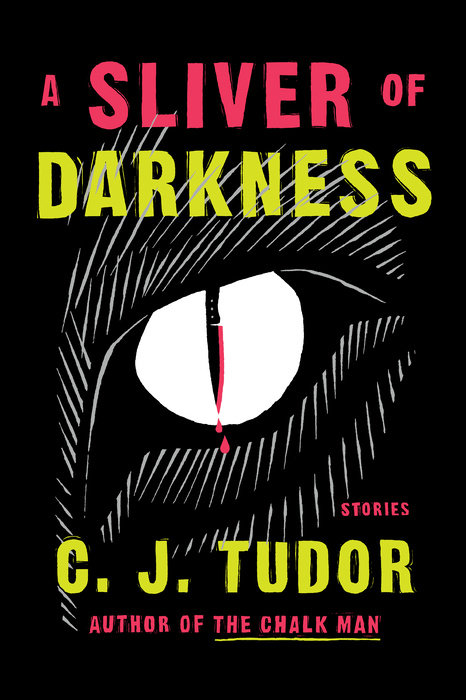