Is it ever too late to leave the friend zone? Discover the heartwarming friends to lovers romance that became a sensation on TikTok—now with a new chapter and a Q&A with the author!

The friend zone is not the end zone for Bree Camden, who is helplessly in love with her longtime best friend and extremely hot NFL legend, Nathan Donelson. The only problem is that she can’t admit her true feelings, because he clearly sees her as a best friend with no romantic potential, and the last thing Bree wants is to ruin their relationship. But those abs . . .

Nope! Nothing but good old-fashioned, no-touching-the-sexiest-man-alive, platonic friendship for Bree. In any case, she has other things to worry about. After a car accident ended her chance at becoming a professional ballerina, Bree changed paths and now owns her own dance studio, with big dreams to expand it. But one more rent increase could mean the end of the studio entirely.

Then, as usual, Nathan comes to the rescue and buys the entire building. A stubborn Bree is not happy about it and decides to rebel with a couple—okay, maybe more than a couple—of tequila shots. Then her plan backfires as she spills her deepest, darkest secret to a TMZ reporter. One viral video later, the world thinks Nathan and Bree are the perfect couple. Before they can really talk about her confession, Nathan’s publicist proposes a big opportunity that could mean financial security for Bree. The catch? They have to pretend to be in love. For three whole weeks.

What will happen when Bree gives in to the feelings she’s been desperately hiding for so long, and could she be imagining that Nathan is actually enjoying it? Sarah Adams scores more than touchdowns in this exciting romantic comedy.

An excerpt from The Cheat Sheet


Balancing two cups of burning hot coffee and a box of donuts while trying to unlock a front door is not easy. But because I’m the best friend a person could ever ask for—which I will remind Nathan of as soon as I make it inside his apartment—I manage it.

I hiss when I turn the lock and a splash of coffee darts out onto my wrist through the little hole in the lid. I have fair skin, so there’s a one million percent chance it’s going to leave an angry red mark.

The moment I step inside Nathan’s apartment (which really should not be called an apartment because it’s the size of five large apartments smooshed together), the familiar clean and crisp scent of him knocks into me like a bus. I know this smell so well I think I could follow it like a bloodhound if he ever goes missing.

Using the heel of my tennis shoe, I slam the front door shut with enough gusto to warn Nathan that I’m on the premises. ATTENTION ALL SEXY QUARTERBACKS! COVER YOUR GOODS! A GREEDYEYED WOMAN IS IN THE HOUSE!

A high-pitched yelp sounds from the kitchen, and I immediately frown. Peeking around the corner, I find a woman wearing a light pink shorts-and-camisole sleep set pressed into the far corner of the wraparound white marble kitchen counter. She’s clutching a butcher knife to her chest. We’re separated by a massive island, but from the way her eyes are bugging out, you’d think I was holding matching cutlery against the jugular vein in her neck.

“DON’T COME ANY CLOSER!” she screeches, and I immediately roll my eyes, because why does she have to be so screechy? She sounds like a clothespin is pinching the bridge of her nose and she has recently inhaled a whole balloon full of helium.

I would raise my hands in the air so I don’t get knifed to death, but I’m sort of loaded down with breakfast goods—goods for me and Nathan, not Miss Screechy. This isn’t my first rodeo with one of Nathan’s girlfriends, though, so I do what I always do and smile at Kelsey. And yeah, I know her name, because even though she pretends not to remember me every time we meet, she’s been dating Nathan for a few months now and we have met several times. I have no idea how he spends time with this woman. She seems so opposite of the type of person I would pick for him—they all do.

“Kelsey! It’s me, Bree. Remember?” Nathan’s best friend since high school. The woman who was here before you and will be here well after you. REMEMBER ME?!

She releases a big puff of air and lets her shoulders sag in relief. “Oh my gosh, Bree! You scared me to death. I thought you were some stalker girl who broke in somehow.” She sets the knife down, raises one of her perfectly manicured eyebrows, and mumbles not so quietly, “But then again . . . you sort of are.”

I narrow my eyes at her with a tight smile. “Nathan up yet?”

It’s 6:30 a.m. on a Tuesday morning, so I know for a fact he’s already awake. Any girlfriend of Nathan’s knows if she wants to see him at all that day, she has to wake up just as early as he does. Which is why Satin-PJ-Kelsey is standing in the kitchen looking pissed off. No one appreciates the morning quite like Nathan. Well, except for me—I love it too. But we’re sort of weirdos.

She turns her head slowly to me, hate burning in her delicate baby blues. “Yes. He’s in the shower.”

Kelsey looks at me like it grieves her deeply to have to expound. “I accidentally bumped into him when I came into the kitchen a few minutes ago. He had his protein shake in his hand and . . .” She makes an annoyed gesture, letting it finish the story for her: I dumped Nathan’s shake down the front of him. I think it’s killing her to admit she did something human, so I take pity on her and turn away to set the donut box down on the ridiculously large center island.

Nathan’s kitchen is fantastic. It’s designed in monochromatic tones of cream, black, and brass, and an expansive window wall overlooks the ocean. It’s my favorite place in the world to cook, and exactly the opposite of my dumpy little garbage bin five blocks down the road. But that dumpy little garbage bin is affordable and close to my ballet studio, so all in all, I can’t complain.

“I’m sure it wasn’t a big deal. Nathan never gets upset about things like that,” I say to Kelsey, waving my white flag one last time.

She takes out her samurai sword and slices it to shreds. “I already know that.”

I take my first sip of coffee and let it warm me under Kelsey’s frigid stare. Nothing to do but wait for Nathan to surface so we can get going with our Tuesday tradition. It dates all the way back to our junior year of high school. I was a sort of self-designated loner in those days, not because I didn’t love people or socializing, but because I lived and breathed ballet. My mom used to encourage me to skip dance occasionally to go to a party and be with my friends. “These days of getting to just be a kid and have fun won’t last forever. Ballet isn’t everything. It’s important to build a life outside of it too,” she said to me on more than one occasion. And of course, like most dutiful teenagers . . . I didn’t listen.

Between dancing and my after-school job working in a restaurant, I didn’t really have friends. But then he happened. I wanted to increase my endurance, so I started running at our school’s track before school, and the only day I could make this happen schedule-wise was on Tuesdays. I showed up one morning and was shocked to see another student already running. Not just any student, but the captain of the football team. Mr. Hottie McHotterson. (Nathan didn’t have an awkward phase. He looked like a twenty-five-year-old at sixteen. So unfair.)

Jocks were supposed to be rude. Chauvinistic. Full of themselves. Not Nathan. He saw me in my scuffed-up sneakers, curly hair piled on my head in the grossest bun anyone has ever seen, and he stopped running. He came over and introduced himself with his huge trademark smile and asked if I wanted to run with him. We talked the entire time, instant best friends with so much in common, despite our different upbringings.

Yeah, you guessed it—he comes from a wealthy family. His dad is the CEO of a tech company and has never shown much interest in Nathan unless he’s showing him off on the golf course in front of his work friends, and his mom pretty much just hung around and badgered him to make it to the top and bring her into the limelight with him. They always had money, but what they didn’t have until Nathan made it big was social standing. In case you can’t tell, I’m not a huge fan of his parents.

So anyway, thus began our Tuesday tradition. And the exact moment I fell for Nathan? I can pinpoint it down to the second.

We were on our final lap of that very first run together when his hand caught mine. He tugged me to a stop then bent down in front of me and tied my shoe. He could have just told me it was untied, but no—Nathan’s not like that. It doesn’t matter who you are or how famous he is; if your shoe is untied, he’s going to tie it for you. I’ve never met anyone else like that. I was so gone for him from day one.

We were both so determined to achieve success, despite how young we were. He always knew he’d end up in the NFL, and I knew I was headed to Juilliard and then to dance in a company after. One of those dreams became a reality, and one did not. Unfortunately, we lost touch during college (fine, I made us lose touch), but I serendipitously moved to LA after graduating when a friend told me about another friend who was looking to hire an assistant instructor at her dance studio just as Nathan signed with the LA Sharks and moved to town as well.

We bumped into each other at a coffee shop, he asked if I wanted to go for a jog on Tuesday for old time’s sake, and the rest was history. Our friendship picked right back up as if no time had passed at all, and unfortunately, my heart still pined for him the same as it had back then too.

The funny thing is, Nathan was never projected to reach the heights in his career that he has. Nope, Nathan Donelson was drafted in the seventh round, and he effectively warmed the bench as a backup quarterback for two whole years. He never got discouraged, though. He worked harder, trained harder, and made sure he was ready if his time came to take the field, because that’s how Nathan approaches everything in life: with nothing but 100 percent effort.

And then one day, it all paid off for him.

Sarah Adams is the author of When in Rome and The Cheat Sheet. Born and raised in Nashville, Tennessee, she loves her family and warm days. Sarah has dreamed of being a writer since she was a girl, but finally wrote her first novel when her daughters were napping and she no longer had any excuses to put it off. Sarah is a coffee addict, a British history nerd, a mom of two daughters, married to her best friend, and an indecisive introvert. Her hope is to write stories that make readers laugh, maybe even cry—but always leave them happier than when they started reading. 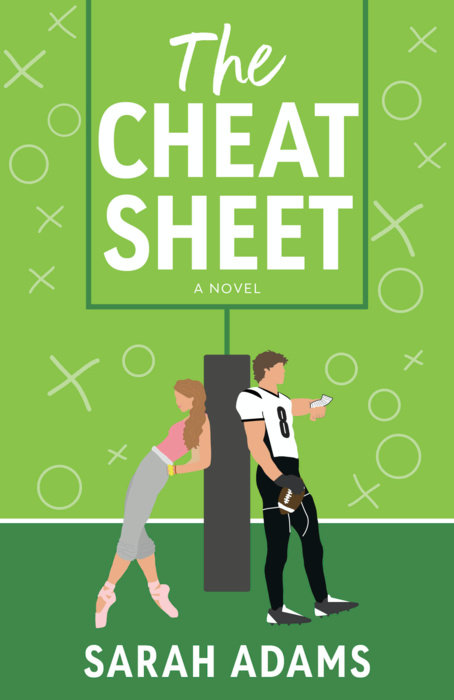