Is it possible to love someone you've never met? A young woman finds out in this sweeping will-they-or-won't-they love story that begins with a chance wrong number dial. . . .

“A total delight . . . achingly romantic, full of suspense, and a beautiful cast of characters.”—Laura Jane Williams, author of Our Stop

When Hannah picks up a call from an unknown number, she thinks nothing of it—it’s just an easygoing American named Davey who misdialed her while calling into a job interview. And when Hannah wishes him luck after clearing up the confusion, she never actually expects to hear from him again.

Then she gets a text saying he got the job and he’ll be moving to London, and she can’t help but smile. Soon their texts become phone calls that turn into video calls, and their friendship becomes a relationship they can’t wait to start in earnest once Davey lands in London in a month’s time.

But when Hannah goes to meet him at the airport, Davey isn’t there—and the reason why changes both of their lives in an instant. With their future together suddenly so uncertain, they don’t know what to do but try to move on from each other.

Though their chance at love seems lost forever, neither is never far from the other’s thoughts. Will fate intervene once more to bring the two together, or will Davey always be the man that Hannah never met?

An excerpt from The Man I Never Met

Do you remember where you were and what you were doing the moment your life changed forever? I do. I was standing outside the gym, hair in a bit of a tangle, in need of a shower after a grueling spin class, rifling in my bag for my gloves while my mobile buzzed away. But of course I didn’t know it at the time. That’s always how it is, though, isn’t it? You never realize the true significance of a moment until later.

I grab my phone, still unable to find the gloves that have disappeared into the depths of my bag. The December weather is biting cold, and although it’s only early evening the sky is already a shade of ink, strewn with gray clouds that look as if they’ve been painted on and dragged gently from one side of the canvas to the other.

The dialing code says +1 and so I pause momentarily as my phone continues to vibrate in my hand. Where on earth is +1? Call centers start with a random assortment of codes and this doesn’t look like any of those.

“Hello,” a man, with an American accent, replies. And then in a deeper, friendlier tone, “Jonathan White?”

I laugh. “Do I sound like a Jonathan White?”

“No. Sorry, you’ve got the wrong number.”

“Bye,” I say, but he’s already gone. And then barely ten seconds pass before my phone rings again.

I draw out the word “Hello” as I answer—­the same +1 number shining on my screen.

“Oh, not again,” he says in exasperation. “How have I dialed it wrong a second time? I can’t be that stupid.” Which makes me laugh again, although not unkindly.

Silence and then, “Hold on.”

I wait, smiling with amusement. The cold weather is seemingly not as cold now as it was before.

“Is this plus-­four-­four . . .” and he reels out a list of digits that are most certainly mine.

“It is. What number were you looking for?”

I try not to laugh.

“Shit,” he replies. “I wrote it down wrong. I’m supposed to call this number at four p.m. UK time, for a job interview.”

“Not this number, I’m afraid. Maybe try switching one of the digits?”

“Yeah,” he says uncertainly. “But which one? There’s about a billion possible combinations.”

“I have no idea. Where are you ringing from?”

“And you have a job interview with someone on a UK number? Are you getting a job over here?” I’m so nosy.

“Unlikely, given you’re on the phone to me and you should be answering questions about . . . whatever it is you’re interviewing for.”

“Buildings. I should be answering questions about buildings right about now. Shit.”

“Architecture, specifically.” He has a really nice voice. Deep, but not too deep.

“Try and google the office number,” I suggest, in case he really is that stupid and hasn’t thought of it.

“I’m already on it.” He’s speaking quickly, both of us aware that he should be minutes into an interview by now.

“The right number or the job?”

“Both. Starting with the right number,” I say, with a smile.

“Thanks. Sorry for bothering you. Twice.”

“Bye,” I reply as the line goes dead. I stare at the phone for a few seconds, hoping he isn’t silly enough to ring the same number a third time . . . just to be sure. It wouldn’t be a terrible thing if he rings again, but now I want this man with the lovely voice to actually call the correct number, answer questions about buildings, and get the job. Whomever he might be.

It’s not really the done thing to come home from an hour’s spin class and crack open both a microwave meal and a large glass of wine, but given it’s Friday night, that’s what I do. And anyway I wouldn’t have been at the gym if I hadn’t been canceled by a flaky man, with whom I’d already decided I would categorically not reschedule. He’s done this twice now and we still haven’t actually had a first date yet. My best friend, Miranda, calls it Cancel-­itis. So this glass of wine was the one that I would have had if I had been out. There, I have justified that, if not the hideous microwave curry.

Hours later I flick through the various options on TV and wonder how it is that I’ve managed to watch everything decent on Netflix when I really don’t spend that much time at home. Perhaps, for once, I should watch the news and at least try to be as informed as my co-­workers about the daily goings-­on in the world. I really need to work with people who watch more trashy dramas than Question Time.

Next to me my phone dings, telling me I have a message. I read it. It’s from a number I don’t recognize, until I look closer and see it’s the American’s. The message contains three words. I got it.

I mute the TV and let it continue showing me a background of filler news pieces that I haven’t been paying attention to.

Does he want a reply? Does he expect one? I’m glad, I type, followed by, Congratulations. I’m guessing you found the right number in the end.

I didn’t pose it as a question. I didn’t expect a reply, but one comes moments later.

Yeah. I apologized for being a few minutes late and told him what I’d done. He was cool about it.

I’m glad, I type. And then I delete it because it is exactly what I’ve written a moment ago. I replace it with, Always best to be honest.

I watch the screen. He isn’t typing. It’s my turn to reply, but I can’t think of anything else to say and so, after a moment, he resumes.

So, England in January. Cold?

A smile finds the corners of my mouth. Very. Sorry about that. Is that when you arrive?

Exactly one month from now. Yeah.

Where are you in Texas?

No, I have no idea where that is. I leave the chat, google Austin, Texas, and then open the chat window back up, ready to display my newfound knowledge. Warm this time of year.

Warm all times of year.

I googled, I confess. Capital city of Texas, so Wikipedia tells me. I’ve just discovered Houston is also in Texas. So there you go.

He replies with a laughter emoji and then, Where are you?

Great. Now I’ll know another person when I get there.

I look at his message, unsure what to think. Is he suggesting we meet up? Become friends? I look at the message so long that the screen goes black and I have to key in my code to unlock it again. It shows his number and, underneath, that he’s still online. What’s your name? I ask.

Nice to meet you, Hannah.

I smile again. It is nice to meet him. Albeit, this is the strangest way I’ve ever “met” anyone. How old are you? I ask.

I’m twenty-­seven, I reply to his leading prompt. I’m enjoying this and wonder now for the first time what he looks like, this twenty-­nine-­year-­old man from Texas. His WhatsApp profile picture is blank, the circle at the top of the chat displaying the standard grey-­and-­white icon. Who does that? Mind you, mine is a picture of our family dog wearing sunglasses, so I’m not exactly one to talk.

What time is it there? he asks.

It was nice talking to you, Hannah.

Oh. That’s a blunt ending to the conversation, and disappointment that he’s signing off makes me pause before replying, Likewise.

I let that message display on the screen for a moment as I think about it. How to reply without sounding eager or utterly disinterested?

I opt for a casual, Sure.

And then he’s gone.

Elle Cook worked as a journalist and in PR before becoming a full-time novelist. She is the author of three historical novels under her real name, Lorna Cook. The Man I Never Met is her U.S. debut. 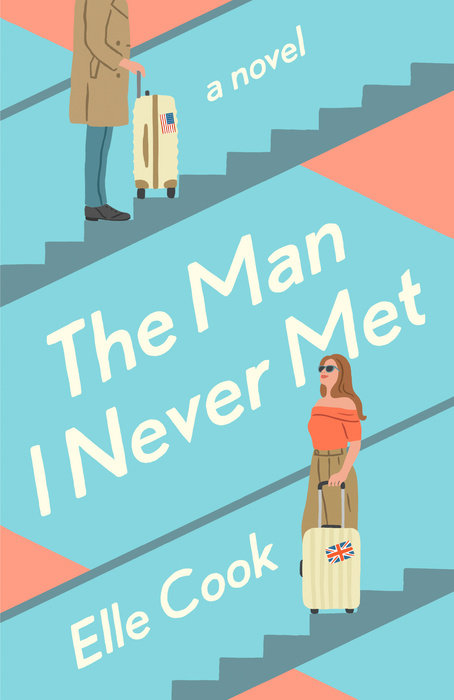