The Classic Memoir of a Trailblazing War Correspondent

“A long-overlooked classic that could not be timelier or more engrossing.”—Paula McLain, author of The Paris Wife

Foreword by Christina Lamb, Sunday Times chief foreign correspondent and co-author of I Am Malala

Virginia Cowles was just twenty-seven years old when she decided to transform herself from a society columnist into a foreign press correspondent. Looking for Trouble is the story of this evolution, as Cowles reports from both sides of the Spanish Civil War, London on the first day of the Blitz, Nazi-run Munich, and Finland’s bitter, bloody resistance to the Russian invasion. Along the way, Cowles also meets Adolf Hitler (“an inconspicuous little man”), Benito Mussolini, Winston Churchill, Martha Gellhorn, and Ernest Hemingway. Her reportage blends sharp political analysis with a gossip columnist’s chatty approachability and a novelist’s empathy.

Cowles understood in 1937—long before even the average politician—that Fascism in Europe was a threat to democracy everywhere. Her insights on extremism are as piercing and relevant today as they were eighty years ago.

An excerpt from Looking for Trouble

If you look back over the newspapers of March 1937 you will recall a number of things: that the Normandie beat the record for the Atlantic crossing; that King Leopold visited London; that Neville Chamberlain succeeded Stanley Baldwin as Prime Minister of England; that the lost diary of Dr. Samuel Johnson was found; that Queen Marie of Romania was gravely ill; and that Noël Coward was resting.

You will also read that General Franco launched an offensive. On March 10th the newspapers reported that he had broken through the Madrid defenses and on the following day the correspondent of the London Daily Telegraph wrote:

The Nationalists have advanced eighteen miles in two days. They are now fifteen miles from Guadalajara. The defenders of Madrid realize that the battle of Guadalajara will decide the fate of the capital.

A few days later the story began to trickle out and the world learned that not only was Madrid still standing, but that Franco’s Italian Legionaries had broken and fled, and the Nationalist offensive had been turned into the first (and what proved to be the last) major victory for the Republic.

It was a week after the battle of Guadalajara that I made my first trip to Spain. I stood at the Toulouse aerodrome at five-thirty in the morning waiting for an airplane to take me to Valencia. It was pitch black and bitterly cold. The frost on the ground shimmered through the darkness like a ghostly shroud, and the small red bulbs outlining the airfield had an eerie glow. My heart began to sink at the prospect of the trip.

I had no qualifications as a war correspondent except curiosity. Although I had travelled in Europe and the Far East a good deal, and written a number of articles, mainly for the “March of Events’ section of the Hearst newspapers, my adventures were of a peaceful nature. In fact, after a twelve-month trip from London to Tokyo in 1934, I had written an article for Harper’s Bazaar which soon dated sadly. It was entitled: “The Safe, Safe World.”

When the war broke out in Spain, I saw an opportunity for more vigorous reporting; I thought it would be interesting to cover both sides and write a series of articles contrasting the two. I persuaded Mr. T. V. Ranck of the Hearst newspapers that this was a good proposition and happily set off for Europe. I knew no one in Spain and hadn’t the least idea how one went about such an assignment, so waited until reaching Paris before mapping out a plan of campaign. And then the battle of Guadalajara took place. I read about the heroic resistance of beleaguered Madrid, and decided that Madrid was obviously the place to go.

Friends in Paris were not encouraging. They warned me if I didn’t dress shabbily I would be “bumped off” in the streets; some suggested men’s clothes; others rags and tatters. I finally took three wool dresses and a fur jacket.

They also filled me with atrocity stories and gloomily predicted that if I was not shot down on the flight to Valencia I would surely be bombed on the road to Madrid. I had paid no attention to their forebodings, but now, as I stood on the aerodrome, a procession of terrible pictures filtered through my mind. I went into the waiting room to have a cup of coffee and took comfort from the fact that no one seemed impressed by the imminent departure of a plane for the perils of “war-torn” Spain. There were only a half-dozen people in the room; some reading yesterday’s evening papers, some sleeping with their heads on the tables. It was so cold the French mechanics were pacing up and down, stopping every now and then to warm their hands over a small stove. At last the door opened and a man announced the plane was ready to leave. I paid my bill, and as I got up an old man in a black beret who had been sitting quietly by the fire walked over to me, clasped my hand, and in a voice trembling with emotion said: “Bonne chance, mademoiselle, bonne chance.” I stepped into the airplane with a feeling of doom.

It took us only an hour to reach Barcelona. Most of it was spent in flying over the Pyrenees. The mountains were covered with snow and at first they looked grey and remote; then the dawn came up and they were swept with a fiery pink. When we circled down to a landing and I walked into the airport waiting room, I remember the surprise I felt at my first picture of Spain. The scene was so peaceful it was almost incongruous. A woman sat behind the counter knitting a sweater, two old gentlemen in black corduroy suits were at a table drinking brandy, and a small girl sprawled on the floor with a cat. They greeted the French pilots cordially, but when the latter commented on the war and asked for the latest news, one of the old men shrugged his shoulders uninterestedly, and said: “The war has nothing to do with Catalonia. We don’t want any part of it; all we want is to be left alone.”

We had a cup of coffee, our baggage was inspected by an indifferent customs officer, and an hour later we were in Valencia.

Valencia was a mass of swarming humanity. It was the temporary seat of the Government and its population of four hundred thousand had swollen to over a million. People poured through the streets, crowded the squares, clustered the doorways, thronged the beaches and flowed endlessly through the markets, to the shops and cafés. Everything was noise and confusion. Horse-drawn carts clattered over the cobblestones, and automobiles, with official stickers pasted on the windshields, raced dangerously down the main thoroughfares honking their horns wildly. The buildings were plastered with garish posters showing the mangled bodies of women and children and inscribed with the single word: “Fascism!” Down the street a gramophone blared out gaily: “I can’t give you anything but love, Baby.”

I was deposited at the Air France office on the main street and regarded the scene with bewilderment. I asked the way to the best hotel and the clerk told me a mile or so “down the road.” It was impossible to get a porter or a taxi. I only had one suitcase and a typewriter, so I started to walk. All the people on the streets were working-class people and everyone was dressed in black: the women wore black cotton dresses and shawls over their heads, and the men black suits and berets. Some of them paused to stare darkly at me and at first I thought it was because I was the only person wearing a hat; then I suddenly realized that the red and yellow bands painted inadvertently on my suitcase were General Franco’s colors.

A street car came by and I climbed on nervously, but I had to get off at the next stop, for I had no Spanish money and I couldn’t make the conductor understand that by accepting a ten-franc note he was driving a good bargain.

I finally reached the Hotel Bristol and found it packed. People were even sleeping in armchairs in the lobby. I left my bags and went into the dining room for lunch. The restaurant was crowded with a strange assortment of characters: few of them looked like Spaniards, and I later learned that this was the Valencia backwash—businessmen, agents provocateurs, social workers, spies and racketeers. I asked the waiter if any American or English correspondents were staying in the hotel, and he told me Mr. Kennedy of the Associated Press was sitting at a table across the room. I sent him a note telling him of my predicament and asking him to help me.

Mr. Kennedy was a tough young American reporter, with an efficiency for which I was deeply thankful. Within an hour he had browbeaten the manager of the hotel into finding me a room, and introduced me to the foreign press chief, who arranged for me to go to Madrid by car in two days’ time.

I remember pressing Kennedy with questions about the war, and in order to have a place to talk we took a dilapidated carriage and drove around the town. It was pleasant on the outskirts; the crowds thinned out, the Mediterranean stretched peacefully before us, and, in the fields behind, long rows of orange trees glowed in the sun. I was at a loss to understand how much of the general confusion of Valencia was due to the war, how much to the revolution, and how much to Spain.

I told him I thought Spain was exciting and he gave me a sour smile.

“Listen, sister, I’m too fed up with red tape and censorship trouble and not even a healthy American cigarette to smoke or a decent-looking dame to take out to dinner, to think of this any longer as a great big adventure. You’ll learn.”

I must have looked crestfallen, for a moment later he added: “Of course, Madrid isn’t so bad. You get shelled every day and the food’s rotten, but at least there’s something to do besides arguing with a bunch of people who only know how to say mañana. There are lots of correspondents there and you can get out to the front when you want and see some action. Not like this burg; half of them don’t even know there’s a war on.”

The Classic Memoir of a Trailblazing War Correspondent 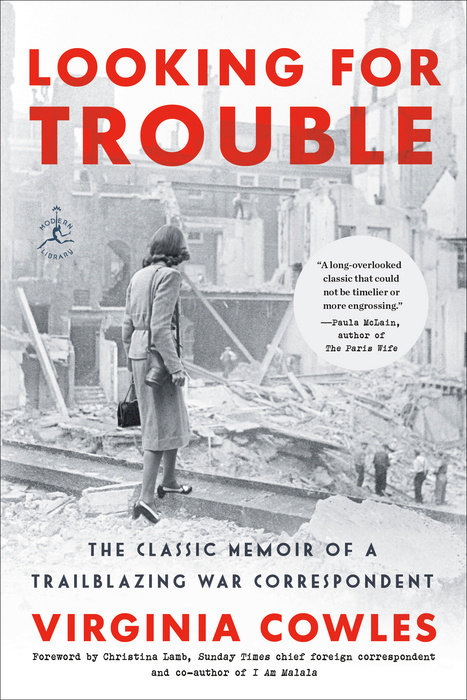