The second book of the smash-hit Wayward Pines trilogy, from the New York Times bestselling author of Dark Matter, Recursion, and Upgrade

Nestled amid picture-perfect mountains, the idyllic town of Wayward Pines is a modern-day Eden—at least at first glance.

Except that within its fences, the residents are told where to work, how to live, and who to marry. None of them know how they got here. Some believe they are dead. Others think they’re trapped in an unfathomable experiment. Everyone secretly dreams of leaving, but those who dare face a terrifying surprise.

As sheriff, Ethan Burke is tasked with enforcing the town’s laws, and he’s one of the few entrusted with the truth—even though, for all his knowledge, he’s as much a prisoner of Wayward Pines as anyone else.

But when a murder investigation draws him deeper into the town’s inner workings, Ethan learns that its past is darker than even he suspected—and finds himself faced with an impossible choice.

The second novel in Blake Crouch’s blockbuster trilogy, Wayward delves deeper into the irresistible mysteries and horrors of this perfect little town, even as it asks what it means to live with secrets—and what price we’ll pay for the truth.

An excerpt from Wayward

Mustin had been watching the creature through the Schmidt & Bender telescopic sight for the better part of an hour. It had come over the cirque at daybreak, pausing as the first radials of sunlight struck its translucent skin. Its progression down through the boulder field had been slow and careful, stopping occasionally to sniff the remains of others like it. Others Mustin had killed.

The sniper reached up to the scope, adjusted the parallax, and settled back in behind the focus. Conditions were ideal—clear visibility, mild temperature, no wind. With the reticle set at 25x zoom, the creature’s ghostly silhouette popped against the gray of the shattered rock. At a distance of one and a half miles, its head was no larger than a grain of sand.

If he didn’t take the shot now, he’d have to range the target again. And there was a possibility that by the time he was ready to shoot, the creature would have passed out of his sight line. It wouldn’t be the end of the world. There was still a high-voltage security fence a half mile down the canyon. But if it managed to scale the cliffs over the top of the razor wire, there’d be trouble. He’d have to radio in. Call for a team. Extra work. Extra time. Every effort would be made to stop the creature from reaching town. He’d almost certainly catch an ass-chewing from Pilcher.

He let it out.

He counted to three and squeezed the trigger.

The British-made AWM bucked hard against his shoulder, the report dampened by the suppressor. Recovering from the recoil, he found his target in the sphere of magnification, still crouched on a flat-topped boulder on the floor of the canyon.

It was a longer shot than he normally took, and so many variables in play, even under perfect conditions. Barometric pressure. Humidity. Air density. Barrel temperature. Even Coriolis effect—the rotation of the earth. He thought he’d accounted for everything in calculating his aiming solution, but—

The creature’s head disappeared in a pink mist.

It had taken a little over four seconds for the .338 Lapua Magnum round to reach the target.

Mustin sat up, struggled to his feet.

Stretched his arms over his head.

It was midmorning. The sky steel blue and not a cloud in sight. His perch was atop a thirty-foot guard tower that had been built on the rocky pinnacle of a mountain, far above the timberline. From the open platform, he had a panoramic view of the surrounding peaks, the canyon, the forest, and the town of Wayward Pines, which from four thousand feet above, was little more than a grid of intersecting streets, couched in a protected valley.

He answered, “Mustin, over.”

“Just had a fence strike in zone four, over.”

Zone 4 encompassed the expanse of pine forest that bordered the southern edge of town. He took up his rifle and glassed the fence under the canopy of trees, tracked it for a quarter mile. He saw the smoke first—coils of it lifting off the animal’s scorched hide.

Houses appeared—colorful Victorians fronted with perfect squares of bright grass. White picket fences. He aimed down into the park where a woman pushed two children in swings. A little girl shot down the blinding glimmer of a slide.

He glassed the schoolyard.

Fighting down that familiar swell of envy.

They were oblivious. All of them. So beautifully oblivious.

He didn’t hate them. Didn’t want their life. He had long ago accepted his role as protector. Guardian. Home was a sterile, windowless room inside a mountain, and he had made as much peace with that fact as a man could hope to make. But that didn’t mean that on a lovely morning as he gazed down into what was literally the last vestige of paradise on the face of the earth, there wasn’t a pang of nostalgia. Of homesickness for what had once been.

For what would never be again.

Moving down the street, Mustin fixed his sight on a man walking quickly up the sidewalk. He wore a hunter-green shirt, brown pants, black Stetson cowboy hat.

The brass star pinned to his lapel refracted a glint of sunlight.

The man turned a corner, the crosshairs of the reticle zeroing in on his back.

Sunlight pouring down into the valley.

Pansies gemmed a planter under an open window that let the smell of a cooking breakfast waft outside.

Beads of dew steaming off the top of a black mailbox.

Ethan Burke found it tempting to linger in the moment, to pretend that everything was just as it appeared. That he lived with his wife and son in a perfect little town, where he was a well-liked sheriff. Where they had friends. A comfortable home. All needs provided for. And it was in the pretending that he’d come to fully understand how well the illusion worked. How people could let themselves succumb, let themselves disappear into the pretty lie that surrounded them.

Bells jingled over the door as Ethan entered the Steaming Bean. He stepped up to the counter and smiled at the barista, a hippie chick with blond dreads and soulful eyes.

While she started the espresso shots for his cappuccino, Ethan surveyed the shop. The regulars were all here, including two old-timers—Phillip and Clay—hunched over a chessboard. Ethan walked over, studied the game. By the looks of it, they’d been at it for a while now, each man down to a king, queen, and several pawns.

“Looks like you’re heading toward a stalemate,” Ethan said.

“Not so fast,” Phillip said. “I still got something up my sleeve.”

His opponent, a gray grizzly of a man, grinned through his wild beard across the chessboard and said, “By something, Phil means he’s going to take so damn long to move that I die and he wins by forfeit.”

Ethan moved on past a ratty sofa to a bookshelf. He ran his finger across the spines. Classics. Faulkner. Dickens. Tolkien. Hugo. Joyce. Bradbury. Melville. Hawthorne. Poe. Austen. Fitzgerald. Shakespeare. At a glance, it was just a ragtag assembly of cheap paperbacks. He pulled a slim volume off the shelf. The Sun Also Rises. The cover was an impressionistic bullfighting scene. Ethan swallowed against the lump that formed in his throat. The brittle-paged, mass-market edition of Hemingway’s first novel was probably the sole remaining copy in existence. It gave him goose bumps—awesome and tragic to hold it in his hands.

He grabbed one more book for his son and went to the counter to collect his cappuccino.

“Thanks, Miranda. I’m going to borrow these books, if that’s okay.”

“Of course.” She smiled. “Keep ’em straight out there, Sheriff.”

Ethan tipped the brim of his hat and headed for the door.

Ten minutes later, he pushed through the glass double doors under a sign that read:

OFFICE OF THE SHERIFF OF WAYWARD PINES

Reception stood empty. Nothing new there.

His secretary sat at her desk looking as bored as ever. She was playing Solitaire, laying cards down at a steady, mechanical pace.

She didn’t look up.

“How was your evening?”

She glanced up, caught off guard, an ace of spades clutched in her right hand.

It was the first time since becoming sheriff that Ethan had pushed his interaction with Belinda beyond perfunctory greetings, goodbyes, and administrative chitchat. She’d been a pediatric nurse in her past life. He wondered if she knew that he knew that.

“I was just asking how your evening was. Last night.”

“Oh.” She pulled her fingers through a long, silver ponytail. “Fine.” 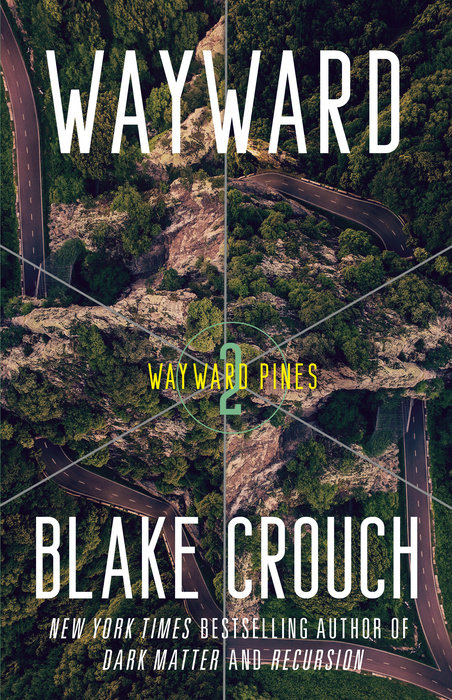