The final book of the smash-hit Wayward Pines trilogy from the New York Times bestselling author of Dark Matter, Recursion, and Upgrade

What’s inside was a nightmare. What’s outside is a thousand times worse.

Secret Service agent Ethan Burke arrived in Wayward Pines, Idaho, three weeks ago. In this town, people are told who to marry, where to live, where to work. No one is allowed to leave; even asking questions can get you killed.

But Ethan has discovered the astonishing secret of what lies beyond the electrified fence that surrounds Wayward Pines and protects it from the terrifying world beyond. And now that secret is about to come storming through the fence to wipe out this last, fragile remnant of humanity.

The Last Town at last pitches Ethan Burke and his fellow residents into all-out war against the forces outside the town’s gates—and in doing so delivers every bit the riotously horrific, breathlessly action-packed conclusion that the Wayward Pines trilogy deserves.

An excerpt from The Last Town

The house was so damn dark.

Jennifer tried the kitchen light out of instinct, but nothing happened.

She felt her way around the fridge to the cabinet over the stove, opened it, and grabbed the crystal candlestick holder, a candle, and the box of matches. She turned on the gas and struck a match to the back burner and set the teakettle over the hissing blue flame.

Lighting what was left of the candle, she sat down at the breakfast table.

In her life before, she’d been a pack-a-day smoker, and God could she use a cigarette right now—something to steady her nerves and her hands, which wouldn’t stop trembling.

As her eyes filled with tears, the candlelight fractured.

All she could think of was her husband, Teddy, and how far apart she felt from him.

She’d always harbored hope that the world was still out there. Beyond the fence. Beyond this nightmare. That her husband was still out there. Her home. Her job at the university. On some level, it was that hope that had gotten her by all these years. Hope that one day she might wake up back in Spokane. Teddy would be lying beside her, still sleeping, and this place—Wayward Pines—would all have been a dream. She would slip quietly out of bed and go into the kitchen and cook him eggs. Brew a pot of strong coffee. She would be waiting for him at the breakfast table when he stumbled out of bed in that disgusting robe, disheveled and sleepy and everything she loved. She’d say, “I had the strangest dream last night,” but as she’d try to explain it, all that she’d experienced in Wayward Pines would slip back into the fog of forgotten dreams.

She’d just smile across the table at her husband and say, “I lost it.”

Now, her hope was gone.

The loneliness was staggering.

But underneath it simmered anger.

Anger that this had been done to her.

Rage at all the loss.

The teakettle began to whistle.

She struggled to her feet, her mind racing.

Lifting the kettle off the flame, the whistling died away, and she poured the boiling water into her favorite ceramic mug in which she kept a tea infuser perpetually filled with chamomile leaves. Tea in one hand, candle in the other, she moved out of the dark kitchen and into the hallway.

Most of the town was still down at the theater, reeling from the sheriff’s revelation, and maybe she should’ve stayed with everyone else; but the truth of it was that she wanted to be alone. Tonight, she just needed to cry in bed. If sleep came, great, but she wasn’t exactly expecting it.

She turned the corner at the bannister and started up the creaking stairs, candlelight flickering across the walls. The power had gone out several times before, but she couldn’t escape the feeling that tonight of all nights meant something.

The fact that she’d locked every door and every window gave her some small—very small—peace of mind.

Ethan stared up at twenty-five feet of steel pylons and spiked conductors wrapped in coils of razor wire. The fence usually hummed with enough current to electrocute a person one thousand times over. So loud you could hear it a hundred yards away and feel it in your fillings at close proximity.

Shreds of mist skirted past like the front edge of an approaching storm, and Ethan gazed out into the black woods beyond the fence. Over the pounding of his heart, he heard shrieks beginning to echo in the forest.

The abbies were on their way.

David Pilcher’s final words to him were set on repeat.

This was Ethan’s fault.

He’d made the mistake of calling that psychof**k’s bluff.

And telling people the truth.

And now everyone in town, his wife and son included, was going to die.

Ethan sprinted back through the forest, the panic growing with every stride, every desperate breath. He weaved between the pines, now running alongside the quiet fence.

His Bronco lay just ahead and already the screams were louder, closer.

Jumping in behind the wheel, he cranked the engine and sped off into the trees, pushing the suspension package to the limit and jarring the last few jags of glass out of what was left of the windshield.

He reached the road that looped back into town and roared up the embankment, back onto pavement.

Pinned the gas pedal to the floorboard.

He shot out of the trees and raced beside a pasture.

High beams blazed across the billboard at the edge of town, showing a family of four waving, smiling those carefree 1950s shit-eating grins over the slogan:

WHERE PARADISE IS HOME

If they were lucky, the abbies would reach the dairy first, slaughtering their way through the cattle before tearing into town.

The outskirts of Wayward Pines.

On a clear day, the town defined perfection. Neat blocks of brightly colored Victorian houses. White picket fences. Lush, green grass. Main Street looked like something built for tourists to wander down and dream of retiring here to live the good life. The quaint life. The mountain walls that surrounded the town promised shelter and security. At first blush, nothing about it felt like a place you couldn’t leave—a place where you’d be killed for even trying.

Ethan turned onto Tenth Avenue and screamed through seven blocks before ripping out onto Main so hard the right-side wheels lifted off the ground.

Up ahead, at the intersection of Main and Eighth, the entire town stood where he’d left them—out in front of the opera house. Four hundred and something souls waiting around in the dark like they’d been kicked out of a ball en masse, still dressed in their ridiculous costumes from the fête.

Ethan shut off the car and climbed out.

It was eerie to see Main Street in the dark, all that storefront glass lit only by torchlight.

There was the Steaming Bean.

The noise of the crowd was overwhelming.

People were emerging from their disbelief and shock in the wake of Ethan’s decision to tell them all the truth about Wayward Pines. Beginning to talk to one another, in some ways, for the first time.

Kate Ballinger hurried over. It was Kate and her husband, Harold, who’d been on the execution block for tonight’s fête, whose lives Ethan’s revelation had momentarily saved. Somebody had done a fast-stitch job on the gash above her left eye, but her face was still streaked with blood, which had also matted her prematurely white hair. Kate’s disappearance in Wayward Pines had brought Ethan to this town two thousand years ago. In another lifetime, they had worked together in the Secret Service. They’d been partners. For a brief, scorching window, they’d been more than partners.

Ethan took Kate by the arm and hustled her around to the back of the Bronco, out of earshot from the crowd. She’d almost died tonight, and as Ethan stared down at her, he could see in her eyes that she was holding everything together by a fraying thread.

He said, “Pilcher killed the power.”

“No, I mean he killed the power to the fence as well. He opened the gate.”

She studied Ethan, as if trying to process exactly how bad a piece of news she’d just received.

“They can walk right into town now. And they’re coming. I heard them at the fence.”

“I don’t know. Even a small group would be catastrophic.”

Kate glanced back at the crowd.

The conversations were dying out, people edging closer to hear the news.

“Some of us have weapons,” she said. “A few have machetes.”

“Can’t you reason with Pilcher? Call him back? Change his mind?”

“We’re past that point.” 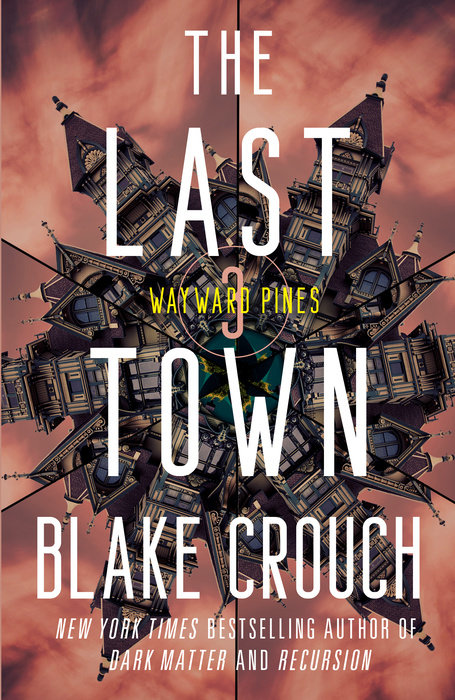