A century-old mystery—and a desperate battle to survive—unfold in this standalone thriller from the New York Times bestselling author of Dark Matter and Recursion.

On Christmas Day in 1893, every man, woman, and child in a remote mining town disappeared, belongings forsaken, meals left to freeze in vacant cabins, and not a single bone found.

Now, journalist Abigail Foster and her historian father have set out to explore the long-abandoned town and learn what happened. With them are two backcountry guides—along with a psychic and a paranormal photographer who are there to investigate rumors that the town is haunted.

But Abigail and her companions are about to learn that the town’s ghosts are the least of their worries. Twenty miles from civilization, with a blizzard bearing down, they realize they are not alone.

The ordeal that follows will test this small team past the breaking point as they battle the elements and human foes alike—and discover that the town’s secrets still have the power to kill.

An excerpt from Abandon

Abigail Foster stared through the windshield at the expired parking meter. Her fingers strangled the steering wheel, knuckles blanching, hands beginning to cramp. This had all seemed like such a good idea a month ago back in New York when she’d pitched the article to Margot, her editor at Great Outdoors. Now, on the verge of seeing him for the first time in twenty-six years, she realized she’d done herself the disservice of glossing over this moment and the fact that she’d have to walk into that building and face him.

Her watch showed five minutes to seven, which meant it was five to five, Mountain Time. She’d sat in this parking space for twenty minutes, and he was probably about to leave, thinking she’d decided not to come. The hostess showed her toward the back of the brewpub, which at five in the afternoon stood mostly empty. Peanut shells littered the floor, crunching beneath the heels of her black pumps, and the reek of brewing beer infused the air with a yeasty sourness. The hostess held the back door open and motioned to the only occupied table on the patio.

Abigail stepped outside, smoothed the Cavalli skirt she’d paid way too much for last year in Milan.

The doubt resurfaced. She shouldn’t have come. No story was worth this.

He sat alone with his back to her at a west-facing table, with the town of Durango, Colorado, spread out before him in its high valley, specked with the bright yellows of cottonwood and aspen, enclosed by pine-wooded hills and bare shale hills and, farther back, the spruce forests and jagged peaks of the San Juans.

The sound of the patio door banging shut caught his attention. He looked over his shoulder, and at the sight of her, slid his chair back from the table and stood—tall, sturdy, wavy silver hair, dark blues, and dressed like something out of Backpacker magazine—plaid Patagonia button-up shirt tucked into a comfortable pair of jeans, Teva sandals.

She felt that knot constricting in her stomach again, noticed his left hand trembling. He seized the chair he’d been sitting in to steady it.

She knew he was fifty-two, but he’d aged even better than his photo on the history department’s website indicated.

No handshake, no hug, just five seconds of what Abigail ranked as the most excruciating eye contact she’d ever held.

Easing down into a chair, she counted three empty pints on the table, wished she’d had the benefit of alcohol to steel herself for this meeting.

She rifled through her purse, found her sunglasses. It was Halloween, and though the air carried a chill, at this elevation the intensity of direct sunlight made it pleasant to sit outdoors.

A waiter costumed as a hula dancer approached the table.

“They have a bunch of different—”

“I don’t care. Something light.”

He said to the waiter, “Bring her a Rock Hopped Pale.”

The whistle of a steam-powered locomotive blew somewhere up the valley. Abigail saw the plume of smoke in the distance, heard the chugging palpitations of the valve gears as the train steamed south through the heart of town.

“I don’t have any backpacking gear,” she said.

“Scott will outfit you.”

The silence, uncomfortable as it came, crawled under her skin. “Pretty town you have here.”

She couldn’t help thinking this didn’t feel anything like she’d imagined it would. Having run countless versions of this moment through her head, they’d all carried more gravitas. She would scream at him. She’d hit him. They’d break down and cry together. He’d apologize. She’d accept. She wouldn’t. Now she understood none of that would happen.

They were just two people sharing a table, trying to limp through the awkwardness.

“I’ve followed your journalism career, subscribe to all the magazines you contribute to, and I thought this . . . expedition . . . might be good fodder for your—”

“But you haven’t been interested in helping me since I was four years old.”

Lawrence slugged back the rest of his dark beer, stared at the mountains, wiped the foam from his beard.

Abigail said, “That came out more angry than—”

“No, it’s fine. You’ve got standing to be as angry as you want.”

The patio door opened and the waiter returned with Abigail’s pint and another round for Lawrence.

When he’d left, she raised her glass.

They clinked pints and Abigail sipped her golden beer.

“So why’d you come?” Lawrence asked. “To be honest, I never expected a response to that email.”

“Funny, I was just sitting out in the car, building the nerve to walk in here, and trying to answer that question for myself.”

The sun ducked behind the mountains and Abigail shivered, the rocky slopes and snowfields blushing with alpenglow. 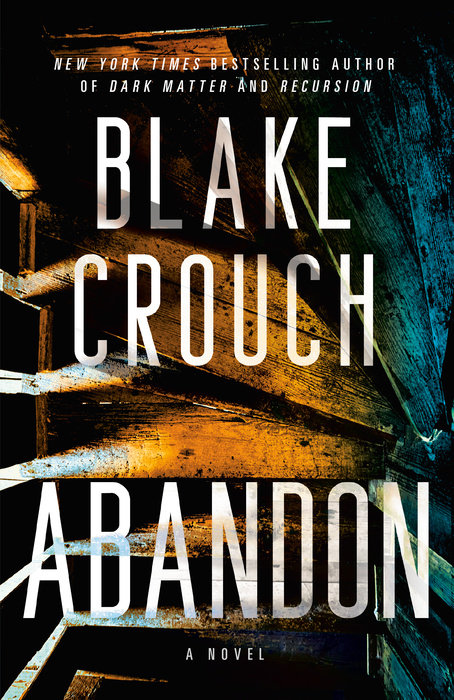