How Bill Walsh Reinvented Football and Created an NFL Dynasty

The Genius is the gripping account of Bill Walsh’s career and how, through tactical and organizational skill, he transformed the San Francisco Forty Niners from a fallen franchise into a football dynasty. Along with his right-hand man John McVay, Walsh built the foundation for this success by drafting or trading for a durable core of stars, including Joe Montana, Fred Dean, and Hacksaw Reynolds. (Walsh would later restock the team with such players as Jerry Rice, Steve Young, and Charles Haley.) The key to Walsh’s genius perhaps lay in his keen understanding of his athletes’ psyches–he knew what brought out the best in each of them. With unmatched access to players, fellow coaches, executives, beat reporters, and Walsh himself, David Harris recounts the whole story–including Walsh’s pre-Niners odyssey, the demons that pushed him throughout his career, and the scope of his impact on the game beyond the field and locker room. In the end, Harris reveals the brilliant man behind the coaching legend.

An excerpt from The Genius

1
“A LITTLE BIT OF DIGNITY AND CLASS”

It all began with “Mr. D.,” though in the fall of 1978 few in the nine Bay Area counties used such terms of endearment when identifying Edward J. DeBartolo Jr., the hapless owner of their favorite football team. Nor was he yet referred to with the more hip “Eddie D.,” or even the double- edged “Junior.” Instead, it was “that rich kid whose daddy bought him a football team” or “that mafioso dipstick who destroyed the Niners” or, for short, “that asshole.” Every fan within two hours’ drive of San Francisco knew who you meant. DeBartolo had joined the NFL in the spring of 1977 as its youngest franchise owner, hoping to become a man of stature in the sports world, bringing honor on his family while realizing his own deeply held aspirations for belonging, triumph, and acclaim. So far, however, Eddie— barely thirty- two years old, short, pudgy, and in charge for the first time in his life—was a complete flop. And he finally figured out late that fall that he had to do something radical to reverse the situation before it was too late.

The most personally trying element in Eddie D.’s dilemma was his fear of disappointing his father, Edward J. DeBartolo Sr., the original “Mr. D.,” who was described by his son as close enough to him to be “like my brother.” DeBartolo Sr., now sixty- nine, was the architect of the family fortune. Born in the impoverished “Hollow” neighborhood in Youngstown, Ohio, in 1909, three months after the death of his natural father, Anthony Paonessa, “Senior” had taken the family name of his stepfather—an immigrant who neither read nor wrote English—and followed him into the concrete contracting business. Then, at the insistence of his mother, Senior worked his way through engineering school at the University of Notre Dame during the Depression by laboring all night at construction sites. He rejoined his stepfather’s Youngstown contracting business until the Second World War, when he was drafted into the Army Corps of Engineers for the duration. Senior returned from the war with an officer’s commission and a $1,500 nest egg reportedly won in military crap games, which he used to capitalize the Edward J. DeBartolo Corporation shortly after his first child and only son was born.

DeBartolo Sr. threw his new enterprise into the still-infant shopping center business and developed some of the first malls at a time when there were fewer than a dozen in the entire United States. Eventually his company built the largest enclosed shopping mall ever, as well as hundreds of similar properties in more than a dozen states, ranking as the nation’s largest shopping center developer by the time the 1970s began. He also acquired several banks, numerous hotels, three horse racing tracks, the Pittsburgh franchise in the National Hockey League, and some seventy other subsidiary enterprises, all headquartered in Youngstown.

By the time Eddie fell on his face out in San Francisco, the privately held DeBartolo family business was worth at least $400 million and Edward Sr. would soon be listed in the Forbes 400 directory of the wealthiest Americans. He was also suspected of Mafia connections, largely because he was a rich Italian contractor from Youngstown. Eddie’s father dismissed the innuendo with great annoyance. “This kind of talk is the curse of anyone successful whose name ends in an i or an o,” he complained. “I got where I am by working my ass off every day of my life. I could have turned to certain characters in this town. I’m not saying I don’t know them. But I solved my own problems.”

Edward Sr. was the archetypal patriarch—almost as short as his son but thin, quiet, dignified, and always dressed in a dark suit. One friend who had known him for forty years said he had seen Eddie’s father only twice without a tie, both times when he was wearing swimming trunks. In public he kept his tongue but in private was known to swear like a teamster. Such was the original Mr. D.’s stature around Youngstown that a thief who stole his briefcase returned it untouched as soon as he discovered who owned it. In more than forty years of working, Senior had never taken a vacation, and if he wasn’t traveling he was always home for dinner at the end of his customary fourteen- hour shift. He started his day at five- thirty over a Styrofoam cup full of coffee, usually with Eddie. Senior’s idea of a good time was to watch three televisions side by side, tuned to three different football games. His corporation’s two- story brick headquarters in suburban Youngstown was just down the road from his enormous house and from his son’s of similar size. When Senior traveled, he used one of the corporation’s three Learjets—flying more than five hundred hours a year—and was surrounded by a small swarm of aides charged with executing the decisions he made on the spot. Upon his return, his son greeted him with a kiss.

Not surprisingly, Junior grew up wanting to be Senior more than he wanted to be anybody else. The expectations Eddie put on himself with that identification were “brutal,” he would later admit. “It almost broke up my marriage before I realized I can’t fill those big shoes. I can’t be Edward DeBartolo Sr. and I don’t have to be. I have to carry on a tradition, not an identity, and I’ll do that in a different way. He’s helped me by letting me handle things my own way, to be my own man.” During the fall of 1978, however, that evolution was still very much in process.

According to Eddie, his greatest gift from his father was “the common man’s touch,” largely passed on during his childhood in Youngstown. Halfway between Pittsburgh and Cleveland, the DeBartolos’ hometown had once hosted a legion of steel mills, fabricators, and blast furnaces, many of which were empty and rusting by the time Eddie got into the football business. And football was also part of his Youngstown inheritance. No region in America was more wedded to the game than the industrial Midwest and, rich or not, the DeBartolo scion was anything but an exception. He played on the junior varsity squad during his freshman year at Youngstown’s Cardinal Mooney High School, but, still an inch and a half and several pounds short of his adult five feet seven and a half inches and 160 pounds, he was doomed as a player. Junior swallowed his disappointment and settled for making a lot of working- class buddies from the team who became regulars at the DeBartolo mansion for games of pool. Because he wanted to be just one of the guys, Eddie D.’s only distinguishing feature as a teenager was his sartorial flair. “Eddie came up the easy way,” one of the Mooney High School faculty remembered, “but, other than his clothes, he never showed it.” Even when he was an adult, one of Eddie’s closest friends was a foundry worker from his JV days.

After Cardinal Mooney, Junior followed his father’s footsteps to Notre Dame but Senior still kept track of him, using a contact in the football program to give him updates on how his son was doing. After graduating with a degree in business, Eddie was moved into the corporation and shuffled through assignments to learn all the company’s functions. At each stop, other corporation executives were tasked with reporting to his father about the son. When on assignment in Dayton, Eddie reprised his Youngstown days and began hanging out with a group of players from the University of Dayton football team. He married his high school sweetheart along the way, fathered three daughters, and had just been named the family corporation’s executive in charge of sports operations when the DeBartolos began pursuing the possibility of purchasing the Forty Niners early in 1977. The year before, they had made an unsuccessful $16 million bid in the auction to secure rights to the NFL expansion franchise in Tampa, Florida, a state where DeBartolo Corp. had numerous business interests.

By then, Eddie had begun the process of becoming his “own man,” and, though often imitative of Senior down to the smallest details, Eddie’s “own man” was also anything but a carbon copy. For starters, Junior was every inch the party animal that Senior was not. One acquaintance who enjoyed Eddie’s typical restaurant hospitality recalled, “There was just bottle after bottle. I finally had to stop drinking because I couldn’t function, but Eddie and his buddies just kept going.” The younger DeBartolo also had a serious attachment to gambling, especially at the tables in Las Vegas, where he would soon establish a reputation as a high roller. Dressed to the nines in very expensive Italian suits, Edward DeBartolo Jr. “loved life,” one Forty Niners employee explained, “and loved living it.” When traveling for pleasure, he usually brought along an entourage of his Youngstown buddies and was rarely seen without his bodyguard, Leo, a very large man with a bump under his armpit where he kept his pistol.

“Eddie may not have been a gangster,” one San Franciscan remembered, “but he sure looked like one when he rolled into town.”

David Harris is the author of ten books–including The Genius and his widely acclaimed study of the professional football business, The League–and a former contributing editor at The New York Times Magazine and Rolling Stone. He has been a Forty Niners fan since he was ten and first crossed paths with Bill Walsh as a Stanford student in the 1960s. He lives in the San Francisco Bay Area.

How Bill Walsh Reinvented Football and Created an NFL Dynasty 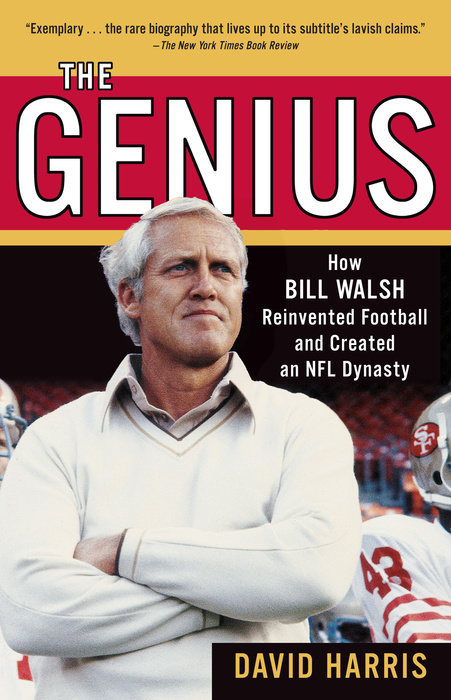