The yuletide revival of a vintage Twin Cities radio serial isn't just for fun--dealing as it does with the scandalous unsolved 1950s murder of beautiful Kay Collins. But an even deeper mystery intrigues radio personality Bram Baldric and his sleuthing wife, Sophie Greenway: Why has the station's owner insisted on airing this particular case when her son--Kay Collins's two-timing lover--happened to have been the prime suspect in it? Merriment and mistletoe are out this Christmas; menace and murder are in.

An excerpt from Murder in the Air

“She bought the damned radio station!” announced Bram, dumping himself into a chair on the other side of his wife’s desk. It was nearly four-thirty in the afternoon, exactly four weeks before Christmas. After entering her office at the Maxfield Plaza, St. Paul’s most famous downtown hotel, he’d tossed his camel wool coat on the sofa, but had forgotten to remove a red wool scarf. It was still wound snugly around his neck.

“I already know,” said Sophie, organizing some file folders into a lower drawer. She eyed her husband warily, knowing that the flush climbing his cheeks wasn’t because the scarf was cutting off circulation.

“How could you possibly know the station had been bought? I just found out myself a couple of hours ago.”

Sophie could read the frustration in his voice. Bram had one of the most expressive radio voices in the country. That, and his freely expressed opinions, were all part of what made him such a great talk-show host. “Well, actually, dear, Heda Bloom checked into the hotel this afternoon—complete with a bodyguard, her personal secretary, and four trunks of clothes.”

“Afraid so. As a matter of fact, I gave her the executive suite directly across from our apartment. For the duration of her visit, we’re going to be neighbors.”

Bram’s expressive voice failed him. “Ugh,” was all he could squeeze out.

“I tried to call you with the news, but you weren’t in your office. I didn’t think I should leave a message. It’s not bad news, is it? I mean, she’s such a nice woman.”

“A nice woman,” he repeated, leaning forward and running his fingers absently through his graying temples. “I’ll be sure to remember that when I’m standing in line at the unemployment office.”

Sophie assumed he was joking. “You know,” she continued, glancing at a newly framed snapshot of her mom and dad standing in front of the Eiffel Tower—they were currently on a round-the-world tour. “My parents knew the Blooms back in the Fifties, when they owned WPXL. That was before Dad bought the Maxfield.”

“I even met Justin Bloom once.”

“I grew up in Chicago, Soph. We thought of St. Paul as a suburb—and not a very interesting one at that.”

“You may be in a bad mood, dear, but you don’t have to insult my hometown.” She fussed indignantly with her short, reddish gold hair.

“Just finish the story. If he’s related to my new boss, I want to hear it.”

“Well,” said Sophie, folding her arms over her chest, “if I recall correctly, Justin Bloom killed a woman by the name of Kay Collins back in the late Fifties. It was a real cause célèbre in the Twin Cities. He was engaged to someone else at the time, but the reports said the woman he murdered was his lover.”

“No kidding.” He stopped fidgeting with his tie clasp and gave her his full attention. “What happened to him?”

“Nothing. He fled the country. I was just a kid at the time, but I remember my parents talking about it. The police kept the heat on him all over Europe. Eventually, I suppose, it just got to be old news and we didn’t hear about it anymore. But as far as I know, he was never caught.”

“Fascinating.” Bram scratched his chin. “How was he related to Heda Bloom?”

“He was her son. Seems to me there was another son, too. I don’t recall the name. Her husband, Cedric, died about a year after Justin committed the murder. I remember my parents saying he probably died of shame.”

“That must have been rough.” Unwinding the scarf from around his neck, Bram added, “I wonder if he really did it.”

“Oh, he did it, all right. There was an eyewitness. A police officer.”

“I guess my new boss has a few skeletons in her closet.” His manner grew distracted as he glanced at his watch.

Sophie assumed that when he’d walked into her office, he was home for the night. “Do you have to get back to the station?”

“Afraid so. It’s a command performance. Heda is going to meet with us at five and give us all our walking papers.”

She hadn’t taken his agitation seriously before, but she certainly did now. “Bram, you have a contract.”

“Contracts were made to be broken.” He rose and walked to the window overlooking the garden area between the two towers, where mounds of snow now covered the ground. As he pressed his hand to the cold glass, Sophie moved up behind him, rested her head against his back, and slipped her arms gently around his waist.

“They’ve already put up the Christmas lights in the garden,” he said, unable to keep the melancholy out of his voice.

“Every year. Right after Thanksgiving. It’s tradition at the Maxfield.”

He was quiet for several seconds. “They look … pretty.”

“Everything’s going to be all right, sweetheart. She won’t fire you. Your ratings are the highest in the Twin Cities.”

“You can’t argue with a pink slip.”

“But you don’t know for sure that’s what the meeting’s about. She never said anything to me about letting you go.”

He turned around. “I have to prepare myself for the worst, Soph. New owners like to bring in new talent. The problem is, I’m not fit to do anything else. And, since you run this hotel now, it’s not as if we can move to another city so that I can pursue my career elsewhere.”

That stung. In the eight years they’d been married, career conflict had never been an issue before. True, Sophie loved running the Maxfield—every bit as much as Bram loved his job. In September, she’d inherited the hotel from her parents. Henry and Pearl Tahtinen had announced their retirement at a birthday celebration, passed the reins—and the ownership—of the hotel on to Sophie the next day, and then immediately took off for Finland. Eager to leave a job that no longer held her interest, Sophie tendered her resignation at an arts magazine and, in early November, began her new career in the hospitality business.

“I wonder if I could learn to sell aluminum siding?” said Bram listlessly, his chin sinking to his chest.

Sometimes he was such a drama queen, thought Sophie. “Surely Heda Bloom wouldn’t buy a station and then institute some hideous shake-up. She’s a professional, sweetheart. She owns many other radio stations around the country.” Then again, what did Sophie know about the radio biz?

“Will you come back as soon as you’re done?”

“Sure.” He said the word a little too quickly.

The tension surrounding him unsettled her. She couldn’t remember when he’d ever been this upset. After helping him on with his coat, she straightened his tie and then took hold of his lapels, drawing him close. “You’re not going to be fired, sweetheart. Trust me. I have a sixth sense about these things.”

“You’ll probably come back with a big fat raise.”

He kissed the top of her head. “Hold that thought.” Squaring his shoulders like a man readying himself for battle, he walked to the door and, with a less-than-enthusiastic wave, left without a backward glance. 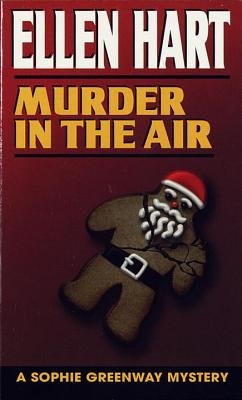