The Science Classic Made More Accessible

Stephen Hawking’s worldwide bestseller A Brief History of Time remains a landmark volume in scientific writing. But for years readers have asked for a more accessible formulation of its key concepts—the nature of space and time, the role of God in creation, and the history and future of the universe. A Briefer History of Time is Professor Hawking’s response.

Although “briefer,” this book is much more than a mere explanation of Hawking’s earlier work. A Briefer History of Time both clarifies and expands on the great subjects of the original, and records the latest developments in the field—from string theory to the search for a unified theory of all the forces of physics. Thirty-seven full-color illustrations enhance the text and make A Briefer History of Time an exhilarating and must-have addition in its own right to the great literature of science and ideas.

An excerpt from A Briefer History of Time


Thinking About the Universe

We live in a stragne and wonderful universe. Its age, size, violence, and beauty require extraordinary imagination to appreciate. The place we humans hold within this vast cosmos can seem pretty insignificant. And so we try to make sense of it all and to see how we fit in. Some decades ago, a well-known scientist (some say it was Bertrand Russell) gave a public lecture on astronomy. He described how the earth orbits around the sun and how the sun, in turn, orbits around the center of a vast collection of stars called our galaxy. At the end of the lecture, a little old lady at the back of the room got up and said: "What you have told us is rubbish. The world is really a flat plate supported on the back of a giant turtle." The scientist gave a superior smile before replying, "What is the turtle standing on?" "You're very clever, young man, very clever," said the old lady. "But it's turtles all the way down!"

Most people nowadays would find the picture of our universe as an infinite tower of turtles rather ridiculous. But why should we think we know better? Forget for a minute what you know-or think you know-about space. Then gaze upward at the night sky. What would you make of all those points of light? Are they tiny fires? It can be hard to imagine what they really are, for what they really are is far beyond our ordinary experience. If you are a regular stargazer, you have probably seen an elusive light hovering near the horizon at twilight. It is a planet, Mercury, but it is nothing like our own planet. A day on Mercury lasts for two-thirds of the planet's year. Its surface reaches temperatures of over 400 degrees Celsius when the sun is out, then falls to almost -200 degrees Celsius in the dead of night. Yet as different as Mercury is from our own planet, it is not nearly as hard to imagine as a typical star, which is a huge furnace that burns billions of pounds of matter each second and reaches temperatures of tens of millions of degrees at its core.

Another thing that is hard to imagine is how far away the planets and stars really are. The ancient Chinese built stone towers so they could have a closer look at the stars. It's natural to think the stars and planets are much closer than they really are-after all, in everyday life we have no experience of the huge distances of space. Those distances are so large that it doesn't even make sense to measure them in feet or miles, the way we measure most lengths. Instead we use the light-year, which is the distance light travels in a year. In one second, a beam of light will travel 186,000 miles, so a light-year is a very long distance. The nearest star, other than our sun, is called Proxima Centauri (also known as Alpha Centauri C), which is about four light-years away. That is so far that even with the fastest spaceship on the drawing boards today, a trip to it would take about ten thousand years.

Ancient people tried hard to understand the universe, but they hadn't yet developed our mathematics and science. Today we have powerful tools: mental tools such as mathematics and the scientific method, and technological tools like computers and telescopes. With the help of these tools, scientists have pieced together a lot of knowledge about space. But what do we really know about the universe, and how do we know it? Where did the universe come from? Where is it going? Did the universe have a beginning, and if so, what happened before then? What is the nature of time? Will it ever come to an end? Can we go backward in time? Recent breakthroughs in physics, made possible in part by new technology, suggest answers to some of these long-standing questions. Someday these answers may seem as obvious to us as the earth orbiting the sun-or perhaps as ridiculous as a tower of turtles. Only time (whatever that may be) will tell.


Our Evolving Picture of the Universe

ALTHOUGH AS LATE AS THE TIME of Christopher Columbus it was common to find people who thought the earth was flat (and you can even find a few such people today), we can trace the roots of modern astronomy back to the ancient Greeks. Around 340 B.C., the Greek philosopher Aristotle wrote a book called On the Heavens. In that book, Aristotle made good arguments for believing that the earth was a sphere rather than flat like a plate.

One argument was based on eclipses of the moon. Aristotle realized that these eclipses were caused by the earth coming between the sun and the moon. When that happened, the earth would cast its shadow on the moon, causing the eclipse. Aristotle noticed that the earth's shadow was always round. This is what you would expect if the earth was a sphere, but not if it was a flat disk. If the earth were a flat disk, its shadow would be round only if the eclipse happened at a time when the sun was directly under the center of the disk. At other times the shadow would be elongated-in the shape of an ellipse (an ellipse is an elongated circle).

The Greeks had another argument for the earth being round. If the earth were flat, you would expect a ship approaching from the horizon to appear first as a tiny, featureless dot. Then, as it sailed closer, you would gradually be able to make out more detail, such as its sails and hull. But that is not what happens. When a ship appears on the horizon, the first things you see are the ship's sails. Only later do you see its hull. The fact that a ship's masts, rising high above the hull, are the first part of the ship to poke up over the horizon is evidence that the earth is a ball.

The Greeks also paid a lot of attention to the night sky. By Aristotle's time, people had for centuries been recording how the lights in the night sky moved. They noticed that although almost all of the thousands of lights they saw seemed to move together across the sky, five of them (not counting the moon) did not. They would sometimes wander off from a regular east-west path and then double back. These lights were named planets-the Greek word for "wanderer." The Greeks observed only five planets because five are all we can see with the naked eye: Mercury, Venus, Mars, Jupiter, and Saturn. Today we know why the planets take such unusual paths across the sky: though the stars hardly move at all in comparison to our solar system, the planets orbit the sun, so their motion in the night sky is much more complicated than the motion of the distant stars.

Aristotle thought that the earth was stationary and that the sun, the moon, the planets, and the stars moved in circular orbits about the earth. He believed this because he felt, for mystical reasons, that the earth was the center of the universe and that circular motion was the most perfect. In the second century a.d. another Greek, Ptolemy, turned this idea into a complete model of the heavens. Ptolemy was passionate about his studies. "When I follow at my pleasure the serried multitude of the stars in their circular course," he wrote, "my feet no longer touch the earth."

In Ptolemy's model, eight rotating spheres surrounded the earth. Each sphere was successively larger than the one before it, something like a Russian nesting doll. The earth was at the center of the spheres. What lay beyond the last sphere was never made very clear, but it certainly was not part of mankind's observable universe. Thus the outermost sphere was a kind of boundary, or container, for the universe. The stars occupied fixed positions on that sphere, so when it rotated, the stars stayed in the same positions relative to each other and rotated together, as a group, across the sky, just as we observe. The inner spheres carried the planets. These were not fixed to their respective spheres as the stars were, but moved upon their spheres in small circles called epicycles. As the planetary spheres rotated and the planets themselves moved upon their spheres, the paths they took relative to the earth were complex ones. In this way, Ptolemy was able to account for the fact that the observed paths of the planets were much more complicated than simple circles across the sky.

Ptolemy's model provided a fairly accurate system for predicting the positions of heavenly bodies in the sky. But in order to predict these positions correctly, Ptolemy had to make an assumption that the moon followed a path that sometimes brought it twice as close to the earth as at other times. And that meant that the moon ought sometimes to appear twice as big as at other times! Ptolemy recognized this flaw, but nevertheless his model was generally, although not universally, accepted. It was adopted by the Christian church as the picture of the universe that was in accordance with scripture, for it had the great advantage that it left lots of room outside the sphere of fixed stars for heaven and hell.

LEONARD MLODINOW received his PhD in theoretical physics from the University of California, Berkeley, was an Alexander von Humboldt Fellow at the Max Planck Institute, and was on the faculty of the California Institute of Technology. His previous books include the best sellers The Grand Design and A Briefer History of Time (bother with Stephen Hawking), Subliminal (winner of the PEN/E. O. Wilson Literary Science Writing Award), and War of the Worldviews (with Deepak Chopra), as well as Elastic, Euclid’s Window, Feynman’s Rainbow, and The Upright Thinkers.

The Science Classic Made More Accessible 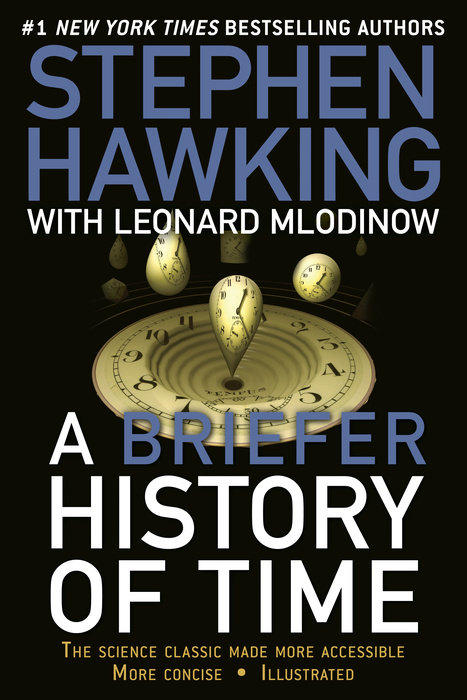