Why Some Ideas Survive and Others Die

NEW YORK TIMES BESTSELLER • The instant classic about why some ideas thrive, why others die, and how to make your ideas stick.

“Anyone interested in influencing others—to buy, to vote, to learn, to diet, to give to charity or to start a revolution—can learn from this book.”—The Washington Post

Mark Twain once observed, “A lie can get halfway around the world before the truth can even get its boots on.” His observation rings true: Urban legends, conspiracy theories, and bogus news stories circulate effortlessly. Meanwhile, people with important ideas—entrepreneurs, teachers, politicians, and journalists—struggle to make them “stick.”

In Made to Stick, Chip and Dan Heath reveal the anatomy of ideas that stick and explain ways to make ideas stickier, such as applying the human scale principle, using the Velcro Theory of Memory, and creating curiosity gaps. Along the way, we discover that sticky messages of all kinds—from the infamous “kidney theft ring” hoax to a coach’s lessons on sportsmanship to a vision for a new product at Sony—draw their power from the same six traits.

Made to Stick will transform the way you communicate. It’s a fast-paced tour of success stories (and failures): the Nobel Prize-winning scientist who drank a glass of bacteria to prove a point about stomach ulcers; the charities who make use of the Mother Teresa Effect; the elementary-school teacher whose simulation actually prevented racial prejudice.

Provocative, eye-opening, and often surprisingly funny, Made to Stick shows us the vital principles of winning ideas—and tells us how we can apply these rules to making our own messages stick.

An excerpt from Made to Stick

A friend of a friend of ours is a frequent business traveler. Let’s call him Dave. Dave was recently in Atlantic City for an important meeting with clients. Afterward, he had some time to kill before his flight, so he went to a local bar for a drink.
He’d just finished one drink when an attractive woman approached and asked if she could buy him another. He was surprised but flattered. Sure, he said. The woman walked to the bar and brought back two more drinks—one for her and one for him. He thanked her and took a sip. And that was the last thing he remembered.
Rather, that was the last thing he remembered until he woke up, disoriented, lying in a hotel bathtub, his body submerged in ice.
He looked around frantically, trying to figure out where he was and how he got there. Then he spotted the note: don’t move. call 911.
A cell phone rested on a small table beside the bathtub. He picked it up and called 911, his fingers numb and clumsy from the ice. The operator seemed oddly familiar with his situation. She said, “Sir, I want you to reach behind you, slowly and carefully. Is there a tube protruding from your lower back?”
Anxious, he felt around behind him. Sure enough, there was a tube.
The operator said, “Sir, don’t panic, but one of your kidneys has been harvested. There’s a ring of organ thieves operating in this city, and they got to you. Paramedics are on their way. Don’t move until they arrive.”

You’ve just read one of the most successful urban legends of the past fifteen years. The first clue is the classic urban-legend opening: “A friend of a friend . . .” Have you ever noticed that our friends’ friends have much more interesting lives than our friends themselves?
You’ve probably heard the Kidney Heist tale before. There are hundreds of versions in circulation, and all of them share a core of three elements: (1) the drugged drink, (2) the ice-filled bathtub, and (3) the kidney-theft punch line. One version features a married man who receives the drugged drink from a prostitute he has invited to his room in Las Vegas. It’s a morality play with kidneys.
Imagine that you closed the book right now, took an hourlong break, then called a friend and told the story, without rereading it. Chances are you could tell it almost perfectly. You might forget that the traveler was in Atlantic City for “an important meeting with clients”—who cares about that? But you’d remember all the important stuff.
The Kidney Heist is a story that sticks. We understand it, we remember it, and we can retell it later. And if we believe it’ s true, it might change our behavior permanently—at least in terms of accepting drinks from attractive strangers.
Contrast the Kidney Heist story with this passage, drawn from a paper distributed by a nonprofit organization. “Comprehensive community building naturally lends itself to a return-on-investment rationale that can be modeled, drawing on existing practice,” it begins, going on to argue that “[a] factor constraining the flow of resources to CCIs is that funders must often resort to targeting or categorical requirements in grant making to ensure accountability.”
Imagine that you closed the book right now and took an hourlong break. In fact, don’t even take a break; just call up a friend and retell that passage without rereading it. Good luck.
Is this a fair comparison—an urban legend to a cherry-picked bad passage? Of course not. But here’s where things get interesting: Think of our two examples as two poles on a spectrum of memorability. Which sounds closer to the communications you encounter at work? If you’re like most people, your workplace gravitates toward the nonprofit pole as though it were the North Star.
Maybe this is perfectly natural; some ideas are inherently interesting and some are inherently uninteresting. A gang of organ thieves—inherently interesting! Nonprofit financial strategy—inherently uninteresting! It’s the nature versus nurture debate applied to ideas: Are ideas born interesting or made interesting?
Well, this is a nurture book.
So how do we nurture our ideas so they’ll succeed in the world? Many of us struggle with how to communicate ideas effectively, how to get our ideas to make a difference. A biology teacher spends an hour explaining mitosis, and a week later only three kids remember what it is. A manager makes a speech unveiling a new strategy as the staffers nod their heads enthusiastically, and the next day the frontline employees are observed cheerfully implementing the old one.
Good ideas often have a hard time succeeding in the world. Yet the ridiculous Kidney Heist tale keeps circulating, with no resources whatsoever to support it.
Why? Is it simply because hijacked kidneys sell better than other topics? Or is it possible to make a true, worthwhile idea circulate as effectively as this false idea?

The Truth About Movie Popcorn

Art Silverman stared at a bag of movie popcorn. It looked out of place sitting on his desk. His office had long since filled up with fake-butter fumes. Silverman knew, because of his organization’ s research, that the popcorn on his desk was unhealthy. Shockingly unhealthy, in fact. His job was to figure out a way to communicate this message to the unsuspecting moviegoers of America.
Silverman worked for the Center for Science in the Public Interest (CSPI), a nonprofit group that educates the public about nutrition. The CSPI sent bags of movie popcorn from a dozen theaters in three major cities to a lab for nutritional analysis. The results surprised everyone.
The United States Department of Agriculture (USDA) recommends that a normal diet contain no more than 20 grams of saturated fat each day. According to the lab results, the typical bag of popcorn had 37 grams.
The culprit was coconut oil, which theaters used to pop their popcorn. Coconut oil had some big advantages over other oils. It gave the popcorn a nice, silky texture, and released a more pleasant and natural aroma than the alternative oils. Unfortunately, as the lab results showed, coconut oil was also brimming with saturated fat.
The single serving of popcorn on Silverman’s desk—a snack someone might scarf down between meals—had nearly two days’ worth of saturated fat. And those 37 grams of saturated fat were packed into a medium-sized serving of popcorn. No doubt a decentsized bucket could have cleared triple digits.
The challenge, Silverman realized, was that few people know what “37 grams of saturated fat” means. Most of us don’t memorize the USDA’s daily nutrition recommendations. Is 37 grams good or bad? And even if we have an intuition that it’s bad, we’d wonder if it was “bad bad” (like cigarettes) or “normal bad” (like a cookie or a milk shake).
Even the phrase “37 grams of saturated fat” by itself was enough to cause most people’s eyes to glaze over. “Saturated fat has zero appeal,” Silverman says. “It’s dry, it’s academic, who cares?”
Silverman could have created some kind of visual comparison— perhaps an advertisement comparing the amount of saturated fat in the popcorn with the USDA’ s recommended daily allowance. Think of a bar graph, with one of the bars stretching twice as high as the other.
But that was too scientific somehow. Too rational. The amount of fat in this popcorn was, in some sense, not rational. It was ludicrous. The CSPI needed a way to shape the message in a way that fully communicated this ludicrousness.
Silverman came up with a solution.

CSPI called a press conference on September 27, 1992. Here’s the message it presented: “A medium-sized ‘butter’ popcorn at a typical neighborhood movie theater contains more artery-clogging fat than a bacon-and-eggs breakfast, a Big Mac and fries for lunch, and a steak dinner with all the trimmings—combined!”
The folks at CSPI didn’t neglect the visuals—they laid out the full buffet of greasy food for the television cameras. An entire day’ s worth of unhealthy eating, displayed on a table. All that saturated fat— stuffed into a single bag of popcorn.
The story was an immediate sensation, featured on CBS, NBC, ABC, and CNN. It made the front pages of USA Today, the Los Angeles Times, and The Washington Post’s Style section. Leno and Letterman cracked jokes about fat-soaked popcorn, and headline writers trotted out some doozies: “Popcorn Gets an ‘R’ Rating,” “Lights, Action, Cholesterol!” “Theater Popcorn is Double Feature of Fat.”
The idea stuck. Moviegoers, repulsed by these findings, avoided popcorn in droves. Sales plunged. The service staff at movie houses grew accustomed to fielding questions about whether the popcorn was popped in the “bad” oil. Soon after, most of the nation’ s biggest theater chains—including United Artists, AMC, and Loews— announced that they would stop using coconut oil.

Chip Heath is a professor at Stanford Graduate School of Business, teaching courses on strategy and organizations. He has helped over 450 startups hone their business strategy and messages. He lives in Los Gatos, California. Chip and his brother Dan have written three New York Times bestselling books: Made to Stick, Switch, and Decisive. Their books have sold over two million copies worldwide and have been translated into thirty-three languages, including Thai, Arabic, and Lithuanian. Their most recent book is The Power of Moments.

Dan Heath is a senior fellow at Duke University’s CASE center, which supports entrepreneurs fighting for social good. He lives in Durham, North Carolina. Dan and his brother Chip have written three New York Times bestselling books: Made to Stick, Switch, and Decisive. Their books have sold over two million copies worldwide and have been translated into thirty-three languages, including Thai, Arabic, and Lithuanian. Their most recent book is The Power of Moments.

Why Some Ideas Survive and Others Die 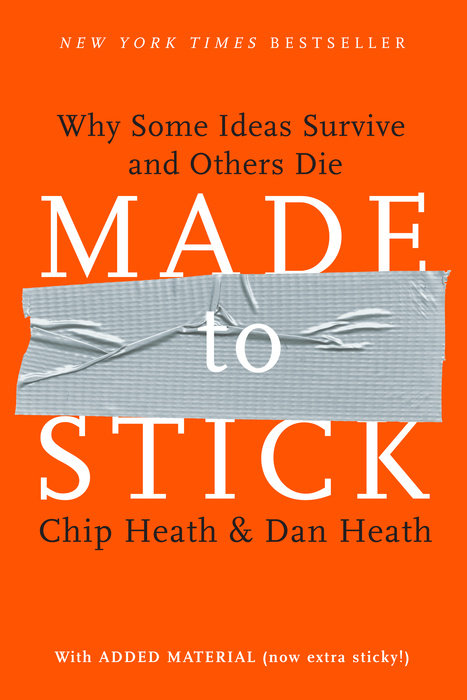