Darth Plagueis: one of the most brilliant Sith Lords who ever lived. Possessing power is all he desires; losing it is the only thing he fears. As an apprentice, he embraces the ruthless ways of the Sith. When the time is right, he destroys his Master—and vows never to suffer the same fate. For like no other disciple of the dark side, Darth Plagueis learns to command the ultimate power . . . over life and death.

Darth Sidious: Plagueis’s chosen apprentice. Under the guidance of his Master, he secretly studies the ways of the Sith while publicly rising to power in the galactic government, first as Senator, then as Chancellor, and eventually as Emperor.

Darth Plagueis and Darth Sidious, Master and acolyte, target the galaxy for domination—and the Jedi Order for annihilation. But can they defy the merciless Sith tradition? Or will the desire of one to rule supreme, and the dream of the other to live forever, sow the seeds of their destruction?

“Luceno draws on his storytelling skill and prodigious knowledge of the [Star Wars] world . . . to craft a complex tale of ambition and desire.”—Library Journal

Forty-­seven standard years before the harrowing reign of Emperor Palpatine, Bal’demnic was nothing more than an embryonic world in the Outer Rim’s Auril sector, populated by reptilian sentients who expressed as little tolerance for outsiders as they did for one another. Decades later the planet would have a part to play in galactic events, its own wink of historical notoriety, but in those formative years that presaged the Republic’s ineluctable slide into decadence and turmoil, Bal’demnic was of interest only to xenobiologists and cartographers. It might even have escaped the notice of Darth Plagueis, for whom remote worlds held a special allure, had his Master, Tenebrous, not discovered something special about the planet.

“Darth Bane would appreciate our efforts,” the Sith Master was telling his apprentice as they stood side by side in the crystalline cave that had drawn them across the stars.

A Bith, Tenebrous was as tall as Plagueis and nearly as cadaverously thin. To human eyes, his bilious complexion might have made him appear as haggard as the pallid Muun, but in fact both beings were in robust health. Though they conversed in Basic, each was fluent in the other’s native language.

“Darth Bane’s early years,” Plagueis said through his transpirator mask. “Carrying on the ancestral business, as it were.”

Behind the faceplate of his own mask, Tenebrous’s puckered lips twitched in disapproval. The breathing device looked absurdly small on his outsized cleft head, and the convexity of the mask made the flat disks of his lidless eyes look like close-­set holes in his pinched face.

Plagueis weathered the gentle rebuke. He had been apprenticed to Tenebrous for as many years as the average human might live, and still Tenebrous never failed to find fault when he could.

“What more appropriate way for us to close the circle than by mimicking the Sith’ari’s seminal efforts,” Tenebrous continued. “We weave ourselves into the warp and weft of the tapestry he created.”

Plagueis kept his thoughts to himself. The aptly named Darth Bane, who had redefined the Sith by limiting their number and operating from concealment, had mined cortosis as a youth on Apatros long before embracing the tenets of the dark side. In the thousand years since his death, Bane had become deified; the powers attributed to him, legendary. And indeed what more appropriate place for his disciples to complete the circle, Plagueis told himself, than in profound obscurity, deep within an escarpment that walled an azure expanse of Bal’demnic’s Northern Sea.

The two Sith were outfitted in environment suits that protected them from scorching heat and noxious atmosphere. The cave was crosshatched by scores of enormous crystals that resembled glowing lances thrust every which way into a trick chest by a stage magician. A recent seismic event had tipped the landmass, emptying the labyrinthine cave system of mineral-­rich waters, but the magma chamber that had kept the waters simmering for millions of years still heated the humid air to temperatures in excess of what even Tenebrous and Plagueis could endure unaided. Close at hand sat a stubby treddroid tasked with monitoring the progress of a mining probe that was sampling a rich vein of cortosis ore at the bottom of a deep shaft. A fabled ore, some called it—­owing to its scarcity, but even more for its intrinsic ability to diminish the effectiveness of the Jedi lightsaber. For that reason, the Jedi Order had gone to great lengths to restrict mining and refinement of the ore. If not the bane of the Order’s existence, cortosis was a kind of irritant, a challenge to their weapon’s reputation for fearsome invincibility.

It was to Tenebrous’s credit that the Sith had learned of Bal’demnic’s rich lodes before the Jedi, who by means of an agreement with the Republic Senate had first claim to all discoveries, as they had with Adegan crystals and Force-­sensitive younglings of all species. But Tenebrous and the generations of Sith Masters who had preceded him were privy to covert data gleaned by vast networks of informants the Senate and the Jedi knew nothing about, including mining survey teams and weapons manufacturers.

“Based on the data I am receiving,” the treddroid intoned, “eighty-­two percent of the ore is capable of being purified into weapons-­grade cortosis shield.”

Plagueis looked at Tenebrous, who returned a nod of satisfaction. “The percentage is consistent with what I was told to expect.”

“Of no consequence,” Tenebrous said.

Strewn about the superheated tunnel were broken borer bits, expended gasifiers, and clogged filtration masks, all abandoned by the exploratory team that had sunk the shaft several standard months earlier. From the shaft’s broad mouth issued the repeated reports of the probe droid’s hydraulic jacks. Music to Tenebrous’s auditory organs, Plagueis was certain.

“Can you not share your plans for this discovery?”

“In due time, Darth Plagueis.” Tenebrous turned away from him to address the treddroid. “Instruct the probe to evaluate the properties of the secondary lode.”

Plagueis studied the screen affixed to the droid’s flat head. It displayed a map of the probe’s movements and a graphic analysis of its penetrating scans, which reached clear to the upper limits of the magma chamber.

“The probe is running an analysis,” the treddroid updated.

With the reciprocating sounds of the probe’s hydraulic jacks echoing in the crystal cave, Tenebrous began to circle the shaft, only to come to a sudden halt when the drilling ceased.

“Why has it stopped?” he asked before Plagueis could.

The droid’s reply was immediate. “The Em-­Two unit informs me that it has discovered a pocket of gas directly beneath the new borehole.” The droid paused, then added: “I’m sorry to report, sirs, that the gas is a highly combustible variant of lethane. The Em-­Two unit predicts that the heat generated by its hydraulic jacks will ignite an explosion of significant magnitude.”

Suspicion crept into Tenebrous’s voice. “The original report made no mention of lethane.”

The droid pivoted to face him. “I know nothing of that, sir. But the Em-­Two unit is quite insistent. What’s more, my own programming corroborates the fact that it is not unusual to find pockets of lethane in close proximity to cortosis ore.”

“Query the probe about excavating around the lethane pocket,” Plagueis said.

“The Em-­Two unit recommends employing that very strategy, sir. Shall I order it to proceed?”

Plagueis looked at Tenebrous, who nodded.

“Task the probe to proceed,” Plagueis said. When the hammering recommenced, he fixed his gaze on the display screen to monitor the probe’s progress. “Tell the probe to stop,” he said after only a moment had elapsed.

“Why are you interfering?” Tenebrous said, storming forward.

Plagueis gestured to the display. “The map indicates a more massive concentration of lethane in the area where it’s drilling.”

“You’re correct, sir,” the droid said in what amounted to dismay. “I will order the unit to halt all activity.”

And yet the hammering continued.

“Droid,” Plagueis snapped, “did the probe acknowledge your order?”

Tenebrous stiffened, narrowly avoiding slamming his head into one of the cave’s massive crystals. “Is it still within range?”

“Then run a communications diagnostic.”

“I have, sir, and all systems are nominal. The unit’s inability to respond—­” It fell briefly silent and began again. “The unit’s refusal to respond appears to be deliberate.”

“Deactivate it,” Tenebrous said. “At once.”

The hammering slowed and eventually ceased, but not for long.

“The Em-­Two unit has overridden my command.”

“Clearly not, sir. In fact, it is highly probable that the unit is executing a deep-­seated subroutine that escaped earlier notice.”

Plagueis glanced at Tenebrous. “Who procured the probe?”

“This isn’t the time for questions. The probe is about to breach the pocket.” 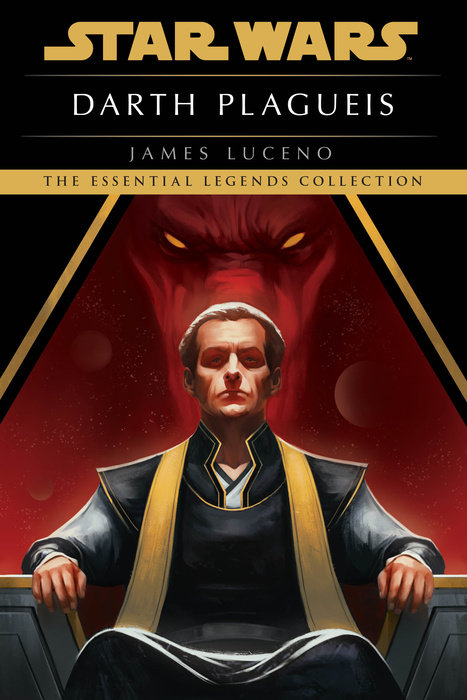