There’s something out there:
a juggernaut of evil bearing down to crush the Republic—
unless one lone Jedi, shunned and reviled, can stop it.

Hero, traitor, conqueror, villain, savior—the man called Revan has been all of these. He left Coruscant a Jedi, on a mission to defeat the Mandalorians. He returned a Sith disciple, bent on destroying the Republic. The Jedi Council gave Revan his life back, but the price of redemption was the loss of his memories. All that’s left are nightmares—and deep, abiding fear. What happened beyond the Outer Rim that Revan can’t quite remember or entirely forget? One thing he’s certain of: Something dark is plotting to destroy the very existence of the Republic. With no idea how to identify the threat, let alone stop it, Revan may be doomed to fail. For he’s never faced a more powerful and diabolic enemy. But only death can stop him from trying.

“Full of adventure, danger, and revelations.”—TheForce.Net

An excerpt from Revan: Star Wars Legends (The Old Republic)

Lord Scourge raised the hood of his cloak as he stepped off the shuttle, a shield against the wind and pelting rain. Storms were common here on Dromund Kaas; dark clouds perpetually blocked out the sun, rendering terms like day and night meaningless. The only natural illumination came from the frequent bursts of lightning arcing across the sky, but the glow from the spaceport and nearby Kaas City provided more than enough light to see where he was going.

The powerful electrical storms were a physical manifestation of the dark side power that engulfed the entire planet—a power that had brought the Sith back here a millennium before, when their very survival had been in doubt.

After a crushing defeat in the Great Hyperspace War, the Emperor had risen up from the tattered ranks of the remaining Sith Lords to lead his followers on a desperate exodus to the farthest reaches of the galaxy. Fleeing the Republic armies and the relentless revenge of the Jedi, they eventually resettled far beyond the borders of Republic-charted space on their long-lost ancestral homeworld.

There, safely hidden from their enemies, the Sith began to rebuild their Empire. Under the guidance of the Emperor—the immortal and all-powerful savior who still reigned over them even after a thousand years—they abandoned the hedonistic lifestyles of their barbaric ancestors.

Instead they created a near-perfect society in which the Imperial military operated and controlled virtually every aspect of daily life. Farmers, mechanics, teachers, cooks, janitors—all were part of the great martial machine, each individual a cog trained to perform his or her duties with maximum discipline and efficiency. As a result, the Sith had been able to conquer and enslave world after world in the unexplored regions of the galaxy, until their power and influence rivaled those of their glorious past.

Another burst of lightning split the sky, momentarily illuminating the massive citadel that loomed over Kaas City. Built by slaves and devoted followers, the citadel served as both palace and fortress, an unassailable meeting place for the Emperor and the twelve handpicked Sith Lords who made up his Dark Council.

A decade earlier, when Scourge had first arrived on Dromund Kaas as a young apprentice, he had vowed to one day set foot inside the citadel’s exclusive halls. Yet in all his years of training at the Sith Academy on Kaas City’s borders, he had never been granted the privilege. He had been one of the top students, marked by his superiors for his strength in the Force and his fanatic devotion to the ways of the Sith. But acolytes were not permitted inside the citadel; its secrets were reserved for those in direct service to the Emperor and the Dark Council.

The dark side power emanating from within the building was undeniable; he had felt the raw, crackling energy every day during his years as an acolyte. He had drawn on it, focusing his mind and spirit to channel the power through his own body to sustain him during the brutal training sessions.

Now, after almost two years away, he was back on Dromund Kaas. Standing on the landing pad, he could once again feel the dark side deep inside his bones, the sizzling heat more than compensating for the minor discomfort of the wind and rain. But he was no longer a mere apprentice. Scourge had returned to the seat of Imperial power as a full-fledged Sith Lord.

He had known this day would come eventually. After graduating from the Sith Academy he had hoped for a posting on Dromund Kaas. Instead he had been sent to the fringes of the Empire to help quell a series of minor rebellions on recently conquered worlds. Scourge suspected the posting had been a punishment of some type. One of his instructors, jealous of the star pupil’s potential, had probably recommended that he be stationed as far from the seat of Imperial power as possible to slow his ascent to the upper ranks of Sith society.

Unfortunately, Scourge had no proof to back his theory. Yet even exiled to the uncivilized sectors on the farthest borders of the Empire, he had still managed to forge his reputation. His martial skills and ruthless pursuit of the rebel leaders caught the notice of several prominent military leaders. Now, two years after leaving the Academy, he had returned to Dromund Kaas as a newly anointed Lord of the Sith. More important, he was here at the personal request of Darth Nyriss, one of the most senior members of the Emperor’s Dark Council.

“Lord Scourge,” a figure called out over the wind, running up to greet him. “I am Sechel. Welcome to Dromund Kaas.”

“Welcome back,” Scourge corrected as the man dropped to one knee and bowed his head in a gesture of respect. “This is not my first time on this world.”

Sechel’s hood was pulled up against the rain, covering his features, but during his approach Scourge had noticed the red skin and dangling cheek tendrils that marked him as a pureblood Sith, just like Lord Scourge himself. But while Scourge was an imposing figure, tall and broad-shouldered, this man was small and slight. Reaching out, Scourge sensed only the faintest hint of the Force in the other, and his features twisted into a sneer of revulsion.

Unlike the humans that made up the bulk of the Empire’s population, the Sith species were all blessed with the power of the Force to varying degrees. It marked them as the elite; it elevated them above the lower ranks of Imperial society. And it was a legacy that was fervently protected.

A pureblood born without any connection to the Force was an abomination; by custom such a creature could not be suffered to live. During his time at the Academy, Lord Scourge had encountered a handful of Sith whose power in the Force was noticeably weak. Hampered by their failing, they relied on the influence of their high-ranking families to find them postings as low-level aids or administrative officials at the Academy, where their handicap would be least noticed. Spared from the lower castes only by their pureblood heritage, in Scourge’s eyes they were barely better than slaves, though he did have to admit that the more competent ones could have their uses.

But never before had he encountered one of his own kind with as feeble an attunement to the Force as the man huddled at his feet. The fact that Darth Nyriss had sent someone so vile and unworthy to greet him was unsettling. He’d expected a more substantial and impressive welcome.

“Get up,” he snarled, making no effort to conceal his disgust.

Sechel quickly scrambled to his feet. “Darth Nyriss sends her apologies for not coming to meet you personally,” he said quickly. “There have been several attempts on her life recently, and she only leaves her palace under the rarest of circumstances.”

A crash of thunder nearly drowned out Sechel’s apology, heralding an increase in the storm’s intensity. The driving rain started to come down in stinging sheets.

“Were your Master’s instructions to leave me standing here in this downpour until I drowned?” Scourge demanded.

“F‑forgive me, my lord. Please, follow me. We have a speeder waiting to take you to the domicile.”

A short distance from the spaceport was a small landing pad. A constant stream of hovercabs was landing and taking off—the preferred way for those of the lower ranks who couldn’t afford their own speeder to traverse the city. As was typical at a busy spaceport, a thick crowd surrounded the base of the landing pad. Those just arriving quickly fell into the queues waiting to hire a driver, moving with the disciplined precision that was the hallmark of Imperial society.

Of course, Lord Scourge had no need to step into the line. While some in the crowd cast sharp glances at Sechel as he tried to force a path through, the throng quickly parted upon catching sight of the towering figure behind him. Even with his hood drawn against the rain, Scourge’s black cape, his spiked armor, his dark red complexion, and the lightsaber prominently displayed at his side clearly marked him as a Sith Lord.

The individuals in the crowd showed a wide variety of reactions to his presence. Many were slaves or indentured servants out running errands for their masters; they wisely kept their eyes fixed on the ground, careful not to make eye contact. The Enlisted—the ranks of ordinary individuals conscripted into mandatory military service—snapped smartly to attention, as if waiting for Scourge to inspect them as he passed by.

The Subjugates—the caste of offworld merchants, traders, dignitaries, and visitors from planets not yet granted full status in the Empire—stared with a mixture of wonder and fear as they stepped quickly aside. Many of them bowed as a sign of respect. On their homeworlds they might be rich and powerful, but here on Dromund Kaas they were well aware that they ranked only slightly above the servants and slaves.

The only exception to the rule was a pair of humans, one male, the other female. Scourge noticed them standing at the foot of the stairs leading up to the landing pad, stubbornly holding their ground. 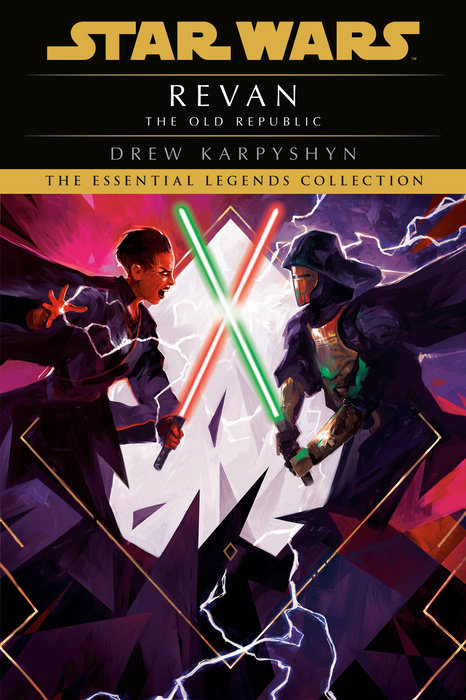