The Sith Empire rises from the ashes, set on a path of destruction and devastation in the wake of one of its most sinister dark lords—Darth Malgus.

Our time has come. For three hundred years we prepared; we grew stronger while you rested in your cradle of power, believing your people were safe and protected. You were trusted to lead the Republic, but you were deceived, as our powers of the dark side have blinded you. . . . You were deceived and now your Republic shall fall.

It is a time of vengeance in a galaxy far, far away.

Darth Malgus steps out of the shadows to lead the Sith in striking a fatal blow to the heart of the Jedi Order. Crimson blades rain death and pain upon the Republic, seizing control of Coruscant. But even in triumph, Darth Malgus discovers betrayal by his own brethren, a quest for peace with the Republic that will only corrode their hard-won power.

As the dark lord plots against the Sith leading their own kind to ruin, vengeance hunts him in turn. Her name is Aryn Leneer—a Jedi with nothing left to lose on a quest to avenge her slain master.

An excerpt from Deceived: Star Wars Legends (The Old Republic)

Fatman shivered, her metal groaning, as Zeerid pushed her through Ord Mantell’s atmosphere. Friction turned the air to fire, and Zeerid watched the orange glow of the flames through the transparisteel of the freighter’s cockpit.

He was gripping the stick too tightly, he realized, and relaxed.

He hated atmosphere entries, always had, the long forty-count when heat, speed, and ionized particles caused a temporary sensor blackout. He never knew what kind of sky he’d encounter when he came out of the dark. Back when he’d carted Havoc Squadron commandos in a Republic gully jumper, he and his fellow pilots had likened the blackout to diving blind off a seaside cliff.

You always hope to hit deep water, they’d say. But sooner or later the tide goes out and you go hard into rock.

Or hard into a blistering crossfire. Didn’t matter, really. The effect would be the same.

“Coming out of the dark,” he said as the flame diminished and the sky opened below.

No one acknowledged the words. He flew Fatman alone, worked alone. The only things he carted anymore were weapons for The Exchange. He had his reasons, but he tried hard not to think too hard about what he was doing.

He leveled the ship off, straightened, and ran a quick sweep of the surrounding sky. The sensors picked up nothing.

“Deep water and it feels fine,” he said, smiling.

On most planets, the moment he cleared the atmosphere he’d have been busy dodging interdiction by the planetary government. But not on Ord Mantell. The planet was a hive of crime syndicates, mercenaries, bounty hunters, smugglers, weapons dealers, and spicerunners.

And those were just the people who ran the place.

Factional wars and assassinations occupied their attention, not governance, and certainly not law enforcement. The upper and lower latitudes of the planet in particular were sparsely settled and almost never patrolled, a literal no-being’s-land. Zeerid would have been surprised if the government had survsats running orbits over the area.

And all that suited him fine.

Fatman broke through a thick pink blanket of clouds, and the brown, blue, and white of Ord Mantell’s northern hemisphere filled out Zeerid’s field of vision. Snow and ice peppered the canopy, frozen shrapnel, beating a steady rhythm on Fatman’s hull. The setting sun suffused a large swath of the world with orange and red. The northern sea roiled below him, choppy and dark, the irregular white circles of breaking surf denoting the thousands of uncharted islands that poked through the water’s surface. To the west, far in the distance, he could make out the hazy edge of a continent and the thin spine of snowcapped, cloud-topped mountains that ran along its north–south axis.

Motion drew his eye. A flock of leatherwings, too small to cause a sensor blip, flew two hundred meters to starboard and well below him, the tents of their huge, membranous wings flapping slowly in the freezing wind, the arc of the flock like a parenthesis. They were heading south for warmer air and paid him no heed as he flew over and past them, their dull, black eyes blinking against the snow and ice.

He pulled back on the ion engines and slowed still further. A yawn forced itself past his teeth. He sat up straight and tried to blink away the fatigue, but it was as stubborn as an angry bantha. He’d given the ship to the autopilot and dozed during the hyperspace run from Vulta, but that was all the rack he’d had in the last two standard days. It was catching up to him.

He scratched at the stubble of his beard, rubbed the back of his neck, and plugged the drop coordinates into the navicomp. The comp linked with one of Ord Mantell’s unsecured geosyncsats and fed back the location and course to Fatman. Zeerid’s HUD displayed it on the cockpit canopy. He eyed the location and put his finger on the destination.

“Some island no one has ever heard of, up here where no one ever goes. Sounds about right.”

Zeerid turned the ship over to the autopilot, and it banked him toward the island.

His mind wandered as Fatman cut through the sky. The steady patter of ice and snow on the canopy sang him a lullaby. His thoughts drifted back through the clouds to the past, to the days before the accident, before he’d left the marines. Back then, he’d worn the uniform proudly and had still been able to look at himself in the mirror—

He caught himself, caught the burgeoning self-pity, and stopped the thoughts cold. He knew where it would lead.

“Stow that, soldier,” he said to himself.

He was what he was, and things were what they were.

He checked his location against the coordinates in the navicomp. Almost there.

“Gear up and get frosty,” he said, echoing the words he used to say to his commandos. “Ninety seconds to the LZ.”

He continued his ritual, checking the charge on his blasters, tightening the straps on his composite armor vest, getting his mind right.

Ahead, he saw the island where he would make the drop: ten square klicks of volcanic rock fringed with a bad haircut of waist-high scrub whipping in the wind. The place would probably be underwater and gone next year.

He angled lower, flew a wide circle, unable to see much detail due to the snow. He ran a scanner sweep, as always, and the chirp of his instrumentation surprised him. A ship was already on the island. He checked his wrist chrono and saw that he was a full twenty standard minutes early. He’d made this run three times and Arigo—​he was sure the man’s real name was not Arigo—had never before arrived early.

He descended to a few hundred meters to get a better look.

Arigo’s freighter, the Doghouse, shaped not unlike the body of a legless beetle, sat in a clearing on the east side of the island. Its landing ramp was down and stuck out of its belly like a tongue. Halogens glared into the fading twilight and reflected off the falling snow, turning the flakes into glittering jewels. He saw three men lingering around the ramp, though he was too far away to notice any details other than their white winter parkas.

They spotted Fatman, and one waved a gloved hand.

Zeerid licked his lips and frowned.

Flares went up from the freighter and burst in the air—green, red, red, green.

That was the correct sequence.

He circled one more time, staring down through the swirl of snow, but saw nothing to cause alarm, no other ships on the island or in the surrounding sea. He pushed aside his concern and chalked his feelings up to the usual tension caused by dealing with miscreants and criminals.

In any event, he could not afford to mess up a drop of several hundred million credits of hardware because he felt skittish. The ultimate buyer—whoever that was—would be unhappy, and The Exchange would take the lost profits from Zeerid in blood and broken bones, then tack it on to the debt he already owed them. He’d lost track of exactly how much that was, but knew it was at least two million credits on the note for Fatman plus almost half that again on advances for Arra’s medical treatment, though he’d kept Arra’s existence a secret and his handler thought the latter were for gambling losses.

“LZ is secure.” He hoped saying it would make it so. “Going in.”

The hum of the reverse thrusters and a swirl of blown snow presaged the thump of Fatman’s touching down on the rock. He landed less than fifty meters from Arigo’s ship.

For a moment he sat in the cockpit, perfectly still, staring at the falling snow, knowing there’d be another drop after this one, then another, then another, and he’d still owe The Exchange more than he’d ever be able to pay. He was on a treadmill with no idea how to get off.

Didn’t matter, though. The point was to earn for Arra, maybe get her a hoverchair instead of that wheeled antique. Better yet, prostheses.

He blew out a breath, stood, and tried to find his calm as he threw on a winter parka and fingerless gloves. In the cargo hold, he had to pick his way though the maze of shipping containers. He avoided looking directly at the thick black lettering on their sides, though he knew it by heart, had seen such crates many times in his military career.

FOR MILITARY USE ONLY.

KEEP AWAY FROM INTENSE HEAT

OR OTHER ENERGY SOURCES.

In the crates were upward of three hundred million credits’ worth of crew-served laser cannons, MPAPPs, grenades, and enough ammunition to keep even the craziest fire team grinning and sinning for months.

Near the bay’s landing ramp, he saw that three of the four securing straps had come loose from one of the crates of grenades. He was lucky the crate hadn’t bounced around in transit. Maybe the straps had snapped when he set down on the island. He chose to believe that rather than admit to his own sloppiness.

Paul S. Kemp is the author of the New York Times bestselling novel Star Wars: Crosscurrent and Star Wars: Riptide, as well as nine Forgotten Realms fantasy novels and many short stories. When he’s not writing, he practices corporate law in Michigan, which has inspired him to write some really believable villains. He digs cigars, single malt scotch, and ales, and tries to hum the theme song to Shaft at least once per day. Paul S. Kemp lives and works in Grosse Pointe, Michigan, with his wife, twin sons, and a couple of cats. 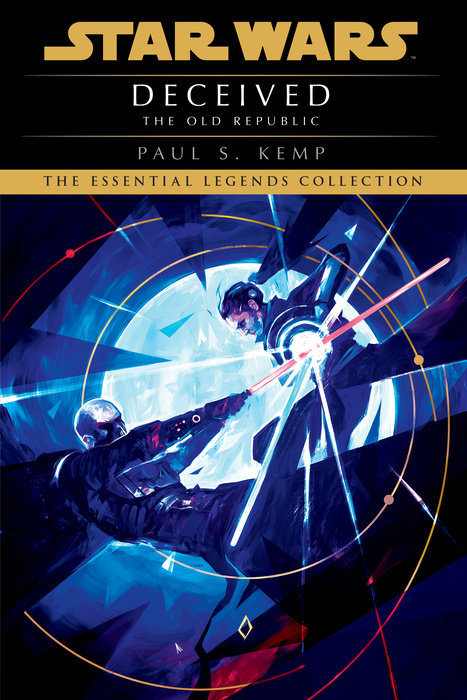