NEW YORK TIMES BESTSELLER • From the author of Star Wars: Lost Stars comes a thrilling novel set in the years before the events of Star Wars: The Force Awakens.

“Unmissable . . . Bloodline’s tense politics, vivid new characters, and perfectly characterized Leia make it feel as central to the Star Wars universe as one of the films.”—Tordotcom

WITNESS THE BIRTH OF THE RESISTANCE

When the Rebellion defeated the Empire in the skies above Endor, Leia Organa believed it was the beginning to a lasting peace. But after decades of vicious infighting and partisan gridlock in the New Republic Senate, that hope seems like a distant memory.

Now a respected senator, Leia must grapple with the dangers that threaten to cripple the fledgling democracy—from both within and without. Underworld kingpins, treacherous politicians, and Imperial loyalists are sowing chaos in the galaxy. Desperate to take action, senators are calling for the election of a First Senator. It is their hope that this influential post will bring strong leadership to a divided galaxy.

As the daughter of Darth Vader, Leia faces with distrust the prospect of any one person holding such a powerful position—even when supporters suggest Leia herself for the job. But a new enemy may make this path Leia’s only option. For at the edges of the galaxy, a mysterious threat is growing. . . .

“[Claudia] Gray paints a much more complete galaxy than we often get to see on the big screen. . . . Knowing that Rian Johnson (writer, director of Star Wars: Episode VIII) had some creative input on the novel provides hope that we haven’t seen the last of all of these wonderful characters. . . . Star Wars: Bloodline isn’t just a great Star Wars book, or a great Leia book, or a great book; it’s a great introduction into the larger world of Star Wars in general.”—ComicBookdotcom

“Bloodline is a nonstop page-turner that grabs at heartstrings that you weren’t aware of and yanks down on every one of them. The story is loaded with context for The Force Awakens that plants the seeds for The First Order in perfectly haunting ways, and leaves the reader grasping for more details on newly discovered favorite characters.”—Inverse

An excerpt from Bloodline (Star Wars)

The conference building of the New Republic senatorial complex contained multiple rooms appropriate for every kind of auxiliary function imaginable, from memorial concerts to awards ceremonies. Leia and Tai-Lin headed toward one of the smallest banquet rooms. The breakfast meeting had been organized by Varish Vicly, who couldn’t imagine a bad time for a party.

Varish came loping toward them now on all fours. “There you are! I was worried you’d be late.”

“We’re still early,” Leia protested as both she and Tai-Lin were wrapped in quick, long-limbed hugs.

“They” meant prominent representatives of both the far-left and far-right branches of the Populist faction. The far-right branches wanted to dissolve the Senate so each world would again become a totally separate entity; the far left hoped to open voting to the general populace, so that instead of thousands of senators refusing to agree, they could have countless citizens refusing to agree. The only thing these senators had in common was, it seemed, a willingness to support Leia’s candidacy for First Senator.

“Now come along and be introduced to everyone,” Varish insisted. Soon Leia found herself shaking hands and paws, murmuring greetings; thanks to some review holos Korrie had prepared for her, she recognized each senator in attendance and could even ask a few pertinent questions about their families and worlds.

In other words, Leia thought as she listened to someone cheerfully talk about his grandchildren, this is going wonderfully for everyone but me. Though not until now had she realized how much she dreaded her candidacy—or maybe just discussing her candidacy—whatever it was that made her so ill at ease.

They entered the banquet hall together, the entire group walking two by two. Leia knew the seat at the far end of the table would be hers, guest of honor as counterpart to the host. So she walked the length of the room, attentive to the senator at her side, before glancing down at the arrangements—sumptuous even by Varish’s standards, with a velvet runner stretching along the table and delicate paper streamers lying across the tables, beneath elaborately folded napkins. Leia had to laugh. “Honestly, Varish. For breakfast?”

This won good-natured chuckles from the room; Varish Vicly’s lavish tastes were well known, a foible she herself joked about. Today, however, she shrugged. “I didn’t request this. Maybe the serving staff heard my name and assumed that meant to go all out for glamour.”

Varish smiled as she took her seat. “If that’s my reputation . . . you know, I can live with it.”

Leia settled into her chair, picked up her napkin—and stopped.

Something was written on the paper streamer on her plate. Actual writing. Virtually nobody wrote any longer; it had been years since Leia had seen actual words handwritten in ink on anything but historical documents.

But today, someone had left this message on her plate, only one word long:

Leia shoved her chair back, instantly leaping to her feet. “We have to get out of here,” she said to the startled senators at the table. “Now. Go!”

But they didn’t move, even as she dashed toward the door. Varish said, “Leia? What in the worlds—”

“Didn’t you hear me?” These fools who had never been in the war, who didn’t know an urgent warning when they got one. Leia held up the paper so they could see it. “Run! Everyone get up and run!”

With that, she took off, running as fast as she could, finally hearing the others stir behind her. Maybe they thought the note was only a prank, but Leia knew better. The inchoate dread that had swirled inside her all morning had solidified; this was what her feelings had been warning her about.

As they dashed through the hallways of the conference building, Leia glimpsed an alert panel and swerved sideways to hit it. A robotic voice said, “No detected hazards at this—”

“Override! Evacuation alert now!” Leia resumed running just as the warning lights began to blink and the siren’s wail sounded. Immediately people began filing out of various other rooms, mostly grumbling but at least moving toward the exits—and when they saw her, they, too, started to run. The sense of urgency built behind her like a wave cresting, preparing to crash.

Leia’s breath caught in her throat as she pushed herself harder, running full out toward the doors, so fast they almost didn’t have time to open for her. In the square beyond, security droids had begun herding people away from the building, but too many continued to mill around, staring in consternation at the scene. The others evacuating flooded through the doors behind and around her, but once they were clear of the structure, half of them stopped, remaining stupidly within range.

Within range of what? She still didn’t know. But every instinct within her—the Force itself—screamed that disaster was near.

Leia didn’t stop. She kept running as hard as she could, never looking back, until . . .

Brilliant light. A roar so loud it resonated in her skull. And hot air and debris slamming into her, knocking her down, rolling her over, erasing the world. 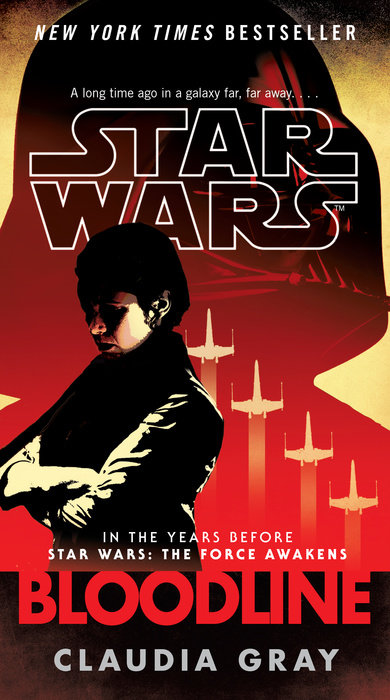