An investigation into Israel's nuclear capabilities discloses information about the country's rush toward nuclear status, its collaboration with South Africa and Iran, and its espionage activities.

An excerpt from The Samson Option

America’s most important military secret in 1979 was in orbit, whirling effortlessly around the world every ninety-six minutes, taking uncanny and invaluable reconnaissance photographs of all that lay hundreds of miles below. The satellite, known as KH-11, was an astonishing leap in technology: its images were capable of being digitally relayed to ground stations where they were picked up—in “real time”—for instant analysis by the intelligence community. There would be no more Pearl Harbors.

The first KH-11 had been launched on December 19, 1976, after Jimmy Carter’s defeat of President Gerald R. Ford in the November elections. The Carter administration followed Ford’s precedent by tightly restricting access to the high-quality imagery: even Great Britain, America’s closest ally in the intelligence world, was limited to seeing photographs on a case-by-case basis.

The intensive security system was given a jolt in March 1979, when President Carter decided to provide Israel with KH-11 photographs. The agreement gave Israel access to any satellite intelligence dealing with troop movements or other potentially threatening activities as deep as one hundred miles inside the borders of neighboring Lebanon, Syria, Egypt, and Jordan. The Israelis were to get the real thing: the raw and spectacular first-generation imagery as captured by the KH-11, some of it three-dimensional—and not the deliberately fuzzed and dulled photographs that were invariably distributed by the American intelligence community to the bureaucracy and to overseas allies in an effort to shield the superb resolution of the KH-11’s optics.

It was a significant triumph for the Israeli government, which had been seeking access to the KH-11 since the moment of launch three years before. Jimmy Carter’s decision to provide that high-tech imagery was suspected by some American intelligence officials as being a reward for Prime Minister Menachem Begin’s successful Camp David summit with Egyptian President Anwar Sadat the year before. These officials understood what many in the White House did not: adding an Israeli dimension to the system was a major commitment—and one that would interfere with the KH-11’s ability to collect the intelligence its managers wanted. The KH-11 was the most important advance of its time, explained a former official of the National Security Agency (NSA), the unit responsible for all communications intelligence, and every military and civilian intelligence agency in the government seemed to have an urgent requirement for it. The goal of the KH-11’s managers was to carefully plan and “prioritize” the satellite’s schedule to get it to the right place at the right time, while avoiding any abrupt shifts in its flight path or any sudden maneuver that would burn excess fuel. With good management, the multimillion-dollar satellite, with its limited fuel supply, would be able to stay longer in orbit, provide more intelligence, and be more cost-efficient. Carter’s decision to give Israel direct access to the KH-11 completely disrupted the careful scheduling for the satellite’s future use; it also meant that some American intelligence agencies were going to have less access to the satellite. “It was an unpopular decision in many, many ways,” said the former NSA official.

There were no official protests inside the administration, however: those few who were distressed by the KH-11 agreement understood that any disquiet, or even second-guessing, could jeopardize their own access to such information and thus reduce their status as insiders.

The Israelis, not surprisingly, viewed the KH-11 agreement as a reaffirmation of respect and support from the Carter administration, whose director of central intelligence, retired Admiral Stansfield Turner, had abruptly cut back intelligence liaison with Israel and other friendly nations as part of a restructuring of the Central Intelligence Agency. The Israelis, accustomed to far warmer treatment by Presidents Richard M. Nixon and Gerald R. Ford, saw the men running the Carter administration as naïve and anti-Semitic; as men who perhaps did not fully understand how entwined Israel’s primary foreign intelligence service, Mossad, had become with the CIA during the Cold War. The 1979 agreement on the KH-11 was no less than the twenty-eighth in a series of formal Israeli–American cooperative ventures in strategic intelligence since the 1950s.

Nothing has ever been officially disclosed about these arrangements, many of which were financed off-the-books—that is, from a special contingency fund personally maintained by the director of central intelligence. Through the 1960s, for example, one of the most sensitive operations in the Agency was code-named KK MOUNTAIN (KK being the CIA’s internal digraph, or designation, for messages and documents dealing with Israel) and provided for untold millions in annual cash payments to Mossad. In return, Mossad authorized its agents to act, in essence, as American surrogates throughout North Africa and in such countries as Kenya, Tanzania, and the Congo. Other intelligence agreements with Mossad revolved around the most sensitive of Israeli activities in the Middle East, where American dollars were being used to finance operations in Syria, and inside the Soviet Union, where the CIA’s men and women found it difficult to spy. Some of the Soviet activities apparently were financed by regular Agency disbursements—and thus cleared through the appropriate CIA congressional oversight committees—but the complex amalgamation of American financing and Israeli operations remains one of the great secrets of the Cold War.

The Israelis had responded to Admiral Turner’s 1977 cutback in liaison—in essence, his refusal to pay for the continuing operations in Africa and elsewhere—by sharply reducing their flow of intelligence back to Washington. In the Israeli view, the KH-11 agreement in March 1979 was made inevitable not by the success of Camp David but by the CIA’s failure to anticipate the steadily increasing Soviet pressure on Afghanistan in 1978 and the continuing upheavals in Iran. There were large Jewish communities in both nations—many shopkeepers in Kabul, Afghanistan’s capital, were Jewish—and Mossad’s information was far superior to the CIA’s. Most galling to the President and his top aides was the CIA’s embarrassingly inept reporting on Iran, where Shah Mohammed Reza Pahlavi, a U.S. ally of long standing, had been overthrown in February 1979 in a popular uprising—despite a year-long series of upbeat CIA predictions that he would manage to cling to power.† The CIA had rejected the Israeli view, provided in a trenchant analysis in 1978 by Uri Lubrani, a former Israeli ambassador to Iran, that the shah would not survive. The CIA had failed the President and forced the American leadership to turn once again to Israeli help in trying to anticipate world events. It was no accident that Lubrani was attached to the Israeli delegation that negotiated the March 1979 KH-11 agreement in Washington.

The KH-11 imagery provided Israel—depicting any military activity inside the border of Israel’s four neighbors—is known as I&W, for intelligence and warning, and carries the highest classification marking in the American intelligence community. The photographs, once processed, were to be picked up by Israeli military attachés at a special Pentagon office controlled by the Defense Intelligence Agency (DIA), the military’s joint intelligence service. There was one significant caveat in all this: Israelis were not to be given any intelligence that could help them plan preemptive strikes on their neighbors.

“I set up the rules,” one senior American intelligence official recalled. “The system was designed to provide [the Israelis] with everything they could possibly use within [the one-hundred-mile] striking distance. If it was inside Syria or Egypt, they got it all. If it was Iraq, Pakistan, or Libya, they didn’t.”

The official added, however, that he and his colleagues anticipated from the outset that the Israelis would do everything possible to get around the restrictions of the agreement. One of the immediate Israeli arguments was that the limitations should not apply to the joint enemy of the United States and Israel—the Soviet Union. In the months ahead, there would be constant Israeli pressure for access to satellite intelligence on the Soviet supply lines to Syria and the Soviet involvement in the training of Iraqi combat divisions in western Iraq. Those requests were flatly turned down by the Carter administration.

Nonetheless, Israel was once again an essential ally, and even if it could not get unfettered access to KH-11 imagery, the 1979 agreement did include language permitting Israel to make specific requests for satellite intelligence. Each request would be handled on a case-by-case basis.

The package was too much for British intelligence officials, involved Americans recalled, who were described as “mad as hell” about Israel’s being provided with the chance to obtain intelligence that they—World War II allies and fellow members of NATO—could not get.

Israel, as the British may have suspected, did have a secret agenda in its constant maneuvering for KH-11 access, but that agenda only became clear to a few top Reagan administration policymakers in the fall of 1981. The unraveling began with a bombing raid in Iraq.

SEYMOUR M. HERSH has been a staff writer for The New Yorker and The New York Times. He established himself at the forefront of investigative journalism in 1970 when he was awarded a Pulitzer Prize for his exposé of the massacre in My Lai, Vietnam. Since then he has received the George Polk Award five times, the National Magazine Award for Public Interest twice, the Los Angeles Times Book Prize, the National Book Critics Circle Award, the George Orwell Award, and dozens of other awards. He lives in Washington, D.C. 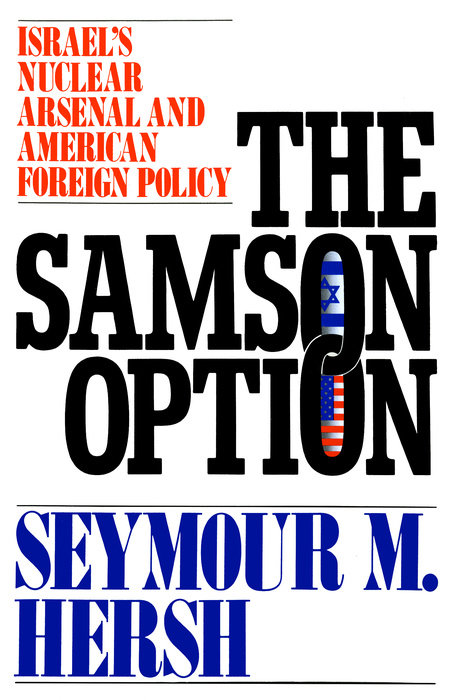