A stunningly illustrated anniversary edition of the final chapter of the beloved Farseer Trilogy, hailed by George R. R. Martin as “fantasy as it ought to be written,” and Lin-Manuel Miranda as “an incredible series.”

FitzChivalry Farseer and the Fool return in this final volume of the Farseer Trilogy, crowning the celebration of the twenty-fifth anniversary of Robin Hobb’s legendary series. The matched trilogy is now complete, rounded out by Assassin’s Quest, which contains ten full-color illustrations by Magali Villeneuve. Step into the spellbinding finale of this modern classic of epic fantasy, replete with adventure, magic, treachery, and sacrifice.

King Shrewd is dead at the hands of his son Regal. As is Fitz—or so his enemies and friends believe. But with the help of his allies and his beast magic, he emerges from the grave, deeply scarred in body and soul. The kingdom also teeters toward ruin: Regal has plundered and abandoned the capital, while the rightful heir, Prince Verity, is lost to his mad quest—perhaps to death. Only Verity’s return—or the heir his princess carries—can save the Six Duchies.

But Fitz will not wait. Driven by loss and bitter memories, he undertakes a quest: to kill Regal. The journey casts him into deep waters, as he discovers wild currents of magic within him—currents that will either drown him or make him something more than he was.

An excerpt from Assassin's Quest (The Illustrated Edition)

In the Chalced States, slaves are kept. They supply the drudge labor. They are the miners, the bellows workers, the galley rowers, the crews for the offal wagons, the field-­workers, and the whores. Oddly, slaves are also the nursemaids and children’s tutors and cooks and scribers and skilled craftsfolk. All of Chalced’s gleaming civilization, from the great libraries of Jep to the fabled fountains and baths at Sinjon’s, is founded on the existence of a slave class.

The Bingtown Traders are the major source of the slave supply. At one time, most slaves were captives taken in war, and Chalced still officially claims this is true. In more recent years there have not been sufficient wars to keep up with the demand for educated slaves. The Bingtown Traders are very resourceful in finding other sources, and the rampant piracy in the Trade Islands is often mentioned in association with this. Those who are slave owners in Chalced show little curiosity about where the slaves come from, so long as they are healthy.

Slavery is a custom that has never taken root in the Six Duchies. A man convicted of a crime may be required to serve the one he has injured, but a limit of time is always placed, and he is never seen as less than a man making atonement. If a crime is too heinous to be redeemed by labor, then the criminal pays with his death. No one ever becomes a slave in the Six Duchies, nor do our laws support the idea that a household may bring slaves into the kingdom and have them remain so. For this reason, many Chalced slaves who do win free of their owners by one path or another often seek the Six Duchies as a new home.

These slaves bring with them the far-­flung traditions and folklore of their own lands. One such tale I have preserved has to do with a girl who was Vecci, or what we would call Witted. She wished to leave her parents’ home, to follow a man she loved and be his wife. Her parents did not find him worthy and denied her permission. When they would not let her go, she was too dutiful a child to disobey them. But she was also too ardent a woman to live without her true love. She lay down on her bed and died of sorrow. Her parents buried her with great mourning and much self-­reproach that they had not allowed her to follow her heart. But unbeknownst to them, she was Wit-­bonded to a she-­bear. And when the girl died, the she-­bear took her spirit into her keeping, so it might not flee the world. Three nights after the girl had been buried, the she-­bear dug up the grave, and restored the girl’s spirit to her body. The girl’s gravebirth made her a new person, no longer owing duty to her parents. So she left the shattered coffin and went seeking her one true love. The tale has a sad ending, for having been a she-­bear for a time, she was never wholly human again, and her true love would not have her.

This scrap of a tale was the basis for Burrich’s decision to try to free me from Prince Regal’s dungeon by poisoning me.

The room was too hot. And too small. Panting no longer cooled me. I got up from the table and went to the water barrel in the corner. I took the cover off it and drank deeply. Heart of the Pack looked up with an almost-­snarl. “Use a cup, Fitz.”

Water ran from my chin. I looked up at him steadily, watching him.

“Wipe your face.” Heart of the Pack looked away from me, back to his own hands. He had grease on them and was rubbing it into some straps. I snuffed it. I licked my lips.

“Sit down and finish your work. Then we will eat.”

I tried to remember what he wanted of me. He moved his hand toward the table and I recalled. More leather straps at my end of the table. I went back and sat in the hard chair.

“I am hungry now,” I explained to him. He looked at me again in the way that did not show his teeth but was still a snarl. Heart of the Pack could snarl with his eyes. I sighed. The grease he was using smelled very good. I swallowed. Then I looked down. Leather straps and bits of metal were on the table before me. I looked at them for a while. After a time, Heart of the Pack set down his straps and wiped his hands on a cloth. He came to stand beside me, and I had to turn to be able to see him. “Here,” he said, touching the leather before me. “You were mending it here.” He stood over me until I picked it up again. I bent to sniff it and he struck my shoulder. “Don’t do that!”

My lip twitched, but I did not snarl. Snarling at him made him very, very angry. For a time I held the straps. Then it seemed as if my hands remembered before my mind did. I watched my fingers work the leather. When it was done, I held it up before him and tugged it, hard, to show that it would hold even if the horse threw its head back. “But there isn’t a horse,” I remembered out loud. “All the horses are gone.”

I come. I rose from my chair. I went to the door.

“Come back and sit down,” Heart of the Pack said.

“It is a better time for you to stay in. I have food here for you.”

“Nighteyes and I could find fresh meat.” My mouth ran at the thought of it. A rabbit torn open, still steaming in the winter night. That was what I wanted.

Nighteyes went away from the light that spilled from the window. But he did not go too far. He was waiting out there for me, but I knew he could not wait long. Like me, he was hungry now.

Heart of the Pack went to the fire that made the room too hot. There was a pot by it, and he poked it away from the fire and took the lid off. Steam came out, and with it smells. Grain and roots, and a tiny bit of meat smell, almost boiled away. But I was so hungry I snuffed after it. I started to whine, but Heart of the Pack made the eye-­snarl again. So I went back to the hard chair. I sat. I waited.

He took a very long time. He took all the leather from the table and put it on a hook. Then he put the pot of grease away. Then he brought the hot pot to the table. Then he set out two bowls and two cups. He put water in the cups. He set out a knife and two spoons. From the cupboard he brought bread and a small pot of jam. He put the stew in the bowl before me, but I knew I could not touch it. I had to sit and not eat the food while he cut the bread and gave me a piece. I could hold the bread, but I could not eat it until he sat down too, with his plate and his stew and his bread.

“Pick up your spoon,” he reminded me. Then he slowly sat down in his chair right beside me. I was holding the spoon and the bread and waiting, waiting, waiting. I didn’t take my eyes off him but I could not keep my mouth from moving. It made him angry. I shut my mouth again. Finally he said, “We will eat now.”

But the waiting still had not stopped. One bite I was allowed to take. It must be chewed and swallowed before I took more, or he would cuff me. I could take only as much stew as would fit on the spoon. I picked up the cup and drank from it. He smiled at me. “Good, Fitz. Good boy.”

I smiled back, but then I took too large a bite of the bread and he frowned at me. I tried to chew it slowly, but I was so hungry now, and the food was here, and I did not understand why he would not just let me eat it now. It took a long time to eat. He had made the stew too hot on purpose, so that I would burn my mouth if I took too big a bite. I thought about that for a bit. Then I said, “You made the food too hot on purpose. So I will be burned if I eat too fast.”

His smile came more slowly. He nodded at me.

I looked at him.

“Say something back to me,” he told me.

He frowned at me and I wanted to snarl, because I had done what he told me. After a time, he got up and got a bottle. He poured something into his cup. He held the bottle out to me. “Do you want some?”

I pulled back from it. Even the smell of it stung in my nostrils.

“Answer,” he reminded me.

“No. It’s bad brandy. Blackberry brandy, very cheap. I used to hate it, you used to like it.”

I snorted out the smell. “We have never liked it."

Magali Villeneuve has been an illustrator for well over a decade, and started by painting book covers in France, her home country. She now works for many different companies and publishing houses around the world, including Wizards of the Coast, Titan Publishing, Dynamite Comics, Valve Corporation, and Fantasy Flight Games. Her work has been featured in role-playing games, video games, collectible cards games, magazines, and book covers. She has done work in the universes of George R. R. Martin's A Song of Ice and Fire, Magic: The Gathering, Dungeons & Dragons, The Lord of the Rings, Star Wars, and more. She is also the author of the dark fantasy book series La Dernière Terre in France. 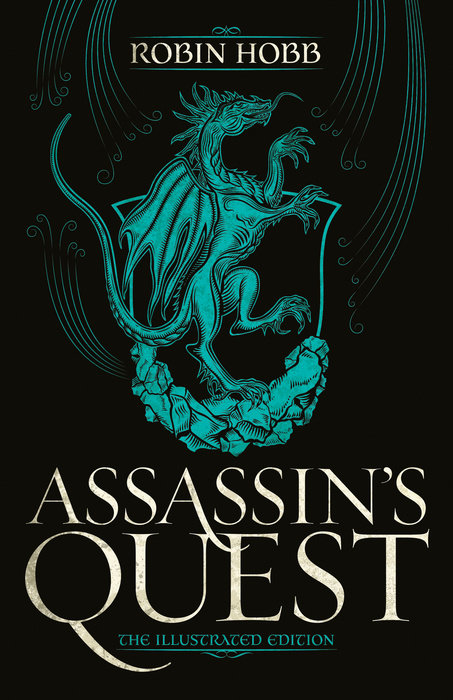