Texas Ranger Jake Kearney was astonished to discover that the "Kid" Calhoun he stalked, the same outlaw who saved him from ambush, was a woman--and an irresistible one at that! Now Anabeth Calhoun was an unwilling captive of the flinty-eyed Ranger as they pursued a gang of cold-blooded killers . . . and a cache of stolen gold that had mysteriously disappeared. But the lawman's problems had only just begun. Fighting his desire for the outlaw he had sworn would not escape justice, Jake Kearney was soon torn between his duty . . . and his love. . . .

Anabeth knew she had found her match in the rugged loner who taught her the joys of passion . . . while she taught him the exquisite perils of love. She also knew that Anabeth "Kid" Calhoun was one outlaw both willing and eager to fall into the long arms of the law!

An excerpt from Kid Calhoun

Kid Calhoun admitted to a few vices—drinking, smoking, and swearing among them—but he never cheated at cards. The Kid’s mouth flattened and his eyes narrowed at the accusation being flung across the table.

“You cheated! Nobody could have that kind of luck!” the cowboy ranted.

“Those are fighting words, mister,” the Kid said in a quiet, whiskey-laced voice.

The cowboy seemed to realize suddenly how quiet the saloon had become. He glanced around and saw his friend at the bar gesturing frantically, but he had no idea what had his compadre so upset. He looked back at the whelp sitting across the table from him. The stripling was rail thin and had a face as smooth as a baby’s behind. The Kid’s extreme youth rankled. Bluffed by a brat who was still wet behind the ears! It was humiliating. He wasn’t going to stand for it.

The Kid pulled the coins in the center of the table toward him, but his eyes stayed on the grizzled-looking cowboy. Smoke curled lazily from a cigarette caught at the corner of the Kid’s mouth. A sweat-stained hat with a silver concho band was pulled low on his forehead, shadowing his eyes. “I don’t cheat,” the Kid said. “Since I’m in a good mood, I’d be willing to accept an apology for the insult. Assuming you’re man enough to own up to being a bad loser.”

The cowboy surged out of his chair and grabbed for his gun. He stopped with his fingertips brushing leather and stared, for the Kid already held the barrel of a Colt aimed at his belly. The Kid was fast. Faster than fast. The cowboy swallowed hard. Sweat beaded on his upper lip. Ever so slowly, he moved his hand away from his side.

“I’m waiting for that apology,” the Kid said.

“Figure it was my bad luck did me in,” the cowboy conceded.

The Kid’s lip curled in the semblance of a smile. “Luck’s like that sometimes.” The Kid holstered his gun and reached for the whiskey in front of him. There was a slight movement from the cowboy, and the Kid said, “Don’t.”

“You’re thinking that you’ll be able to draw on me.” The Kid’s eyes left the cowboy and returned to the pile of coins in front of him, as though the cowboy were not standing across from him, waiting for a chance to shoot him down. “I wouldn’t bet on it. Your luck hasn’t been running too good lately.”

It was plain the cowboy wanted to draw his gun. And just as plain that the Kid wasn’t particularly worried about the prospect. The Kid continued holding the whiskey glass in his gun hand, while his other hand sorted through the pot on the table. Could the Kid really beat him to the draw under those circumstances?

The men in the saloon remained silent, waiting to see whether the cowboy would call the Kid’s bluff.

“What’s going on here? Everything all right, Kid?”

The tall man standing at the batwing doors to the saloon bore a striking resemblance to the Kid, having the same crow-wing black hair and blue eyes. But the man showed the promise of the boy. He was broad-shouldered and lean-hipped, with a voice an octave lower and a strong jaw shadowed by a day’s beard.

The cowboy welcomed the interruption like a long-lost brother. “Just a difference of opinion,” he said to the tall man. Now that the Kid had reinforcements, he could retreat without losing any more of his pride. He turned and headed for the bar where his friend was standing.

“Do you know who you was callin’ a cheat?” his friend hissed. “That was Kid Calhoun. Fast as greased lightning. He ain’t never killed a man, but it’s only a matter of time.

“Always has lots of money to spend, but nobody knows where he gets it. Says he’s got a mine down south a ways, but all you have to do is see his hands to know he ain’t workin’ no claim.

“There’s them that say the Calhouns—the Kid and his uncle—have been robbin’ stagecoaches from here to Texas. But ain’t never been nobody could peg ’em for sure. You was damned lucky to get off with a whole skin!”

The cowboy called for a rye and downed it in a gulp. He had been luckier than he’d thought.

“It’s time we were leaving, Kid,” the man at the door said. “Gather up your winnings, and I’ll meet you at the hotel.”

The Kid nodded his agreement. He finished his whiskey and dropped the coins from the table into his calfskin vest pocket as though he were in no hurry to leave. Then he stood and crossed to the door. At first, his hands hung down easily at his sides. The men in the saloon shifted uneasily when halfway to the door he slowly curled them into fists.

Little did they know the Kid had done it to hide the fact his hands were trembling. The Kid shoved his way through the batwing doors and stalked down the Santa Fe boardwalk to a boot and saddle shop halfway between the saloon and the hotel. To anyone who passed by, it appeared as though he was admiring a black saddle decorated with silver conchos displayed in the window. For a moment, he did.

Then his gaze slipped to the dressmaker’s shop next door. To the fashionable Wedgwood blue silk taffeta dress, with its frog trim decorating the fitted waist and long sleeves, and eighteen cloth-covered buttons down the front. Kid Calhoun took a deep, shuddery breath and let it out. This time things had almost gone too far. This time, he had almost had to kill a man. The day was bound to come when he wouldn’t be able to bluff his way free. Then there would be no turning back. All his hopes and dreams for the future would be lost forever.

The Kid hung his head for a moment. This charade had to stop. It had been Uncle Booth’s idea, and it had been a good one at the time, but the situation had gotten out of hand. Imagine how angry that cowboy would have been if he had realized it was not a young man who had backed him down, but a young woman! Imagine his wrath if he had realized that the Kid’s real name was Anabeth Calhoun!

Anabeth looked longingly at the stylish dress from beneath lowered lashes. She had never worn a dress, at least not that she could remember. From the age of six, Anabeth had lived in a stone house in an isolated, hidden valley southwest of Santa Fe. She had been raised by her father and her uncle, who had headed west from their farm in Pennsylvania the year her mother died. The two men had discovered Treasure Valley while prospecting for gold shortly after they arrived in New Mexico thirteen years ago.

The grassy valley, with its wealth of fresh water, had been a treasure, all right, but it was the only one they had found. The valley was a vast oval of land surrounded by impenetrable rock walls, totally invisible from the outside, and only barely accessible to humans. To this day, none of her uncle Booth’s outlaw gang knew where it was. It had provided a haven from marauding Apaches and, lately, a refuge from the law.

But her father hadn’t found much joy of it. He had been crippled in a mine cave-in when she was nine. Her uncle Booth had supposedly continued working in the Two Brothers Mine, located several miles west of the valley, eking out enough to support them. Meanwhile, she had nursed her invalid father, raised vegetables in a garden, and studied from books that Booth brought her from Santa Fe.

It wasn’t until her father’s death of pneumonia when she was sixteen that Anabeth had learned the truth about where Booth had gotten the money to support them. Her uncle hadn’t dug all that gold from the Two Brothers Mine with backbreaking labor. He had stolen it from other people. While he was supposedly off working in the mine, he had been playing cards and living the high life in Santa Fe.

In hindsight, Anabeth saw how the outlaw trail must have appealed to her uncle. As a younger brother, he had always depended on her father to lead the way—and do the bulk of the work. Booth was a dreamer and used to getting what he wanted by his wits and his charm, rather than by working for it. He had been much indulged by Anabeth’s father, who was a full fifteen years older and used to smoothing Booth’s path in life for him.

Anabeth could remember a long-ago day when her father had labored with a pick-ax while Booth sat on a stone in the shade nearby and created marvelously accurate drawings of his brother at work. Then Booth had busied himself creating truly lifelike creatures carved from wood. By the end of the day, her father had dug out a scant ounce of gold, and Anabeth had added a burro to her collection of wooden animals.

When her father had been crippled, the responsibility for supporting the three of them had fallen squarely on Booth’s shoulders. To his credit, Booth hadn’t shirked his duty. He had simply found an easier way of providing for them that didn’t require the sweat of his brow. 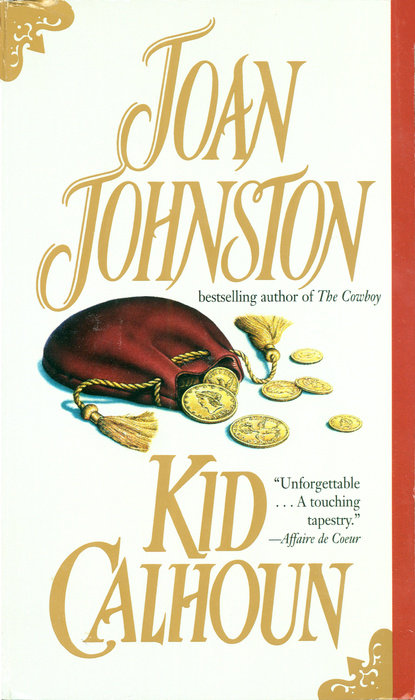