Barack Obama has inspired millions of people around the world–and an unwavering chorus of those admirers are children. This delightfully charming collection includes more than two hundred letters that kids have written to President Obama. Some of these messages are humorous, some are heartwarming, all of them are sincere–making this volume the perfect gift for any occasion.

The children ask questions: “Why did you want to be president?” “Do you think you could pass a law making chocolate a vegetable in our country?” They give suggestions: “I think you should fix things in the world to be more fair.” They offer advice: “You should bring a yo-yo to the White House.” They share hopes: “I want you to care about schools. I am in kindergarten.” They even volunteer expertise: “I will help you learn to bowl because you don’t know how to bowl.”

Whether discussing such weighty issues as the “econimical” crisis, the environment, and alternative energy or simply giving shout-outs to First Daughters Sasha and Malia, these kid correspondents express, as only children can, pure optimism, avid curiosity, and unadulterated elation about this historic moment. Complete with original illustrations by the letter writers themselves, and wonderful reproductions of some of the kids’ handwritten messages, this marvelous book–a true message of hope for our time–is a keepsake for the whole family to enjoy.

An excerpt from Kids' Letters to President Obama

Forty-six years ago I edited Kids' Letters to President Kennedy, who was, until now, the American president most admired by children. Without the Internet, without email, faxes, or even easily available photocopiers, there was only one way to compile a book like this: I had to go to the White House.

Can you imagine calling the White House now, in 2009, and asking if you could sit in the mailroom for a day or two to go through the letters they received from children for a book you wanted to compile? But that's exactly what I did. I called the White House. It was a vastly different world back then. When I called I was put through to the president's press secretary, Pierre Salinger, who thought that Kids' Letters to President Kennedy was a terrific idea. “Come on down,” he said.

When I arrived at the White House, a marine guard asked for identification. Not being a licensed driver, all I had was a photostat, as they were called, of my army discharge paper. That was good enough and I was ushered into the White House mailroom.

Lacking a portable scanner, digital camera, or any instrument other than a pen and paper, I had to copy each letter by hand. It was slow going, as you can imagine, so at 6:00 pm when the White House mailroom was about to close, I still had hours of transcribing to do. I asked if I could stay to continue my work. “Yes” was the answer. “Just turn out the light when you're done.”

And that's how Kids' Letters to President Kennedy was done.

While we had all the speed and convenience of technology to help us put together Kids' Letters to President Obama, I think one thing is still very much the same: the smart, funny, idealistic, and ingenious kids who are the authors. That shines through in their letters to the president just as brightly now as it did in 1962.

I‘ve written or edited more than twenty books and I can't think of one that has brought me as much joy as Kids' Letters to President Obama. The sheer outpouring of excitement, hope, and inspiration is overwhelming. From concerns about littering and pollution to wondering what it will be like to be the first African American President; from suggestions on how to care for a dog in the White House to ideas for making America a better place; telling the president what their own life is like, these letters touch the mind and the heart. The thoughtfulness and genuineness in these children's minds is evident in their letters.

You'll also note that some of the kids' letters include their spelling mistakes, while others, even from very young children, are error-free. Our general rule was to present the letter with the child's inventive spelling preserved; however, if the parents had already fixed the kids' mistakes or took down the letter from the child's dictation, then the letter is presented as edited. At the back of this book you will find a glossary just in case you need help with the translation from kids' English to standard English.

The ideas, of course, are completely the kids' own. They love to suggest how to make the world better. Some of the children's ideas may seem a bit goofy (but then again so are some of the ideas that adults have about trying to run our government); some of these ideas are, well, let's just say less than practical. But some are brilliant! President Obama may want to put Kids' Letters to President Obama by his night table for inspiration and reference.

I hope you enjoy reading Kids' Letters to President Obama, and I hope that this book brings a smile to your face, as it did to mine. In a way, this book has been forty-six years in the making. I know that President Kennedy would have been proud to have read it.

Almost every letter sent to President Obama included an expression of congratulations. But some went beyond that to tell, often in the most charming and enthusiastic way, what that unique moment in history meant to that child.

Most of these kids have only known one president in their lifetime before Barack Obama, so they don't have the sense of history that comes with being older and having so many more memories of the past. Nor have they studied much, if anything, of past presidents in school. Still, many of these young correspondents seem to have grasped as thoroughly as any adult the meaning of Barack Obama's unprecedented victory on election night. And we have no doubt that they will all remember for the rest of their lives what they were doing on the night of November 4, 2008.

Dear President Obama,
I think it is awesome to be our new President because I think you are going to make a ton of smart choices. I think you will be our goodest President.

When I grow up, I want to be President too. I think it would be fun and helpful to other people. I think I would be good at being a President because I help people move things around, give people the answers to questions they want to know, and when people are lonely, I play with them.

Dear President Obama,
So your dad is from Kenya. So am I. HOW EXCITING. Did you know that Kenya had a national holiday because you kind of came from Kenya?

It would be so cool if I had a playdate with your daughters. How exciting would that be!

You are going to be a terrific, trying-hard president. Go ahead and do your job. Bye!!

Dear Mr. Obama,
My mom and dad woke me up in the middle of the night to see your acceptance speech on TV. It is an important time in history because you're the first black president. I am black and my brother is black, but my mom and dad are white. Now I know I can be a president, too!

Dear President Obama,
Before you were elected I put you on my dream board!! That is a board that you put something you want on it!!! When I knew you were president, I called my neighbors, but they did not answer so I yelled “Obama Won” on their answering machines.

Thank you
For being
Our President!!
Sincerely,
Sofía, age 9
Portland, OR

Thank you for everything, Obama. I am so happy that you are my president and you are the first black president. I am black, too.

Dear President Obama,
Congratulations on winning the White House. You're the best president in the world.
You ROCK!!!

Dear President Obama,
It is such an amazing and extraordinary honor to be alive for such a revolutionary experience in my lifetime. I remember the months of your candidacy. All the children at my school wanted you to win so badly. The night of November 4, at 8:00 pm, I remember flipping through channels. At that moment, my dad ran into the room yelling “Obama won!” I was so happy. My father told me that he never thought in his lifetime that our nation will have an African American president. It's not even about race. It's that our nation can overcome the discrimination and prejudice. It's the fact we can agree to make a better place.

Thank you for the assurance that you can bring our nation's best possible future.

Dear President Obama,
I would like to start off by saying congratulations on winning the presidency. Even though I was originally a Clinton fan, I am very excited that you are my president. Although I am only a thirteen year old girl living in rural Vermont, I am aware of the world around me. Over the last eight years I have grown more and more annoyed with the current condition that American is in. I trust that you will do your best to get us out of this slump and back on track.

Dear President Obama,
Hello, my name is Andrew and I am 10 years old. I live in Fargo, North Dakota and was able to see you when you visited our city. My dad and I stood in line for two hours to get tickets and even longer when we went to see you. But it was worth it—I think you waved at me! I voted for you in my fourth grade class mock-election, but you didn't win. I was so happy that you won the real election and now lead America.

I know my life will be better because you are president. I would like you to help stop global warming and hope you bring back the electric car. I would like it if you could make a law against littering in the ocean. I want the war in Iraq to stop and hope you can do something about that. It would be good if you could help doctors make cures for some of the diseases. 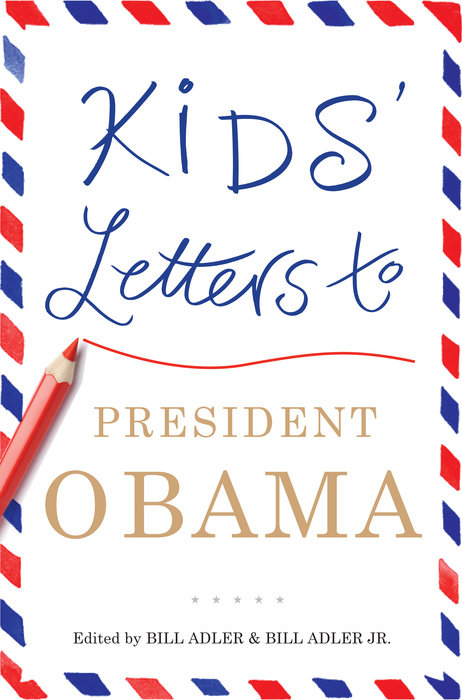