In this essential Star Wars Legends novel, the second in the Darth Bane trilogy, the fearsome Sith lord takes on a deadly new apprentice.

Darth Bane’s twisted genius made him a natural leader among the Sith–until his radical embrace of an all-but-forgotten wisdom drove him to destroy his own order . . . and create it anew from the ashes. As the last surviving Sith, Darth Bane promulgated a harsh new directive: the Rule of Two.

Two there should be; no more, no less.
One to embody the power, the other to crave it.

Now Darth Bane is ready to put his policy into action and thinks he has found the key element that will make his triumph complete: a student to train in the ways of the dark side. Though she is young, Zannah possesses an instinctive link to the dark side that rivals his own. With his guidance, she will become essential in his quest to destroy the Jedi and dominate the galaxy.

Peace is a lie. There is only passion. Through passion, I gain strength. Through strength, I gain power. Through power, I gain victory. Through victory, my chains are broken. The Code of the Sith

Darth Bane, the only Sith Lord to escape the devastation of Kaan’s thought bomb, marched quickly under a pale yellow Ruusan sun, moving steadily across the bleak, war-torn landscape. He was two meters tall, and his black boots covered the ground in long, sweeping strides, propelling his large, powerfully muscled frame with a sense of urgent purpose. There was an air of menace about him, accentuated by his shaved head, his heavy brow, and the dark intensity of his eyes. This, even more than his forbidding black armor or the sinister hook-handled lightsaber dangling from his belt, marked him as a man of fearsome power: a true champion of the dark side of the Force.

His thick jaw was set in grim determination against the pain that flared up every few minutes at the back of his bare skull. He had been many kilometers away from the thought bomb when it detonated, but even at that range he had felt its power reverberating through the Force. The aftereffects lingered, sporadic bursts shooting through his brain like a million tiny knives stabbing at the dark recesses of his mind. He had expected these attacks to fade over time, but in the hours since the blast, their frequency and intensity had steadily increased.

He could have called on the Force to keep the pain at bay, cloaking himself in an aura of healing energy. But that was the way of the Jedi, and Bane was a Dark Lord of the Sith. He walked a different path, one that embraced suffering, drawing strength from the ordeal. He transformed the pain into anger and hate, feeding the flames of the dark side until his physical aspect seemed almost to glow with the fury of a storm it could barely contain.

The terrifying image Bane projected contrasted sharply with the small figure that followed in his wake, struggling to keep up. Zannah was only ten, a waif of a girl with short, curly blond hair. Her clothing was simple and plain to the point of being rustic: a loose-fitting white shirt and faded blue coveralls, both torn and stained from weeks of continuous wear. Anyone who saw her scampering along after Bane’s massive, black-clad form would have been hard-pressed to imagine she was the Sith Master’s chosen apprentice. But looks could be deceiving.

There was power in the child. He’d seen ample proof of that at their first meeting, less than an hour earlier. Two nameless Jedi were dead by her hand. Bane didn’t know all the details surrounding their deaths; he had arrived after the fact to find Zannah crying over the body of a bouncer, one of the telepathic, green-furred species native to Ruusan. The still-warm corpses of the Jedi had been sprawled beside her, their heads lolling at grotesque angles atop broken necks.

Clearly the bouncer had been the child’s friend and companion. Bane surmised that the Jedi must have inadvertently killed the bouncer, only to meet a similar fate when Zannah exacted her revenge. Unaware of her power, they’d been caught off guard when the child—driven by mind-numbing grief and pure, abject hatred—had unleashed the full fury of the dark side on the men who’d slain her friend.

They were victims of cruel misfortune: in the wrong place at the wrong time. Yet it would have been inaccurate to call their deaths pointless. In Bane’s eyes, at least, their sacrifice had allowed him to recognize the young girl’s potential. To some the series of events would have seemed preordained, as if the hapless Jedi had been inexorably drawn to their grim end with the sole purpose of uniting Bane and Zannah. No doubt there were even those who would profess that fate and the dark side of the Force had conspired to present the Master with a suitable apprentice. Bane, however, was not one of them.

He believed in the power of the Force, but he also believed in himself: He was more than just a servant of prophecy or a pawn of the dark side, subject to the whims of an inevitable, inescapable future. The Force was a tool he had used to forge his own destiny through strength and cunning. He alone among the Sith had truly earned the mantle of Dark Lord, which was why he alone among them still lived. And if Zannah was worthy of being his apprentice, she would eventually have to prove herself, as well.

He heard a grunt behind him and turned back to see that the girl had tumbled to the ground, falling in her haste to try to keep up with the relentless pace he’d set. She glared at him, anger etched across her features.

“Slow down!” she snapped. “You’re going too fast!”

Bane clenched his teeth as a fresh bolt of pain ripped through his skull. “I am not going too fast,” he replied, keeping his voice even but stern. “You are going too slow. You must find a way to keep up.”

She scrambled to her feet, swatting at the scuffed knees of her overalls to wipe away the most obvious traces of dirt. “My legs aren’t as long as yours,” she replied crossly, refusing to back down. “How am I supposed to keep up?”

The girl had spirit. That had been clear from the moment of their first meeting. She had recognized Bane instantly for what he was: one of the Sith, sworn enemy of the Jedi, a servant of the dark side. Yet she had shown no fear. In Zannah, Bane had seen the potential for the successor he needed, but she had obviously seen something she wanted in him, too. And when he had offered her the chance to be his apprentice, to study and learn the ways of the dark side, she hadn’t hesitated.

He wasn’t yet certain why Zanah had been so eager to ally herself with a Lord of the Sith. It could have been a simple act of desperation: She was alone, with nowhere else to turn for her survival. Or maybe she saw the dark side as a path to vengeance against the Jedi, a way to make them all suffer for the death of her bouncer friend. It was even possible she had simply sensed Bane’s power and lusted to claim it as her own.

Whatever her true motivations, Zannah had been more than willing to swear fealty to the Sith and her new Master. However, it was neither her spirit nor her willingness that made her worthy of being his apprentice. The Dark Lord had chosen her for one reason, and one reason only.

“You are strong in the Force,” he explained, his voice still betraying no hint of emotion or the agony he endured. “You must learn to use it. To call on its power. To bend it to your purpose. As you did when you killed the Jedi.”

He saw a flicker of doubt cross her face. “I don’t know how I did that,” she muttered. “I didn’t even mean to do it,” she continued, suddenly uncertain. “It just sort of . . . happened.”

Bane detected a hint of guilt in her voice. He was disappointed, but hardly surprised. She was young. Confused. She couldn’t truly understand what she had done. Not yet.

She hesitated, then shook her head. “I don’t want to,” she whispered.

The girl had already endured immeasurable pain and suffering since her arrival on Ruusan. She had no wish to revisit those awful experiences. Bane understood; he even sympathized with her. He, too, had suffered during his childhood, a victim of countless savage beatings at the hands of Hurst, his cruel and abusive father. But he had learned to use those memories to his advantage. If Zannah was to become the heir to the dark side’s legacy, she had to confront her past. She had to learn how to draw upon her most painful memories. She had to transform and channel them to allow her to wield the power of the dark side.

“You feel sorry for those Jedi now,” Bane said, his voice casual. “You feel regret. Remorse. Maybe even pity.” The easy tone fell away quickly as his voice began to rise in both volume and intensity. “But these are worthless emotions. They mean nothing. What you need to feel is anger!”

He took a sudden step toward her, his right fist clenched before him to punctuate his words. Zannah flinched at the unexpected movement, but didn’t retreat.

“Their deaths were not an accident!” he shouted as he took another step forward. “What happened was not some mistake!”

A third step brought him so close that the shadow of his massive frame enveloped the girl like an eclipse. She cowered slightly but held her ground. Bane froze, blocking out the pain in the back of his skull and reining in his fury. He crouched down beside her and relaxed his clenched fist. Then he reached out slowly with his hand and placed it gently on her shoulder.

Zannah dropped her head, her eyes closed. For several seconds she was still and silent, forcing her mind to relive the moment. Bane saw the emotions crossing her face: grief, sorrow, loss. Beneath his massive hand on her frail shoulder, she trembled slightly. Then, slowly, he felt her anger begin to rise. And with it, the power of the dark side. 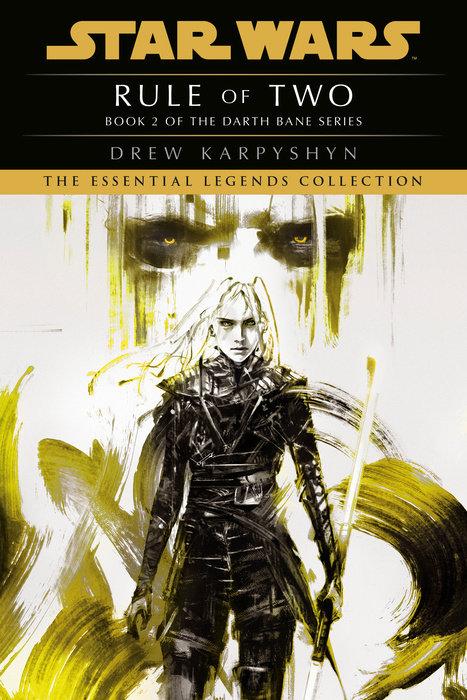