A Novel of the Old Republic

The future of the dark side hangs in the balance in the stunning conclusion to the Darth Bane series.

Twenty years have passed since the Sith and their endless rivalries were eradicated and replaced with the Rule of Two. Darth Bane now reigns alongside his young acolyte, Zannah, who must study and train in the dark side of the Force until the time comes to strike down her master and claim the mantle for herself.

But Bane’s brutal new regime has one potential fatal flaw—how will their legacy continue if an apprentice fails to raise their blade in combat? The only solution must be for the Dark Lord of the Sith to rediscover a long-forgotten secret of the order—the key to immortality.

Bane’s doubt spurs his young apprentice into action, and Zannah vows to destroy her master at any cost. After he mysteriously vanishes, she tracks him across the galaxy to a desolate desert outpost, where the fate of the dark side will be forged by a final fight to the death.


". . . adhering to the rules established through the procedures outlined in the preceding, as well as all subsequent, articles. Our sixth demand stipulates that a body of . . ."

Medd Tandar rubbed a long-fingered hand across the pronounced frontal ridge of his tall, conical cranium, hoping to massage away the looming headache that had been building over the last twenty minutes.

Gelba, the being he had come to the planet of Doan to negotiate with, paused in the reading of her petition to ask, "Something wrong, Master Jedi?"

"I am not a Master," the Cerean reminded the self-appointed leader of the rebels. "I am only a Jedi Knight." With a sigh he dropped his hand. After a moment's pause he forced himself to add, "I'm fine. Please continue."

With a curt nod, Gelba resumed with her seemingly endless list of ultimatums. "Our sixth demand stipulates that a body of elected representatives from the mining caste be given absolute jurisdiction over the following eleven matters: One, the determination of wages in accordance with galactic standards. Two, the establishment of a weekly standard of hours any given employee can be ordered to work. Three, an approved list of safety apparel to be provided by . . ."

The short, muscular human woman droned on, her voice echoing strangely off the irregular walls of the underground cave. The other miners in attendance-three human men and two women crowding close to Gelba-were seemingly transfixed by her words. Medd couldn't help but think that, should their tools ever fail, the miners could simply use their leader's voice to cut through the stone.

Officially, Medd was here to try to end the violence between the rebels and the royal family. Like all Cereans, he possessed a binary brain structure, allowing him to simultaneously process both sides of a conflict. Theoretically, this made him an ideal candidate to mediate and resolve complex political situations such as the one that had developed on this small mining world. In practice, however, he was discovering that playing the part of a diplomat was far more trying than he had first imagined.

Located on the Outer Rim, Doan was an ugly, brown ball of rock. More than 80 percent of the planetary landmass had been converted into massive strip-mining operations. Even from space, the disfigurement of the world was immediately apparent. Furrows five kilometers wide and hundreds of kilometers long crisscrossed the torn landscape like indelible scars. Great quarries hewn from the bedrock descended hundreds of meters deep, irreparable pockmarks on the face of the planet.

From within the smog-filled atmosphere, the ceaseless activity of the gigantic machines was visible. Excavation equipment scurried back and forth like oversized insects, digging and churning up the dirt. Towering drilling rigs stood on mechanical legs, tunneling to previously unplumbed depths. Gigantic hovering freighters cast shadows that blotted out the pale sun as they waited patiently for their cavernous cargo holds to be filled with dirt, dust, and pulverized stone.

Scattered across the planet were a handful of five-kilometer-tall columns of irregular, dark brown stone several hundred meters in diameter. They jutted up from the ravaged landscape like fingers reaching for the sky. The flat plateaus atop these natural pillars were covered by assemblages of mansions, castles, and palaces overlooking the environmental wreckage below.

The rare mineral deposits and rampant mining on Doan had turned the small planet into a very wealthy world. That wealth, however, was concentrated almost exclusively in the hands of the nobility, who dwelled in the exclusive estates that towered above the rest of the planet. Most of the populace was made up of Doan society's lower castes, beings condemned to spend their lives engaged in constant physical labor or employed in menial service positions with no chance of advancement.

These were the beings Gelba represented. Unlike the elite, they made their homes down on the planet's surface in tiny makeshift huts surrounded by the open pits and furrows, or in small caverns tunneled down into the rocky ground. Medd had been given a small taste of their life the instant he stepped from the climate-controlled confines of his shuttle. A wall of oppressive heat thrown up from the barren, sun-scorched ground had enveloped him. He'd quickly wrapped a swatch of cloth around his head, covering his nose and mouth to guard against the swirling clouds of dust that threatened to choke the air from his lungs.

The man Gelba had sent to greet him also had his face covered, making communication all the more difficult amid the rumbling of the mining machines. Fortunately, there was no need to speak as his guide led him across the facility: the Jedi had simply gawked at the sheer scope of the environmental damage.

They had continued in silence until reaching a small, rough-hewn tunnel. Medd had to crouch to avoid scraping his head on the jagged ceiling. The tunnel went for several hundred meters, sloping gently downward until it emerged in a large natural chamber lit by glow lamps.

Tool marks scored the walls and floor. The cavern had been stripped of any valuable mineral deposits long before; all that remained were dozens of irregular rock formations rising up from the uneven floor, some less than a meter high, others stretching up to the ceiling a full ten meters above. They might have been beautiful had they not all been the exact same shade of dull brown that dominated Doan's surface.

The makeshift rebel headquarters was unfurnished, but the high ceiling allowed the Cerean to finally stand up straight. More importantly, the underground chamber offered some small refuge from the heat, dust, and noise of the surface, enabling them all to remove the muffling cloth covering their faces. Given the shrillness of Gelba's voice, Medd was debating if this was entirely a good thing.

"Our next demand is the immediate abolition of the royal family, and the surrender of all its estates to the elected representatives specified in item three of section five, subsection C. Furthermore, fines and penalties shall be levied against-"

"Please stop," Medd said, holding up a hand. Mercifully, Gelba honored his request. "As I explained to you before, the Jedi Council can do nothing to grant your demands. I am not here to eliminate the royal family. I am only here to offer my services as a mediator in the negotiations between your group and the Doan nobility."

"They refuse to negotiate with us!" one of the miners shouted.

"Can you blame them?" Medd countered. "You killed the crown prince."

"That was a mistake," Gelba said. "We didn't mean to destroy his airspeeder. We only wanted to force it into an emergency landing. We were trying to capture him alive."

"Your intentions are irrelevant now," Medd told her, keeping his voice calm and even. "By killing the heir to the throne, you brought the wrath of the royal family down on you."

"Are you defending their actions?" Gelba demanded. "They hunt my people like animals! They imprison us without trial! They torture us for information, and execute us if we resist! Now even the Jedi turn a blind eye to our suffering. You're no better than the Galactic Senate!"

Medd understood the miners' frustration. Doan had been a member of the Republic for centuries, but there had been no serious efforts by the Republic Senate or any governing body to address the injustices of their societal structure. Comprising millions of member worlds, each with its own unique traditions and systems of government, the Republic had adopted a policy of noninterference except in the most extreme cases.

Officially, idealists condemned the lack of a democratic government on Doan. But historically the population had always been granted the basic necessities of life: food, shelter, freedom from slavery, and even legal recourse in cases where a noble abused the privileges of rank. While the rich on Doan undoubtedly exploited the poor, there were many other worlds where the situation was much, much worse.

However, the reluctance of the Senate to become involved had not stopped the efforts of those who sought to change the status quo. Over the last decade, a movement demanding political and social equality had sprung up among the lower castes. Naturally, there was resistance from the nobility, and recently the tension had escalated into violence, culminating in the assassination of the Doan crown prince nearly three standard months earlier.

In response, the king had declared a state of martial law. Since then, there had been a steady stream of troubling reports supporting Gelba's accusations. Yet galactic sympathy for the rebels was slow to build. Many in the Senate saw them as terrorists, and as much as Medd sympathized with their plight, he was unable to act without Senate authority.

The Jedi were legally bound by galactic law to remain neutral in all civil wars and internal power struggles, unless the violence threatened to spread to other Republic worlds. All the experts agreed there was little chance of that happening.

"What is being done to your people is wrong," Medd agreed, choosing his words carefully. "I will do what I can to convince the king to stop his persecution of your people. But I cannot promise anything."

"Then why are you here?" Gelba demanded.

Medd hesitated. In the end, he decided that straightforward truth was the only recourse. "A few weeks ago one of your teams dug up a small tomb."

A Novel of the Old Republic 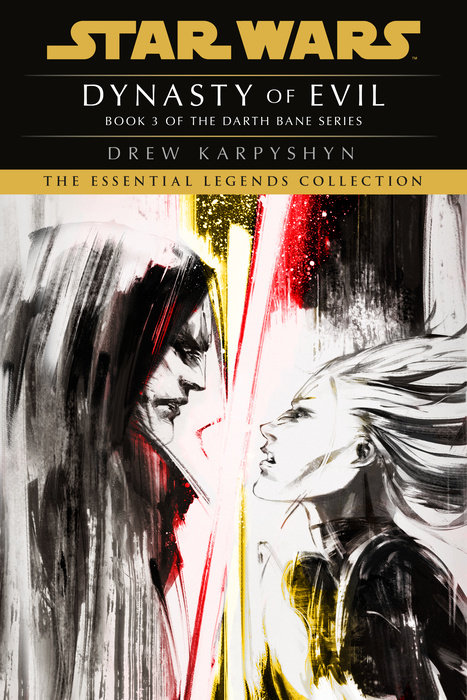