The acclaimed author of the bestselling Jane Austen mysteries brings rich historical immediacy to an enthralling new suspense novel centered around Queen Victoria’s troubled court…and a secret so dangerous, it could topple thrones.

Windsor Castle, 1861. Prince Albert, the Queen’s Consort, lies dying, and Victoria summons Patrick Fitzgerald, the clever, embittered Irish barrister who helped defend Her Majesty from a would-be assassin twenty years earlier. Within hours, Fitzgerald’s beautiful ward is nearly murdered, his chambers are ransacked, and another girl lies dead. Could an unknown force at Windsor want Fitzgerald silenced? And why? The answers are entangled in an electrifying tale of intrigue, seduction, and betrayal, partially narrated by Europe’s most powerful monarch.

As fascinating as the Queen herself, seamlessly blending history and suspense, A Flaw in the Blood is an elegant thriller that is utterly convincing—and utterly surprising—to its very end.

An excerpt from A Flaw in the Blood

The carriage made little sound as it rolled beneath the iron portcullis of Windsor; the harness and wheels were wrapped in flannel, the paving stones three inches deep in sawdust. But its arrival fell upon the place like an armed attack, shaking the ostlers out of their torpor. They sprang to the horses’ heads before the equipage had even pulled to a halt, as though Patrick Fitzgerald brought tidings of war.

Fitzgerald made no move to step down into the sawdust. His hands were thrust in his coat pockets for warmth, his eyes fixed on the flaming torches and silent men beyond the carriage window. Once before, he had been to the great stone pile west of London—summoned, as tonight, by the woman who ruled there. But he was thinking less of the Queen now than of the man who lay in her private apartments, shuddering with fever.

Darkness filled the carriage. Only the gleam of her eyes suggested a presence; she had drawn the hood of her cloak close about her face, like a thief.

“It may have nothing to do with you, Georgiana. You cannot always presume—”

“And what if I have something to do with it?” she interrupted. “With him?”

But she’d turned her head away, her profile outlined against the squabs. She was biting down hard on her anger, as though it were a haft of iron between her teeth.

“And she’d never let you near him,” he attempted. “You must know that.”

The coachman stumbled as he jumped from the box; the noise reverberated against the chilled stone like a gunshot, and the ostlers stared in outrage. Silence in the Old Quadrangle, in respect of the dying. Fitzgerald caught the coachman’s indrawn hiss of breath, ripe with fear, as he pulled open the door.

She didn’t attempt to argue. She would be freezing soon, he thought, despite her layers of petticoats. But Georgie would never ask for a hot brick, a brazier of coals. Her pride would kill her one day.

A footman led him into Windsor by the lower entrance, and there, too, the stone floor was blanketed with sawdust. The castle was known for its menacing silence—the vast, carpeted halls absorbed every footfall, and its people trafficked in whispers. Fitzgerald neither spoke nor offered his hand to the man who awaited him—William Jenner, court physician and eminent man of science.

“You took your time,” the doctor snapped.

Fitzgerald handed his gloves and hat to the footman before replying. “I was in Dublin but two days since.”

“And you stink to high heaven of strong spirits.”

“Would you have had me miss my dinner, then? I only received your summons at five o’clock.”

“It is nearly ten! As I say—you took your time.” Jenner’s eyes were small and close-set, his jowls turned down in perpetual disappointment. He surveyed the Irishman’s careless dress, his unkempt hair, with disfavour. “It may be that she will not receive you, now.”

“I didn’t ask for the audience.” Fitzgerald shrugged indifferently. “Is it so necessary?”

“I would not thwart her smallest wish at such an hour! I fear too much for her reason.”

“And your patient? How is he?”

Jenner had made his reputation, years ago, by distinguishing typhoid fever from its close relative, typhus. The physician was the acknowledged expert in the thing that was now killing Prince Albert.

“The Prince will rally,” Jenner said.

From the vehemence of the doctor’s words, Fitzgerald concluded that there was no hope.


He followed Jenner up a broad staircase. Through shadowy passages and paneled doors. The final hallway was remarkable for its dimness; oil lamps burned low. A pair of footmen stood immobile by one chamber. He was led beyond, to the Red Room.

“Wait,” Jenner ordered, and stalked away.

To sit would be forbidden. Indeed, it was a testament to the chaos of this night that Fitzgerald was left alone at all, in such a place—that he should have the freedom of Windsor—and for a wild instant he was tempted to fly back into the passage, to trust in the footmen’s trained invisibility, to roam at will over the seat of British power and take from it such tokens as he chose. But Patrick Fitzgerald was not quite the savage young man he’d been on his first visit more than twenty years ago. He was six-and-forty years now and had earned a dubious reputation at the Bar. His views were Liberal and his opinions on the Irish Question—the eternal Irish Question—sometimes surfaced in the London papers. For an instant, Georgie’s eyes rose before his mind and he wished with all his heart and soul that he was still raw, still young, still braced with hope. Then the rustle of silk proclaimed her coming.

“Your Majesty.” He went down on one knee.

She had taken up a position behind the sopha. The plump white hands grasped the wooden frame; had her grip been less fierce, the fingers might have trembled. She was a short woman of forty-two, with sagging cheeks and a mass of dark hair dragging at her temples; but once she had been a dab of a girl—a joyous girl, tricked out in silver net and flashing diamonds, her hand coquettish on her husband’s arm as he led her into the opera. A bruising rider on her gallops through the park—a passionate performer on the pianoforte. The unkind and malicious said she ate like a glutton. That she was given to odd fits of temper and caprice, like her mad old grandfather. They said a woman was too weak to rule. Fitzgerald knew better. Weakness had never been Victoria’s failing.

“I am here at your command.” He chose his words carefully. “Pray inform me how I may serve Your Majesty.”

With a gesture, she bade him rise. “You know of our great trouble? Of the Prince’s . . . illness?”

“You have my deepest sympathy.”

A blank expression of terror in her blue eyes; contempt as she looked at him. “We do not want your sympathy, Mr. Fitzgerald! Our doctors assure us there is every cause for hope.”

“There must be, while Prince Albert breathes.”

Her gaze slid away from his face. “He will not fight it as he ought. He has no tenacity for life. If it were I—”

“Your Majesty should have rallied days since.”

Perhaps she had been speaking only to herself. She flashed a look of pure hatred in his direction, as though he had overstepped some boundary.

“Good God, that we should waste our precious moments in this! Mr. Fitzgerald, some two decades ago you inserted yourself in our affairs, on the occasion of an attempt on our life in Green Park. You undertook, during the summer of 1840, to insinuate yourself among those who were not our friends—to purchase scurrilous information—in short, to besmirch the reputation of the Royal Family—with a view to vindicating the wretched creature who would have murdered his Queen.”

She had torn him to shreds in just this way, all those years ago. Then he was an ill-dressed solicitor’s clerk, cap crushed in his hands and heart pounding in his chest. And the dupe, Oxford, had waited to be hanged in Newgate Gaol.

“I was a servant of justice, Your Majesty!”

“You were an uncouth lackey of the Irish rabble,” she retorted. “And your late success has not improved you one whit. I know what you are, Patrick Fitzgerald. I know that you have chosen to insert yourself again in my affairs—that you will not rest until you have toppled this monarchy!”

Angry heat mounted in his cheeks. “That is a lie! Yes—though the Queen herself says it!”

She broke off. She closed her eyes, swaying slightly.

“Ravings,” Fitzgerald repeated. “The Prince has . . . wandered, in his fever?”

She sank heavily against the back of the sopha, her nails raking the silk.

“Majesty . . .” He crossed toward her, afraid she would collapse at his feet—but one upraised arm checked his steps.

“Do not even think of touching me.” She said it venomously. “Get Jenner. He will tell you what to do.”

She pulled herself upright. Drew a shuddering breath. And, without glancing again in his direction, left him.

“What is it?” Georgie asked the moment he slid into the forward seat of the coach and the muffled wheels began to turn. “What did she want? What did she ask of you?”

“I was ordered to sign a bit of paper,” he answered. “Affirming that every fact I discovered, every witness I deposed, every rumour I substantiated in the summer of 1840, was nothing more than a fabrication of my own treacherous Irish mind. And that, having repented of my calumnies, I hereby swear to lead a better life in allegiance to my Crown, so help me God—”

“Why does it matter? Why should she care about that old business? With the Prince so ill?”

“Lord alone knows. Poor thing was half out of her mind, I think.” He glanced at Georgiana—her luminous skin, her eyes filled with intelligence and fatal truth. “She talked of conspiracy. Accused me of trying again to topple the monarchy. As though I ever have!”

“There must be some mistake. A misapprehension—”

“The Prince is raving, seemingly. In his fever.”

“And when you refused to recant?”

“Jenner threatened me. Informed me my life has no more purchase than a sparrow’s.” Fitzgerald smiled faintly. “If I’d signed, of course, he’d have made me an honourary Englishman.”

Humour for Georgie’s sake, but she knew Jenner, and she seized on his significance at once.

“He was there—attending to the Prince? Then it is typhoid.” She reached impulsively for the carriage door. “We must go back, Patrick. You know I could prevent the spread of contagion—”

Fitzgerald’s heart twisted. All her passion in her beautiful eyes.

“Georgie love,” he said gently as the bells of Windsor began to toll, “the Prince is dead.”

Stephanie Barron is the author of the standalone historical suspense novels A Flaw in the Blood and The White Garden, as well as the Jane Austen mystery series. As Francine Mathews, she is the author of several novels of espionage, including The Alibi Club. She lives in Denver, Colorado. 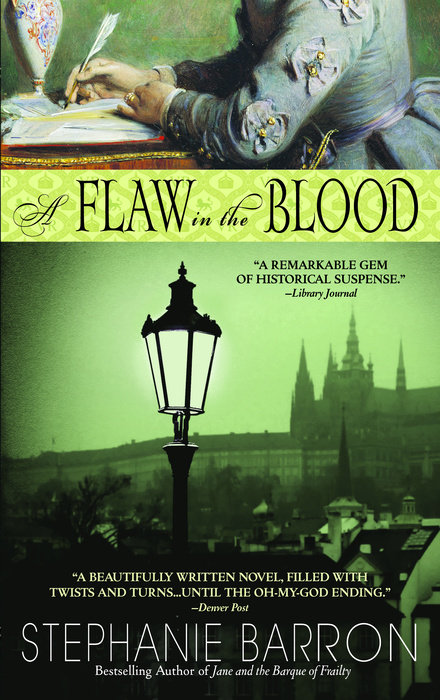