Being the Third Jane Austen Mystery

As Christmas of 1804 approaches, Jane Austen finds herself "insupportably bored with Bath, and the littleness of a town." It is with relief that she accepts a peculiar commission from her Gentleman Rogue, Lord Harold Trowbridge—to shadow his niece, Lady Desdemona, who has fled to Bath to avoid the attentions of the unsavoury Earl of Swithin.

But Jane's idle diversion turns deadly when a man is discovered stabbed to death in the Theatre Royal. Adding to the mystery is an unusual object found on the victim's body—a pendant that contains a portrait of an eye! As Jane's fascination with scandal leads her deeper into the investigation, it becomes clear that she will not uncover the truth without some dangerous playacting of her own....

An excerpt from Jane and the Wandering Eye

"'If it were done,'" he began, in the hushed tone and slow pace appropriate to murderous thought, turning before our eyes like a cage'd tiger--

"when 'tis done, then 'twere well
It were done quickly. If th' assassination
Could trammel up the consequence, and catch
With his surcease, success; that but this blow--"

(A long declining wail, as though uttered from within a tomb.)

"I have no spur
To prick the sides of my intent, but only
Vaulting ambition, which o'erleaps itself,
And falls on th' other--"

The last words, whispered and yet utterly distinct, came like the gentle slip of leaves from a November bough; and his lips had scarcely ceased to move, when the applause that was his due rang forth in strenuous tumult. Every throat swelled with praise, and the madness of cheering all but blotted out Hugh Conyngham's gentler thanks. The actor's brilliant eye, and the fever of his cheek, spoke with firmer eloquence, however; and I read in his looks a grateful understanding. For such an one, as yet so young in the life of the stage--for he can be but thirty--to take his place among the Garricks and the Kembles, if only in the estimation as yet of Bath, must seem like glory, indeed.

The cheering did not cease; the clapping hands acquired a measured beat; and it seemed as though Hugh Conyngham must bow to the desire of the guests, and speak on--when the tenor of the hoarsest cries declined by an octave, and gained a sudden accent of horror and dismay. The acutest attention o'erspread the actor's face; the crowd's mood changed as perceptibly as though an icy draught had blown out the blazing fire--and I turned, to perceive a stumbling knot of bodies caught in an anteroom doorway.

"I fear some part of the Duchess's acquaintance are but too disguised in truth," I said to Anne Lefroy. "We had best make ouradieux, and summon the chairs, before this rout turns to a riot."

"Nonsense. It is nothing but a bit of theatre--the stabbing of Duncan, I suspect." She stepped towards the anteroom with the others, and protesting, I followed.

Craning on tip-toe, the better to discern the man who had stolen Hugh Conyngham's scene, I comprehended a small salon to one side of the massive drawing-room, done up in Prussian blue picked out with gold. Its double doors were thrown wide and obscured by a press of bodies. The late Duke's reception room?--Or perhaps a study? But all such observations were fleeting, for my eyes were fixed on one alone--the mettlesome Knight, my erstwhile dance partner. He strained in the grip of two stout fellows, and his reddened countenance worked in horror.

At his feet lay the White Harlequin.

The face still wore its mask, but behind the lozenge of velvet the eyes were sightless and staring. Blood pooled slowly on the Duchess's Savonnerie carpet, as though the man called Portal had wished to exchange his white-patterned stuff for the rival Harlequin's red.

I raised one hand to my lips to stifle a scream, and with the other, gripped Madam Lefroy's arm. She tensed beneath my fingers.

A woman brushed past me with a flash of black curls, and fell in supplication at the Harlequin's feet. The Medusa, Maria Conyngham. With shaking fingers she snatched at the dead man's mask.

The voice of a bereaved mother, or an abandoned wife--the soul of a woman destroyed by grief. The crowd parted to admit Hugh Conyngham to the hushed circle, and he knelt at his sister's side.

"Dead!" she cried, and fell weeping on his breast.

The voice, clear and sweet as a child's, was the Lady Desdemona's. She stood just behind Hugh Conyngham, on the edge of the crowd. The pallor of her face was extreme. But in her composure and the intensity of her dark grey eyes I saw something of the fierce Trowbridge will. Without even a look for the murdered Harlequin, she crossed to the Knight.

"Kinny, what have you done?"

"Then show me what is in your hand!"

Her brother started, and released the thing, which fell clattering to the parquet floor--a bloody knife, chased in gold, as curved and deadly as a scimitar.

Stephanie Barron is the author of the standalone historical suspense novels A Flaw in the Blood and The White Garden, as well as the Jane Austen mystery series. As Francine Mathews, she is the author of several novels of espionage, including The Alibi Club. She lives in Denver, Colorado.

Being the Third Jane Austen Mystery 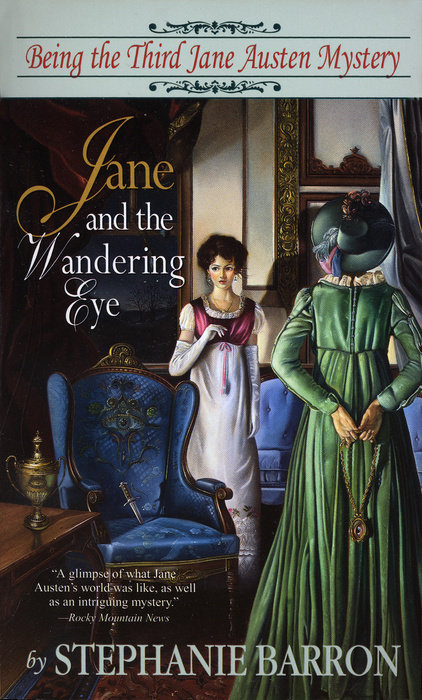