Protecting the Emotional Life of Boys

In Raising Cain, Dan Kindlon, Ph.D., and Michael Thompson, Ph.D., two of the country's leading child psychologists, share what they have learned in more than thirty-five years of combined experience working with boys and their families. They reveal a nation of boys who are hurting--sad, afraid, angry, and silent. Kindlon and Thompson set out to answer this basic, crucial question: What do boys need that they're not getting? They illuminate the forces that threaten our boys, teaching them to believe that "cool" equals macho strength and stoicism. Cutting through outdated theories of "mother blame," "boy biology," and "testosterone," the authors shed light on the destructive emotional training our boys receive--the emotional miseducation of boys.

Kindlon and Thompson make a compelling case that emotional literacy is the most valuable gift we can offer our sons, urging parents to recognize the price boys pay when we hold them to an impossible standard of manhood. They identify the social and emotional challenges that boys encounter in school and show how parents can help boys cultivate emotional awareness and empathy--giving them the vital connections and support they need to navigate the social pressures of youth.

An excerpt from Raising Cain

The Road Not Taken
Turning Boys Away from Their Inner Life

A young man is so strong, so mad, so certain, and so lost.  He has everything and he is able to use nothing."
--Thomas Wolfe, Of Time and the River


Luke, thirteen, pauses at the office door, undecided whether to take his baseball cap off or leave it alone; he pulls it off and steps in the room--the school psychologist's office.

An oversized, ancient, leathery brown Naugahyde chair dwarfs all but the largest athletes at this all-boy school.  Some boys sink deep into the chair as if hoping to distance themselves from scrutiny; others sit stiffly on its edge, clearly uncomfortable with the unnerving assignment to look inward.  In our work with boys at schools and in private practice, we see this body language all the time.  Boys approach their emotionswith much the same awkwardness, alternately sinking into the depths or sitting stiffly on the edge of feelings threaten to overwhelm them.

Luke's a "good kid."  He plays drums in the school band and makes fair grades, though they've dropped lately.  At school he's not part of the popular clique, but he does have friends.  He's not in the jock crowd and mostly steers clear of them.  So what brings him here? In the past few months Luke has grown increadingly sarcastic and sullen, and especially argumentative with his father.  A few evenings ago, concerned about his grades, his parents turned down his request to participate in an optional after-school activity.  Luke flew into a rage.  Stormed off to his room.  Slammed doors.  Kicked a hole in his bedroom wall.  His mother was stunned by the violent outburst, his father was livid, but they left him alone to cool off.  The next morning Dad left early for work, Luke had a headache and took a sick day off from school, and his mother called the school to see if anyone there might know what's troubling him.  Luke's advisor suggested the counseling visit.

Now here we sit, and Luke is bothe nervous and angry at the prospect of talking about any of this, but most especially about his feelings.  He has pushed himself back and sideways into the chair as far as he can go.  His KEEP OUT sign is clearly posted.

The declining grades and the escalating hostility at home--especially the explosive outburst--are red flags of concern to everyone but Luke. "I'm fine," he says defiantly, while his eyes flash with anger at having been sent here at all.

As we talk, the questions cruise the perimeter of his life: academics, music, friendships, family.  His answers are curt, cautious,a nd begrudging, puncuated with shrugs and a steely expression intended to keep the conversation from moving any closer than that outer edge.  He doesn't have an explanation for his recent behavior, and although he reluctantly agrees that talking about feelings might help, he shies away from it. "I just need to work harder," he syas, shifting the focus to his grades."I don't need help.  I'm not crazy," he says.  "My parents are the ones with the problem."

But we're here to talk about Luke's feelings. He offers a candid, perfunctory assessment of home and school life: His eight-year-old sister is an idiot.  His older brother is a jerk.  His father, a businessman, isn't around much--gone early, home late most days.  His mother treats hime like a five-year-old and pisses him off with all her questions.  And although he has friends and likes a few of his teachers, for the most part, school sucks.  That about covers it.

"About the other night.  The rage and that hole in the bedroom wall.  You must have been prety mad to do that?"


Luke looks wary, and even a little scared.  He shrugs.


Luke quickly looks down, and his eyes begin to well up with tears. Clearly his is hurting, but it is masked in the toughness that fills his voice: "I don't know.  Maybe, I guess."

"Let's see if we can figure out what's making you feel so bad."

Every troubled boy has a different story, but their stories share a disturbing theme of emotional ignorance and isolation.  Each day we try to connect withboys like Luke, who are unversed in the subtleties of emotional language and expression and threatened by emotional complexity.  When we ask them to open up, most, like Luke, respond with the same "fight-or-flight" response we all have to threatening situations.  We see boys who, frightened or saddened by family discord, experience those feelings only as mounting anger or an irritable wish that everyone would "just leave me alone." Shammed by school problems or stung by criticism, they lash out or withdraw emotionally.

A boy's world is full of contraditions, and parents are often at a loss to figure out how best to help.  One mother asks how she can offer wise counsel to her eight-year-old son, when her advice to "use words" instead of physical aggression only earns him teasing and abuse from his peers.  Another wants to know how she can get through to her brooding eleven-year-old when he fends off her attempts to make conversation: "Now everythin's an argument--we argue more than we talk--and even when I know something's bothering him, he won't talk about his feelings--just like my husband." A father asks how he is supposed to help his teenage son when the boy "won't listen" or is openly hostile.

A boy longs for connection at the same time he feels the need to pull away, and this opens up an emotional divide.  This struggle between his need for connection and his desire for autonomy finds different expression as a boy grows.  But, regardless of their age, most boys are ill-prepared for the challenges along the road to becoming an emotionally healthy adult.  Whatever role biology plays (and that role is by no means clear) in the ways boys are characteristically different from girls in their emotional expression, those differences are amplified by a culture that supports emotional development of girls and discourages it for boys.  Stereotypical notions of masculine toughness deny a boy his emotional resources.  We call this process, in which a boy is steered away from his inner world, the emotional miseducation of boys.  It is a training away from healthful attachment and emotional understanding and expression, and it affects even the youngest boy, who learns quickly, for instance, that he must hide his feelings and silence his fears.  A boy is left to manage conflict, adversity, and change in his life with a limited emotional repertoire.  If your toolbox contains only a hammer, it's not a problem as long as  all your equipment is running right or repairs call only for pounding.  But as tasks grow more complex, the hammer's limitations become clear.

Michael Thompson, Ph.D., is a clinical psychologist, lecturer, consultant, and former seventh-grade teacher. He conducts workshops across the United States on social cruelty, children’s friendships, and boys’ development. With Catherine O’Neill Grace and Lawrence J. Cohen, Ph.D., he co-authored Best Friends, Worst Enemies: Understanding the Social Lives of Children and Mom, They’re Teasing Me: Helping Your Child Solve Social Problems. With Dan Kindlon, Ph.D., he co-authored the New York Times bestseller Raising Cain: Protecting the Emotional Life of Boys. He is also the author of Speaking of Boys: Answers to the Most-Asked Questions About Raising Sons. He lives in Arlington, Massachusetts.

Teresa Barker, who collaborated with Thompson on Raising Cain and Speaking of Boys, is a journalist and mother of three school-age children. She lives in Wilmette, Illinois.

Protecting the Emotional Life of Boys 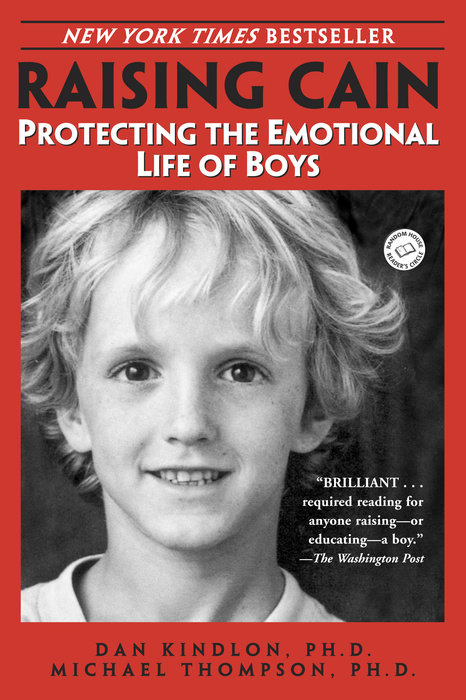