There are no rules in the dark, no place to feel safe, no escape from the shadows. But to save the day, you must seize the night.

At no time does Moonlight Bay look more beautiful than at night. Yet it is precisely then that the secluded little town reveals its menace. Now children are disappearing. From their homes. From the streets. And there’s nothing their families can do about it. Because in Moonlight Bay, the police work their hardest to conceal crimes and silence victims. No matter what happens in the night, their job is to ensure that nothing disturbs the peace and quiet of Moonlight Bay.

Christopher Snow isn’t afraid of the dark. Forced to live in the shadows because of a rare genetic disorder, he knows the night world better than anyone. He believes the lost children are still alive and that their disappearance is connected to the town’s most carefully kept, most ominous secret—a secret only he can uncover, a secret that will force him to confront an adversary at one with the most dangerous darkness of all: the darkness inside the human heart.

An excerpt from Seize the Night

Elsewhere, night falls, but in Moonlight Bay it steals upon us with barely a whisper, like a gentle dark-sapphire surf licking a beach. At dawn, when the night retreats across the Pacific toward distant Asia, it is reluctant to go, leaving deep black pools in alleyways, under parked cars, in culverts, and beneath the leafy canopies of ancient oaks.

According to Tibetan folklore, a secret sanctuary in the sacred Himalayas is the home of all wind, from which every breeze and raging storm throughout the world is born. If the night, too, has a special home, our town is no doubt the place.

On the eleventh of April, as the night passed through Moonlight Bay on its way westward, it took with it a five-year-old boy named Jimmy Wing.

Near midnight, I was on my bicycle, cruising the residential streets in the lower hills not far from Ashdon College, where my murdered parents had once been professors. Earlier, I had been to the beach, but although there was no wind, the surf was mushy; the sloppy waves didn't make it worthwhile to suit up and float a board. Orson, a black Labrador mix, trotted at my side.

Fur face and I were not looking for adventure, merely getting some fresh air and satisfying our mutual need to be on the move. A restlessness of the soul plagues both of us more nights than not.

Anyway, only a fool or a madman goes looking for adventure in picturesque Moonlight Bay, which is simultaneously one of the quietest and most dangerous communities on the planet. Here, if you stand in one place long enough, a lifetime's worth of adventure will find you.

Lilly Wing lives on a street shaded and scented by stone pines. In the absence of lampposts, the trunks and twisted branches were as black as char, except where moonlight pierced the feathery boughs and silvered the rough bark.

I became aware of her when the beam of a flashlight swept back and forth between the pine trunks. A quick pendulum of light arced across the pavement ahead of me, and tree shadows jumped. She called her son's name, trying to shout but defeated by breathlessness and by a quiver of panic that transformed Jimmy into a six-syllable word.

Because no traffic was in sight ahead of or behind us, Orson and I were traveling the center of the pavement: kings of the road. We swung to the curb.

As Lilly hurried between two pines and into the street, I said, "What's wrong, Badger?"

For twelve years, since we were sixteen, "Badger" has been my affectionate nickname for her. In those days, her name was Lilly Travis, and we were in love and believed that a future together was our destiny. Among our long list of shared enthusiasms and passions was a special fondness for Kenneth Grahame's The Wind in the Willows, in which the wise and courageous Badger was the stalwart defender of all the good animals in the Wild Wood. "Any friend of mine walks where he likes in this country," Badger had promised Mole, "or I'll know the reason why!" Likewise, those who shunned me because of my rare disability, those who called me vampire because of my inherited lack of tolerance for more than the dimmest light, those teenage psychopaths who plotted to torture me with fists and flashlights, those who spoke maliciously of me behind my back, as if I'd chosen to be born with xeroderma pigmentosum—all had found themselves answering to Lilly, whose face flushed and whose heart raced with righteous anger at any exhibition of intolerance. As a young boy, out of urgent necessity, I learned to fight, and by the time I met Lilly, I was confident of my ability to defend myself; nevertheless, she had insisted on coming to my aid as fiercely as the noble Badger ever fought with claw and cudgel for his friend Mole.

Although slender, she is mighty. Only five feet four, she appears to tower over any adversary. She is as formidable, fearless, and fierce as she is graceful and good-hearted.

This night, however, her usual grace had deserted her, and fright had tortured her bones into unnatural angles. When I spoke, she twitched around to face me, and in her jeans and untucked flannel shirt, she seemed to be a bristling scarecrow now magically animated, confused and terrified to find itself suddenly alive, jerking at its supporting cross.

The beam of her flashlight bathed my face, but she considerately directed it toward the ground the instant she realized who I was. "Chris. Oh, God."

"What's wrong?" I asked again as I got off my bike.

"No." She turned from me and hurried toward the house. "This way, here, look."

Lilly's property is ringed by a white picket fence that she herself built. The entrance is flanked not by gateposts but by matched bougainvillea that she has pruned into trees and trained into a canopy. Her modest Cape Cod bungalow lies at the end of an intricately patterned brick walkway that she designed and laid after teaching herself masonry from books.

Instead of taking me and Orson inside, Lilly quickly led us off the bricks and across the lawn. In the still night, as I pushed my bike through the closely cropped grass, the tick of wheel bearings was the loudest sound. We went to the north side of the house.

A bedroom window had been raised. Inside, a single lamp glowed, and the walls were striped with amber light and faint honey-brown shadows from the folded cloth of the pleated shade. To the left of the bed, Star Wars action figures stood on a set of bookshelves. As the cool night air sucked warmth from the house, one panel of the curtains was drawn across the sill, pale and fluttering like a troubled spirit reluctant to leave this world for the next.

"I thought the window was locked, but it mustn't have been," Lilly said frantically. "Someone opened it, some sonofabitch, and he took Jimmy away."

"Some sick bastard," she insisted.

The flashlight jiggled, and Lilly struggled to still her trembling hand as she directed the beam at the planting bed alongside the house.

"To pay ransom. I'm not rich. So no one would take Jimmy for ransom. It's worse than that."

False Solomon's seal, laden with feathery sprays of white flowers that glittered like ice, had been trampled by the intruder. Footprints were impressed in trodden leaves and soft damp soil. They were not the prints of a runaway child but those of an adult in athletic shoes with bold tread, and judging by the depth of the impressions, the kidnapper was a large person, most likely male.

I saw that Lilly was barefoot.

"I couldn't sleep, I was watching TV, some stupid show on the TV," she said with a note of self-flagellation, as if she should have anticipated this abduction and been at Jimmy's bedside, ever vigilant.

Orson pushed between us to sniff the imprinted earth.

Her usual beauty, as clear and deep as a reflection of eternity, was now shattered by terror, crazed by sharp lines of an anguish that was close to grief. She was held together only by desperate hope. Even in the dim backwash of the flashlight, I could hardly bear the sight of her in such pain.

"It'll be all right," I said, ashamed of this facile lie.

"I called the police," she said. "They should be here any second. Where are they?" 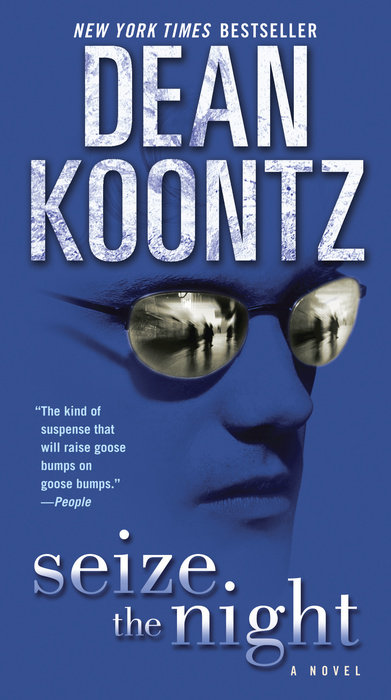