The marshal’s name was Borden Chantry. Young, lean, rugged, he’s buried a few men in this two-bit cow town—every single one killed in a fair fight. Then, one dark, grim day a mysterious gunman shot a man in cold blood. Five grisly murders later, Chantey was faced with the roughest assignment of his life—find that savage, trigger-happy hard case before he blasts apart every man in town . . . one by bloody one.

In Louis L’Amour’s Lost Treasures: Volumes 1 and 2, Beau L’Amour takes the reader on a guided tour through many of the finished and unfinished short stories, novels, and treatments that his father was never able to publish during his lifetime. L’Amour’s never-before-seen first novel, No Traveller Returns, faithfully completed for this program, is a voyage into danger and violence on the high seas.

Additionally, many beloved classics are being rereleased with an exclusive Lost Treasures postscript featuring previously unpublished material, including outlines, plot notes, and alternate drafts. These postscripts tell the story behind the stories that millions of readers have come to know and cherish.

Dawn came like a ghost to the silent street, a gray, dusty street lined with boardwalks, hitching rails and several short lengths of water trough. False-­fronted buildings alternated with others of brick or stone, some with windows showing goods for sale, some blank and empty.

A door slammed, a well pump came to life, complaining in rusty accents, then a rooster crowed . . . answered by another from across the town.

Into the end of the street rode a lone cowboy on a crow-­bait horse. He saw the sign of the Bon-­Ton Restaurant, and turned toward it, then his horse shied and he saw the body of a man lying beside the walk.

He glanced at it, dismounted, then tied his horse at the rail. He tried the restaurant door and had started to turn away when the sound of footsteps drew him back. The door opened and a pleasant voice said, “Come in. There’s coffee, breakfast ready in a few minutes.”

“I ain’t in no hurry.” The cowboy straddled a chair, accepting the coffee. “Dead man out in the street.”

“Again? Third this week. You just wait until Saturday. Saturday night’s when they let the wolves howl. You stick around.”

“I seen it here and yonder. Ain’t figurin’ on it. I’m ridin’ over to Carson an’ the steam cars.” He jerked his head toward the street. “You seen him?”

“No . . . don’t aim to. I seen a dead man. I seen two dozen of them, time to time. Ain’t nothin’ about bein’ dead pleases me. Some drunken fight, no doubt. Happens all the time.”

A woman came along the street, her heels clicking on the boardwalk. She passed the dead man, glanced back, then turned her head away and walked on to the post office.

A man crossing the street turned aside and bending over the dead man took the head by the hair and turned the face around. “Him? Prob’ly had it comin’,” he said, and walked on.

Down the street another door slammed and somebody sang, off-­key, of the streets of Laredo. Another pump started to squeak.

Finally the woman emerged from the post office, glanced at the body, then went to the door of the marshal’s office and rapped vigorously.

“Borden? Borden? Are you in there?”

A tall, young man came to the door, slipping a suspender over his shoulder. “What’s the matter, Prissy? You outa stamps?”

“There’s a dead man lying in the street, Borden Chantry, and it’s a disgrace. It . . . why, you should be ashamed! And you call yourself a marshal!”

“Wasn’t even here last night, ma’am. I was clean over on the Picketwire. Prob’ly just some drunken shootin’.”

“No matter what it was, Borden Chantry, you get that body out of the street! What’s this town coming to, anyway? Dead bodies lying around, shootings and stabbings every night. You call yourself a marshal!”

“No, ma’am, I don’t. The city council does. I only figured to be a rancher until that norther came along. Why, I was fixin’ to be a rich man come spring!”

“You an’ how many others? You get that body up, Borden, or I’ll have the committee on you.”

Borden Chantry chuckled. “Now, now, Prissy, you wouldn’t do that, would you? Why, those old biddies—­”

“Hush your mouth, Borden! If they heard you speak of them like that, why—­!” She turned around and went back to the post office.

A tall, handsome man with sandy hair stopped on the walk across the street. “What’s the matter, Bord? You in trouble?”

“Seems like. There’s a body in the street an’ our postmistress is reading the riot act over it. You’d think she’d never seen a dead man . . . at her age.”

“Less you say about age to her, the better off you’ll be, Bord.” He glanced at the body. “Who is it? Some drunk?”

“Prob’ly. I never did see so many men couldn’t handle liquor. They get to drinkin’ that block an’ tackle whiskey and right away there’s trouble.”

“Sure,” Chantry chuckled at the old joke. “One drink an’ you’ll walk a block an’ tackle anything!”

“Had breakfast, Bord? You get him off to the barn an’ come on in. I’ll stake you to some ham and eggs.”

“All right, Lang. You just hold your horses. I’ll get Big Injun. He’ll tote him off for me.”

Langdon Adams crossed the walk and entered the Bon-­Ton, seating himself at a table near the window. It was a small town but a good town, and he was at home here. It was one place he really wanted to stay, for despite the occasional brawls between cowmen and miners, it was a pleasant enough town.

He watched the old Indian back a buckboard up to the hitching rail and then saw Borden Chantry and the Indian load the dead man into the back. The Indian drove off and Borden dusted his hands off and came inside.

A fat, buxom woman came in from the kitchen. “Here! You boys start on this. Ed’s fixin’ some more ham an’ eggs. Why, we had a cowboy in here this morning that et enough for three! I never did see such a man!”

Borden Chantry walked through to the kitchen and poured water from a bucket into a wash-­pan and rinsed his hands.

“Who was he?” Ed turned from the fire, spatula in hand. “Know him?”

“Never saw him before, Ed. Nice-­lookin’ feller, though. He surely doesn’t look the part.”

Borden Chantry walked between the tables to the one near the window.

Langdon Adams looked up, smiling. “Well, how does it feel to be the marshal of a cowtown?”

“Don’t care much for it, Lang. I’d rather be ranching, but I will say the city fathers were mighty nice to offer me the job. I was really wiped out.”

“You and how many others? I never did see so many big men become small overnight. I was lucky. I hadn’t many cattle and they were down yonder in the breaks and out of the wind. I don’t think I lost over three or four head.”

“Neither did Blossom. That widow-­woman makes about as few mistakes as anybody I know. She trimmed her herds down, sold off all her scrub stuff, only kept good, sturdy stock that could last through, and they did.”

Borden glanced at his friend. “You really shinin’ up to her? Can’t says I blame you. She’s a mighty pretty woman, and she’s got the best ranch left around here. And if you buy the old Williams place—­”

“What? If you had that ranch, right next to hers, and then you two got married, you’d have about thirty sections of the best grazing in the state all to yourselves.”

Ed brought the ham and eggs himself, then refilled their cups. He sat down, straddling a chair. “You catch that horse thief, Borden?”

“Uh-­huh. He made him a good run, but I got him. He stole those two mares of Hyatt’s. He couldn’t have done worse. Why, there isn’t two horses in the state look like them, or have their quality. Worst of it was, ever’body in this part of the country knows those mares. Hyatt Johnson’s talked them up so much, and showed them around . . . A man would have to be a damn fool or a stranger to steal them.”

“A stranger. He surely doesn’t talk like any damn fool,” Chantry commented. “I come up on this camp just shy of daybreak and waited until he rolled out of bed and went into the brush. Then I just stepped up and taken his gun belt and rifle and set there a-­waitin’ when he come back. He was mighty upset.”

“Anybody got away since you been marshal, Bord?” Ed asked curiously.

“No . . . but there ain’t been but four or five I had to go after. A man steals something, I try to get him. If a man kills somebody and then cuts and runs, I take in after him and bring him back for a hearing. If a man tried to prosecute every man who has a shooting or a knifing against him, there’d be nobody in town but the preacher, an’—­”

“Preacher?” Ed scoffed. “You just don’t know the preacher. He’s had him a few scraps here and there.”

“Well . . . I don’t know about that. As long as it’s a stand-­off fight, nobody cares, and I certainly don’t feel like trying to bring a man before a judge when the jury will surely turn him loose. Killing a man in a fair fight is about the safest thing you can do around here.”

“Want to take a ride down to my place, Bord? Might get some wild turkeys.” 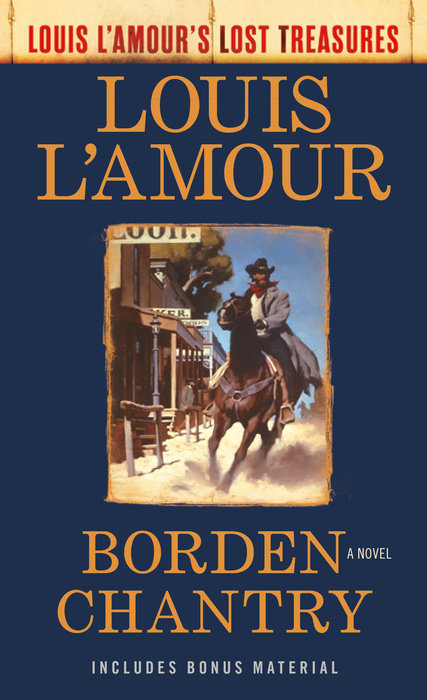