NOW A MAJOR MOTION PICTURE • This searing memoir of fraternity culture and the perils of hazing provides an unprecedented window into the emotional landscape of young men.

Reeling from a terrifying assault that has left him physically injured and psychologically shattered, nineteen-year-old Brad Land must also contend with unsympathetic local police, parents who can barely discuss “the incident” (as they call it), a brother riddled with guilt but unable to slow down enough for Brad to keep up, and the feeling that he’ll never be normal again.

When Brad’s brother enrolls at Clemson University and pledges a fraternity, Brad believes he’s being left behind once and for all. Desperate to belong, he follows. What happens there—in the name of “brotherhood,” and with the supposed goal of forging a scholar and a gentleman from the raw materials of boyhood—involves torturous late-night hazing, heartbreaking estrangement from his brother, and, finally, the death of a fellow pledge. Ultimately, Brad must weigh total alienation from his newfound community against accepting a form of brutality he already knows too well.

An excerpt from Goat

This is how it goes:

We’re getting floored at a beginning-of-the-semester party. Me, my younger brother Brett, these three people we came with. At this old fraternity house. Two stories with a big front porch and a backyard with a chain-link fence.

Brett’s on the porch standing next to me. People moving all over the place. Like cells. Everything pulsing. All sweat and smoke. The house is breathing.

These two girls come up. Just stand there looking us over. One of the girls looks at Brett like she loves him already. She’s short and has long hair pulled into a ponytail. Legs all muscled like a soccer player’s. She’s wearing a Zeppelin T-shirt with a hole beneath the neck cuff. The other girl’s standing beside her all bucktoothed and shaky. Got a tattoo on her left shoulder blade. Something swirled and tribal. Her arms crossed. I give her a smoke and she nods, cups one hand around the lighter I hold out and I can tell she’s drunk by the way her eyes wobble, the way she squints them against the porch lights. The other girl rubs the shaky one’s back, runs her hand down and pauses in the bare patch of skin between her jeans and top. The shaky girl looks her over and smiles. Brett tells them to kiss. They look at each other and laugh and then the shaky girl moves toward the other one, puts a hand around her waist and holds the cigarette out to the side. Her tongue’s out and inside the other’s mouth and they lock together, wet cheeks pulsing with the overhead light. The shaky one steps back and pulls on the smoke, exhales and looks at Brett. I’m staring at the two girls and the shaky girl asks if that was okay, and Brett says yeah that was cool, and I nod, say yeah good, and then Brett says do it again and they just laugh. The short girl says you don’t even know us and Brett says so and cocks back his beer. When he brings it down, she takes the beer from Brett and drinks. Hands it back. And now the shaky girl looks at me like she knows something about me with my skinny arms and black hair all matted from the hot air outside. Brett’s talking to the short girl and I don’t know what to say with this shaky one staring at me. The short one leans, whispers in her friend’s ear. They turn and walk away.

Brett tells me they want us to come over later.

School’s two days away, and for both Brett and me, it’s the whole college-in-the-same-town-you-went-to-high-school-in thing. It’ll be my second year, Brett’s first, and right now I’m not too happy with this small liberal arts school because it’s backward and I went to high school with most everyone there, but for right now, just right now, it’s okay because my brother’s here.

I couldn’t hack school last year at another college because I was lonely and I failed most everything. I tell everyone it was from the drugs or the alcohol but the truth is I was just lonely and cried all the time and lived in an old house with lots of dust.

This is what they say:

Didn’t like it there man? That place is fucking cool, fucking badass town man, why’d you leave man, I mean why’d you come back here?

This is what I say:

Too much, just too much.

And then they say this:

And Brett gave up a soccer scholarship upstate. He didn’t want to do the summer workout and couldn’t make up his mind about anything, and it’s lame to be here and we know it, but it’s cool and livable for a little while because just a few minutes ago Brett and I decided to leave here next semester. We got the idea a few days ago when we helped a friend move in at Clemson where everything’s huge and it’s where my grandfather went and where my dad went and after we decided Brett said fuck yeah and I said yeah fuck man.

So this party in August is the beginning of the end of our time here.

We leave after Christmas.

This party is just a party with people from all over the town, which is not really a college town even though we have a college. Brett and I aren’t in a fraternity but it doesn’t matter even though it’s a frat party because if there’s a party, any party, anyone who sees it, or knows about it, or hears about it comes, because the town’s small and there’s not much else to do.

The town’s named Florence and it’s this crumbling place in South Carolina with steel mills and railroad tracks. There’s a country club made up of all the old families and the new ones who have money. And even though Brett and I have lived here for three years we don’t come from here and our dad’s a preacher but he’s strange (not like hellfire crazy strange, or standing on a sidewalk holding a Bible up in the air strange, but just strange, like once he melted down the gold caps from his teeth and made them into a cross) and he doesn’t have enough money to be in the club and neither does my mother (she’s a school nurse and when we get sick she’s always the one who tells us we’ll be better soon, tells us what pills to eat) but occasionally we get invited to their parties because we know the sons and the daughters, and it’s always us just standing there with our cigarettes and the free booze, but we know we aren’t like them and we couldn’t marry one of the daughters because we don’t come from where their future husbands are supposed to.

Point at my chest.

That’s how it always goes. Me measuring up to my brother. He’s good-looking and all the girls swoon when they see him. Six-one. Dark skin. Brown hair. Broad shoulders. This chiseled face. My mom and dad say I’m good-looking but it’s not the same as when a girl says it.

For example: My brother and me in our grandparents’ driveway playing basketball. I am fifteen. He is fourteen. I am tall for my age, the only growth spurt I really ever have, full of acne, awkward, he is shorter and still has that boy look to him. My first cousin (two years younger, a girl) comes over with one of her friends. They stand there and look us over, hands on their hips. My cousin looks over at her friend, says what do you think about Brett, like she’s trying to set her friend up and the friend says oh he’s fine. Gnaws her fingernail. My cousin asks about me. Weird, the friend says, he’s weird. Looks at the ground.

And it isn’t just the looks. It’s everything. Brett is athletic. He makes all-state in soccer junior and senior years. I quit soccer when I am twelve. I quit tennis when I am fourteen. I am good at neither. But mostly it’s just the air about him. Like he can have anything he wants. He just needs to point.

Me seventeen. Him sixteen. Me drunk and standing by a fire. Arms crossed. Brett inside the tent, the door zipped. The tent shifting. I’m facing this girl Kathleen across the fire, her face lit orange, and we don’t know what to say to each other. Breath fogged. Brett’s head from the tent door. Then he’s standing. Kathleen’s cousin Alice leaving the tent after Brett. Brett smoking. Alice shaking. Both back inside the tent. And I keep shaking, looking over at Kathleen with the words stuck. She tells me I’m boring. I tell her I know. I sleep in the dirt beside the fire. Kathleen goes in the tent with Brett and Alice.

But I know that Brett feels sort of the same way about me. Like he wants the things I’ve got. He thinks I am creative. I can play guitar and he wants to be able to do that. I start playing guitar after I quit the violin, then the piano, then the trumpet. And he thinks I’m smart. But I’m always thinking fuck smart and creative. I just feel weird. With Brett and me it’s like this dual-adoration thing but the truth is I’d give all the stuff he wants for all the stuff I want in a heartbeat.

Brad Land studied creative writing at the University of North Carolina at Wilmington, where he received his M.F.A., and Western Michigan University, where he served as nonfiction editor of Third Coast. He has been a fellow at the MacDowell Colony and now lives in South Carolina. 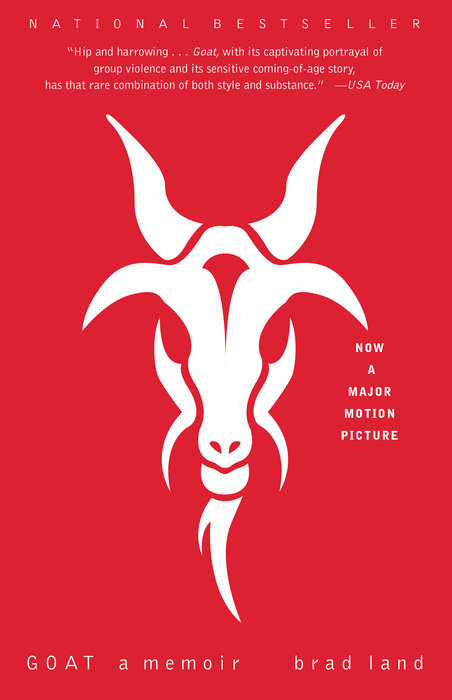