Learn the tragic origins of the wicked Arch-Illager in this official Minecraft novel, a prequel to Minecraft Dungeons!

Brave heroes have banded together to take a perilous journey through the war-torn Overworld to defeat the Arch-Illager and his formidable army. But how did that army come to be? And just where did the Arch-Illager come from?

The terrible truth behind the Arch-Illager is that he never asked for ultimate power. Known as Archie, this little Illager is bullied by his fellow Illagers and mistrusted by fearful Villagers. Archie only ever wanted a place to call home, but he finds himself shunned by all. As he wanders through deep forests and up craggy mountains, he stumbles upon a dark cavern—with a sinister secret waiting inside.

Archie discovers an object that whispers to him promises of power: the Orb of Dominance. With it, Archie realizes he can wield incredible magic and reshape a world that turned its back on him. All he needs to do is exactly what it tells him . . .

After all, it’s called the Orb of Dominance for a reason, right? But is it named for the way Archie uses it—or is it using him?

An excerpt from Minecraft Dungeons: The Rise of the Arch-Illager

Archie couldn’t stand it anymore. The so-called “hero” who had taken down the rest of his raiding party strolled off, leaving him there among a pile of his fellow dead Illagers, and he hadn’t been able to do a thing to stop it. All Archie could manage was to seethe in frustration and fury.

Sure, technically he could have picked up a sword and chased after the man, but what good would that have done? The only way that venture could end would be with Archie utterly defeated, and he’d had a rotten enough day already. He didn’t want to cap it off with that.

Instead, Archie pushed himself to his feet and surveyed the complete disaster that surrounded him. As the runt of his band of Illagers, he was used to having bad days, but this topped them all.

It was awful enough that Archie had been roped into joining the patrol designated to defend the rest of the Illagers from that marauding mob of Undead that had been wandering too close to their lands, but to wind up as the only survivor? He didn’t think he could return to the rest of the Illagers if he had to bring home news like that. Enough of them already hated him that they’d probably kick him out of the tribe, and if that happened, he didn’t have anywhere else to go.

Archie had fully expected to meet his end today at the clawing hands and teeth of a zombie or a skeleton’s arrow. The irony that he had failed at even that made him struggle to choose between laughing and crying. He decided to do both.

As he stood there, racked with sobbing guffaws, someone smacked him on the back of the head.

Archie spun about, figuring the hero had changed his mind and decided to come back and finish off the job. He almost welcomed that. At least it would put his misery to a quick end.

Instead, he found himself face-to-face with something even worse: Thord.

Thord had been Archie’s nemesis since childhood. The vicious Illager had picked on Archie relentlessly for as long back as either one of them could remember. The simple sight of Archie skulking around the dark forest in which they lived often spurred Thord to torture Archie with terrible taunts and even magical spells.

Of course, Thord usually spent whatever spare time he had plotting against someone. It didn’t take much to encourage him to ruin someone’s day. The elders in the Illagers’ woodland mansion had tried to clamp down on his tendency toward violence over the years, which perhaps explained why Archie had somehow managed to survive to this day, but they’d failed often enough that Archie flinched every time he encountered his old foe.

Unfortunately, he hadn’t scurried away fast enough that morning when the elders had called for volunteers to join the raiding party. Thord had pointed out Archie trying to slink off unseen and had insisted on dragging him along instead. “Just so I can keep an eye on you.”

The one bit of good news about everyone else in the raiding party being taken down was that Archie wouldn’t have to worry about Thord picking on him anymore. It might have been a small consolation, but he had clung to it.

But somehow Thord had survived too.

Thord snarled at Archie and staggered over toward the smaller Illager, nearly tripping over the hem of the long, dark robes that marked him as an evoker, a dangerous Illager spellcaster. Archie could see how the hero had thought he’d taken care of the Illager. He looked more than half-dead. If he’d stayed on the ground, Archie would never have suspected he was still breathing.

“Don’t just stand there gawking at me,” Thord said, his voice curdled with humiliation and disgust. “Help me out!”

Archie wanted to mock Thord in the evoker’s moment of weakness, but he worried that Thord might still have enough energy to attack him with a spell. He leaped forward to try to support the evoker, who was wobbling precariously on his feet. Weak as he was, Thord smacked Archie away with the back of his hand. The smaller Illager tumbled to the ground, clutching at his stinging cheek.

“As if a weakling like you could hold me up,” Thord said with a shaky, frustrated sneer. “Find me a staff—or at least a sword!”

“But the Undead are all destroyed, and that hero’s gone too,” Archie said, both uncertain and suspicious about Thord’s intentions.

“Lucky for him!” Thord said as he staggered forward. “And for you. Now get me that sword!”

Archie glanced around frantically and found the weapon Thord was pointing at. It was battered and notched, but at least still in one piece. He snatched it up and handed it to the evoker without bothering to clean it off.

Thord didn’t seem to care a bit about how battered it was. He just grabbed the weapon by the hilt, stabbed it into the ground, and used it as a crutch. Then, finally stabilized, he gazed out over the battlefield and frowned.

Archie didn’t say a word. He knew from experience that anything he did could send Thord into a fit of rage, and he didn’t want to trigger that. Not now for sure.

After a long moment, Thord spoke, his voice rough and low. “So, it’s just you and me then, is it?”

Thord sucked at his teeth and grimaced. “You’re going to pay for this.”

Archie’s jaw dropped. “But I didn’t have anything to do with this! I barely fought at all!”

“Exactly,” Thord said. “When your people needed you most, you curled up in a ball and ignored them while they screamed for help. They fought on valiantly while you sat there and let them be defeated.”

“I-I-I . . .” Archie couldn’t believe what Thord was saying. How could anyone think that of him? He hadn’t wanted his people to lose! True, he hadn’t done much to prevent that, but that was beyond his control. As Thord and the others had taught him over and over throughout his life, he was a weak creature who couldn’t make a difference in anything, no matter how hard he might try. And now Thord was going to hold him responsible for that?

Archie cringed in fear. “I’m worthless! I always have been. I didn’t even want to be here in the first place!”

“And that’s my point! You would have happily allowed that hero to defeat us all—the entire tribe if you’d had your choice. You don’t care about any of us. You let that hero destroy us, and don’t think I’m going to let you get away with it.”

Archie collapsed to the ground, unable to bear the horrors of the accusation. If Thord managed to limp back to the tribe and tell them such awful things about him, they’d probably destroy him on the spot. The best he’d be able to hope for would be eternal banishment.

“Oh, please no!” Archie gawked at Thord in dismay. “I knew this would go wrong. I just knew it! I told you!”

Thord scoffed at him. “Like mere words ever helped with anything.”

It pained Archie to hear a sentiment like that. As weak as he was—and as little as he knew of magic—a sword was useless to him. All he had was words.

“I knew exactly what was going to happen as soon as that hero arrived, and I tried to warn you,” Archie said, trying to explain. “I wanted to save you. I wanted to save us all!”

Thord snorted at Archie as if the pathetic Illager had just fallen into an outhouse and crawled out of the filth on his hands and knees. “You go ahead and try to tell that to the others. See what they have to say.” He started staggering back in the direction of the Illager mansion, deep in the nearby dark forest.

“Wait!” Archie said as he scampered after Thord. “Why torture me? I’m no threat to you. It’s that horrible hero you should be angry at.”

Thord didn’t bother glancing over his shoulder at Archie. “He’s not at fault here. Can you really blame a hero for being a hero?”

“It wasn’t me who destroyed the others.” Archie scrambled to catch up. “I’m no hero! Haven’t you had enough of them pushing us all around?”

Archie ignored the lie. “But we couldn’t have beaten one of them with a single patrol like that. We didn’t have a chance. That was my whole and entire point!”

Archie grabbed Thord by the elbow. Thord ground to a halt with a painful wince and glared down at him. “You coward.” He spat at him, striking him square on the side of his face.

Archie wiped his cheek clean. “We should have gone for help. We could have rallied the entire tribe together to take care of him. Think what that would mean!”

Thord rubbed his chin while he considered this. “Mobilizing the entire tribe to gang up on a single hero?”

“Exactly!” Hope leaped in Archie’s chest. “Think about it! Think about how many Illagers there are compared to the heroes. If we could just gather every Illager we can find and pit them against the heroes, nothing could stop us!”

Matt Forbeck is an award-winning, New York Times bestselling author and game designer with more than thirty novels and countless games published to date, which have won dozens of honors. His recent work includes the new Dungeons & Dragons: Endless Quest books, Halo: Bad Blood, and Life Is Strange: Welcome to Blackwell Academy, plus work on the Rage 2 videogame and the Shotguns & Sorcery roleplaying game based on his novels. He lives in Beloit, Wisconsin, with his wife and five children, including a set of quadruplets. 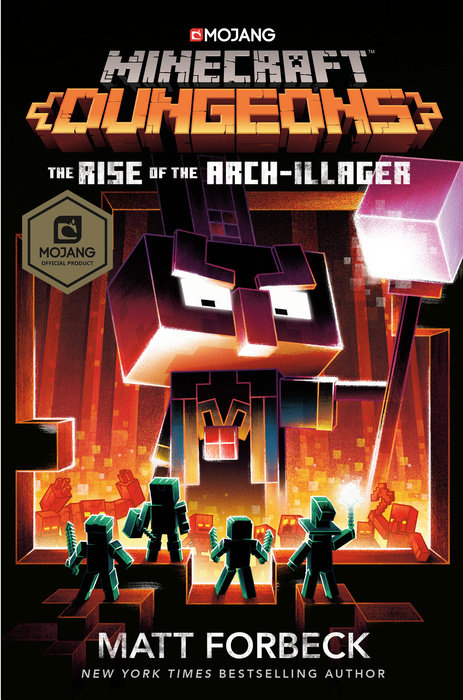