A soulful tour of Palestinian cooking today from the Ottolenghi restaurants’ executive chef and partner—120 recipes shaped by his personal story as well as the history of Palestine.

“Truly, one of the best cookbooks of the year so far.”—Bon Appétit

The story of Palestine’s food is really the story of its people. When the events of 1948 forced residents from all regions of Palestine together into one compressed land, recipes that were once closely guarded family secrets were shared and passed between different groups in an effort to ensure that they were not lost forever.

In Falastin (pronounced “fa-la-steen”), Sami Tamimi retraces the lineage and evolution of his country’s cuisine, born of its agriculturally optimal geography, its distinct culinary traditions, and Palestinian cooks’ ingenuity and resourcefulness. Tamimi covers the territory between the Mediterranean Sea and the Jordan River—East Jerusalem and the West Bank, up north to the Galilee and the coastal cities of Haifa and Akka, inland to Nazareth, and then south to Hebron and the coastal Gaza Strip—recounting his upbringing with eleven siblings and his decision to leave home at seventeen to cook in West Jerusalem, where he met and first worked with Yotam Ottolenghi.

From refugee-camp cooks to the home kitchens of Gaza and the mill of a master tahini maker, Tamimi teases out the vestiges of an ancient culinary tradition as he records the derivations of a dynamic cuisine and people in more than 130 transporting photographs and 120 recipes, including:

Named after the Palestinian newspaper that brought together a diverse people, Falastin is a vision of a cuisine, a culture, and a way of life as experienced by one influential chef.

An excerpt from Falastin

This is a book about Palestine—its food, its produce, its history, its future, its people and their voices. It is a book about the common themes that all these elements share, and how Palestine weaves narrative and cooking into the fabric of its identity. The two go hand in hand. Recipes are like stories: events brought to life and shared in the making and telling. They are passed from one person to the next, and in that movement, some details change, others come to the fore, while others will be left by the wayside. And stories are like recipes: a series of individual experiences blended together to create a whole. Where stories and recipes intersect is the nexus, the point, of this book. Rather than telling “a” story or “the” story of Palestine, then, we’re telling lots of stories. These come in the form of both our recipes and the profiles of some of the people and places we’ve met along the way.

Falastin: the place and people

There is no letter “P” in the Arabic language so “Falastin” is, on the one hand, simply the way “Falastinians” refer to themselves. On the other hand, though—and in the Middle East there is always an “on the other hand”—the word is a big one, going far beyond a straightforward label. It is about geography, history, language, land, identity, and culture. Ask a Palestinian what the word “Falastin” means to them: the answer will rarely be short and will often end with the word “home.”

For us, for the purposes of our book, “Falastin” is about all of these things. Geographically, it refers to a small piece of land at the easternmost corner of the Mediterranean Sea where Palestinians have been living for many centuries. This statement is complicated by the fact that this land is also home to other peoples, Israelis; something of which we are very mindful. Our aim with Falastin is to tread the fine line between paying heed to the situation on one hand and remembering, at the same time, that our book is first and foremost a celebration of the food and people of Palestine.

As well as being a geographical label, “Falastin” is also about identity. For us, it embraces all those who identify as Palestinian, wherever in the world they’re now living. The Palestinian story, post 1948 and with the creation of Israel, could be seen as one of relocation. There are as many different stories as to why a Palestinian is now living where they are living as there are Palestinians. And with more than 12 million Palestinians worldwide, that’s a lot.

There are those who’ve chosen to live abroad and those who have had no choice but to live abroad. There are those who have been displaced closer to home and those who are still living where their parents and grandparents lived before them. Some have known nothing but life in a refugee camp and have never seen the nearby coast, and others have traveled the world freely and have now chosen to return. And then there are those who’ve never actually been to the country itself but who still strongly identify as Palestinian, through the stories and memories passed down from their Palestinian family.

The people of Palestine go by several different names, depending on whom you ask. Some favor “Palestinian,” others prefer “the people of the north,” “Arabs of the Negev,” “Arab refugees,” or “48ers.” “Arab-Israeli,” “Israeli Arab,” and “Palestinian-Israeli” are also used. For us, the words “Falastin” and “Falastinian” are inclusive, managing to incorporate all these various words at the same time as somehow transcending their often loaded meanings.

Falastin is a new kind of Palestinian cookbook: a contemporary collection of more than 110 recipes we hope you’ll cook, eat, love, and make your own. It’s the culmination of Sami’s lifetime obsession with Middle Eastern food and cooking—born and raised in East Jerusalem, relocated to London in his late twenties, and a founding member of Ottolenghi—and Tara’s decade-long obsession with Middle Eastern food and home cooking—raised in London and adopted into the Ottolenghi family.

The recipes come, therefore, from all sorts of places. Some are those Sami grew up with and which will always remind him of home. His father’s easy za’atar eggs, for example, or his mother’s buttermilk fattoush. Others are those most Palestinians grew up on: classics such as chicken musakhan or the upside-down rice cake, maqlubeh. One recipe—that for hummus—remains untouched from when Sami first published it in his second cookbook, Jerusalem. After all, there are some things that can’t be played around with or improved upon.

We haven’t felt bound by a set list of “traditional Palestinian dishes,” though. We’d rather shine a new light on an old classic than re-create it verbatim. Doing this—“playing around”—is a risk, we know, because loyalty to the way a dish is cooked is not, of course, just about the dish. It’s about tradition and identity and being able to own these things through food. The process has not always been easy for Sami. Like a lot of Palestinian chefs working today, he keenly feels this tension—between a sense of loyalty to the way a dish is traditionally cooked and the desire to move it forward so as to keep it fresh and relevant.

If Jerusalem was Sami and Yotam’s joint effort to celebrate the food of their hometown and bring it to a wider audience, then Falastin is Sami and Tara’s focus on the food of Palestine. Speaking in general terms about “Middle Eastern food” is rather like saying “European food,” or “Italian food”: it does not pay heed to all the distinct people, produce, and dishes that distinguish one country from another within a region. It doesn’t allow for the importance of sumac in a dish such as chicken musakhan to shine, for example, or reveal how many Gazan dishes have the trio of dill, garlic, and chile shaping them. It doesn’t tell us anything about the red tahini of Gaza or the white salty cheese of Nablus or Akka. Keeping our focus exclusively on Palestine allows us to explore not only the food of this land and people but the regional differences within.

At the same time that it explores the regions of Palestine, the purpose of Falastin  is to be full of recipes that work for and delight the home cook today. We really want you to cook from the recipes in our book—to find them practical and doable as well as delicious. This means you’ll find fewer recipes for stuffed vegetables in Falastin  than you would in a “traditional” Palestinian cookbook, fewer recipes for celebratory dishes that take half a day to prepare, less call for hard-to-find kishek or jameed, the fermented discs of yogurt and wheat in which to bake a leg of lamb. Loyalty to the Palestinian pantry, though—and a reliance on the ground allspice and cumin, olive oil, pulses, grains, za’atar, sumac, lemons, yogurt, dill, garlic, and green chiles that fill it—is unwavering. Our recipes feel distinctly Palestinian, even when they are presented in a slightly new light. Luckily, for those living outside the Middle East, the Palestinian pantry is also one that can be easily sourced and put together from mainstream stores and websites.

As well as our recipes, another way to get to know the country is through its people. When talking about Palestine in general terms, conversation can quickly become political and difficult. The day-to-day frustrations for a Palestinian trying to go about their business, when heard by those who don’t need to carry an ID card with them or require a permit to travel around their country, are easy not to comprehend. For most Palestinians in the West Bank, the reality of checkpoints, a separation wall, and the complicated systems and differing rules surrounding Areas A, B, and C (see page 130 for more on this) makes, frankly, for a pretty grim picture.

Focus, though—travel around the country meeting and eating with people—and the picture painted is a different one. The link between the land and the produce and the people who grow, farm, and make it is strong. Meet someone who explains how they make their labneh or yogurt from the milk of their own sheep or goat, for example, or smell the fresh za’atar leaves on a small farm holding on a sunny spring afternoon, and the outlook is clearly brighter. How things are seen depends on who is looking and through what lens. For all the differing points of view, the reality of someone’s story—the story they live with day in, day out—cannot be denied. This is why we want to tell the story of Falastin through profiles as well as recipes. These are not our stories. They’re not even always our views. They are, however, stories we’ve been moved to tell from people whom we’ve met.

SAMI TAMIMI was born and raised in Jerusalem and was immersed in food from childhood. He started his career as commis-chef in a Jerusalem hotel and worked his way up, through many restaurants and ethnic traditions, to become head chef of Lilith, one of the top restaurants in Tel Aviv in the 1990's. The company now has four stores and two restaurants, NOPI and ROVI, all in central London. As the executive head chef, Sami is involved in developing and nurturing young kitchen talents and creating new dishes and innovative menus. Alongside Yotam Ottolenghi, Sami Tamimi is co-author of two bestselling cookbooks: Ottolenghi: The Cookbook and Jerusalem: A Cookbook.

TARA WIGLEY spent a decade working in publishing--at the Abner Stein Literary Agency in London and then Simon & Schuster--before going to cookery school in Ireland. She has developed, tested, and writen recipes for Ottolenghi's weekly column in the Guardian magazine and monthly New York Times's columns, as well as for his cookbooks. She is the co-author of Ottolenghi Simple (2018), with Yotam Ottolenghi. For Falastin, Tara has travelled with Tamimi in Palestine and eaten her body weight in chickpeas and tahini. 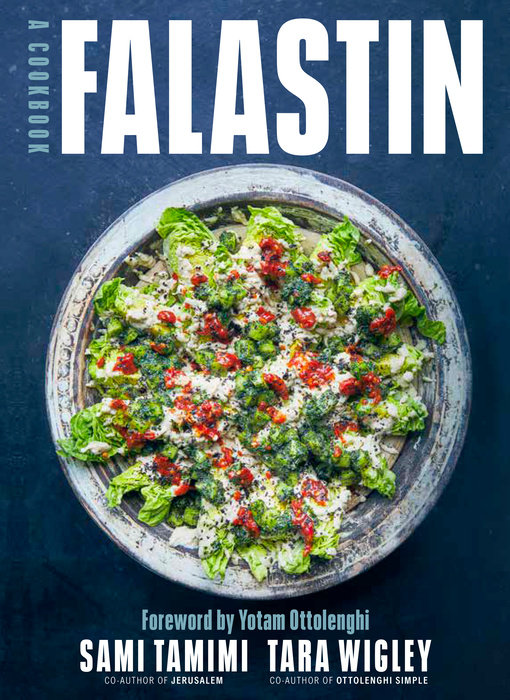