In this epic sci-fi adventure for fans of The Expanse and Battlestar Galactica, five intrepid heroes must unite to save civilization after a long-dormant enemy awakens and strikes a devastating blow

“This jarring, engrossing story of a species-wide fight for survival is recommended for all science fiction readers.”—Publishers Weekly (starred review)

The galaxy was once terrorized by the Sturm, a group of “species purists” intent on destroying any human with genetic or cybernetic enhancements. Fashioning themselves as the one true “Human Republic,” the Sturm cut a bloody swath across the stars, killing billions before finally being defeated and driven into the far reaches of Dark Space. Centuries of peace bred complacency. Everyone believed the Sturm had died out in the Dark. They were wrong.

The enemy has returned and, with a brutal and decisive attack, knocks out almost all of humanity’s defenses. Now on the brink of annihilation, humankind’s only hope is a few brave souls who survived the initial attack: Commander Lucinda Hardy, thrust into uncertain command of the Royal Armadalen Navy’s only surviving warship. Booker3, a soldier of Earth, sentenced to die for treason, whose time on death row is cut short when the Sturm attack his prison compound. Princess Alessia, a young royal of the Montanblanc Corporation, forced to flee when her home planet is overrun and her entire family executed. Sephina L’trel, the leader of an outlaw band who must call on all of her criminal skills to resist the invasion. And, finally, Admiral Frazer McLennan, the infamous hero of the first war with the Sturm hundreds of years ago, who hopes to rout his old foes once and for all—or die trying.

These five flawed, reluctant heroes must band together to prevail against a relentless enemy and near-impossible odds. For if they fail, the future itself is doomed.

An excerpt from The Cruel Stars

The rock turned silently in hard vacuum, and the young woman with it. She pressed her nose to the porthole, which fogged with her breath while she waited for night to sweep over this part of the base. It would come, dark and frozen, within a few minutes, revealing the star field of the local volume, the vast blue-green pearl of the planet far below, and the lights of the nearest Hab, another naval station like this hollowed-out moonlet.

Lucinda waited for the stars. In the right mood, in a rare abstracted moment, she sometimes wondered at the way they wrapped themselves around her, seeming close yet infinitely distant. As she wondered, dusk came pouring over the small mountain range to the east, advancing in a wave of fast shadows and lengthening pools of inky blackness. She could not see the darkness coming for her on this part of the rock, but she imagined it swallowing the local area point defenses and the gaping maw of the docks. The entrance to the port was always illuminated, but the lights soon would burn with a severe brilliance in the accelerated night.

She was not floating, but she felt light and only barely in touch with the deck in the standard one-tenth grav here on the surface as she inspected her reflection in the armor glass.

A young woman frowned back at her. The uniform was not quite right. Tight at the shoulders, a little loose around the waist. The best she could afford. She regarded herself even more critically in the ready-to-wear black and whites. Severely pretty, she had been told by men she did not entirely trust. A little off-putting and perhaps unnecessarily discouraging according to girlfriends she probably could believe.

Nonetheless. It would all have to do.

Surprised out of her reverie, she jumped a little, reaching out reflexively to the nearest wall to arrest herself before she could take gentle flight. She was embarrassed at being caught out.

“Yes,” she said, her voice catching just a little as she turned away from the view, reorienting herself to the spare utilitarian lines of the transit lounge. The glowstrips on the carbon armor walls were old enough to need replacing months ago. Rows of hard o-plastic seating looked bleached and brittle under the weak lighting. She was the only other officer in the space. The only other person for the last hour. This part of the facility was restricted, and foot traffic was thin.

“Sorry for the delay, ma’am,” the young man said, saluting. He was a baby lieutenant, a subbie, just out of the Academy she guessed from his age and eagerness, and his eyes went a little wide as he took in the campaign ribbons on her uncomfortably heavy jacket. He wore dark blue general-duty coveralls and carried a sidearm low on his thigh. Lucinda, in her black and white dress uniform, felt awkward in spite of her advantage in rank and experience. Her black and whites were obviously not tailor-made. She did not have the expense allowance from a family trust that some officers enjoyed.

She returned his salute, painfully aware of the way her dress jacket rode up and the tightness of the sleeves. She tried to ignore the feeling that seemed to steal up on her with every new posting: that she was simply masquerading as an officer and soon would be found out.

He stared at her blankly for a second, amplifying her sense of dislocation and fragile pretense. Then he went, “Ah!” and shook his head.

“I’m sorry. You’re not plugged in to shipnet. Bannon, ma’am. Sublieutenant Ian Bannon. I’m officer of the deck today. I’m sorry you’ve been left up here. It should not have happened.”

The young man looked distressed now, and his discomfort made her feel even more awkward.

“I understand, Lieutenant,” she said. “Everything needs to happen at once just before deployment.”

They shook hands on her initiative. His eyes flitted briefly to the colored rows of decorations again, but she could forgive that. He wore no decoration beyond the stitched half bar on one collar tab.

“Sorry,” he said when he realized she’d caught him checking out the fruit salad, but he smiled as he apologized. He had a boyish grin that Lucinda imagined had been getting him out of trouble his whole life. He looked practiced in its use. “They told me you fought in the Javan War,” he said, catching sight of her duffel bag under the front row of seats and reaching for it before she could. Lucinda almost told him not to. She preferred to look out for herself. But Bannon held the lesser rank, and it would have been a slight to her if he had not offered. He lifted it carefully in the low grav, testing its mass. Nodding when he had the measure of the load.

“I heard you were promoted in the field,” he said, leading her toward the exit. “From ensign to lieutenant. I missed it all. Signed up to fight but didn’t graduate until it was all over.”

Not looking where he was going, he banged his knee into a chair and cussed, then apologized for cussing. The bag floated up slowly like an improbable novelty balloon.

“Whoa there,” he said, adjusting his grip and stance and nearly tumbling over while he wrestled the duffel bag and his own mass back under control.

“Damn.” He grinned. “Been under ship grav too long.”

He shrugged off the moment in which she would have blushed fiercely. Lucinda found she could not help liking him. But also, she could not let him go on.

“Thank you,” she said, nodding at the bag. “But I went into the war as a baby louie, just like you. And I came out a fully grown LT simply because it went on long enough for my turn to come around.”

Bannon, unconvinced, gave her decorations a theatrically dubious side eye as they exited the bare surroundings of the transit lounge.

“Chief Higo told me you were promoted in the field. And the chief is never wrong. He told me that, too.”

She essayed a small, uncertain smile.

“I would never want to correct a chief petty officer,” she said—and she was not lying—“but my first promotion, from ensign, that wasn’t in the war. It was nothing, really. Just a small engagement on a counterpiracy patrol.”

“Okay.” He grinned as though he knew she was hiding some greater truth. “If you say so.”

They walked down a long, wide corridor. The passageway curved into the body of the rock and twisted like an elongated strand of DNA. She could feel their descent in the deck’s slope under her feet and the increasing pull of spin grav. There were no more portholes to the surface, only screens carrying g-data feeds and imagery from around the base. At first they passed no other personnel, but the traffic in automats and bot trains was moderate to busy, and once a Flotilla-class Combat Intellect floated past. They saluted the black ovoid lozenge. It pulsed in acknowledgment, turning briefly purple, before a female voice said, “Lieutenant Hardy, Lieutenant Bannon, good day to you both.”

The Intellect drifted on serenely.

They watched it disappear around the twisting curvilinear passage.

“Those guys,” said Bannon, shaking his head. “So chill.”

The corridor spiraled down for another five minutes. Lucinda’s duffel bag grew visibly heavy in her colleague’s hand. She did not so much make conversation as ride it downslope. Bannon, unlike her, wasn’t shy about talking about himself. By the time they stood in a secure reception bay, enjoying the one Earth-standard grav provided by the spin and the base’s mass generator, she knew all about Bannon’s family (wealthy but not ennobled), his service (just beginning), and the ship’s command group (pretty chill except for . . .).

“Except for this guy,” he muttered out the corner of his mouth.

John Birmingham is the author of Emergence, Resistance, Ascendance, After America, Without Warning, Final Impact, Designated Targets, Weapons of Choice, and other novels, as well as Leviathan, which won the National Award for Nonfiction at Australia’s Adelaide Festival of the Arts, and the novella Stalin’s Hammer: Rome. He has written for The Sydney Morning Herald, Rolling Stone, Penthouse, Playboy, and numerous other magazines. He lives at the beach with his wife, daughter, son, and two cats. 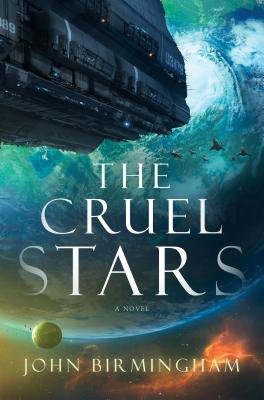