NEW YORK TIMES BESTSELLER • Ali Wong’s heartfelt and hilarious letters to her daughters (the two she put to work while they were still in utero) cover everything they need to know in life, like the unpleasant details of dating, how to be a working mom in a male-dominated profession, and how she trapped their dad.

In her hit Netflix comedy special Baby Cobra, an eight-month pregnant Ali Wong resonated so strongly that she even became a popular Halloween costume. Wong told the world her remarkably unfiltered thoughts on marriage, sex, Asian culture, working women, and why you never see new mom comics on stage but you sure see plenty of new dads.

The sharp insights and humor are even more personal in this completely original collection. She shares the wisdom she’s learned from a life in comedy and reveals stories from her life off stage, including the brutal single life in New York (i.e. the inevitable confrontation with erectile dysfunction), reconnecting with her roots (and drinking snake blood) in Vietnam, tales of being a wild child growing up in San Francisco, and parenting war stories. Though addressed to her daughters, Ali Wong’s letters are absurdly funny, surprisingly moving, and enlightening (and gross) for all.

“[Wong] spins a volume whose pages simultaneously shock and satisfy. . . . Dear Girls is not so much a real-talk handbook as it is a myth-puncturing manifesto.”—Vogue

“[A] refreshing, hilarious, and honest account of making a career in a male-dominated field, dating, being a mom, growing up, and so much more…Yes, this book is addressed to Wong’s daughters, but every reader will find nuggets of wisdom and inspiration and, most important, something to laugh at.”—Bustle

An excerpt from Dear Girls

How I Trapped Your Father

Your dad is the (if we are divorced by the time you read this, please skip to the next sentence) best, but I didn’t just find him overnight. In the fall of 2009, I had been living in NYC for a year and had been unlucky when it came to love and casual sex.

Well, let’s just get right to it: I dated a series of men who had issues getting it up. It felt like a curse. Five guys in a row lost their boners in the middle of getting busy. Part of me blamed the Raynaud’s disease, a condition that was passed on to me by my father. I have extremely poor circulation to my hands and feet, to the point where in the cold, they will turn blue and feel like pain icicles. So, especially in the New York fall or wintertime, my bare hands, much like the hands of Rogue from the X-Men, could suck the life out of a man’s erect penis.

After the first two guys that I hooked up with in NYC went soft on me, I grew extremely self-conscious of my White Walker fingers. By the third time I started making out with a new guy, I made sure to simultaneously warm my hands up by furiously rubbing them together and breathing into them like a homeless character in a theater production, next to a papier mâché trash-can fire.

He was extremely stupid. I know I’ve confessed that I’m no genius, but this guy had a lower back tattoo of Chinese characters, didn’t know who Abraham Lincoln was (this is for real), and couldn’t stop talking about how The Crow was the greatest movie ever made (it’s good, however Clueless is a masterpiece). But I hadn’t gotten successfully laid in so long and was very eager to flex my new technique, so I made my way to Trash Island.

I’d thought the whole point of living far away in an outer borough was to afford yourself a nicer apartment with more space. This dude did have a queen-sized, four-poster bed, but . . . ​not in a good way. It was old and dusty and made me feel less like Elizabeth Bennet in Pride and Prejudice, and more like that weird sick kid in The Secret Garden who sleeps in a tunic and is allergic to the sun. He passionately threw me onto the bed, but a sudden, deafening bed creak rendered the mood DOA. I would’ve believed him if he’d told me that a hundred people over the past two centuries had spent their final days dying of scurvy in this rickety, termite-infested bed. His place was a shithole. But traveling to Coney Island is the New York subway ride equivalent of hiking Machu Picchu, and I’d reached the summit so I couldn’t back down now.

On the train, boat, and all the way up until I grabbed his penis, I had been consistently rubbing my hands together to keep the blood flowing. And he stayed hard. My method was sound! We were ready to move to the next level and I was finally going to pork a man I met at a bar like those bitches did in Sex and the City. But as soon as he made first contact with my vagina—which Raynaud’s does not affect—his boner melted into a wet Cheeto.

A total and oppressive silence filled the room. He didn’t even apologize, offer to eat me out, or make me a sandwich, which I felt was quite rude. I wanted to go home, but I was too poor to take a cab back and it was way too late and unsafe to take the train by myself all the way back to SoHo. So I slept in this stranger’s haunted Victorian bed for the rest of the night and left before I could learn his last name or get attacked by a ghost in a frilled puffy dress.

Sex and the City had promised me much more exciting casual sex in New York City. Before moving there, I was looking forward to spending the night in an art gallery curator’s loft. Maybe his name was Demetri and he would make me post-coital French press coffee and poached eggs before I had to catch a taxi, in the same Vivienne Westwood dress and Manolo Blahnik heels from the night before, to my very important advertising job. Maybe Demetri was GREAT at eating ass and I would learn later at brunch with my sassy girlfriends that Demetri had, in fact, a reputation for being great at eating ass. Maybe he was known amongst power New York women as “the mASSter.” Maybe eventually the relationship would peter out because he was too good at eating ass and my ass would get raw and I would get sick of this one-trick pony. I would try to do missionary with him and then he’d just turn me over, move his head down my butt, and then I’d think, All this f***ing dude does is eat ass. And from that experience I would create the perfect slogan for the new “Yelp for Single Men” campaign and my advertising agency would make me executive girl boss president person!

Except I never got to sleep with anyone who earned more than fifteen dollars per hour during that first year in NYC. I’d consider myself a princess if any of the men owned a bed frame (even if it was full of bedbugs in powdered wigs). They never took me out on a date and all of them had roommates. That’s what happens when you spontaneously go home with a fellow struggling stand-up comic or, even worse, an improviser. (Please always say “f*** no” to those “yes and” motherf***ers.) At the time, I didn’t require or need to be taken out to dinner. But after five consecutive pudding penises, I began to want to get to know a man a little more before taking a chance on his performance abilities. There was a lot on the line: I would have taken a sixth soft dick as a sign to give up my worldly possessions, shave my head, and make Buddha my husband.

What I really wanted was a boyfriend. The single life in New York was not just disappointing, it was lonely. Of course there’s a ton of cool stuff to do there, but I got sick of seeing the latest MoMA exhibit by myself, eating delicious thin crust pizza by myself, and watching a homeless man argue with pigeons by myself.

On my first birthday in New York, I did three five-minute, unpaid sets. One in Bushwick, one on the Upper West Side, and the last in the Lower East Side. I told nobody it was my birthday. I didn’t want people to feel bad for me, and I didn’t want to acknowledge, even to myself, that this was what I was actually doing on my birthday, because I would have cried. I had already spent two of my post-college years backpacking through Asia solo, so I felt like I’d earned my Cheryl Strayed self-reflection-journey points and was ready for meaningful, caring companionship. I also craved a steady sexual partner, who knew all of my spots and gained a dedicated arsenal of no-fail moves, like pouring Fun Dip into my pussy and then going to town with that little sugar spoon, or sticking a wet thumb up my ass when I announce that I’m gonna cum, which, in my experience, works wonders on men as well. It’s a bi-effective move that’s rock-solid. Is “bi-effective” a word? Please look it up and let me know, I refuse to google anything for these letters.

In the fall of 2009, my old high school friend Abby Goldberg invited me to her wedding. At the time, I was twenty-seven years old and she was my very first friend to get married. Her grandfather co-ran a major felt company. Yes, that’s what we mean when we say white people are beginning from a different starting line than everyone else. No matter how hard you study or work, you cannot compete with someone when their grandparents manufactured motherf***ing felt, a material so iconic that even you two girls could recognize it by the age of one. Your Mickey Mouse ears wouldn’t exist without Abby’s family. It had never occurred to me that someone even could invent felt; I must have subconsciously decided that, like a pen or a paper clip, it just occurs naturally.

The two-hundred-fifty-plus-guest Jewish wedding at a Napa vineyard was the most lavish matrimony I had ever been to. Most of the weddings I have attended since have a three-hour time limit on the free alcohol. The bat signal goes out to the guests that the open bar is about to close, and people savagely race to the bar, like those shitty-ass buffalos who trampled all over Mufasa in The Lion King, to get their last glass of complimentary booze to hold them over for the rest of the evening. This wedding had an open bar starting before the ceremony, well after the dinner, and the cocktails had all sorts of delicious, fresh-squeezed peach juices and tasted like decorative pillows from Anthropologie. The guests consisted mostly of Jewish people. So right away, I took notice of the only other Asian person at the wedding: your father.

Ali Wong is a stand-up comedian, writer, and actress.  She has released two hit Netflix comedy specials—Baby Cobra and Hard Knock Wife—and will star in the Netflix original film Always Be My Maybe.  She lives in Los Angeles with her husband and two daughters. 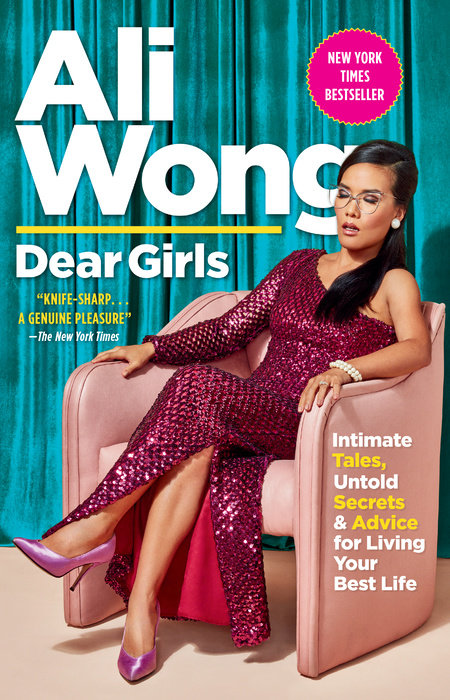