My Recipes by Way of France: A Cookbook

“Melissa Clark’s contemporary eye is just what the chef ordered. Her recipes are traditional yet fresh, her writing is informative yet playful, and the whole package is achingly chic.”—Yotam Ottolenghi

Just as Julia Child brought French cooking to twentieth-century America, so now Melissa Clark brings French cooking into the twenty-first century. She first fell in love with France and French food as a child; her parents spent their August vacations traversing the country in search of the best meals with Melissa and her sister in tow. Near to her heart, France is where Melissa's family learned to cook and eat. And as her own culinary identity blossomed, so too did her understanding of why French food is beloved by Americans.

Now, as one of the nation's favorite cookbook authors and food writers, Melissa updates classic French techniques and dishes to reflect how we cook, shop, and eat today. With recipes such as Salade Nicoise with Haricot Vert, Cornmeal and Harissa Soufflé, Scalloped Potato Gratin, Lamb Shank Cassoulet, Ratatouille Sheet-Pan Chicken, Campari Olive Oil Cake, and Apricot Tarte Tatin (to name a few), Dinner in French will quickly become a go-to resource and endure as an indispensable classic.

An excerpt from Dinner in French

I can’t really speak French, but I cook in French. For years, I studied conjugations and the passé simple, practiced pronouncing yaourt and grenouille, but try as I might I just couldn’t seem to master it beyond the essentials like “deux pains au chocolat, s’il vous plaît.”

In the kitchen, however, I am fluent. The fistfuls of garlic and thyme, the pebbly feel of grey sel marin de Guérande between my fingers, and the lushness of an emulsifying sauce are now so ingrained, I can cook in French without thinking. The ethereal creaminess of a soufflé, the anchovy funk of a pissalardière, the caramelized depth of boeuf Bourguignon are as deeply part of me as the bagels and lox we ate in Brooklyn every Sunday.

That merging of classic French cuisine and the food I grew up eating in Brooklyn is the foundation of how I approach cooking—and the raison d’étre of this book. To me, the cuisines are not two distinct things, but seamlessly intertwined into a glorious whole, because I learned about them at the same time. Yes, we waited in line for Di Fara’s pizza, Lundy’s clams, and chicken feet and tripe at our favorite dim sum palace. And we also spent countless weekends fussing over Julia Child’s terrines and Jacques Pépin’s coq au vin, which my mother might slather on leftover challah, and my dad might spike with soy sauce (sorry, Jacques). It wasn’t irreverence so much as an intense culinary curiosity, a playful exploration of the delicious. All of these influences are so essential to the way I think about food that they’re the touchstones of every recipe I create. I might start by asking myself, would adding chicken schmaltz to ratatouille be a good thing? The full answer is on page 176. The short answer is: Yes!

None of this would have happened if my Great-Aunt Martha and Uncle Jack hadn’t dragged my parents on their first trip to Europe—seven countries in twenty-five days—after medical school in 1960. My dad, whose ideal vacation up until then was fishing in the Catskills, didn’t  want to go. But they went and fell hard for France, getting hooked on escargot, extra crispy frites, and the high culture of Monet-filled museums and Gothic cathedrals, all so astoundingly ancient and different from the Yeshiva-centric Brooklyn they grew up in. My parents went back every year, first by themselves, then with my sister and me in tow.

The planning began in January. At first my parents rented houses. But at some point they started house exchanging to economize. Less money spent on lodging meant more on the Michelin-starred meals my parents mapped into their own stellar universe. The year began with the arrival of a thick catalog in the mail: HomeAway, bursting with options. We swapped our old wood-framed Victorian in Flatbush for stone-walled farmhouses in Burgundy, cabins in the Dordogne, stucco split-levels near Nîmes. It was the 1980s, and it was still the custom for a psychiatrist to take off the entire month of August.

This was back before the internet, back before cell phones, even before fax machines. My parents typed letters on blue onionskin paper, then sent them via airmail. There was no way to look up references and no background checks from the HomeAway company. We packed our valuables into a locked closet, printed out instructions for the care of the cats, and caught a cheap charter flight to Paris, hoping for the best. It always worked out, though some years better than others. There were the lifelong friends we made with the people whose homes we exchanged for ours, like the Lamontagnes, gourmets to the core, whose pantry filled with jars of homemade quince jam and pork rillettes was rival to our own.

On the other end of the spectrum were the shady characters who used our Brooklyn house and Volkswagen Rabbit while we got their marbleclad apartment in Nice, their white Mercedes convertible, and their National Front pamphlets next to a loaded gun in their bedside table. We came home to find the odometer of the car disconnected, the wineglasses broken, and the cat gone. We never did figure out what happened, but always wondered if the mezuzahs on our doors sparked the sabotage.

Meanwhile, behind all the closed doors of our house exchanges, my mother, an incorrigible snoop, opened high cupboards and poked around closets, hoping for menorahs, seder plates, yarmulkes—looking for a clue, any indication of kindred spirits. Sometimes a bookshelf revealed a volume of translated Philip Roth or Saul Bellow, which led to speculation and a little spark.

Our true connection to the French was through our mutual obsession with the food—learning about it, exploring it, and preparing lavish feasts with it. When we weren’t cooking, we were planning the next meal, chasing the daily markets from small town to even smaller town, reveling in the figs, the sausages, the incredible cheeses we couldn’t get at home.

We also went to fancy restaurants. It was my dad’s quest to eat in every Michelin-starred restaurant in France, and he came pretty close, despite getting lost along the way. Pre-GPS, losing our way on tiny country roads was just a normal part of the journey to a meal. When my kindergarten teacher asked me what I did with my parents every August in France, I said, “First we get lost, then we have lunch.”

That cute reply was the original title for this book. But as I cooked and wrote down my recipes, I realized that I wasn’t lost anymore. I knew where I was going with every recipe. They’re quirky and personal, streamlined and practical, seasoned with a dose of Brooklyn moxie to augment all that buttery haute cuisine. Yes, there are times I might meander down a seemingly dead end of harissa gougères only to end up with a buoyant soufflé (page 34). I always find my way because, really, I’m not going very far. It’s all right there, rooted in my New York–Jewish–Francophile DNA. And my cooking ends up playfully and unmistakably French. At our house, the conversation might be in English, but dinner’s in French.

MELISSA CLARK is a staff writer for the New York Times where she writes the popular column "A Good Appetite," and stars in a weekly complementary video series. The winner of James Beard and IACP Awards, she is a regular on Today and NPR (The Splendid Table, The Leonard Lopate Show). Melissa earned an MFA in writing from Columbia.

My Recipes by Way of France: A Cookbook 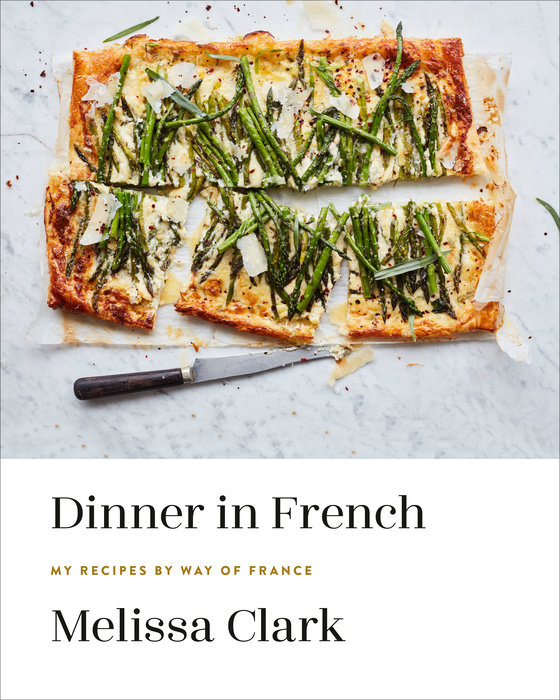