Reimagine Italian-American cooking, with more than 125 recipes rich with flavor and nostalgia from the celebrated husband-and-wife chef team of Michelin-starred Don Angie in New York City.

ONE OF THE BEST COOKBOOKS OF THE YEAR: New York Post, Minneapolis Star Tribune, Food52, Epicurious, Taste of Home • “Every bit of warmth and hospitality that you feel when you walk into Don Angie pours out of every page of this magical book.”—Michael Symon

The words “red sauce” alone conjure images of an Italian-American table full of antipasti, both hot and cold, whisked off to make room for decadent baked pastas topped with molten cheese, all before a procession of chicken parm or pork chops all pizzaiola—and we haven’t even gotten to dessert. It’s old-school cooking beloved by many and imbued with a deep sense of family.

In Italian American, Angie Rito and Scott Tacinelli, the chefs of critically acclaimed Don Angie in New York City’s West Village, reinvigorate the genre with a modern point of view that proudly straddles the line between Italian and American. They present family classics passed down through generations side-by-side with creative spins and riffs inspired by influences both old and new. These comforting dishes feel familiar but are far from expected, including their signature pinwheel lasagna, ribs glazed with orange and Campari, saucy shrimp parm meatballs, and a cheesy, bubbling gratin of broccoli rabe and sharp provolone.

Full of family history and recipes that will inspire a new generation, Italian American provides an essential, spirited introduction to an unforgettable way of cooking.

An excerpt from Italian American


This book is about family.

Italian-American cooking always is, when you get down to it. We’re both the grandchildren and great-grand-children of immigrants from Southern Italy, and while our families worked, celebrated, squabbled, and reminisced, the one constant was food. A lot of food. Italian-American cooking is about family, and the spirit of generosity, manifesting in an abundance of good things to eat at all times.

We grew up eating the kind of food that East Coasters refer to as “red sauce”—a vast genre aptly named for the rich, red tomato sauce that usually appears as the centerpiece of every meal. But whether you call it “red sauce” or simply “Italian-American,” both terms refer to a distinct style of cooking that’s separate from traditional Italian cuisine.

Italian-American food has become a genre in its own right, marked by popular dishes like spaghetti and meatballs, multitiered chicken and eggplant parms, and hearty baked pastas laden with molten cheese. It’s a cuisine that took on a life of its own as Italian immigrants adapted to living in a new country and made do with what was available, resulting in a whole new style of cooking that can’t be found in the motherland.

Today, many American chefs attempt to “modernize” or refine Italian cuisine, which often means focusing on Northern Italian fare, marked by rich risottos, silky fresh pastas, and wine-braised meats. But Italian-American food is something else entirely. It’s a cuisine developed from the foods of the Italian south, where most Italian immigrants to the US, including those in our family, came from. This is the land of extruded dried pastas, tomato sauce, and olive oil in copious amounts. This is where unassuming trattorias run by time-tested nonnas turn out some of the most soulful, delicious, and comforting meals we’ve ever had, and where the recipes our families have handed down through generations come from.

Italian-American food hasn’t always gotten the respect it deserves in highfalutin culinary circles, but it’s become something of an obsession for us, to redefine what the term means and to bring it to as many people as possible. At our restaurant Don Angie in New York City, we strive to both honor and breathe new life into the cuisine, resulting in dishes that proudly straddle the line between Italian and American, in all of their multicultural glory.

New York is where so many of our ancestors first set foot in this country, building the foundation for the city’s now-legendary Little Italy (although most Italians have long since moved away). There are classic red-sauce joints aplenty in this town, with names like Ferdinando’s and Bamonte’s and Don Peppe’s, and we love them all. We regularly seek out the oldest of the old-school spots, ideally ones with bad lighting, chintzy décor, and a heavy dose of nostalgia. Places like these just feel like home to us, and we can’t get enough of them.

But as much as it’s true that New York is a city steeped in tradition, it’s also a city pulsating with the vibrant mix of a thousand different cultures and cuisines all at once. And though red sauce is the food of our people, we’ve been lucky to expand our worldview through countless hours spent cooking and eating our way across the greatest melting pot in the world.

For years, we lived in a tiny apartment above a Chinese restaurant on the Lower East Side, where we first tasted the chrysanthemum greens we’d later use in our version of a Caesar salad. We’ve taken countless trips to Kalustyan’s, a legendary international spice shop in an Indian neighborhood known as “Curry Hill,” familiarizing ourselves with new-to-us ingredients like Urfa biber, Tasmanian pepperberries, and Persian black lime. Working our way across the city’s kitchens, we befriended coworkers from all over the globe who introduced us to their own food traditions. Our coworker Regulo brought in his wife’s delicious Dominican quipe (beef and bulgur) every week for family meal; our barista Syed invited us to his apartment in Queens for a homemade Bengali feast; a talented cook named Kanya taught Angie how to make herb-scented coconut milk for delicate Thai desserts. Through these friends and colleagues, we fell in love with flavors and ingredients from outside of our Italian-American heritage, and those elements naturally began to find their place in our own kitchen.

We have now developed our own highly personalized version of Italian-American cooking, one that’s rooted in Southern Italy but enmeshed with flavors and techniques from all over the world. Our grandmothers might not use tamarind paste, guajillo chiles, or Japanese eggplants in their kitchens, but they’re certainly familiar with the rhythms of adapting your recipes to fit your surroundings. Immigrants have been cooking this way for generations; we’re just putting our own spin on the idea.

Italian-American dishes are the root of our cooking, but they’re just the starting point. In the end, it’s all about cooking with heart. Every move we make as professional chefs is done with the same spirit of generosity we grew up with. For us, it’s solely about taking care of people, the way our families always have. It’s about finding deep comfort in simple ingredients, and about expanding the boundaries of what you typically bring into your own kitchen. And now, by cooking your way through this book, whether you were born Italian American or not, you become a part of that tradition, too.

Welcome to the family. 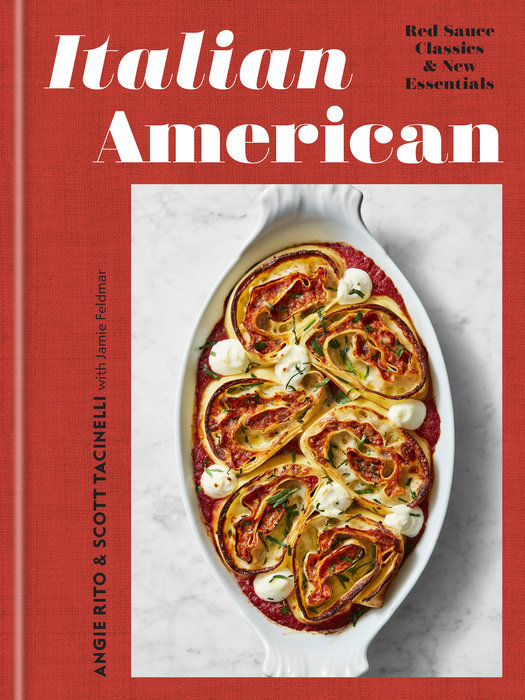