The Iconic Cocktails, Apéritifs, and Café Traditions of France, with 160 Recipes

Bestselling cookbook author, memoirist, and popular blogger David Lebovitz delves into the drinking culture of France in Drinking French. This beautifully photographed collection features 160 recipes for everything from coffee, hot chocolate, and tea to Kir and regional apéritifs, classic and modern cocktails from the hottest Paris bars, and creative infusions using fresh fruit and French liqueurs. And because the French can't imagine drinking without having something to eat alongside, David includes crispy, salty snacks to serve with your concoctions. Each recipe is accompanied by David's witty and informative stories about the ins and outs of life in France, as well as photographs taken on location in Paris and beyond.

Whether you have a trip to France booked and want to know what and where to drink, or just want to infuse your next get-together with a little French flair, this rich and revealing guide will make you the toast of the town.

An excerpt from Drinking French

On the darkened streets and sidewalks of France, the flicker of lights in corner cafés signals the start of the day. Whether you’re in a city like Paris, Lyon, or Marseille, or a village in the countryside, once the lights are on, the next order of business is to flip the switch on the coffee machine. With that simple action, the day begins.

While the machine is warming up, the beige ceiling lights cast a warm glow on wicker chairs stacked one on top of the other, along with the café tables, waiting to be set up on the sidewalk outside. Baguettes picked up at the local bakery on the way to work are propped up against the bar in a paper sack, and will eventually be sliced for breakfast tartines, served with butter and jam. But first things first: coffee.

Le barman (or woman) releases a sputtering blast of steam from the milk-warming wand, an indication that the machine is ready to go, as people start to wander in. In the wintertime, the warmth is definitely part of the attraction, as are the free morning newspapers on wooden spindles. But any time of the year, locals gather at their neighborhood bar to stand and drink a short, dark café express while reading the paper or catching up on commérages (gossip) in the neighborhood. Most of the customers have just woken up. Others are heading home after a long night of work—or play. But it doesn’t matter: There are no judgments in a French café; everyone is welcome to gather there, whether you spent the night sweeping the streets (or working the streets), are on your way to a business meeting, or are a timid tourist, hoping to get your first taste of France.

I fell into the latter category. On my first visit to Paris, zonked after the long flight from California, I walked into a nearby café and ordered a coffee at the counter. After the barman strong-armed the filter holder into place, he hit the switch and the espresso machine dribbled a trickle of murky dark liquid into a cup placed underneath the spout. When the flow of coffee stopped, he slid the cup and saucer toward me. I dutifully picked up my coffee, walked over to a table, and sat down to drink it. Within seconds the barman barked something at me that I didn’t understand (with my nonexistent comprehension of French, and French café customs), but eventually I deduced that I’d made a grave error by taking my coffee from the bar to a table, where the price of a cup doubles. I slunk back to the bar, embarrassed by my gaffe, finished my coffee, and left. That was my first lesson in how to drink, and behave, in a French café.

There seems to be a code of conduct for everything in France, from the salle d’attente of the doctor’s office, where you’re expected to greet each and every person in the waiting room when you walk in, to not calling a café waiter garçon (boy), which is a mild insult. One should say monsieur, because everyone is égal in France, and service here is about serving you, not being at your service. (You can thank the French Revolution for this mind-set, or blame it, if you’ve ever had a less-than-optimal customer service experience in the country.)

Later that afternoon, refreshed from a nap, I decided to go for a walk and take in the city. I had finally made it to Paris, the place I’d always dreamed of visiting, and didn’t want to spend my first day snoozing on the so-small-my-feet-were-hanging-over-the-edge bed in my hotel room. (Were French people really that tiny?) After meandering around for a while, stopping to admire the window of each and every chocolate and pastry shop I passed (there were so many of them—it was paradise!), I decided to try my luck again at a café. Being a sunny afternoon, I chose one where people were sitting at tables outside. And this time, I knew enough not to get my coffee at the bar first, and bring it to the table.

Still reluctant with my faltering French, I wove myself between the closely packed tables to squeeze into the only available seat I had spotted on the terrace. I did my best not to bump into or jostle anyone (after all I’d heard about Parisians before my visit, I was afraid to incur any wrath). I did, however, know how to say pardon. When I grazed someone and uttered a nervous “Uh, pardon,” no one looked at me or paid any attention. They kept on chatting with friends, reading their newspapers, or staring off into the distance, looking at nothing in particular with a cigarette smoldering in the ashtray.

Once seated, my anxiety climbed when I saw there was no menu or list of drinks on the table. Nothing I could point to and say, “I’ll have that.” I had no choice but to ask for my drink in French. Café was one French word that I found easy to master, but there’s only so much coffee you can drink in a day, and I was ready for something more relaxing. Fortunately, I spotted a blackboard on the wall that listed wines available either by the verre or by the pot, at prices that seemed too good to be true (three dollars for a glass of wine?!), and it seemed only right that I order one. I didn’t think I could drink a whole pot of wine by myself—and later learned that a pot is a refillable bottle with an extra-thick bottom so it doesn’t tip over—but I wouldn’t have a problem with une verre. Or was that un verre? My worries were mounting. I finalized the order in my mind, with a little help from my guidebook, and memorized the phrase in advance: “Je voudrais un verre du vin rouge, s’il vous plaît," so I’d be ready.

When the waiter finally came to take my order, I was suddenly on the spot and completely blanked on my plan of action. Flustered, I stammered and stuck with my usual “ . . . uh . . . um . . . un café," barely remembering to add a “monsieur” to the end of my less-carefully crafted phrase. A minute later he placed the little cup of coffee in front of me with two paper tubes of sugar resting on the saucer, as well as a separate burgundy-colored plastic dish with a built-in clip on it, holding l’addition (the check). I was no stranger to strong coffee, but after my first few cups in France, I understood why everyone added all that sugar. I ripped off the end of one of the sugar tubes and dumped it in. Then I added the second, and sat back to watch the world go by.

I often refer to cafés as the living rooms of Paris. Historically, artists and writers used their local café as a place to work, attracted by the heat they didn’t have at home in the winter. They also benefited from the alcohol being served, which most writers deem a necessity after laboring over words all day. (Hence, entire chapters devoted to apéritifs, infusions, and cocktails in this book.) Cafés are also places to meet friends, especially in cities, since many people live in apartments that are too small to host guests, or they don’t want to go through the bother of tidying up. (With clothes dryers not very common in France, there are invariably a few unmentionables hanging in your apartment to dry, that you don’t necessarily want everyone else to see.) Also, who wants to stay at home when you can sit on an open-air terrace and have whatever kind of drink you want, served by a dashing Frenchman? Not me.

I’ve come to love the café culture in France, and the drinks and customs that are part of the rhythm of daily life. The wines, beers, coffees, infusions, apéritifs, liqueurs, distillations, cocktails, and digestives also tell the story of France. If you want to understand the French, watch how they eat, and see what they drink. After being in France for almost two decades, I’m no longer wary of cafés. And, like the French, I can be found in a café at all hours of the day, to meet friends, to write, or to conduct a little business (but nothing too serious). Once you’re seated at a table, it’s yours until you’re ready to leave. I used to wonder how people could sit in one place and do nothing for hours, as the French do. But after just a few years of living in France, I learned how to just be, too.

You can re-create the feeling and flavors of a French café at home, no matter where you live. I can’t prove this, but to me, French drinks taste better in traditional coffee cups and cocktail glasses. Over the years, I’ve amassed quite a collection of tableware and glasses by scouring flea markets and thrift stores. Most of my café au lait bowls and vintage glasses had stood up to decades of use before I got them, and I plan to use them for many more years to  come.

DAVID LEBOVITZ has been a professional cook and baker for most of his life; he spent nearly thirteen years at Chez Panisse until he left the restaurant business in 1999 to write books. He moved to Paris in 2004 and turned davidlebovitz.com into a phenomenally popular blog. He is the author of six books, including The Perfect Scoop, Ready for Dessert, The Great Book of Chocolate, and a memoir called The Sweet Life in Paris, and he was named one of the Top Five Pastry Chefs in the Bay Area by the San Francisco Chronicle. David has also been featured in Bon Appétit, Food & Wine, Cook’s Illustrated, the Los Angeles Times, the New York Times, Saveur, Travel + Leisure, and more.

The Iconic Cocktails, Apéritifs, and Café Traditions of France, with 160 Recipes 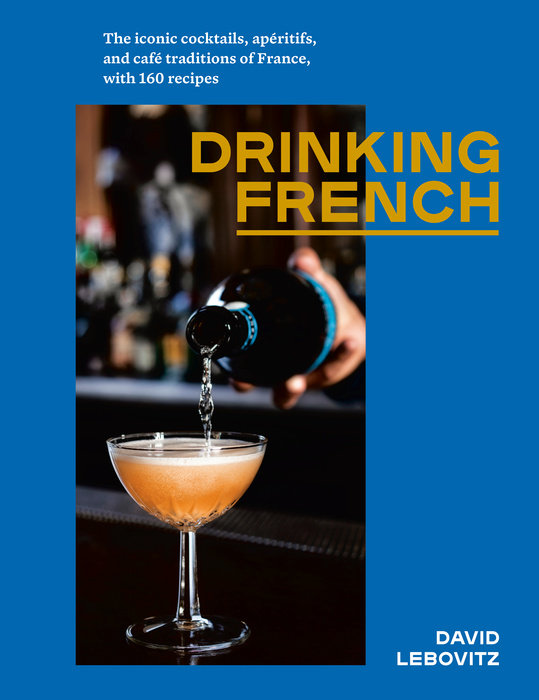