"Zuleika Dobson is a highly accomplished and superbly written book whose spirit is farcical," said E. M. Forster. "It is a great work--the most consistent achievement of fantasy in our time . . . so funny and charming, so iridescent yet so profound."
Originally published in 1911, Max Beerbohm's sparklingly wicked satire concerns the unlikely events that occur when a femme fatale briefly enters the supremely privileged, all-male domain of Judas Col-
lege, Oxford. A conjurer by profession, Zuleika Dobson can only love a man who is impervious to her considerable charms: a circumstance that proves fatal, as any number of love-smitten suitors are driven to suicide by the damsel's rejection. Laced with memorable one-liners ("Death cancels all engagements," utters the first casualty) and inspired throughout by Beerbohm's rococo imagination, this lyrical evocation of Edwardian undergraduate life at Oxford has, according to Forster, "a beauty unattainable by serious literature."
"I read Zuleika Dobson with pleasure," recalled Bertrand Russell. "It represents the Oxford that the two World Wars have destroyed with a charm that is not likely to be reproduced anywhere in the world for the next thousand years."

Henry Maximilian Beerbohm, the essayist, caricaturist, critic, and short story writer who endures as one of Edwardian England's leading satirists, was born in London on August 24, 1872, into a large and prosperous family of Baltic German descent. Among his many diversely talented siblings were the author and explorer Julius Beerbohm, and his half brother the flamboyant actor and theatrical manager Herbert Beerbohm Tree. A sophisticated child who read Punch magazine and celebrated his tenth birthday with a glass of champagne, Max Beerbohm exhibited an adroit wit from an early age. While a student at Charterhouse school in Surrey, he amused masters and classmates with irreverent caricatures and prose parodies. Beerbohm entered Merton College, Oxford, at the age of eighteen and quickly gained a reputation as an aesthete and dandy. 'I was a modest, good-humored boy,' he recalled. 'It was Oxford that has made me insufferable.' Beerbohm's renown soon extended to London, where he was swept into Oscar Wilde's literary circle. In 1894 he contributed the satiric essay 'A Defense of Cosmetics' to the first issue of the Yellow Book, the controversial quarterly associated with the English decadents of the 1890s.

Beerbohm won a large audience with the publication of The Works of Max Beerbohm (1896), his first volume of essays. The ultimate statement of his Yellow Book period, it includes a famous meditation on dandyism, along with a wry reminiscence of Oxford. Thereafter Beerbohm devoted himself to writing charming pieces about whatever topic struck his fancy. The essays collected in More (1899), Yet Again (1909), And Even Now (1920), and Variety of Things (1928) reflect his lifelong belief that good sense about trivialities is preferable to nonsense about important matters. 'What Mr. Beerbohm gave [to the essay] was, of course, himself,' noted Virginia Woolf in pinpointing his talent. 'He was affected by private joys and sorrows, and had no gospel to preach and no learning to impart. He was himself, simply and directly, and himself he has remained. Once again we have an essayist capable of using the essayist's most proper but most dangerous and delicate tool. He has brought personality into literature, not unconsciously and impurely, but so consciously and purely that we do not know whether there is any relation between Max the essayist and Mr. Beerbohm the man. We only know that the spirit of personality permeates every word that he writes. . . . He is without doubt the prince of his profession.'

Beerbohm was also famous for his comic sketches of literary figures, politicians, and celebrities. Impudently he lampooned everyone from Oscar Wilde and Henry James to Queen Victoria and the Prince of Wales. Explaining his recipe for caricature, Beerbohm stated: 'The whole man must be melted down in a crucible and then, from the solution, fashioned anew. Nothing will be lost but no particle will be as it was before.' He concluded: 'The most perfect caricature is that which, on a small surface, with the simplest means, most accurately exaggerates, to the highest point, the peculiarities of a human being, at his most characteristic moment, in the most beautiful manner.' Over the years he exhibited in London galleries and published several acclaimed volumes of drawings, including Caricatures of Twenty-five Gentlemen (1896), The Poets' Corner (1904), Fifty Caricatures (1913), A Survey (1921), Rossetti and His Circle (1922), Things New and Old (1923), and Observations (1925). 'There is wit and barbed insight but no malice in [his] caricatures,' noted the Spectator. 'Beerbohm mocked only what he loved.'

In 1898 Beerbohm replaced George Bernard Shaw as drama critic for the Saturday Review. 'The younger generation is knocking at the door,' Shaw told readers. 'And as I open it there steps sprightly in the incomparable Max.' For the next twelve years Beerbohm wrote lively reviews of works by Ibsen, Strindberg, Shaw, and other playwrights. His three volumes of criticism, Around Theatres (1924), as well as the posthumous collections More Theatres: 1898-1903 (1969) and Last Theatres: 1904-1910 (1970), endure as important records of the London stage in the early twentieth century. 'In its different way, this body of writing is as remarkable as the dramatic criticism of Max's predecessor Shaw,' said Edmund Wilson.

Beerbohm produced scant fiction, but the little he did write is memorable for its whimsical invention. 'The Happy Hypocrite: A Fairy Tale for Tired Men,' his earliest short story, appeared in the Yellow Book in 1897. Beerbohm's tale is a lighter, more humorous version of Oscar Wilde's classic tale of moral degeneration, The Picture of Dorian Gray. The stories in Seven Men (1919) comprise fictional sketches of aesthetes and artists who are often seen to represent aspects of Beerbohm's own character. 'Among the masked dandies of Edwardian comedy, Max Beerbohm is the most happily armored by a deep and almost innocent love of himself as a work of art,' observed V. S. Pritchett. 'In his best stories there is more than a whisper of magic realism--a murmur, however distant, of questions about the nature of reality,' wrote John Mortimer.

Zuleika Dobson, Beerbohm's sole novel, was published in 1911. This satiric fantasy depicts the havoc caused by a beautiful woman among the susceptible undergraduates at a fictitious Oxford college. V. S. Pritchett stated: 'Edwardian literature has many . . . stories whose frivolity half discloses the price a culture is paying for its manners and illusions. Zuleika Dobson is one of the funniest and most lyrical of these tales.'

A Christmas Garland (1912), which Henry James called 'the most intelligent thing that has been produced in England for many a long day,' is Beerbohm's prose parody of such notables as Thomas Hardy, Rudyard Kipling, and Joseph Conrad. 'A Christmas Garland is surely the liber aureus of prose parody,' said John Updike. 'What makes Max, as a parodist, incomparable--more than the calm mounting from felicity to felicity and the perfectly scaled enlargement of every surface quirk of the subject style&mdashis the way he seizes and embraces, with something like love, the total personality of the parodee. He seems to enclose in a transparent omniscience the genius of each star as, in A Christmas Garland, he methodically moves across the firmament of Edwardian letters.'

'My gifts are small,' Beerbohm once reflected. 'I've used them very well and discreetly, never straining them; and the result is that I've made a charming little reputation.' In 1910 he married American actress Florence Kahn and settled in Rapallo, Italy. Knighted in 1939, Sir Max Beerbohm died in Rapallo on May 20, 1956. Several books drawn from his papers appeared posthumously, including The Incomparable Max (1962); Max in Verse (1963); Max Beerbohm's Letters to Reggie Turner (1964); A Peep into the Past, and Other Prose Pieces (1972); and Beerbohm's Literary Caricatures (1977). 'Beerbohm was a genius of the purest kind,' judged Evelyn Waugh. 'He stands at the summit of his art.' His biographer Lord David Cecil concluded: 'He was England's supreme parodist and caricaturist, her most exquisite master of satiric fantasy.' 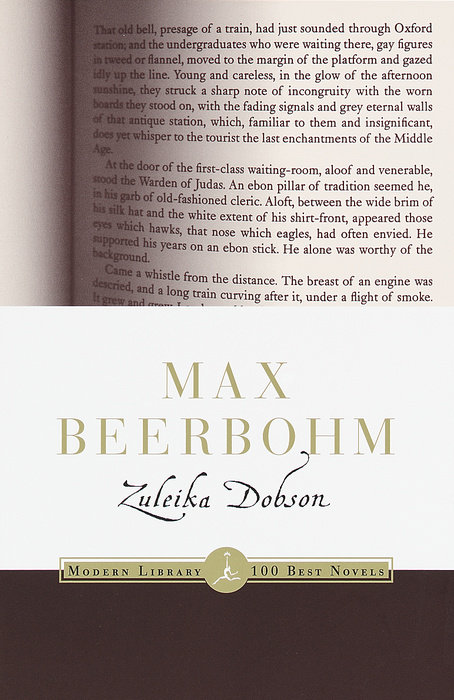