A fascinating history of the Jews, told by a master novelist, here is Chaim Potok's fascinating, moving four thousand-year history. Recreating great historical events, exporing Jewish life in its infinite variety and in many eras and places, here is a unique work by a singular Jewish voice.

An excerpt from Wanderings


I am an American, a Jew. Early in this century my father came to America from Poland. He had served in a Polish unit of the Austrian army during the First World War and had returned home to a strange reward: a pogrom.

He crossed the Atlantic but underwent no sea change. He never grasped the essential difference between the Christian in America and the Christian in Europe. Though beardless, and garbed as a twentieth-century man, he was a very pious Jew. He saw himself mirrored in the eye of most American gentiles as a Jewish Caliban.

He spoke often about the strange destiny of our people, a destiny chosen for us by the transcendent One God who had created man in His own image, thereby making each and every one of us unique and of infinite worth. For some mysterious reason, God’s world was imperfect. Man’s task was to help God perfect it.

My father often spoke in military terms: the Jews were the vanguard of mankind, the reconnaissance troops, and therefore prone to taking the highest casualties. But we would succeed one day in establishing the Kingdom of God on earth. Of that he had no doubt. Unlike the English historian G. M. Trevelyan, who regarded history as having no beginning and no end, my father saw history as the path that led from the creation of the world by God almost six thousand years ago to the future coming of the Messiah and the redemption, first of Jewry and then of all mankind. It was the sacred duty of the Jew to lead man along that path; it was the demonic intent of unrighteous gentiles to try to kill us along the way.

In the schools that served me as daytime homes during the early decades of my life, I was taught my father’s Judaism and Jewish history: the taken-for-granted obligation to observe the commandments of God; the story of the creation and the eating of the apple and the first murder and the Flood; I learned of Abraham and the covenant with God; a son was nearly sacrificed by a father in a gesture of ultimate faith (I remember how I trembled the first time I read that chilling story); patriarchs roamed a promised land; strong-willed women loved, quarreled, and connived; brothers fought, and one was sold into slavery and became second in command to the great pharaoh of Egypt; then the long enslavement and the coming of Moses; plagues; freedom; the crossing of a miraculously parted sea and the Revelation on a desolate mountaintop; the wandering in the wilderness; the death of Aaron and Moses; the conquest of Canaan by Joshua; tribal military chieftains labeled “judges”; aged Samuel; tragic Saul; heroic David conquering Jerusalem; wise Solomon building the first Temple; evil Israelite kings and fearless spokesmen for God called prophets; the destruction—because of our own sins; exile to Babylon; return; Ezra and a new covenant with God; Nehemiah and a new Jerusalem; the age of Alexander and the Hellenizing Syrians; the brave Maccabees; then Rome and rabbis and blood and death and the long exile in which my father and mother and sisters and brother and I were now a link in the chain of generations leading to the Messiah.

It was a history rich with ideas, hallowed by martyrs, characterized by a familial intimacy with God and a tenacious fixing of the eyes upon the promised future. I studied it in depth and did not find it difficult to feel myself part of it—especially when I discovered how to cope with its fundamentalism during the years I learned to appreciate and use modern scientific methods of research into ancient writings. I lived at ease in the core of my faith.

Then I entered the American army. I too crossed an ocean. In the shattered villages of Korea, in the exquisite temples of Japan, in the teeming Chinese hovels of Hong Kong, in the vile back streets of Macao, all the neat antique coherence of my past came undone.

Once we bulldozed a piece of Korean earth on our compound to lay a cement foundation for a Quonset hut and discovered a mass grave of children who had been butchered during the Korean War. We were always finding such graves in Korea. No one seemed to know who had done the killing; no one really cared. We would cover them over and build elsewhere.

My early decades had prepared me for everything—except the two encounters I in fact experienced: a meeting with a vast complex of cultures perfectly at ease without Jews and Judaism, and a confrontation with the beautiful and the horrible in the world of oriental human beings. It was not the anguish of my own people that sundered me—that I had come to accept as part of our destiny—but the loveliness and the suffering I saw in the lives of pagans.

Jewish history began in a world of pagans; my own Judaism was transformed in another such world.

I have spent the subsequent decades in an evolving reshaping of my faith. I have done this by writing novels; that is my personal way of giving shape to thought. The novels are about certain kinds of culture conflicts in the present. This book is about the past that led to this present.

I write this book in Jerusalem and in certain cities of Europe and America. I write it in the bloodiest century in the history of my people; probably in the history of mankind. To be a Jew in this century is to understand fully the possibility of the end of mankind, while at the same time believing with certain faith that we will survive. There is so much about Jewish history that is mysterious and bewildering; I write with no illusions that I will attain to sudden revelations. I have only the hope that somehow in the writing, a small light will be shed on a nagging question: How is it that after almost four thousand years of tense, fructifying, and often violent culture confrontation—with ancient paganism, with Greece and Rome, with Christianity and Islam, and, for the past two hundred years, with modern secularism—how is it that after all this, Jews still exist and are still—as I am here—attempting to understand and interpret their history?

Chaim Potok was born in New York City in 1929. He graduated from Yeshiva University and the Jewish Theological Seminary of America, was ordained as a rabbi, and earned his PhD in philosophy from the University of Pennsylvania. He also served as editor of the Jewish Publication Society of America. Potok’s first novel, The Chosen, published in 1967, received the Edward Lewis Wallant Memorial Book Award and was nominated for the National Book Award. He is author of eight novels, including In the Beginning and My Name Is Asher Lev, and Wanderings, a history of the Jews. He died in 2002. 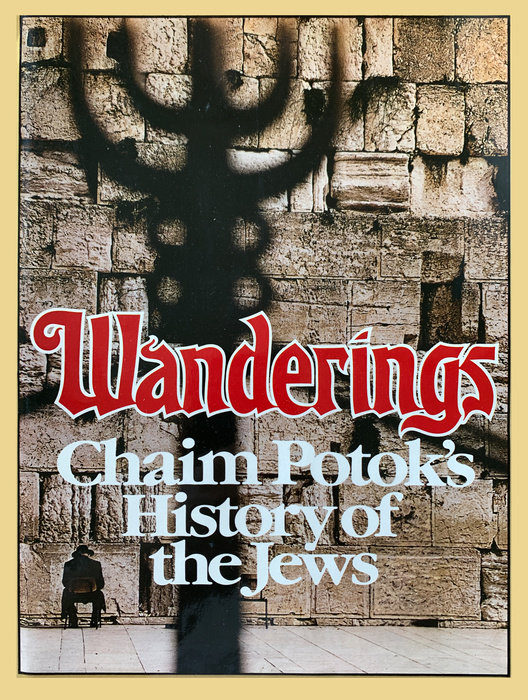