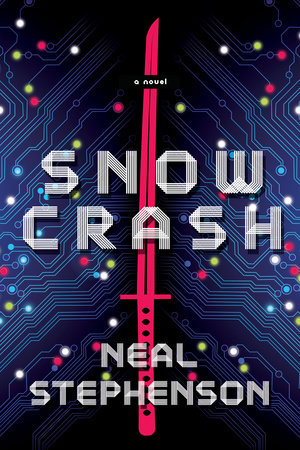 Hiro lives in a Los Angeles where franchises line the freeway as far as the eye can see. The only relief from the sea of logos is within the autonomous city-states, where law-abiding citizens don’t dare leave their mansions.

Hiro delivers pizza to the mansions for a living, defending his pies from marauders when necessary with a matched set of samurai swords. His home is a shared 20 X 30 U-Stor-It. He spends most of his time goggled in to the Metaverse, where his avatar is legendary.

But in the club known as The Black Sun, his fellow hackers are being felled by a weird new drug called Snow Crash that reduces them to nothing more than a jittering cloud of bad digital karma (and IRL, a vegetative state).

Investigating the Infocalypse leads Hiro all the way back to the beginning of language itself, with roots in an ancient Sumerian priesthood. He’ll be joined by Y.T., a fearless teenaged skateboard courier. Together, they must race to stop a shadowy virtual villain hell-bent on world domination.
Read more
Close

“One of the most popular sci-fi books of all time . . . It stands as a foundational text of the cyberpunk movement.”—Wired

“[Snow Crash] not only made the name of its author Neal Stephenson, it elevated him to the status of a technological Nostradamus.”—Open Culture

“A cross between Neuromancer and Thomas Pynchon’s Vineland . . . This is no mere hyperbole.”—The San Francisco Bay Guardian

The Deliverator belongs to an elite order, a hallowed sub-category. He's got esprit up to here. Right now he is preparing to carry out his third mission of the night. His uniform is black as activated charcoal, filtering the very light out of the air. A bullet will bounce off its arachno-fiber weave like a wren hitting a patio door, but excess perspiration wafts through it like a breeze through a freshly napalmed forest. Where his body has bony extremities, the suit has sintered armorgel: feels like gritty jello, protects like a stack of telephone books.

When they gave him the job, they gave him a gun. The Deliverator never deals in cash, but someone might come after him anyway–might want his car, or his cargo. The gun is a tiny, aero-styled, lightweight, the kind of a gun a fashion designer would carry; it fires teensy darts that fly at five times the velocity of an SR-71 spy plane, and when you get done using it, you have to plug it in to the cigarette lighter, because it runs on electricity.

The Deliverator never pulled that gun in anger, or in fear. He pulled it once in Gila Highlands. Some punks in Gila Highlands, a fancy Burbclave, wanted themselves a delivery, and they didn't want to pay for it. Thought they would impress the Deliverator with a baseball bat. The Deliverator took out his gun, centered its laser doo-hickey on that poised Louisville Slugger, fired it. The recoil was immense, as though the weapon had blown up in his hand. The middle third of the baseball bat turned into a column of burning sawdust accelerating in all directions like a bursting star. Punk ended up holding this bat handle with milky smoke pouring out the end. Stupid look on his face. Didn't get nothing but trouble from the Deliverator.

Since then the Deliverator has kept the gun in the glove compartment and relied, instead, on a matched set of samurai swords, which have always been his weapon of choice anyhow. The punks in Gila Highlands weren't afraid of the gun, so the Deliverator was forced to use it. But swords need no demonstration.

Why is the Deliverator so equipped? Because people rely on him. He is a roll model. This is America. People do whatever the f*** they feel like doing, you got a problem with that? Because they have a right to. And because they have guns and no one can f***ing stop them. As a result, this country has one of the worst economies in the world. When it gets down to it–we're talking trade balances here–once we've brain-drained all our technology into other countries, once things have evened out, they're making cars in Bolivia and microwaves in Tadzhikistan and selling them here–once our edge in natural resources has been made irrelevant by giant Hong Kong ships and dirigibles that can ship North Dakota all the way to New Zealand for a nickel–once the Invisible Hand has taken all those historical inequities and smeared them out into a broad global layer of what a Pakistani bricklayer would consider to be prosperity–y'know what? There's only four things we do better than anyone else

The Deliverator used to make software. Still does, sometimes. But if life were a mellow elementary school run by well-meaning education Ph.D.s, the Deliverator's report card would say; "Hiro is so bright and creative but needs to work harder on his cooperation skills."

So now he has this other job. No brightness or creativity involved–but no cooperation either. Just a single principle: The Deliverator stands tall, your pie in thirty minutes or you can have it free, shoot the driver, take his car, file a class-action suit. The Deliverator has been working this job for six months, a rich and lengthy tenure by his standards, and has never delivered a pizza in more than twenty-one minutes.

Oh, they used to argue over times, many corporate driver-years lost to it: homeowners, red-faced and sweaty with their own lies, stinking of Old Spice and job-related stress, standing in their glowing yellow doorways brandishing their Seikos and waving at the clock over the kitchen sink, I swear, can’t you guys tell time?

Didn’t happen anymore. Pizza delivery is a major industry. A managed industry. People went to CosaNostra Pizza University four years just to learn it. Came in its doors unable to write an English sentence, from Abkhazia, Rwanda, Guanajuato, South Jersey, and came out knowing more about pizza than a Bedouin knows about sand. And they had studied this problem. Graphed the frequency of doorway delivery-time disputes. Wired the early Deliverators to record, then analyze, the debating tactics, the voice-stress histograms, the distinctive grammatical structures employed by white middle-class Type A Burbclave occupants who against all logic had decided that this was the place to take their personal Custerian stand against all that was stale and deadening in their lives: they were going to lie, or delude themselves, about the time of their phone call and get themselves a free pizza; no, they deserved a free pizza along with their life, liberty, and pursuit of whatever, it was f***ing inalienable. Sent psychologists out to these people’s houses, gave them a free TV set to submit to an anonymous interview, hooked them to polygraphs, studied their brain waves as they showed them choppy, inexplicable movies of porn queens and late-night car crashes and Sammy Davis, Jr., put them in sweet-smelling, mauve-walled rooms and asked them questions about Ethics so perplexing that even a Jesuit couldn’t respond without committing a venial sin.

The analysts at CosaNostra Pizza University concluded that it was just human nature and you couldn’t fix it, and so they went for a quick cheap technical fix: smart boxes. The pizza box is a plastic carapace now, corrugated for stiffness, a little LED readout glowing on the side, telling the Deliverator how many trade imbalance-producing minutes have ticked away since the fateful phone call. There are chips and stuff in there. The pizzas rest, a short stack of them, in slots behind the Deliverator’s head. Each pizza glides into a slot like a circuit board into a computer, clicks into place as the smart box interfaces with the onboard system of the Deliverator’s car. The address of the caller has already been inferred from his phone number and poured into the smart box’s built-in RAM. From there it is communicated to the car, which computes and projects the optimal route on a heads-up display, a glowing colored map traced out against the windshield so that the Deliverator does not even have to glance down.

If the thirty-minute deadline expires, news of the disaster is flashed to CosaNostra Pizza Headquarters and relayed from there to Uncle Enzo himself–the Sicilian Colonel Sanders, the Andy Griffith of Bensonhurst, the straight razor-swinging figment of many a Deliverator’s nightmares, the Capo and prime figurehead of CosaNostra Pizza, Incorporated–who will be on the phone to the customer within five minutes, apologizing profusely. The next day, Uncle Enzo will land on the customer’s yard in a jet helicopter and apologize some more and give him a free trip to Italy–all he has to do is sign a bunch of releases that make him a public figure and spokesperson for CosaNostra Pizza and basically end his private life as he knows it. He will come away from the whole thing feeling that, somehow, he owes the Mafia a favor.

The Deliverator does not know for sure what happens to the driver in such cases, but he has heard some rumors. Most pizza deliveries happen in the evening hours, which Uncle Enzo considers to be his private time. And how would you feel if you had to interrupt dinner with your family in order to call some obstreperous dork in a Burbclave and grovel for a late f***ing pizza? Uncle Enzo has not put in fifty years serving his family and his country so that, at the age when most are playing golf and bobbling their granddaughters, he can get out of the bathtub dripping wet and lie down and kiss the feet of some sixteen-year-old skate punk whose pepperoni was thirty-one minutes in coming. Oh, God. It makes the Deliverator breathe a little shallower just to think of the idea.

Neal Stephenson is the author of New York Times bestsellers including The Diamond Age, Zodiac, Cryptonomicon, Quicksilver, The Confusion, The System of the World, REAMDE, Anathem, Seveneves, Fall: or Dodge in Hell, and Termination Shock, as well as nonfiction works such as In The Beginning . . . Was the Command Line. He has worked for Blue Origin and Magic Leap, and more recently co-founded Lamina1, a startup creating an open metaverse platform. More by Neal Stephenson