The Classic Study of Tomorrow

From the author of Future Shock, a striking way out of today’s despair . . . a bracing, optimistic look at our new potentials.

The Third Wave makes startling sense of the violent changes now battering our world. Its sweeping synthesis casts fresh light on our new forms of marriage and family, on today's dramatic changes in business and economics. It explains the role of cults, the new definitions of work, play, love, and success. It points toward new forms of twenty-first-century democracy.

Praise for The Third Wave

“Will mesmerize readers, and rightly so.”—Vogue

“Alvin Toffler . . . has written another blockbuster . . . a powerful book.”—The Guardian

“Fresh ideas, clearly explained. . . . Toffler has proven again that he is a master.”—United Press International

“Toffler has imagination and an ability to think of various future possibilities by transcending prevailing values, assumptions and myths.”—Associated Press

“Once you have walked into his version of the future, you may decide never again to whitewash some of the built-in frailties of the real present.”—Financial Post

“Rich, stimulating and basically optimistic . . . will unquestionably aid many to a greater understanding of [today’s] puzzling social changes.”—The Globe & Mail

“A detailed breathtakingly bold projection of the social changes required if we are to survive. . . . Toffler’s vision of a democratic, self-sustaining utopia is a brave alternative to recent grim warnings.”—Cosmopolitan

An excerpt from The Third Wave

In a time when terrorists play death-games with hostages, as currencies careen amid rumors of a third World War, as embassies flame and storm troopers lace up their boots in many lands, we stare in horror at the headlines. The price of gold—that sensitive barometer of fear—breaks all records. Banks tremble. Inflation rages out of control. And the governments of the world are reduced to paralysis or imbecility.

Faced with all this, a massed chorus of Cassandras fills the air with doom-song. The proverbial man in the street says the world has “gone mad,” while the expert points to all the trends leading toward catastrophe.

It contends that the world has not swerved into lunacy, and that, in fact, beneath the clatter and jangle of seemingly senseless events there lies a startling and potentially hopeful pattern. This book is about that pattern and that hope.

The Third Wave is for those who think the human story, far from ending, has only just begun.


A powerful tide is surging across much of the world today, creating a new, often bizarre, environment in which to work, play, marry, raise children, or retire. In this bewildering context, businessmen swim against highly erratic economic currents; politicians see their ratings bob wildly up and down; universities, hospitals, and other institutions battle desperately against inflation. Value systems splinter and crash, while the lifeboats of family, church, and state are hurled madly about.

Looking at these violent changes, we can regard them as isolated evidences of instability, breakdown, and disaster. Yet, if we stand back for a longer view, several things become apparent that otherwise go unnoticed.

To begin with, many of today’s changes are not independent of one another. Nor are they random. For example, the crack-up of the nuclear family, the global energy crisis, the spread of cults and cable television, the rise of flextime and new fringe-benefit packages, the emergence of separatist movements from Quebec to Corsica, may all seem like isolated events. Yet precisely the reverse is true. These and many other seemingly unrelated events or trends are interconnected. They are, in fact, parts of a much larger phenomenon: the death of industrialism and the rise of a new civilization.

So long as we think of them as isolated changes and miss this larger significance, we cannot design a coherent, effective response to them. As individuals, our personal decisions remain aimless or self-canceling. As governments, we stumble from crisis to crash program, lurching into the future without plan, without hope, without vision.

Lacking a systematic framework for understanding the clash of forces in today’s world, we are like a ship’s crew, trapped in a storm and trying to navigate between dangerous reefs without compass or chart. In a culture of warring specialisms, drowned in fragmented data and fine-toothed analysis, synthesis is not merely useful—it is crucial.

For this reason, The Third Wave is a book of large-scale synthesis. It describes the old civilization in which many of us grew up, and presents a careful, comprehensive picture of the new civilization bursting into being in our midst.

So profoundly revolutionary is this new civilization that it challenges all our old assumptions. Old ways of thinking, old formulas, dogmas, and ideologies, no matter how cherished or how useful in the past, no longer fit the facts. The world that is fast emerging from the clash of new values and technologies, new geopolitical relationships, new life-styles and modes of communication, demands wholly new ideas and analogies, classifications and concepts. We cannot cram the embryonic world of tomorrow into yesterday’s conventional cubbyholes. Nor are the orthodox attitudes or moods appropriate.

Thus, as the description of this strange new civilization unfolds in these pages, we will find reason to challenge the chic pessimism that is so prevalent today. Despair—salable and self-indulgent—has dominated the culture for a decade or more. The Third Wave concludes that despair is not only a sin (as C. P. Snow, I believe, once put it), but that it is also unwarranted.

I am under no Pollyannaish illusions. It is scarcely necessary today to elaborate on the real dangers facing us—from nuclear annihilation and ecological disaster to racial fanaticism or regional violence. I have written about these dangers myself in the past, and will no doubt do so again. War, economic debacle, large-scale technological disaster—any of these could alter future history in catastrophic ways.

Nevertheless, as we explore the many new relationships springing up—between changing energy patterns and new forms of family life, or between advanced manufacturing methods and the self-help movement, to mention only a few—we suddenly discover that many of the very same conditions that produce today’s greatest perils also open fascinating new potentials.

The Third Wave shows us these new potentials. It argues that, in the very midst of destruction and decay, we can now find striking evidences of birth and life. It shows clearly and, I think, indisputably, that—with intelligence and a modicum of luck—the emergent civilization can be made more sane, sensible, and sustainable, more decent and more democratic than any we have ever known.

If the main argument of this book is correct, there are powerful reasons for long-range optimism, even if the transitional years immediately ahead are likely to be stormy and crisis-ridden.


As I’ve worked on The Third Wave in the past few years, lecture audiences have repeatedly asked me how it differs from my earlier work Future Shock.

Author and reader never see quite the same things in a book. I view The Third Wave as radically different from Future Shock in both form and focus. To begin with, it covers a much wider sweep of time—past as well as future. It is more prescriptive. Its architecture is different. (The perceptive reader will find that its structure mirrors its central metaphor—the clash of waves.)

Substantively, the differences are even more pronounced. While Future Shock called for certain changes to be made, it emphasized the personal and social costs of change. The Third Wave, while taking note of the difficulties of adaptation, emphasizes the equally important costs of not changing certain things rapidly enough.

Moreover, while in the earlier book I wrote of the “premature arrival of the future,” I did not attempt to sketch the emergent society of tomorrow in any comprehensive or systematic way. The focus of the book was on the processes of change, not the directions of change.

In this book, the lens is reversed. I concentrate less on acceleration, as such, and more on the destinations toward which change is carrying us. Thus one work focuses more heavily on process, the other on structure. For these reasons, the two books are designed to fit together, not as source and sequel, but as complementary parts of a much larger whole. Each is very different. But each casts light on the other.

Alvin Toffler (1928–2016) was an American writer and futurist whose list of bestselling books includes Future Shock, The Third Wave, and Powershift. He was a cofounder of Toffler Associates, a consulting firm for companies and governments worldwide on advances in economics, technology, and social change. In France, where his work won the prestigious Prix du Meilleur Livre Étranger (Best Foreign Book Prize), Alvin was named an Officier de l’Ordre des Arts et des Lettres.

The Classic Study of Tomorrow 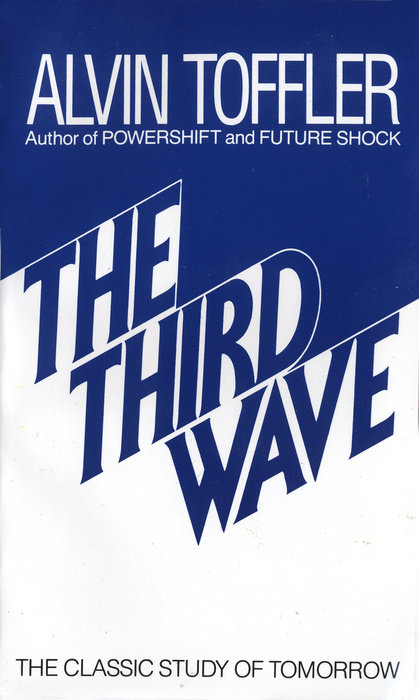