NEW YORK TIMES BESTSELLER • Trailblazing food writer and beloved restaurant critic Ruth Reichl took the job (and the risk) of a lifetime when she entered the high-stakes world of magazine publishing. Now, for the first time, she chronicles her groundbreaking tenure as editor in chief of Gourmet.

“A must for any food lover . . . Reichl is a warm, intimate writer. She peels back the curtain to a glamorous time of magazine-making. You’ll tear through this memoir.”—Refinery29

When Condé Nast offered Ruth Reichl the top position at America’s oldest epicurean magazine, she declined. She was a writer, not a manager, and had no inclination to be anyone’s boss. Yet Reichl had been reading Gourmet since she was eight; it had inspired her career. How could she say no?

This is the story of a former Berkeley hippie entering the corporate world and worrying about losing her soul. It is the story of the moment restaurants became an important part of popular culture, a time when the rise of the farm-to-table movement changed, forever, the way we eat. Readers will meet legendary chefs like David Chang and Eric Ripert, idiosyncratic writers like David Foster Wallace, and a colorful group of editors and art directors who, under Reichl’s leadership, transformed stately Gourmet into a cutting-edge publication. This was the golden age of print media—the last spendthrift gasp before the Internet turned the magazine world upside down.

Complete with recipes, Save Me the Plums is a personal journey of a woman coming to terms with being in charge and making a mark, following a passion and holding on to her dreams—even when she ends up in a place she never expected to be.

Praise for Save Me the Plums

“In this smart, touching, and dishy memoir . . . Ruth Reichl recalls her years at the helm of Gourmet magazine with clear eyes, a sense of humor, and some very appealing recipes.”—Town & Country

“If you haven’t picked up food writing queen Ruth Reichl’s new book, Save Me the Plums, I highly recommend you fix that problem. . . . Reichl is in top form and ready to dish, with every chapter seeming like a dedicated behind-the-scenes documentary on its own.”—Soleil Ho, San Francisco Chronicle

An excerpt from Save Me the Plums

I was eight years old when I first found the magazine, sitting on the dusty wooden floor of a used-­book store. My father was a book designer who enjoyed the company of ancient volumes, and he often took me on book-­hunting expeditions around New York, leaving me with a pile of vintage magazines while he went off to prowl among the dark and crowded shelves. That day I picked up a tattered old issue of Gourmet, enchanted by the cover drawing of a majestic swordfish leaping joyfully from the water. This looked nothing like the ladies’ magazines my mother favored, with their recipes for turkey divan made with cans of mushroom soup, or pot roast topped with ketchup, and I opened it to find the pages filled with tales of food in faraway places. A story called “Night of Lobster” caught my eye, and as I began to read, the walls faded, the shop around me vanishing until I was sprawled on the sands of a small island off the coast of Maine. The tide was coming in, water tickling my feet as it crept across the beach. It was deep night, the sky like velvet, spangled with stars.

Much later I understood how lucky I was to have stumbled on that story. The author, Robert P. Tristram Coffin, was the poet laureate of Maine and a Pulitzer Prize winner with such an extraordinary gift for words that I could hear the hiss of a giant kettle and feel the bonfire burning as the flames leapt into the night. The fine spicy fragrance of lobster was so real to me that I reached for one, imagined tossing it from hand to hand until the shell was cool enough to crack. The meat was tender, briny, rich. Somewhere off in the distance a fish splashed, then swam silently away.

I closed the magazine, and the real world came into focus. I was a little girl leafing through the pages of a magazine printed long before I was born. But I kept turning the pages, enchanted by the writing, devouring tales of long-­lost banquets in Tibet, life in Paris, and golden fruit growing on strange tropical trees. I had always been an avid reader, but this was different: This was not a made-­up story; it was about real life.

I loved the ads for exotic ingredients you could send away for: oysters by the bushel, freshly picked watercress, alligator pears (avocados), and “frogs’ legs from the frogland of America.” Once I actually persuaded my parents to order a clambake in a pot from Saltwater Farm in Damariscotta, Maine. Eight live lobsters and a half peck of clams came swathed in seaweed and packed in ice. It cost $14.95, and all you had to do was poke holes in the top of the container and set it on the stove.

I couldn’t get enough of those old issues, and now when Dad went off exploring bookstores I had a quest of my own. The day I discovered a battered copy of The Gourmet Cookbook among the ancient issues, I begged Dad to buy it for me. “It’s only fifty cents,” I pleaded.

It came in handy the morning I opened the refrigerator in our small kitchen and found myself staring at a suckling pig. I jumped back, startled, and then did what any sensible person would do: reached for the cookbook. I was only ten, and I hoped it would have some advice on how to deal with the thing.

Sure enough, there it was, on page 391: “Roast Suckling Pig Parisienne.” There was even a handy photograph demonstrating how to truss the tiny animal.

I remember that moment, and not just because the recipe insisted on a lot of yucky stuff like putting a block of wood into the pig’s mouth (“to brace it for the apple that will be inserted later”) and boiling the heart for gravy. I remember it mostly because that was the day Mom finally admitted she was glad I’d found a hobby.

My mother’s interest in food was strictly academic. Asked what had possessed her to purchase the pig, she replied, “I’d never seen one before,” as if that was an adequate answer. The same logic had compelled her to bring home a can of fried grasshoppers, a large sea urchin with dangerously sharp spines, and a flashy magenta cactus flower. She had little interest in eating these items, but if I was going to insist on reading what she called “that ridiculous magazine,” she thought it should be put to use.

The fried grasshoppers were not a hit; I suspect the can had been sitting on a shelf for years, awaiting some gullible customer. And while the editors were eager to instruct me in the preparation of eels, bears, woodchucks, and snipe, they were strangely silent on the subject of sea urchins. When I finally managed to pry the creature open, I found the gooey black inside so appalling that nothing would have tempted me to taste it. As for the cactus flower, its great good looks camouflaged a total lack of flavor.

But the suckling pig was a different story. I did everything the cookbook suggested and then hovered anxiously near the oven, hoping it hadn’t led me astray. When the pig emerged all crackling skin and sweet soft meat, Mom was happy. “I’ve never tasted anything so delicious,” she grudgingly admitted. “That magazine might be useful after all.”

Ruth Reichl is the bestselling author of the memoirs Garlic and Sapphires, Tender at the Bone, and Comfort Me with Apples and the novel Delicious! She was editor in chief of Gourmet magazine for ten years. She lives in upstate New York with her husband and two cats. 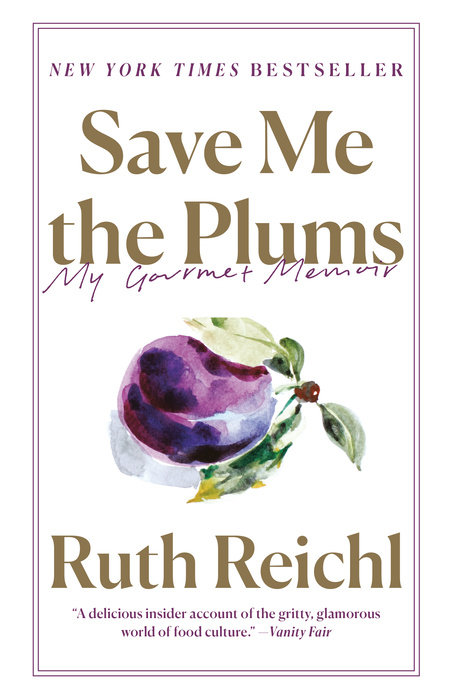