Presley Flynn is ripe to experience her secret fantasies . . . and Dmitri Pratt wants nothing more than to fulfill them. Once inside the elite Club Sin in Las Vegas, Presley is nervous but excited—and determined to surrender to her every desire. Dmitri is her Master, and his touch is like fire. With each careful, calculated caress, he unleashes her wildest inhibitions, giving her unimagined pleasure.

Presley is different than the other submissives Dmitri has mastered. The lifestyle is new to her, and so are the games they play at Club Sin. From the start, Presley stirs emotions in Dmitri far beyond the raw purity between a dom and the perfect sub. For the ecstasy they share goes beyond the dungeon, igniting a passion that claims the very depths of the heart.

Claimed is intended for mature audiences.

The duet of naughty novellas: BOUGHT BY THE BOSS

The Dirty Little Secrets series: BOUND BENEATH HIS PAIN | TIED TO HIS BETRAYAL | RESTRAINED UNDER HIS DUTY | CUFFED BY HIS CHARM

“Deliciously sexy, Stacey Kennedy’s Claimed will captivate you at once, leading you on a journey that you won’t want to end. A fabulous talent, Kennedy shines in this fast-paced and exciting novel.”—New York Times bestselling author Cheyenne McCray

“Okay. Wow. Seriously! This book was smoking hot with an awesome story and I loved every single second of it! By 10% I was hooked!”—About That Story

“I am itching to read the next novel as I will be wondering where it will take me.”—Love Romance Passion (five stars)

Includes a special message from the editor and the author, as well as excerpts from these Loveswept titles: Ruined, Arrested by Love, and Trying to Score.

An excerpt from Claimed

Presley Flynn scanned the foyer of the snazzy mansion and looked for something to hold on to as her roommate, Cora Adams, hustled her down the corridor. With a little shove, Cora added, “You wanted this, remember?”

Cora stepped in front of Presley, and her big blue eyes, lined with dark makeup, sparkled. Her long chocolate-colored hair fell over her black blouse, and her red lipstick covered pursed lips. “You told me you wanted to join the dungeon.”

Presley snorted. “You said I was a long-lost submissive who needed the lifestyle. Which, apparently, is so far from the truth, since why am I on the verge of puking all over this fancy hardwood floor?”

She turned to get the hell out of the place when Cora grabbed her arm, pulling Presley back in front of her. “One chance, Presley, that’s all you get. If you leave now, you won’t be allowed to come back.”

Cora walked forward, and Presley found herself matching her stride. They passed a grand wooden staircase on the left, leading to the upstairs. A huge wrought-iron balcony curved around the entire upper floor, which led to numerous doors used for God knew what.

Stopping near the doorway to the office that Presley had been avoiding for the last five minutes, she inhaled. “You’re right. I did come here for a reason.” To surrender to her every desire. “I don’t want to walk out the front door, but—” She pointed toward the office. “I’m scared shitless to walk through that door.”

“Of course you are.” Cora grinned. “Your darkest, most secret fantasies await you in that office.” Without another word, she spun on her heel and headed down the hallway in the opposite direction.

“Do you plan on coming in?”

Presley started at the powerful low voice that seemed to draw her forward, giving the fearful butterflies in her stomach a flutter of excitement. Her feet moved without thought as she entered the office, which looked much like a library.

Books filled the shelves at the far end of the room, along with a grand wooden desk. A computer and telephone and other office accessories sat on top of it. A sleek black leather couch was situated straight ahead, under the bay window.

“Ah, she finally decides to enter.”

Presley froze, as time halted. The man never raised his head to look at her, but he didn’t need to. His presence filled the room, making her entirely aware of him. He sat at the desk, his head bowed toward the paper he’d been reading. With the slight curve to his mouth, he stole the air from her lungs. He was hot.

As the owner of Club Sin and the president of Las Vegas’s top casino, Dmitri Pratt matched the mansion with his wealthy exuberance. Hard angles defined his jawline and cheekbones. His lips were lush and sculpted and his nose straight-edged. The sleeves of his black dress shirt were rolled up on his muscular forearms, displaying a tribal dragon tattoo on his left arm.

When she didn’t move, Dmitri stated, with his eyes still focused on the paper, “Take a seat on the couch.”

Exhaling slowly, she shed the tension in her chest as she made her way to the leather sofa and sat down. The coolness of the upholstery against her heated skin came as much needed relief. She crossed her legs, doing her best to portray confidence.

Stacey Kennedy is an outdoorsy, wine-drinking, nap-loving, animal-cuddling, USA Today bestselling romance author with a chocolate problem. She writes sexy contemporary romance with a dash of suspense and a sprinkle of heart and humor, including titles in her wildly hot Kinky Spurs, Club Sin, and Dirty Little Secrets series. She lives in southwestern Ontario with her family and does most of her writing surrounded by lazy dogs. 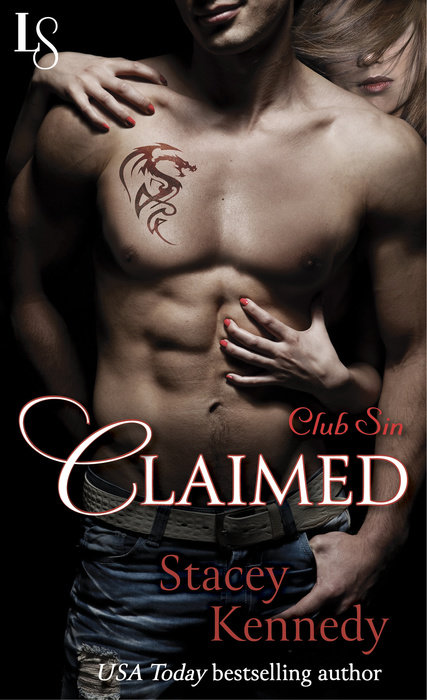