The year is 1601. Queen Elizabeth I is dying, childless. Her nervous kingdom has no heir. It is a capital crime even to think that Elizabeth will ever die. Potential successors secretly maneuver to be in position when the inevitable occurs. The leading candidate is King James VI of Scotland, but there is a problem.

The queen’s spymasters—hardened veterans of a long war on terror and religious extremism—fear that James is not what he appears. He has every reason to claim to be a Protestant, but if he secretly shares his family’s Catholicism, then forty years of religious war will have been for nothing, and a bloodbath will ensue. With time running out, London confronts a seemingly impossible question: What does James truly believe?

It falls to Geoffrey Belloc, a secret warrior from the hottest days of England’s religious battles, to devise a test to discover the true nature of King James’s soul. Belloc enlists Mahmoud Ezzedine, a Muslim physician left behind by the last diplomatic visit from the Ottoman Empire, as his undercover agent. The perfect man for the job, Ezzedine is the ultimate outsider, stranded on this cold, wet, and primitive island. He will do almost anything to return home to his wife and son.

Arthur Phillips returns with a unique and thrilling novel that will leave readers questioning the nature of truth at every turn.

An excerpt from The King at the Edge of the World

In the Palace of Felicity, in Constantinople, in the land of the Turks, early in the Christian year 1591, viziers to Murad the Great, third of that name, Sultan of the Ottomans, Custodian of the Two Holy Mosques, Caliph of Caliphs, dispatched an embassy to a far-off, sunless, primitive, sodden, heathen kingdom at the far cliffside edge of the civilized earth. The sultan chose as his ambassador a loyal and trusted man, but nobody of great importance, to negotiate with the people of that patch of damp turf.

Still, one must send someone to discuss trade and passports and the repatriation of unlucky Turkish sailors captured by the pirate crews who cowered in the harbors of that barbarian island. Those pirates thrived under the protection of the island’s capricious sultana, cruel in her poverty, weakness, fearful isolation, and unnatural state of unmarried womanly rule. She also begged for the Ottoman sultan’s support against her enemies, locked as she was in a bloody and endless sectarian combat with others of her kind about some incomprehensible quarrel over their false religion. The sultan felt it was time to send someone competent to the island of the English to wring concessions from her queen.

And so the ambassador and his entourage traveled to the end of the world. The ambassador, a eunuch who had been born a Christian in Portugal and recognized the truth of Mohammed when he was captured at the age of eleven, led a small retinue, only fourteen men: his chief adviser, a doctor of medicine, servants, scribes, guards. He carried for the island’s sultana, among many other gifts, a pair of lions, a scimitar, a unicorn’s horn, and ten English pirates captured by Turkish sailors.

This last gift assured that the ambassador and his men were welcomed to London by a torchlight parade through the gawping crowds near St. Lawrence Jewry church, winding to the large house where they would live for five months before returning to Constantinople.

Mahmoud Ezzedine, the doctor responsible for the health of the ambassador first and then of every man of the embassy after, had tried to avoid this journey, but his presence was specifically requested.

He had enriched himself and gained a reputation, won favor and honor, wife and child, home and security, all from his carefully amassed medical knowledge. He had risen to become one of the physicians entrusted with the very bodies of the sultan and his family, and his life in Constantinople lacked for nothing. There was no pleasure in losing a year of his wife’s company, of his son’s growth, of attempting a second child. Despite a lack of success so far, he had enjoyed the process. And, nearly as important, there was no pleasure in being away from the royal family, whose health he protected and cherished even beyond his own.

He had dared to ask an influential courtier if there were any possibility of another physician being sent in his place. The man said he would inquire, but he must have done so clumsily, for a few days later, Ezzedine was visited at home by Cafer bin Ibrahim, who would be the ambassador’s chief adviser for the expedition. “Dr. Ezzedine,” said Cafer, over coffee and figs brought by the doctor’s translucently veiled wife, Saruca, to the courtyard of the house and served under the shade and pink flowers of the Judas trees. “It was I who suggested to the sultan that he send you to England. And he was enthusiastic that you should protect us all. And you would now refuse?”

“Of course I would not dream of refusing.”

“I’m glad to hear you say it. I misunderstood some idiot at court who misrepresented your words and heart to me. You should be careful whom you entrust with them. May I take another fig?”

The doctor’s son, Ismail, cried for two nights after he learned of his father’s approaching departure for Christian England. “I won’t be gone so long as all that,” he told Saruca as the boy sobbed himself to sleep. “I will bring him something English as a gift. It is gratifying to think I will be so missed.” He reached for his wife’s hand across the bed.

“I will reassure him. The English don’t have lions.”

The next morning, however, the boy was in no mood to be condescended to. “I didn’t say lions,” he said, stamping a foot. “I said Lionheart. You are going to where Richard Lionheart came from.”

Ezzedine tried not to laugh. “But Lionheart died long ago. And all the Crusaders were defeated long ago. There are no more Crusaders.”

“But his people may still be like him. And want to hurt you.”

“I promise I will be safe,” said Dr. Ezzedine, kissing the top of the boy’s head. It smelled of something dusty but sweet, like a flower’s pollen.

Saruca told him the night before his departure, “It is bad that you go. I don’t want to watch you leave. So I practice imagining it and accepting it. I don’t want to curse your absence.” She kissed him in the morning as he stood outside, the boy clinging to his leg. “I accept this,” she said, before she began to weep and pulled the crying boy away. The doctor walked down to the sea. He tried not to look back but didn’t succeed.

Throughout their stay, the ambassador and his men had audiences with the English sultana at Greenwich and Nonsuch palaces and hosted her and her people in turn to feasts à la Turkeska at the ambassador’s residence, where they slaughtered all their meat themselves in the correct manner. For months, official negotiations were conducted in the cold rooms of the queen’s palaces or upon her green parklands. Conclusions were reached in matters of sea-lanes and free overland passages, the exchange of captured pirates/sailors, various immunities and protections for Englishmen voyaging in the empire of the Ottomans. Much of the diplomacy was a duel of imaginations, conceptions of events that had not yet occurred but were suddenly pressingly possible.

“And if an Englishman traveling in Qustantiniyya should wish to convert to the religion of Mohammed?” asked the ambassador’s chief adviser, Cafer bin Ibrahim. This particular question amused those of the English negotiators who had never left England but deeply troubled those English who had traveled, especially in Mahometan lands. There was much to be said for any religion that promised wealth, opportunity, and wives in this world. (This was a truth as obvious as air to the Turks, one they lived with daily. Back in Constantinople, bin Ibrahim, always hurriedly sold any of his Christian slaves who were considering converting to the true faith, or else he would have had to free them at a loss, enslavement of his co-religionists being illegal.)

Conversely, the question arose of Turk merchants traveling within England and of their free and safe passage throughout the kingdom, of what protections the queen might guarantee a hypothetical Mahometan buyer of, say, tin. Could such a one reside unmolested in London? Or travel to mines farther inland? And pray to Allah and his saints as his law demanded, five times daily? Even when it was pointed out that Jews (who were obviously worse and more dangerous) sometimes were free to move about, the English found the prospect of a freely roaming Turk so astonishing and obviously unsanitary to the body politic that the topic was temporarily set aside. But then one of the queen’s privy councillors, Robert Beale, pointed out that if (as the Turkish negotiators insisted) any Englishman in the Ottoman Empire who of free conscience wished to swear allegiance to Mohammed could not be prevented from doing so, then any Ottoman wishing to profess his devotion to Jesus Christ was similarly at liberty to do so while in England. The Ottoman ambassador readily agreed to this reciprocity, unable to conceive of any Ottoman who would see an advantage—spiritual or economic—in apostasy or, for that matter, take up permanent residence on this island. England was simply too poor and Christianity too unpromising in this life. After all, they were scarcely able to convince some of the English pirates to return from Constantinople. Even those in prison.

Meanwhile, at the suggestion of Dr. Ezzedine, all the men of the embassy performed zakat by paying, as their wealth allowed them, for the release or well-being of Turkish prisoners held in England. Ezzedine went further and, under escort, searched in the darkest parts of London for a rumored community of Moors awaiting passports or funds to sail for happier places. Dr. Ezzedine would have given generously to these unfortunates, if he could have found them.

Arthur Phillips is the internationally bestselling author of three New York Times Notable Books—Prague, the winner of the Los Angeles Times/Art Seidenbaum Award for First Fiction; The Song Is You; and The Tragedy of Arthur—and The Egyptologist. He lives in New York. 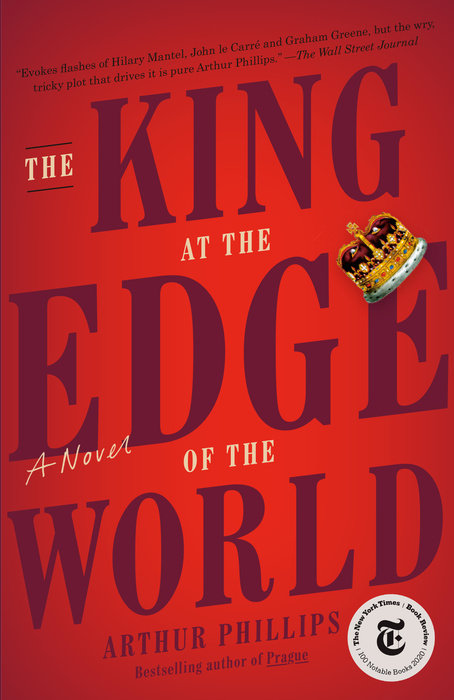