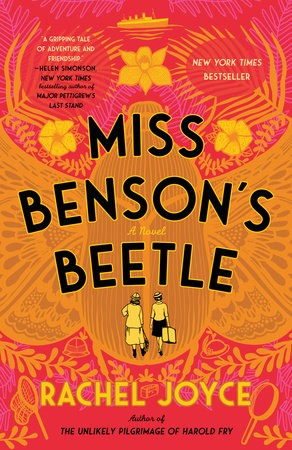 From the bestselling author of The Unlikely Pilgrimage of Harold Fry comes an uplifting, irresistible novel about two women on a life-changing adventure, where they must risk everything, break all the rules, and discover their best selves—together.

She’s going too far to go it alone.

It is 1950. London is still reeling from World War II, and Margery Benson, a schoolteacher and spinster, is trying to get through life, surviving on scraps. One day, she reaches her breaking point, abandoning her job and small existence to set out on an expedition to the other side of the world in search of her childhood obsession: an insect that may or may not exist—the golden beetle of New Caledonia. When she advertises for an assistant to accompany her, the woman she ends up with is the last person she had in mind. Fun-loving Enid Pretty in her tight-fitting pink suit and pom-pom sandals seems to attract trouble wherever she goes. But together these two British women find themselves drawn into a cross-ocean adventure that exceeds all expectations and delivers something neither of them expected to find: the transformative power of friendship.

“A hilarious jaunt into the wilderness of women’s friendship and the triumph of outrageous dreams.”—Kirkus Reviews
Read more
Close

Listen to a sample from Miss Benson's Beetle

“[Miss Benson’s Beetle] feels larger than Joyce’s other books—more expansive, swashbuckling, a wild adventure. It is the best so far of her novels, and the most inspiring. . . . At the heart of the story is the slow, unlikely friendship that builds between the two women and how that friendship enables them both to grow stronger, more capable and more self-reliant. . . . There is resilience, there is redemption, and there is beauty—great beauty.”—Minneapolis
Star Tribune

“I fell in love with the unlikely friendship between two wildly different women—their devotion to each other as they trek up and down mountains in someplace called New Caledonia is a hysterical delight. This novel made me realize how hungry I am for stories about women loving each other into being their best selves.”—Ann Napolitano, author of Dear Edward

“Miss Benson’s Beetle is a pure joyride. Sweet, witty, poignant, filled with intrigue and unlikely friendship, it’s a perfect escape. I loved it.”—Lisa Wingate, #1 New York Times bestselling author of Before We Were Yours and The Book of Lost Friends

“Whatever you may look for in a novel—adventure, fully realized characters, humor, poignancy, a chance to learn something new—is all here in Miss Benson’s Beetle. What’s also here is the particular grace and humanity that Rachel Joyce brings to her work. She reminds us that we all are broken in one way or another, but that we are capable—oftentimes in unexpected ways—of helping to make ourselves and others whole. This beautifully written novel is an absolute delight.”—Elizabeth Berg, author of The Story of Arthur Truluv

“As ever, Rachel Joyce made me laugh out loud, then weep for the battered majesty of ordinary human beings. Two unlikely heroines, their strange love, a pitiful villain, and a life-affirming search for miraculous beauty . . . all combine in a wild, hopeful picaresque journey into the soul.”—Bel Mooney, Daily Mail

“It’s full of humor, pathos, and insight, extolling the virtues of love, acceptance, and hard-won self-discovery—all that gleams about the human spirit. It’ll capture you right at the beginning and hold you tight the whole way through. This book is a pure and serious joy.”—Paula Saunders, author of The Distance Home

“For Eleanor Oliphant fans, Miss Benson’s Beetle is pure gold—full of complex, memorable women, plot twists, and a deft balance of hilarity and emotion, it’s a book you’ll stay up late to finish.”—J. Ryan Stradal, author of The Lager Queen of Minnesota

“Joyce’s sparkling latest pops with grit, resilience, and the power of friendship. . . . Joyce’s graceful touch and cutting humor . . . give the characters a rich complexity and depth. With a plucky protagonist and plenty of action, this is a winner.” —Publishers Weekly (starred review)
Read more
Close

The Golden Beetle of New Caledonia, 1914


When Margery was ten, she fell in love with a beetle.

It was a bright summer’s day, and all the windows of the rectory were open. She had an idea about sailing her wooden animals across the floor, two by two, but the set had belonged to her brothers once, and most of them were either colored in or broken. Some were even missing altogether. She was wondering if, under the circumstances, you could pair a three-legged camel and a bird with spots when her father came out of his study.

“Do you have a moment, old girl?” he said. “There’s something I want to show you."

So she put down the camel and the bird, and she followed him. She would have stood on her head if he’d asked.

Her father went to his desk. He sat there, nodding and smiling. She could tell he didn’t have a proper reason for calling her: he just wanted her to be with him for a while. Since her four brothers had left for war, he often called her. Or she’d find him loitering at the foot of the stairs, searching for something without seeming to know what it was. His eyes were the kindest in the world, and the bald top of his head gave him a naked look.

“I think I have something that might interest you, old girl,” he said. “Nothing much, but maybe you will like it.”

At this point he would normally produce something he’d found in the garden, but instead he opened a book called Incredible Creatures. It looked important, like the Bible or an encyclopedia, and there was a general smell of old things, but that could well have been him. Margery stood at his side, trying hard not to fidget.

The first page was a painted illustration of a man. He had a normal face and normal arms but, where his legs should have been, a green mermaid tail. She was amazed. The next picture was just as strange. A squirrel like one in the garden, but this had wings. And it went on, page after page, one incredible creature after another.

“Oh, no, dear heart. If these creatures live, they’ve not been found. There are people who believe they exist, but they haven’t caught them yet so they can’t prove it.”

She had no idea what he was talking about. Until that moment she’d assumed everything in the world was already found. It had never occurred to her things might happen in reverse. That you could see a picture of something in a book—that you could as good as imagine it—and then go off and look.

Her father showed her the Himalayan yeti, the Loch Ness Monster, the Patagonian giant sloth. There was the Irish elk with antlers as big as wings. The South African quagga, which started as a zebra until it ran out of stripes and became a horse. The great auk, the lion-tailed monkey, the Queensland tiger. So many incredible extra creatures in the world, and nobody had found a single one of them.

“Do you think they’re real?” she said.

Her father nodded. “I have begun to feel comforted,” he said, “by the thought of all we do not know, which is nearly everything.” With that upside-down piece of wisdom, he turned another page. “Ah!”

He pointed at a speck. A beetle.

Well, how nothing this was. How small and ordinary. She couldn’t see what it was doing in a book of Incredible Creatures, never mind whether it was not yet found. It was the sort of thing she would tread on and not notice.    He told her the head of a beetle was called the head, the middle was the thorax, and the bottom half was the abdomen. Beetles had two pairs of wings—did she know that? One delicate set that did the actual flying, and another hardened pair to protect the first. There were more kinds of beetle on God’s Earth than any other species, and they were each unique in remarkable ways.

“It looks a bit plain,” she said. Margery had heard her aunts call her plain. Not her brothers, though. They were as handsome as horses.

He turned to the next page, and her insides gave a lurch.

Here the beetle was again, magnified about twenty times. And she had been wrong. She had been so wrong, she could hardly believe her eyes. Close up, that small plain thing was not plain, not one bit. Oval in shape and gold all over, it was incandescent. Gold head, gold thorax, gold abdomen. Even its tiny legs were gold, as if Nature had taken a bit of jewelry and made an insect instead. It was infinitely more glorious than a man with a tail.

“The golden beetle of New Caledonia,” said her father. “Imagine how it would be to find this one and bring it home.”

Before she could ask more, there was a ring on the outside bell and he eased himself to his feet. He closed the door gently behind him, as if it had feelings, and left her alone with the beetle. She reached out her finger to touch it.

Until now, Margery hadn’t shared her father’s love of insects—he was often in the garden with a sweep net, but it was more the sort of thing he would have done with her brothers. Yet, as her finger met the golden beetle, something happened: a spark seemed to fly out and her future opened. She went hot and cold. She would find the beetle. It was that simple. She would go to wherever New Caledonia was, and bring it home. She actually felt struck, as if the top of her head had been knocked off. Already she could see herself leading the way on a mule while an assistant carried her bags at the rear.

But when the Reverend Tobias Benson returned, he didn’t seem to remember anything about the beetle, let alone Margery. He walked slowly to the desk and riffled through papers, picking them up and putting them down, as if none of them were the things they should have been. He lifted a paperweight, then a pen, and afterward he stowed the paperweight back where the pen had been, while the pen he seemed to have no clue about. It was possible he had completely forgotten what a pen was for. He just stared, while tears fell from his eyes like string.

He took something from the drawer and stepped through the French windows, and before Margery realized what had happened, he’d shot himself.

Rachel Joyce is the author of the Sunday Times and international bestsellers The Unlikely Pilgrimage of Harold Fry, The Love Song of Miss Queenie Hennessy, and Perfect. The Unlikely Pilgrimage of Harold Fry was short-listed for the Commonwealth Book Prize and long-listed for the Man Booker Prize and has been translated into thirty-six languages. Joyce was awarded the Specsavers National Book Awards New Writer of the Year in 2012. She is also the author of the digital short story A Faraway Smell of Lemon and is the award-winning writer of more than thirty original afternoon plays and classic adaptations for BBC Radio 4. Rachel Joyce lives with her family in Gloucestershire.