The Rise of the Navy SEALs

A gripping history chronicling the fits and starts of American special operations and the ultimate rise of the Navy SEALs from unarmed frogmen to elite, go-anywhere commandos—as told by one of their own.

“Deeply researched, well organized, and incredibly engaging . . . This is our legacy with all the warts, the challenges, and the heroics in one concise volume.”—Admiral William H. McRaven, #1 New York Times bestselling author and former commander, United States Special Operations Command

How did the US Navy—the branch of the US military tasked with patrolling the oceans—ever manage to produce a unit of raiders trained to operate on land? And how, against all odds, did that unit become one of the world’s most elite commando forces, routinely striking thousands of miles from the water on the battlefields of Iraq, Afghanistan, Syria, even Central Africa?

Behind the SEALs’ improbable rise lies the most remarkable underdog story in American military history—and in these pages, former Navy SEAL Benjamin H. Milligan captures it as never before.

Told through the eyes of remarkable leaders and racing from one longshot, hair-curling raid to the next, By Water Beneath the Walls is the tale of the unit’s heroic naval predecessors, and the evolution of the SEALs themselves. But it’s also the story of the forging of American special operations as a whole—and how the SEALs emerged from the fires as America’s first permanent commando force when again and again some other unit seemed predestined to seize that role.

Here Milligan thrillingly captures the outsize feats of the SEALs’ frogmen forefathers in World War II, the Korean War, and elsewhere, even as he plunges us into the second front of interservice rivalries and personal ambition that shaped the SEALs’ evolution.

In equally vivid, masterful detail, he chronicles key early missions undertaken by units like the Marine Raiders, Army Rangers, and Green Berets, showing us how these fateful, bloody moments helped create the modern American commando—even as they opened up pivotal opportunities for the Navy.

Finally, he takes us alongside as the SEALs at last seize the mantle of commando raiding, and discover the missions of capture/kill and counterterrorism that would define them for decades to come.

Written with the insight that can only come from a combat veteran and a member of the book’s tribe, By Water Beneath the Walls is an essential new history of the SEAL teams, a crackling account of desperate last stands and unforgettable characters accomplishing the impossible—and a riveting epic of the dawn of American special operations.

An excerpt from By Water Beneath the Walls

The Reluctant Creation and Violent Demise of the Navy’s First Commandos, the Marine Corps Raiders

Except for some magnificent excursions into the deserts of Libya and up the slopes of Chapultepec, the US Marine Corps—­from the American Revolution to the American Civil War—­was mostly an indentured adjunct of the blue-­water American Navy. In peace, a ramrod insurance against mutiny; in battle, mast-­clinging marksmen intended to replicate Admiral Nelson’s fate upon the enemy—Nelson had been killed by a French sniper in a crow’s nest. Later, after the Navy’s conversion to steam stacks and the elimination of mast-­top rifle nests, the Marines had adapted too, matching themselves to meet the national demand for foreign expedition. What followed was a Marine Corps of broad-­brimmed campaign hats and leg-­wrapped puttees, of guerrilla hunters like Smedley Butler and Chesty Puller, of brushfire victories in China, Haiti, the Dominican Republic, Nicaragua. It was a Marine Corps that had not only stretched the Navy’s reach beyond the beaches that blocked its ships but along the way had also stretched the Navy’s expectations for its own go-­anywhere utility force.

Because of this history, the Marines of this period seemed poised to evolve into the Navy’s very own corps of guerrilla hunters and amphibious raiders, but this was a logic that was upended during the First World War, when the Marines’ battles at Belleau Wood, Soissons, and Blanc Mont proved as far removed from their small-­war past as was a man from a monkey. More important, these meat grinders proved the Marines were every bit the battlefield equals of their soldier-­cousins in the US Army, an upstaging that the Army sought to avenge by harnessing Congress’s belt-­tightening calls for consolidation in the early 1920s to turn the corps’ 13,000 Leathernecks into soldiers.

Threatened by consolidation with the US Army, by disbandment, by the elimination of their entire branch of service, the planners of the US Marine Corps scrambled for a solution. Their options: 1) decrease in size and thereby stature to return to filling the Navy’s need for a shipborne utility force—­essentially to return to their past as the Navy’s guerrilla hunters and not-­quite amphibious raiders; or 2) identify a future enemy and a future mission that would catapult the Marine Corps to an equal rank with the Navy and Army and thereby preserve it for half a century. Actually, this wasn’t much of a choice at all; only one future appealed to the Marine Corps’ planners: the option that would do nothing to satisfy the Navy’s inland ambitions. More important for our purposes, it was a choice that would unintentionally produce a unit of raiders the Marine Corps didn’t want, and a raid so near to disaster that its Navy planners wouldn’t want any more of them, at least not from the Marine Corps.

A composite of islands and rapaciousness, the Empire of Japan was an enemy defended by water and fueled by a lust for resources. After the First World War, the only power that had stood between this lust and the vulnerable islands practically sinking beneath the weight of oil, tin, and rubber was the United States. If war ever came, it would come on these islands; if the US was going to win, it would need an army capable not simply of landing on them, but of stripping them clean of Japanese defenders. Of all the crusaders drawn to this cross and to the salvation it promised his service, none was as fervent as the man appointed to the office of the Commandant of the Marine Corps in 1936.

With a squat frame, round glasses, and retreating, tight-­cropped hair, Major General Thomas Holcomb looked more like a frontier shopkeeper than one of the Marine Corps’ greatest heroes. In fact, he was. At Belleau Wood, in response to an Army superior’s question whether his battalion was “Holding or retreating,” Holcomb had huffed in reply, “When this outfit runs it will be in the other direction.” For an institution built upon smart appearance and fighting, the answer had made him a Marine Corps legend—­a reputation he had springboarded to become his service’s savviest partisan.

In a series of postwar assignments, Holcomb never lost sight of his ultimate objective: to build from the bones of his fellow First World War comrades the frame of the future Fleet Marine Force—­an amphibious version of the US Army composed of all the same components, everything from artillery to aircraft. It was an objective that led him to seek out staff positions in operations and training, even to cultivate relationships with just about every Roosevelt who had ever served in the Department of the Navy—­the closest thing the Roosevelts had to a family business. The most powerful example of this cultivation had been to achieve open access to the White House pool to rebuild the sickly body of his only son, an arrangement made possible by James Roosevelt, the president’s second child and administrative assistant. Justifiably discredited now for his prewar testimony to a Navy panel in which he voiced his opposition to integration—­“If it were a question of having a Marine Corps of 5,000 whites or 250,000 Negroes, I would rather have the whites”—Commandant Holcomb was nevertheless the man most responsible for the corps’ modernization of old equipment, the testing of new operations, the increase of amphibious exercises, and the improvement of coordination. Surrounded by office walls hung with the watchful portraits of his sixteen predecessors and a framed letter written 140 years earlier by the Corps’ second commandant that exhorted a young Leatherneck to seek vengeance on a Navy lieutenant who had punched him, no Marine in history had so single-­mindedly advanced the corps to an equal ranking in the US military’s order of battle.

On December 7, 1941, the day the Red Sun wings blackened the skies over Honolulu, all Marines awoke to the world for which Holcomb had prepared; amphibious war was upon them. The next day, sitting beside General George Marshall in the House Chamber packed with legislators, secretaries, and black-­robed justices, Holcomb listened to his old friend President Franklin D. Roosevelt articulate the terms of Japan’s future. “No matter how long it may take us,” the president promised, right hand gripping the lectern, his son James seated behind in a shadow to catch him should he stumble, “the American people in their righteous might will win through to absolute victory.” Few could understand what this meant in terms of lives and logistics, method and strategy. For Holcomb, it meant a Marine Corps of 500,000 men capable of teaching the Japanese a definition of absolute victory not seen since the Mongols. It definitely didn’t mean a Marine Corps of behind-the-­lines commando raiders; especially not commandos whose service was indentured to the Navy.

In January 1942, two memoranda arrived on Holcomb’s desk within a week of each other suggesting the creation of Marine Corps commandos. The first was from his superior, Admiral Ernest J. King, the recently appointed Chief of Naval Operations. As enamored with defense as he was with temperance—­“When they get in trouble they send for the sons-­of-­bitches,” he was rumored to say upon appointment—­King declared in his letter that the president was “much interested” in the “use of ‘commandos’ ” for raiding expeditions in the Pacific. The second letter was from James Roosevelt, a recently activated Marine Corps captain—­ a subordinate by five whole ranks who had no business in sending his commandant a memorandum, except that his father was the president and the man to whom Holcomb owed the health of his only son. If these proposals were not imposition enough, attached to King’s missive was a wholly unexpected backdoor suggestion as to the candidate who should lead this new capability. Unfortunately for Holcomb, the candidate was not a Marine but a former Army colonel clamoring for a Marine Corps commission. This unacceptable’s name was William J. Donovan.

Benjamin H. Milligan became a US Navy SEAL in 2001. He is a recipient of the Bronze Star and other awards. A native of Indianapolis, he currently lives in the Chicago area and has three sons.

The Rise of the Navy SEALs 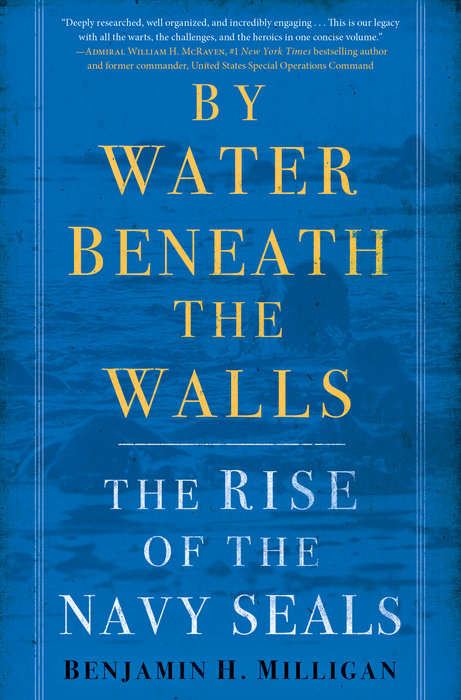