The USA Today bestselling author of the Club Sin novels kicks off a deeply sensual new series by introducing readers to Micah, a man who takes what he wants—until he meets the one woman he needs.

Real estate mogul Micah Holt exerts absolute control over all aspects of his life. He keeps his dark side hidden away from the press, who will chase down any hint of scandal. He’s always in command of his world, careful to expose his closely guarded secrets only to those he knows he can trust. Then Allie Bennett shakes his legendary discipline. She’s beautiful, pure, untainted. But is Micah willing to sacrifice her innocence for his own selfish obsessions?

When that sexy smile makes her body burn, Allie tries with all her might to ignore it. For one thing, Micah’s her new boss. For another, he’s as complicated as he is devastatingly handsome. Still, Allie can only fight so much before she gives in to his dangerous games. She knows he’s got dark secrets. But when she discovers the true depth of his pain, Allie must decide how far she’s willing to go to light the way for love.

Bound Beneath His Pain is intended for mature audiences.

The duet of naughty novellas: BOUGHT BY THE BOSS

The Dirty Little Secrets series: BOUND BENEATH HIS PAIN | TIED TO HIS BETRAYAL | RESTRAINED UNDER HIS DUTY | CUFFED BY HIS CHARM

Praise for Bound Beneath His Pain

“Bound Beneath His Pain is a read that will sweep you in and captivate you. Micah and Allie had me rooting for them, and, simultaneously, I was getting more invested in the secondary characters’ lives, wondering whose story will be next.”—The Book Cellar

“Five stars . . . Easily one of the best books I have read this year.”—Nice Ladies, Naughty Books

“I cannot wait for the next book. . . . I give this five stars for not only being a smoking hot read but one filled with so many emotions I cried.”—Sportochick’s Musings

An excerpt from Bound Beneath His Pain

“Get here. Pronto. Shit is going down!”

There are only three reasons my real estate assistant, Liv Sloan, sent me the vague text on Monday morning.
One, the deal for my last clients, who fled the lively Haight-Ashbury area to raise their family in the quiet and quaint Cole Valley district, fell apart.

Two, our boss is in a mood.

Stuffed inside the elevator, a block away from Union Square, with rank perfume smells tickling my nose, I wonder over Liv’s message. All three reasons are totally up her alley. She’s dramatic, but in a cute, funny way that I love.
When the elevator doors chime open, I ease my way out, entering Richardson Real Estate, and frown. While I love my job, the offices are a whole other thing. They’re in need of a major upgrade, which is the very reason I’m late today. I’d never meet clients in this run-down horror show.

I pass the empty waiting room, scrunching my nose against the stale smell hanging in the air, then pick up my pace, turning the corner down the main hallway, finding Liv standing by the watercooler near our cubicles.

“You’re not going to believe what’s happened,” she says, practically bursting with energy.

“Aliens have invaded Earth?” I offer.

“What?” She gives her head a slight shake, her brown curls bouncing on her shoulders. “Guess again.”

She gives me a playful nudge, her big, round brown eyes squinting. “Ha, I can only wish! Holt has bought out Richardson.”

I pause, waiting for her to say she’s joking. “You’re serious?”

A knot of worry tightens in my belly then I force myself to go numb. I’m a top-selling agent at Richardson. My job can’t be in jeopardy. This has to be good news, right? Still, I can’t wrap my head around it. Holt has made billions of dollars dealing in commercial properties. Richardson’s sales are only in the multi-millions, with a handful of agents selling middle-income homes. Sure, that’s Richardson’s strength in the San Francisco market, but why would Holt want to add it to their portfolio? Isn’t the middle-class market messy pocket change to them? “What in the world does Holt want with Richardson?” I voice my thoughts.

Liv gets herself a drink from the watercooler and then faces me. “From what I gathered, Holt wants to gobble up the entire real estate market. Businesses, high-class homes, middle-class homes; they want it all. Including taking the top agents at Richardson into Holt.”

Greedy pricks. They can’t be satisfied having a corner of the market to make their billions, they need to suck the whole damn thing dry. I lean against the cubicle next to us, my back straight as a pencil. “So, their plan is to swallow Richardson up?”

“To be honest, I don’t really know what the plan is.” She leans closer to me and tells me quietly, “They offered me a job at Holt. Which I guess means they’re taking you, too.”

“Indeed, that is the plan,” says a strong male voice.

Stacey Kennedy is an outdoorsy, wine-drinking, nap-loving, animal-cuddling, USA Today bestselling romance author with a chocolate problem. She writes sexy contemporary romance with a dash of suspense and a sprinkle of heart and humor, including titles in her wildly hot Kinky Spurs, Club Sin, and Dirty Little Secrets series. She lives in southwestern Ontario with her family and does most of her writing surrounded by lazy dogs. 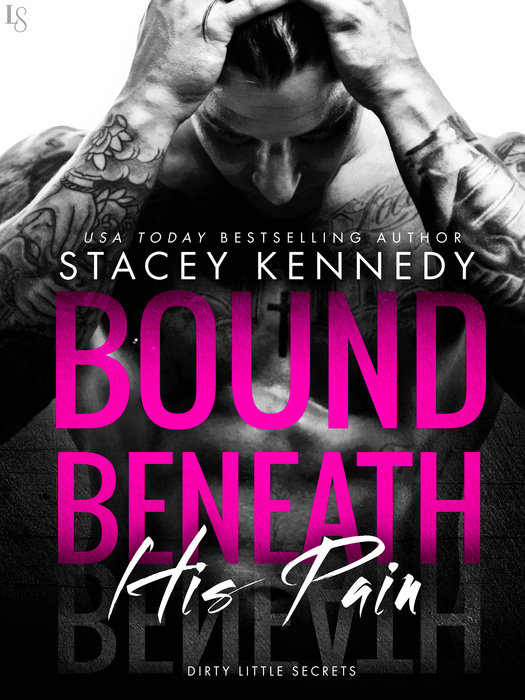