Lady Sara Emerson was jolted out of her dull provincial life by her cousin’s murder. Now that the killer seems to be targeting her, Sara seeks help from the man who was once her cousin’s fiancé, Gabriel Ferguson, Duke of Rossmoyne. With his towering frame and fiery personality, Ross cuts an intimidating figure. Living under his protection, however, has its own hazards—like the sudden urge Sara feels to take their relationship in new, exquisitely inappropriate directions.

Dazzled by the social graces of his betrothed, Ross never noticed her shy, blushing cousin. Looking at Sara now, though, he’s drawn to her lovely eyes and calm disposition. Funny how a year away from the hustle and bustle of the ton changes a man. But Ross has no intention of allowing a woman to interfere with his plan to return overseas. He will simply capture the murderer and set sail once again. The problem is, with her beguiling lips and heavenly touch, Sara makes him never want to leave home—or his bed—again.

Look for all of Sharon Cullen’s delightful historical romances:

The All the Queen’s Spies series: WED TO A SPY  | BOUND TO A SPY

Praise for The Reluctant Duchess

“Riveting . . . The true depth of the characters is revealed through dialogue that eschews Austen-style witticisms for thoughtful discussion and quiet but determined clashes of will. Intense romance and intriguing mystery make this a tale to be savored.”—Publishers Weekly (starred review)

“Cullen allows the suspense to ebb and flow naturally between finding clues and hitting dead ends. She wisely uses the downtime to develop two strong main characters. Ross’s ability to see past Sara’s shy reserve and his admiration for her courage and strength will have readers rooting for the couple’s success. Highly recommended for historical romance buffs who prefer a little mayhem in the mix.”—Library Journal (starred review)

“Many readers will enjoy this lively Victorian tale starring a protective hero and a quietly stubborn heroine.”—Anne Gracie, award-winning author of The Spring Bride

“The Reluctant Duchess is a tale replete with sizzling tension and high stakes, as could only come from the pen of Sharon Cullen.”—Ashlyn Macnamara, author of What a Lady Requires

An excerpt from The Reluctant Duchess

“Lady Sara Emerson to see you, Your Grace.”

Gabriel Ferguson, the Duke of Rossmoyne, cracked an eye open and quickly slammed it shut. “What the devil time is it?” he croaked.

“Half past eleven, Your Grace.”

Half past eleven. He hadn’t fallen into bed until half past four in the morning, with the dirt and smell of the last ship he’d sailed on still clinging to him. He’d tumbled into a deep sleep until Hector, his butler, had awakened him at this ungodly hour of half past eleven.

He rolled over, moaning at his sore muscles, and rubbed a hand down cheeks covered with several weeks’ worth of beard. He needed a bath, a shave, and a slow return to civilization. He wasn’t ready for London just yet.

Especially not at this hellish hour.

“What should I tell your visitor, Your Grace?”

Ross wrinkled his brow and scratched at his arm. “What visitor?”

Though Hector tried to repress his sigh, Ross heard it anyway. “Lady Sara Emerson. She is waiting in the drawing room.”

Ross stilled. “What, may I ask, is Lady Sara Emerson doing in my drawing room?”

“I’m certain I don’t know. What I do know is that this is her fifth visit in as many days.”

Lady Sara Emerson had called five days in a row? What in the everloving hell for?

“If I send her away today, she will only return tomorrow.” Hector produced a pile of calling cards resting innocently on a silver platter. Surely they weren’t all from Lady Sara. Hector held the tray out to Ross, who waved it away.
“So you’re saying I should meet with her now? Looking like this?” He indicated his unshaved visage and the fact he hadn’t had a bath in more days than he liked to remember.

“I can tell her to return this afternoon if you wish.”

“No. I will see her now.” While he wasn’t pleased to receive a visitor so soon after arriving home, he was curious as to why Lady Sara had come calling. He hadn’t seen her in two years, and even then he’d barely known her. There was no earthly reason he could think of that would bring her to his doorstep five days in a row.

Sara sat with her hands folded in her lap, her knees pressed together, and her derriere nearly sliding off the edge of the settee. She looked around the Duke of Rossmoyne’s drawing room in a sad attempt to control the urge to flee. Her heart was pounding, her breath kept getting stuck in her lungs, and her hands were sweating beneath her gloves. She knew the anxiety was only in her head—her mind playing tricks on her. And she knew her reaction was silly, but that didn’t calm her hammering heart or her erratic breathing.

Something thudded above her, making her jump and press a hand to her heart. She looked up at the ceiling, half expecting something to come crashing through.

She wiped her moist palms on her skirts, rocking forward and then back as she took a deep breath.

This was what she wanted—to speak to the duke. She’d told herself that over and over, but it hadn’t calmed her like she’d hoped it would. She’d spent five days waiting for him, and now all she wanted to do was run back to the safety of her home in Hadley Springs.

You will not run, Sara Emerson. You will stay right here until you speak to the duke.

The butler had not indicated in any way that His Grace was finally in residence, but the past five times she’d come calling she hadn’t made it past the front door. That she was now sitting in the drawing room had to mean he was finally here.

Or it could mean they are sending for the bobby to bodily take you away for being a pest.

Well, yes, there was that, too. But no, she had to believe that he had returned from wherever it was he’d been and was accepting callers.

She wriggled her bottom to bring some feeling back to it.

The door burst open and the Duke of Rossmoyne strode through, his boots clomping across the floor, a fierce scowl on his face.

Sara jumped up as if she’d been caught doing something she shouldn’t.

He stopped before her, all six feet plus of broad shoulders and overwhelming personality. She’d always quailed in his presence, intimidated by his strong personality and exceptional good looks, and today was no exception. She shot a nervous glance at the door with the half-formed thought of escaping. Instead she turned back and lifted her chin.

His face was almost completely hidden behind a thick russet beard. And that wasn’t the worst of it. As if his heathen appearance weren’t enough, he was wearing only a shirt and trousers. No necktie. The shirt was untucked, and the top button wasn’t buttoned. His throat was naked. Not to mention the lack of a frock coat. It was simply unheard of for a man to be seen without his frock coat.

The last time she’d seen him, his gorgeous reddish-brown hair had been neatly trimmed. Now it hung to his shoulders in uncontrolled waves that he hadn’t attempted to pull back. Worse still, it was wet, as if he’d just emerged from the tub. He didn’t appear embarrassed by his appearance. In fact, he looked utterly comfortable.
Mercy. It was hard enough asking for his help, but must he look as if he’d just rolled out of bed and donned the first thing that came to hand?

He stared down at her, and she couldn’t discern the expression in his eyes.

Falling back on ingrained manners, Sara dipped into a deep curtsy and hid her trembling hands in the folds of her skirt. “Your Grace. I appreciate that you were willing to see me.”

Sharon Cullen is the USA Today bestselling author of the Highland Pride series (Sutherland’s Secret, MacLean’s Passion) as well as many novels of Regency romance, romantic suspense, paranormal romance, and contemporary romance. If you’d like to find out more about the author and her books, you can visit her blog or her website. She is addicted to social networking, so you can find her on Facebook and Twitter. Friend her! Like her! Follow her! She’d love to hang out with you and talk about her passion: books. 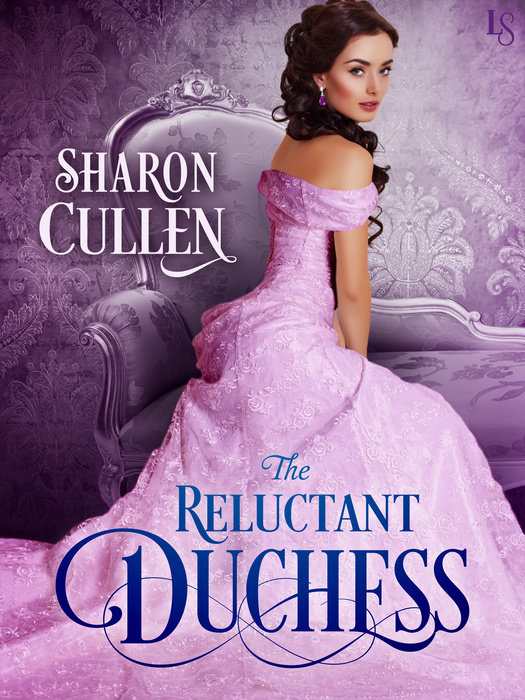