The sweeping story of the world’s first financial crisis: “an astounding episode from the early days of financial markets that to this day continues to intrigue and perplex historians . . . narrative history at its best, lively and fresh with new insights” (Liaquat Ahamed, Pulitzer Prize–winning author of Lords of Finance)

In the heart of the Scientific Revolution, when new theories promised to explain the affairs of the universe, Britain was broke, facing a mountain of debt accumulated in war after war it could not afford. But that same Scientific Revolution—the kind of thinking that helped Isaac Newton solve the mysteries of the cosmos—would soon lead clever, if not always scrupulous, men to try to figure a way out of Britain’s financial troubles.

Enter the upstart leaders of the South Sea Company. In 1719, they laid out a grand plan to swap citizens’ shares of the nation’s debt for company stock, removing the burden from the state and making South Sea’s directors a fortune in the process. Everybody would win. The king’s ministers took the bait—and everybody did win. Far too much, far too fast. The following crash came suddenly in a rush of scandal, jail, suicide, and ruin. But thanks to Britain’s leader, Robert Walpole, the kingdom found its way through to emerge with the first truly modern, reliable, and stable financial exchange.

Thomas Levenson’s Money for Nothing tells the unbelievable story of the South Sea Bubble with all the exuberance, folly, and the catastrophe of an event whose impact can still be felt today.

An excerpt from Money for Nothing

“The System of the World”

He had walked for three days to escape a farmer’s life just four years before. There’d been no hint he’d ever return. Yet, here he was again, about to open the gate. Little had changed: the main house, stone-built, comfortable; the barn behind; and, just across the track from the front door, the little patch of garden with its stand of apple trees, warming in the early summer sun. He’d been nineteen when he left, a country boy, awkward and unsociable, much given to scribbling in his notebook. He was twenty-three now and had a place in the world: a scholar of Trinity College, Cambridge, with rooms and a stipend and his own place at table. But now, smack in the middle of term, he was coming up the lane, crossing to the door, and stepping over the threshold, into the house.

Or rather, he had been chased back to Woolsthorpe’s quiet corner of the Lincolnshire countryside. Cambridge had been emptying since late spring, as each of its seven thousand or so residents who had anywhere to go desperately fled the approaching danger. That threat had been carried in its turn by those coming up the roads from London, on the run from the terror that had already reached the capital.

No one knows precisely how the plague reached London in the early months of 1665. Attentive observers had been nervous throughout 1664. The diarist and navy bureaucrat Samuel Pepys kept his eyes on Amsterdam, where a full-blown epidemic had begun in the previous fall. Pepys first took note of the danger in October, and then in November recorded in his diary that ships coming from infected ports now faced quarantine along the Thames. But some still arrived, smugglers carrying cloth, or, after the new year, with the start of the second Anglo-Dutch War, vessels bringing prisoners home. There were always rats on board, and rats carry fleas. Fleas host the Yersinia pestis bacterium.

Winter came, the slowest season for infection. For a time, it appeared that England might escape the scourge suffered on the other side of the North Sea. A few cases were reported. The bill of mortality for the crowded parish of St. Giles in the Fields records one plague death on Christmas Eve, 1664—a “Goodwoman Phillips.” When she fell ill, Phillips, her husband, and their unnamed and unnumbered children were placed in quarantine, and their home was shuttered, guarded, and bedaubed with the plea “Lord Have Mercy on Us.” But the infection apparently stopped there, and the next weeks were quiet. Plague was endemic in England, and every year saw a few come down with the disease. This appeared to be just one more case, and not the first of a new tidal wave of infection.

The winter ended, and spring began kindly. Two more plague deaths show up in London’s weekly bills of mortality in the last week of April, again in St. Giles in the Fields. The first week in May saw none . . . ​but then the numbers turned. Nine in the second week, three in the third. Fourteen for the week of May 23. Seventeen reported on the thirtieth. Forty-three on June 6—and the tally leapt from there. The official record topped a thousand on July 28, then doubled, and doubled again. By September, one thousand Londoners were dying each day. By year’s end, the official toll would approach seventy thousand, as many as one in eight of the city’s residents.

Everyone who could get out of town did. On June 21, the ubiquitous Pepys, secretary to the Admiralty, had a meeting in Whitehall, trying to unravel King Charles II’s perpetual money troubles. Achieving nothing more than usual, he set out across the city to Cripplegate, one of the ancient openings in London’s city wall. There, he recorded in his diary, he found “all the towne almost going out of towne, the coaches and waggons being all full of people going into the country.” He stopped a while at the Cross Keys tavern—long enough to enjoy the company of the barman’s wife—but by the next day he was ready to decide “whether to send my mother into the country today.” She didn’t want to go, but “because of the sicknesse in the towne, and my intentions of removing my wife,” he finally managed to put her on a coach that would take her east, toward Cambridgeshire.

London’s exodus had the predictable result: refugees from the capital carried the contagion into the countryside. Some towns barred their gates to keep the disease at bay. It didn’t work. In Cambridge, the blow fell on July 25. John Morley, five years old, was found dead at his home in the parish of the Holy Trinity. There were dark spots on his chest. When the plague inspectors came, they found Morley’s younger brother already showing black irruptions on his face. The child was taken to the pesthouse, where he died ten days later.

Ann Fisher, a child from All Saints Parish, died on the same day, confirming that the disease had spread beyond a single neighborhood. More cases followed, more deaths, and from there Cambridge followed London’s pattern. Business shuttered. Stourbridge Fair, one of the greatest open-air markets in Europe, was canceled. The university scattered. On August 7, the College of the Holy and Undivided Trinity acknowledged the obvious and decided to pay its members an allowance whether or not they remained in residence after that date. No record for Isaac Newton appears in Trinity College’s accounts for the extra stipend. The newly passed bachelor of arts had already fled, traveling the sixty miles north and a little west to Woolsthorpe.

There he remained for almost two years, cut off from every other scholar or mathematician. The isolation suited him. “In those days,” he would recall half a century later, “I was in the prime of my age for invention & minded Mathematics & Philosophy more than any time since.”

Those twenty months are now known as Newton’s annus mirabilis—his miracle year. In that brief time, he would solve several problems at the leading edge of contemporary mathematics. The decks thus cleared, he would go on to invent whole new ideas, laying the foundations of what we now call calculus, the mathematical tool used to analyze (among much else) change over time—where a cannonball might be at any instant, or a planet, for example. He then turned to what we now call physics, beginning with mechanics, the study of bodies in motion. Here too, before he could uncover specific results he had to work out fundamental concepts, mastering the first modern understanding of inertia, for example, an idea he first encountered in Descartes’s work, and thinking deeply about what it means to be a force—two ideas so essential to the future development of our understanding of the physical world that he in large measure had to construct them himself before he could go any further. Then came the first glimpses of what would become his theory of gravity and all that flowed from that epiphany. And, still not done, he dived further into an investigation of light, color, and optics that would yield his first great public triumphs. The record does not reveal when—or whether—Isaac Newton slept.

This seemingly superhuman accumulation of ideas during his plague-imposed exile has created a mythology of superhuman genius, conjuring worlds of thought out of country air. It’s not quite that simple, of course. Newton’s definitive biographer, Richard Westfall, points out that the program for the work to come was laid down in 1664, when Newton, just twenty-one, was still enrolled at Trinity College. That’s when he first dove into the mathematical inquiries that would dominate his first several months back home, and when he produced an extraordinary series of forty-five queries in which he grappled with fundamental issues of time, matter, motion, and much more. He didn’t need the plague, that is, to launch him into his comprehensive assault on the whole of natural philosophy. But it is true that when he reached the farm he was ready to move beyond anything Cambridge could teach him. He was “consistently concerned,” as Westfall wrote, “to develop general procedures” that would, in the end, produce not just new mathematics but a new way of thinking about how math insinuates itself throughout the material world.

Thomas Levenson is a professor of science writing at MIT. He is the author of several books, including The Hunt for Vulcan, Einstein in Berlin, and Newton and the Counterfeiter: The Unknown Detective Career of the World's Greatest Scientist. He has also made ten feature-length documentaries (including a two-hour Nova program on Einstein) for which he has won numerous awards. 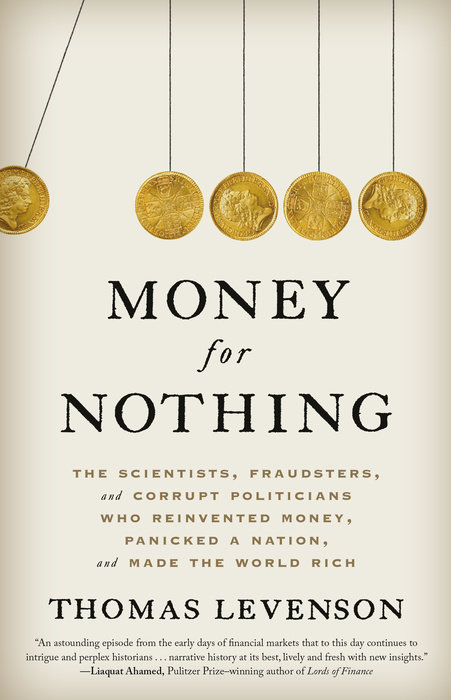