The Personal Crisis That Made a President

“An illuminating account of how Franklin D. Roosevelt’s struggles with polio steeled him for the great struggles of the Depression and of World War II.”—Jon Meacham

“A valuable book for anyone who wants to know how adversity shapes character. By understanding how FDR became a deeper and more empathetic person, we can nurture those traits in ourselves and learn from the challenges we all face.”—Walter Isaacson, bestselling author of Steve Jobs and Leonardo Da Vinci

In popular memory, Franklin Delano Roosevelt was the quintessential political “natural.” Born in 1882 to a wealthy, influential family and blessed with an abundance of charm and charisma, he seemed destined for high office. Yet for all his gifts, the young Roosevelt nonetheless lacked depth, empathy, and an ability to think strategically. Those qualities, so essential to his success as president, were skills he acquired during his seven-year journey through illness and recovery.

Becoming FDR traces the riveting story of the struggle that forged Roosevelt’s character and political ascent. Soon after contracting polio in 1921 at the age of thirty-nine, the former failed vice-presidential candidate was left paralyzed from the waist down. He spent much of the next decade trying to rehabilitate his body and adapt to the stark new reality of his life. By the time he reemerged on the national stage in 1928 as the Democratic candidate for governor of New York, his character and his abilities had been transformed. He had become compassionate and shrewd by necessity, tailoring his speeches to inspire listeners and to reach them through a new medium—radio. Suffering cemented his bond with those he once famously called “the forgotten man.” Most crucially, he had discovered how to find hope in a seemingly hopeless situation—a skill that he employed to motivate Americans through the Great Depression and World War II. The polio years were transformative, too, for the marriage of Franklin and Eleanor, and for Eleanor herself, who became, at first reluctantly, her husband's surrogate at public events, and who grew to become a political and humanitarian force in her own right.

Tracing the physical, political, and personal evolution of the iconic president, Becoming FDR shows how adversity can lead to greatness, and to the power to remake the world.

An excerpt from Becoming FDR

Franklin Roosevelt watched as the three doctors left the room. They’d finished their examination, they said, but before they offered their diagnosis, they needed a few minutes to confer. As they disappeared into the passageway of the rambling summer cottage, Franklin was left to wait.

For two weeks he’d been here, inside his room on the tiny island of Campobello, gravely ill, unable to rise from his bed. The memory of much of that time was a dark fog. He’d suffered terrible fevers and debilitating chills. Sometimes, his flesh would grow so tender that a single blanket felt like a load of sharp glass pressing down on him. He’d lost the use of much of his body below the neck, lost the ability to control his bladder and bowels. He’d spent agonized hours in fevered delirium, not sure whether he was awake or asleep.

Whenever his mind cleared, he was too feeble to do much of anything. He could only wonder, worry, and wait.

Somehow it had been only two and a half weeks since Franklin arrived on Campobello, the remote island off the coast of Maine where he and his thirty-six-year-old wife, Eleanor, kept a summer home. He’d been a different person then—active and energetic, still expecting a happy summer vacation with his family after a disorienting, sometimes difficult year.

It had been just over a year since his performance at the San Francisco convention had earned him a spot on the 1920 Democratic ticket as the vice-presidential candidate alongside the presidential nominee, Ohio governor James M. Cox. That fall, the Cox–Roosevelt ticket had been soundly defeated in the election. Aware that his public career had reached at least a temporary end, Franklin and Eleanor made plans to leave Washington, where they’d lived for the previous seven years during Franklin’s service as assistant secretary of the Navy. They settled in New York City with their five children—daughter Anna and sons James, Elliott, Franklin Jr., and John.

The spring and summer had been a hectic whirl. Franklin took on two jobs in the private sector, serving as name partner in a Wall Street law firm and as head of the New York office of the Fidelity and Deposit Company of Maryland, a bond underwriter. By early August, when he arrived on Campobello by boat, he was feeling worn down by the accumulated strain. Now thirty-nine years old, he had expected a happy interlude on the island where he’d spent summers since his childhood and where he and Eleanor owned a large, rustic summer cottage. Just three miles wide and nine miles long, the island had a single telephone line, in the home of a neighbor, and was reachable only by boat. It promised a welcome respite from the busy world.

It was on his fourth night on Campobello that the pain and terrible fever had taken hold. Quickly, his world shrank to the four walls of his bedroom, and the torturous, mysterious illness took over his life. Through the fog, he saw Eleanor attending to him constantly, assisted at times by his trusted aide, the political strategist Louis Howe. After a week, his fever had broken; he’d regained his sense of reason and of time and place. But his body still felt like an occupied territory, subject to cruel and unpredictable intervals of excruciating pain. Most concerning of all was what wasn’t happening. Though some of his muscle function had returned, he could not move his body below the waist.

Now, along with Eleanor and Louis, Franklin was waiting for the doctors to come back with an answer to the essential question: What had happened to him?

In another part of the house, Anna Roosevelt, Franklin and Eleanor’s fifteen-year-old eldest child, heard the doctors coming toward her own bedroom, seeking out a quiet place to talk. More invaders in the house.

When their father had appeared on the island two and a half weeks before, Anna and her four younger brothers had been thrilled. During the Roosevelts’ years in Washington, Eleanor had brought the children to Campobello for monthslong summer vacations, escaping the capital’s heat. But Franklin’s responsibilities in the Navy Department meant he’d been able to join them for only short stints. This August was to have been different, a long family holiday when the children could luxuriate in their father’s company.

But they’d had only one day.

It was a happy coincidence, given all the unpleasantness that was to follow, that they had spent that day together. The children would long remember its sun-dappled hours—sailing on Franklin’s boat, picnicking on a rocky island, swimming in the sea. A lovely, ordinary Wednesday, August 10, 1921. The last day of the Roosevelt family’s old life. The last day of Before.

Anna had begun to perceive the trouble that evening when Franklin went to bed without dinner, complaining of a pain in his back. The next morning, when she looked in on her father, he said he’d be all right. But his smile had been weak.

That was when the invasions began—when the doctors started coming, when the adults’ faces darkened with concern, when her father, always at the center of everything, became a passive presence on the other side of his closed bedroom door. Eleanor, serving as his nurse, was mostly behind that door as well. Louis Howe, a coarse and often imperious man whom Anna disliked, slept on a cot outside Franklin’s bedroom and kept the children at bay. The adults all looked more and more downtrodden, partly from fatigue, partly from the worry that was swelling inside. The details they kept to themselves, but the general message was clear: The children’s father was very, very sick.

Now, two weeks since Anna’s father had first taken to his bed, there were more invaders—three doctors who had arrived that morning to examine Franklin. When they finished, they headed toward Anna’s bedroom. At the sound of their voices, Anna hurried into a closet. Crouching quietly as they entered the room, she tried to make out their words.

Anna knew all about the signals grown-ups sent when they considered their topic unfit for children’s ears. Her grandmother, Sara Delano Roosevelt, would pat or squeeze her theatrically, then slow down and accentuate her words, a signal to her conversation partners that they’d best tread carefully with the children around. Her mother was more icily direct. “What do you want, dear?” she would say when she discovered Anna lingering on the fringes. These words were intended less as a question than a command: You’re not meant to be here; stop hanging about.

But Anna had grown adept at finding out what it was the grown-ups didn’t want her to hear. Perhaps it was the interest in adult topics that came with her advancing age; perhaps it was the tension, unspoken but omnipresent, that hovered between her parents in recent years. She could not make out every word the doctors spoke to one another as they summarized their inventory of Franklin’s condition: “lost the use of part of his hand . . . ​partial paralysis in the face . . . ​nonresponsive muscles below the waist.” But she did not miss the diagnosis they had unanimously agreed upon, contained in two little terrifying words: “infantile paralysis.”

Soon the doctors were leaving the room again. It was time for them to tell Franklin the news.

That day was Thursday, August 25, 1921. The Great War had been over for nearly three years, but the global shifts caused by the conflict—and the terms of the subsequent peace—were, in many ways, just beginning.

That same day in Berlin, some 3,500 miles from Campobello, representatives of the American and German governments finally signed a peace treaty formally ending the state of the war that had existed between the two powers since 1917. A separate peace had become necessary after the Senate’s rejection in November 1919 of the Paris Peace Conference treaty, due to the inclusion of the proposed League of Nations.

In Germany, there was widespread disillusionment with the peace, thanks to the enfeebled economy and the high cost of reparations the defeated country was obligated to pay to the Allied powers. Right-wing political factions were propagating the idea that Germany had not lost the war on the battlefield; rather, victory had been stolen from the Fatherland by traitorous Bolsheviks and Jews who had infiltrated the government and capitulated dishonorably in the armistice of November 1918. In the last days of July 1921, as Franklin had prepared to leave New York for Campobello, a thirty-two-year-old Bavarian orator who raged against the treachery of the “November criminals” had assumed the chairmanship of an Aryan nationalist faction headquartered in Munich. His name was Adolf Hitler.

Jonathan Darman is the author of Landslide: LBJ and Ronald Reagan at the Dawn of a New America. He is a former correspondent for Newsweek, where he covered national politics, including John Kerry’s and Hillary Clinton's presidential campaigns.

The Personal Crisis That Made a President 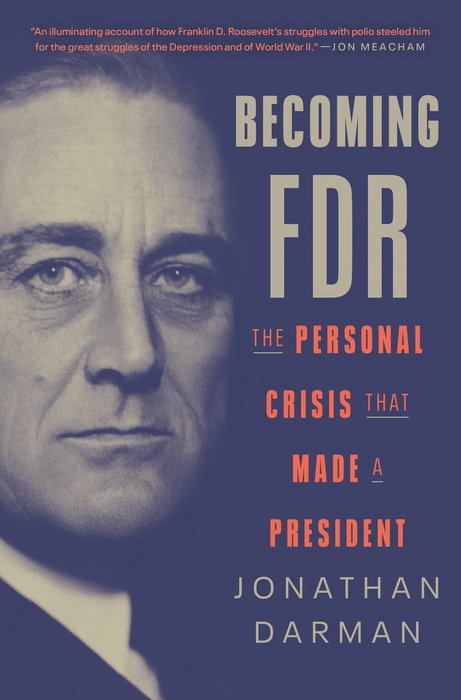