An eye-opening look at the right-wing strategy to reverse the gains American women have made, chronicling the actions at the highest levels of government to turn back the clock on women’s rights

With religious extremists in key decision-making posts and our federal judiciary filled with appointees whose values are drastically out of step with the pro-choice sentiments of the majority of the American people, abstinence-only sex education is now the rule, ideology has trumped science in domestic and global health policy, and reproductive freedoms are perilously close to toppling. But while many of the individual facts are known, no one until now has connected all the dots and drawn the Big Picture that shows exactly how radical and how successful this quiet revolution has been.

Judge by judge, law by law, and appointee by appointee, The War on Choice speaks the truth about what is happening, and also tells the stories of some of the women whose lives have been affected by these court decisions and federal policies. Combined with a hands-on plan of action for those who want to raise their voices in protest, this book will be riveting reading.

And there is no one better equipped to write about the insidious, step-by-step chipping away of rights, or about what we can do to fight back, than Gloria Feldt, president of Planned Parenthood Federation of America. Her thirty years of work with the organization combined with her personal experience—as a woman who came out of the same West Texas political landscape as did George W. Bush but faced a very different economic and social reality as the mother of three children by the age of twenty—make her the ideal spokeswoman for those who are alarmed by the current political climate.

This book will be a wake-up call, describing in jaw-dropping detail the story of what the anti-choice movement is doing to the rights to birth control, abortion, and privacy.

An excerpt from The War on Choice

The Right-wing War to Take Away Our Rights

I think contraception is disgusting—people using each other for pleasure . . . for those who say I can’t impose my morality on others, I say watch me.

I am outraged that [the abortion issue] is viewed from the perspective of the woman—a femme-centric perspective that condones the self-indulgent conduct of the woman who was damn careless in the first place.

I will do everything in my power to restrict abortion.

On November 5, 2003, President George W. Bush took a giant step toward fulfilling his promise to restrict abortion. He signed a criminal ban on abortion procedures, the deceptively named “Partial Birth Abortion Act.” Surrounded by a phalanx of gray-haired, self-congratulatory white men—and no women!—he signed away a great portion of women’s power over their reproductive lives. This was a real milestone: for the first time in history, the two houses of Congress had passed, and a president had signed into law, a federal law criminalizing established medical procedures. With the House of Representatives, the Senate, and the White House now aligned in lockstep, ready to take away women’s reproductive rights, the right wing’s war on women and choice had scored a major victory.

Now we will begin to focus on the methods (of abortion) and declare them to be illegal.

The law Bush signed that day is extraordinary: it is the only federal law ever enacted that criminally bans abortion procedures. And it is a law passed and signed in brazen defiance of the Supreme Court. For it was well known to policy makers that this abortion ban has the exact same constitutional deficiencies as the Nebraska law that the Supreme Court had struck down just three years before in Stenberg v. Carhart: it has no exception to save a woman’s health, and only an inadequate exception to save her life, and the language of the law is so broad that it could ban techniques that doctors use regularly and safely even early in the second trimester. Besides placing the lives and health of women at risk, it puts doctors at risk of prosecution for providing safe, medically necessary care. In the Nebraska case, the court held that these restrictions are an “undue burden” on women. They are plainly bad policy, even if the law allowed them: who wants politicians telling our physicians what procedure to use on us for any surgery?

U.S. Attorney General John Ashcroft, for one. Immediately after the bill was signed, Ashcroft moved to assign enforcement of the law, which he said he intended to do vigorously. He directed the Justice Department’s civil rights division to enforce the law, explaining that the law enlarges the civil rights of the fetus.

[The] partial-birth abortion ban is a political scam but a public relations gold mine. . . . This bill, if it becomes law, may not save one child’s life. . . . The major benefit of this bill is the debate that surrounds it.

The passage of the Partial-Birth Abortion Act was the culmination of a long-term strategy by right-wing extremists who have been working, ever since Roe, to take away a woman’s right to control her reproductive destiny. The abortion ban seemed at first to prohibit only a small number of rare, late-term procedures (just which procedures those are is a matter of debate, since, as Randall Terry, one of its supporters, says, “partial-birth abortion” is a public relations term, not a medical one). But in reality, the ban uses sweeping language that the Supreme Court has already recognized would affect a wide range of abortions. The entire debate about so-called “partial-birth abortion” is part of a larger campaign to make all abortions illegal. It is a right-wing public relations strategy to manipulate language in order to sensationalize the abortion debate, to make the public believe that abortions are performed willy-nilly through all nine months of pregnancy by reckless physicians in cahoots with mothers who are intent on murdering their viable babies, and thereby bring both the public and formerly pro-choice politicians over to the anti-abortion camp. The incendiary language was designed to deceive the American people, and it worked. Dr. Leroy Carhart, the plaintiff in the case that struck down the previous ban, calls it “partial-truth abortion.”

And it is but one skirmish in a much larger war—the war on choice. The right to choose is not just about abortion, not by a long shot. It comprises the right to have full access to family planning information, health care, and products; the right to have chil- dren or not; sex education for young people that goes beyond the abstinence-only education being promoted by the right wing; and the right to medically accurate information about sexuality for the general public, too. Having the right to choose determines whether women will find an equal place at life’s table, whether children will be truly valued, and whether everyone’s personal liberties, privacy, and bodily integrity will be safeguarded against the ideology of the right.

Today’s courts will almost certainly overrule the ban that President Bush signed into law. But the federal appeals courts are increasingly being filled with anti-choice ideologues, so who knows what will happen in the future? What those opposed to a woman’s right to choose hope for is that by the time this law reaches the Supreme Court, there will be a different court, a court that, like the executive and legislative branches of the government, will be marching in lockstep with the anti-choice right.

The anti-choice minority in this country is taking full advantage of the pro-choice majority’s complacent assumption that with Roe v. Wade we won reproductive choice once and for all. Nothing could be further from the truth. In fact, Roe v. Wade so galvanized the anti-choice groups that almost as soon as the decision was handed down they began attacking reproductive rights on all fronts—in legislation, in the media, in the courts, in the state houses, in your hometown. This isn’t an abortion war, it’s a culture war, and its objective is to take away the economic, social, and political gains women have made since those years. Well funded and well organized, they are vocal, disciplined, and relentless in their assaults. They are creating a fearful atmosphere of sexual puritanism that hearkens back to the 1950s, and their goal is to return women to the position of powerlessness they occupied in that era.

To put it into its proper cultural and historical context, we must understand that the abortion ban—along with the many other attacks on women’s reproductive rights—is part of a growing backlash against women’s equality and freedom. Over the past fifty years, women have gained an astonishing amount of power, and Roe v. Wade, which gave women control over their fertility, was another major step toward empowerment. Not only did it legalize abortion but it became a symbol of our independence, because reproductive freedom is fundamental to a woman’s aspirations—to education, financial stability, and self-determination. Reproductive freedom encompasses the right to freely and responsibly determine the number and spacing of our children.The simple ability to separate sex from childbearing gives women the power to control all other aspects of their lives. This is a profound shift in the gender power balance—a shift that most of us understand to be an advance in social justice, especially when we are thinking about ourselves and our own daughters. But it poses a threat to the status of the entrenched hierarchy.

That’s why the right-wing extremists are so focused on taking away reproductive rights. And that’ s why they are using every weapon in their arsenals to ensure that politicians, judges, government appointees, and public health care agencies follow the anti-choice agenda. They are determined to take away not only the right to abortion but all reproductive rights.

There is nothing new about this backlash. It’s human nature that when the established order has been changed, there will be a reaction, and the magnitude of this reaction shouldn’t surprise us. The advancement of women in the last fifty years has been breathtaking. There has been no comparable advancement in human history. There are victories along the way, but none of the victories is secure because of the pressures that undermine women’s rights and advancement. Because reproductive rights are taken for granted, people who oppose them have been able to go on the offensive and make gains that do not reflect the will of the majority. So now, women who value their autonomy have to step up and take action.

Gloria Feldt is the president of the Planned Parenthood Federation of America. She lives in New York City and Phoenix, and is married to Alex Barbanell. Between them they have six children, nine grandchildren, and one great-grandchild. 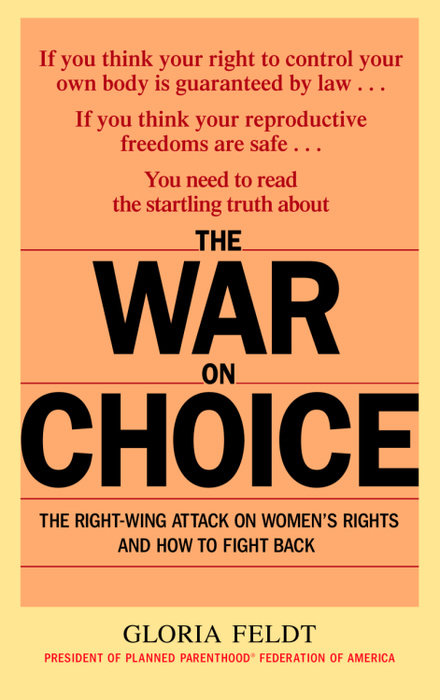