NEW YORK TIMES BESTSELLER • Set between the events of Return of the Jedi and The Force Awakens, the never-before-told story that began with Star Wars: Aftermath continues in this thrilling novel, the second book of Chuck Wendig’s bestselling trilogy.

The Emperor is dead, and the remnants of his former Empire are in retreat. As the New Republic fights to restore a lasting peace to the galaxy, some dare to imagine new beginnings and new destinies. For Han Solo, that means settling his last outstanding debt, by helping Chewbacca liberate the Wookiee’s homeworld of Kashyyyk.

Meanwhile, Norra Wexley and her band of Imperial hunters pursue Grand Admiral Rae Sloane and the Empire’s remaining leadership across the galaxy. Even as more and more officers are brought to justice, Sloane continues to elude the New Republic, and Norra fears Sloane may be searching for a means to save the crumbling Empire from oblivion. But the hunt for Sloane is cut short when Norra receives an urgent request from Princess Leia Organa. The attempt to liberate Kashyyyk has carried Han Solo, Chewbacca, and a band of smugglers into an ambush—resulting in Chewie’s capture and Han’s disappearance.

Breaking away from their official mission and racing toward the Millennium Falcon’s last known location, Norra and her crew prepare for any challenge that stands between them and their missing comrades. But they can’t anticipate the true depth of the danger that awaits them—or the ruthlessness of the enemy drawing them into his crosshairs.

“[Chuck] Wendig once again strikes gold, offering a sweeping narrative with plenty of insight into both the state of the galaxy at large and beloved characters both new and old.”—Alternative Nation

“Star Wars: Aftermath [reveals] what happened after the events of 1983’s Return of the Jedi. It turns out, there’s more than just the Empire for the good guys to worry about.”—The Hollywood Reporter

“The Force is strong with Star Wars: Aftermath.”—Alternative Nation

“The Star Wars universe is fresh and new again, and just as rich and mysterious as it always was.”—Den of Geek

The grass swishes and shakes as Sinjir crawls up on his belly. “Ow!” he says, flexing his hand and popping the knuckle of his thumb in his mouth. “This grass is slicing me to bits.”

“It drinks your blood,” Jas says, easing closer. “Thirstgrass sustains itself on the creatures who walk through it. Little sips from little cuts.”

“Because it’s true every hour.”

“It’s my update, too,” Temmin says, crawling up next to them. “Seriously, this is awful. I want to burn all this grass. And the thorny bushes. And the flies.” As if to demonstrate, he swats at the back of his hand. “See? Ugh. I should’ve stayed on Chandrila.”

“Can’t we just go back to Kai Pompos?” Sinjir asks. “We’d make it by nightfall. There’s a little drinkery around the back of the town. They have a still where they ferment this root, this korva root. So we go back, we tip back a few under the Irudiru moons, we reformulate our strategy—”

“This is a fact-finding mission,” Norra says, feeling like a mom commanding a child to stay put. “We stay here until all the facts are found.”

“Facts are,” Temmin says, “the guy isn’t coming out. He’s dug in like a blood-bug.” They’d heard rumors that Aram was a big-game hunter, and thought maybe that would afford them an opportunity to get close to him. But so far, no go. Nor has he gone out for supplies. Or even a breath of fresh air. They’ve seen neither hide nor hair of the man. Just droids. “Here’s what we do. We take Mister Bones—” Bones sits crumpled up behind them, his skeletal body folded tightly with his head bowed and his arms enclosing his knees. “And we let Bones march down there, find the guy, drag him up here onto the plateau, and we question him. Simple.”

“As simple as chasing birds with a hammer,” Sinjir mutters.

“Everyone hush,” Jas says. “Temmin, did you build my thing or not?”

“Yeah, yeah.” He fishes around in his pocket and holds up a pair of devices in the palm of his hand. One looks like a round from a slugthrower, but it’s been modified—the shell casing crimps around a circuit bulb, and the tip of that bulb has four little prongs. Like insect mandibles. The second device is round, no bigger than a button, with a little zigzag antenna sticking out.

“It’s a bug,” Temmin says, sounding impressed with himself.

“This planet has enough bugs without us adding more to it,” Sinjir grouses. “And before anyone corrects me, yes, I know, it’s a listening bug and not a real bug and—oh, never mind. Good job, Jas. Now what?”

“We can’t get eyes on, so we need to get ears on. I load this into my rifle and fire it right at his manse. Then—” She grabs the second device. “This jury-rigged earpiece with which to listen in.”

“Clever,” Sinjir says. “Still not sure what I’m doing here.”

Jas hands him the earpiece. “You’re going to do the listening.”

“Joy.” He makes a face as he takes it and screws it into his ear.

The bounty hunter unslings the slugthrower from her back. Norra again grabs the binocs and focuses them at the compound.

A herd of animals have come up alongside the invisible perimeter— long-limbed, long-necked leathery things, these beasts. They number in the dozens. Some stop to nip at the tufts of ki-a-ki bushes, while the others bat at one another with bony protuberances atop their narrow snouts. Norra is pretty sure they’re morak. Big things, but herbivores. Though she’d hate to get stomped under those long legs—legs that end in claw-tipped feet.

Jas pulls the slugthrower close and uses her thumb to pop open a bipod at the end of the barrel, giving it stability. She tugs the scope tight against her eye. Norra watches her through the grass—the way Jas draws a breath deep, then slowly exhales it until no breath remains and she is still . . .

It’s surprisingly close to what Luke taught Leia, isn’t it?

Shut out the world. Be mindful, but empty.

(Of course, Jas does this in order to kill people more efficiently.)

The bounty hunter’s finger coils around the trigger.

But then—
The morak all look up at the same time. A gesture of alarm.

Sinjir plucks the earpiece out of his ear, scowling at it. “This thing is fritzing out. It’s making this . . . high-pitched whine. Wretched sound.”

Down below, the morak begin to move. All of them at once, a herd movement. They go from walking to galloping, their long bony legs launching them forward with a swiftness that surprises Norra.

The animals are headed toward the hill where the crew is waiting.

The ground begins to vibrate beneath them.

It’s too steep, surely. They can’t—

The animals reach the bottom of the hill and begin to scramble up the side of it. Their clawed feet make great haste, and now Norra knows what those claws are for. Dust spirals behind them.

They’re coming right for us.

She and the others spring up out of hiding and turn tail, bolting through the grass. The morak crest the hill, bleating and blowing mucus from their snouts. The ground rumbles as the herd stampedes.

The grass slices at Norra’s arms, but she can’t waste time caring. Everyone moves fast—everyone except Bones, who sits somewhere under cover, and is hopefully resilient enough to suffer the knocks and blows of the morak. She’s not even sure where they should go. Run straight? Turn to the side? The morak are coming right up behind them—

One lopes past Norra in a lumbering gallop, swiping at her with its long neck—the thing is twice her height and she just barely darts out of its way even as others come up behind her. Ahead, though she can’t see it, the far side of the hill awaits. What then? Run down it, trying not to fall? Duck and pray the charging morak go over the edge?

The bounty hunter runs next to her, and when one morak comes behind her, Jas jabs at it with the barrel of her slugthrower—and the beast roves drunkenly toward Norra. It clips her and she staggers—

Her legs go out from under her—

There’s Temmin, grabbing her by the belt to keep her from falling. It’s just enough to help her get her legs back under her. Norra is about to thank her son—

She doesn’t get the chance.

A sound hits them, a sonic hum. Suddenly, the morak are squawking and turning sharply away, the herd splitting in twain as if by an invisible wedge. Norra thinks, Thank the stars for whatever is doing that.

But then something lands in the grass in front of them—the thing rolls a few times like a flung rock. It beeps three times in succession. Then:

An implosive sound—foomp. The air lights up around them, a hard pulse of bright light. It concusses the air, too, hitting her like a thunderclap. Norra is suddenly blind and deaf, her ears ringing, her vision washed away in a tide of searing white. She fumbles for the blaster at her side—she whips it out, and it’s suddenly rocked out of her hand, clattering away.

A shape emerges in front of her as the white light begins to recede: a person-shape. Norra thinks: Aram has us. We thought we were watching him, but he was watching us.

She leans forward, starts to stand.

Norra asks as her eyes adjust, “Who is that? Who’s there?”

The figure steps forward. She spies two blasters held aloft, one in each hand, and one pointed right at her. “Name’s Han Solo. Captain of the Millennium Falcon. Who the hell are you?”

Chuck Wendig is the New York Times bestselling author of Star Wars: Aftermath, as well as the Miriam Black thrillers, the Atlanta Burns books, and Zer0es and Invasive, alongside other works across comics, games, film, and more. He was a finalist for the John W. Campbell Award for Best New Writer and an alum of the Sundance Screenwriters Lab, and he served as the co-writer of the Emmy-nominated digital narrative Collapsus. He is also known for his popular blog, terribleminds, and books about writing such as Damn Fine Story. He lives in Pennsylvania with his family. 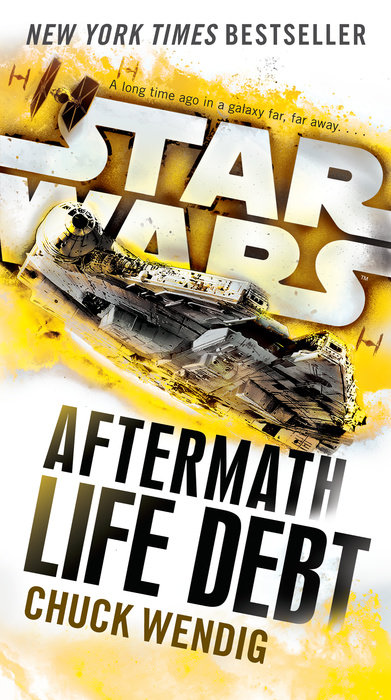