A woman’s mysterious death puts her husband and son on a collision course with her demonic family in the first novel to be translated into English by the International Booker Prize–shortlisted author of The Dangers of Smoking in Bed—“the most exciting discovery I’ve made in fiction for some time” (Kazuo Ishiguro).

A young father and son set out on a road trip, devastated by the death of the wife and mother they both loved. United in grief, the pair travel to her ancestral home, where they must confront the terrifying legacy she has bequeathed: a family called the Order that commits unspeakable acts in search of immortality.

For Gaspar, the son, this maniacal cult is his destiny. As the Order tries to pull him into their evil, he and his father take flight, attempting to outrun a powerful clan that will do anything to ensure its own survival. But how far will Gaspar’s father go to protect his child? And can anyone escape their fate?

Moving back and forth in time, from London in the swinging 1960s to the brutal years of Argentina’s military dictatorship and its turbulent aftermath, Our Share of Night is a novel like no other: a family story, a ghost story, a story of the occult and the supernatural, a book about the complexities of love and longing with queer subplots and themes. This is the masterwork of one of Latin America’s most original novelists, “a mesmerizing writer,” says Dave Eggers, “who demands to be read.”

There was so much light that morning and the sky was so clear, its warm blue marred by a single white smirch, more like a plume of smoke than a cloud. It was already late and he needed to go and that hot day was going to be just like the next: if it rained and he was hit with the river’s humidity and the stifling Buenos Aires heat, he would never be able to leave the city.

Juan swallowed a pill dry to stave off the headache he wasn’t feeling yet and went into the house to wake up his son, who was sleeping under a sheet. We’re leaving, he said as he shook him gently. The boy woke up right away. Do other children have such shallow, vigilant sleep? Wash your face, he said, and carefully cleared sleep from the boy’s eyes. There was no time for breakfast, they could stop on the way. He loaded the already-­packed bags, and debated a while among various books until he decided to add two more. He saw the airplane tickets on the table: they were still a possibility. He could lie down and wait for the date of the flight, some days later. To ward off inertia, he tore up the tickets and threw them in the trash. His long hair made his neck sweat: it was going to be unbearable under the sun. He didn’t have time to cut it now, but he got the scissors from the kitchen drawer and stashed them in the same plastic box where he kept his pills, the blood-­pressure monitor, the syringe, and some bandages, basic first aid for the trip. Also, his sharpest knife, and the bag full of ashes he would use later. He packed the oxygen tank: he was going to need it. The car was cool; its leather hadn’t absorbed too much heat during the night. He loaded the picnic cooler, filled with ice and two bottles of cold soda, into the front seat. His son had to ride in the back; Juan would have preferred to have the boy beside him, but it was illegal, and he couldn’t risk any problems with the police or the army, who kept a brutal watch over the highways. A single man alone with a child could be suspicious. The repressive forces were unpredictable, and Juan wanted to avoid any incidents.

Gaspar, he called, without raising his voice too much. When he received no answer, he went inside to look for the boy. He found Gaspar trying to tie the shoelaces of his sneakers.

“You’re making a mess of it,” he said, kneeling down to help. His son was crying, but Juan couldn’t console him. Gaspar missed his mother—­she had done these things automatically: trimmed his nails, sewn his buttons, washed behind his ears and between his toes, asked if he’d peed before leaving, taught him how to tie his shoelaces in a perfect bow. Juan missed her too, but he didn’t want to cry with his son that morning. You have everything you want? he asked. We’re not going to come back for anything, I’m warning you.

He hadn’t driven so far in a long time. Rosario always insisted that he drive at least once a week, just so he didn’t get out of practice. The car was too small for Juan, like almost everything: pants were too short, shirts too tight, chairs uncomfortable. He checked to be sure the Auto Club’s guide was in the glove box, and they set off.

“Me too, but we’re going to stop for breakfast at this great place I know. In a while, okay?”

“And my head hurts when I don’t eat. Be strong. It’s just a little while. Don’t look out the window or you’ll get even dizzier.”

He himself felt worse than he wanted to admit. His fingers were tingling, and he recognized the erratic palpitations of arrhythmia in his chest. He adjusted his sunglasses and asked Gaspar to tell him the story he’d read the night before. At six years old, the boy already knew how to read quite well.

“Yes, you do. I’m in a bad mood, too. Let’s try to change it together. Or are we going to be all pissy for the whole trip?”

Gaspar laughed at Juan’s use of the word “pissy.” Then he recounted the story of the jungle queen who sang while she walked through the trees. Everyone liked to listen to her. One day some soldiers came and she stopped singing and became a warrior. The soldiers caught her and she spent a night locked up, and then she escaped, but to escape she had to kill the guard keeping watch over her. No one could believe she was strong enough to have killed him because she was very thin, so she was accused of being a witch and they burned her at the stake—­tied her to a tree and set fire to it. But in the morning, instead of a body, they found a red flower.

“A tree of red flowers.”

“That tree is called a ceiba. There aren’t many around here, but when I see one, I’ll show you. There are a lot of them near your grandparents’ house.”

In the rearview mirror he saw Gaspar frown.

“What do you mean there are a lot?”

“That story is a legend. I’ve explained what a legend is.”

“Her name is Anahí. Maybe she did exist, but the story about the flowers is told to remember her, not because it really happened.”

“So did it really happen or not?”

He liked to see how Gaspar got serious and even angry, how he bit the side of his lip and opened and closed a hand.

“Do they burn witches now, too?”

“No, not anymore. But there aren’t very many witches now.”

It was easy to get out of the city on a Sunday morning in January. Before he knew it the tall buildings were behind them, and then so were the low houses and tin lean-­tos of the shantytowns on the city’s outskirts. And suddenly the trees of the countryside appeared. Gaspar was asleep by then, and Juan’s arm burned in the sun just like any regular father’s on a weekend of pools and picnics. But he wasn’t a regular father, and people could tell just by looking into his eyes or by talking to him for a while. Somehow, they recognized the danger: he couldn’t hide what he was. It wasn’t possible to hide something like that, at least not for long.

He parked in front of a café advertising hot chocolate and croissants. Time for breakfast, he told Gaspar, who woke up immediately and rubbed his enormous, slightly distant blue eyes.

The woman who was cleaning the tables gave the impression she owned the place, and of being friendly and gossipy. She shot them a curious look when they sat down far from the window and near the fridge. A boy with his little toy car and his father, who was two meters tall and had long blond hair down to his shoulders. She wiped their table with a cloth and wrote their order on a notepad, as if the café were crowded with customers whose orders she had to keep straight. Gaspar wanted a hot chocolate and croissants with dulce de leche; Juan ordered a glass of water and a cheese sandwich. He took off his dark glasses and opened the newspaper that was on the table, though he knew the important news never appeared in the papers. There were no articles about clandestine detention centers or nighttime clashes, no pieces on abductions or stolen children. Just stories about the “Little World Cup” being held in Uruguay, which didn’t interest him at all. Sometimes he had a hard time faking normalcy when he was distracted, when he was so hopelessly sad and worried. The night before, he’d tried to communicate, yet again, with Rosario. He couldn’t. She wasn’t anywhere, he couldn’t sense her; she was gone in a way that he found impossible to understand or accept.

The boy was sweating, his hair wet and his cheeks flushed. Juan touched his back. His shirt was soaked.

“Wait here,” he said, and went out to the car to get a dry shirt. Then he led Gaspar to the café’s restroom to wet his head, dry his sweat, and change his shirt, which smelled a little like diesel.

When they got back to the table, their breakfast and the woman were waiting for them; Juan asked for another glass of water for Gaspar.

“There’s a lovely campground near here, if you want to cool off in the river.”

“Thanks, but we don’t have time,” said Juan, trying to sound friendly. He unbuttoned the top buttons of his shirt.

“You boys traveling alone? My goodness, the eyes on this child! What’s your name, son?”

Juan wanted to say, Gaspar, don’t answer, but the boy told her his name and the woman pounced, asking in an insincere, childish voice:

“And where’s your mommy?”

Juan felt the boy’s pain in his entire body. It was primitive and wordless, raw and vertiginous. He had to clutch onto the table and make an effort to break away from his son and that pain. Gaspar couldn’t answer and looked to his father for help. He’d only eaten half a croissant. Juan thought he would need to teach the boy not to cling like that, not to him or to anyone else.

Mariana Enriquez is a writer and editor based in Buenos Aires. She has published two story collections in English, Things We Lost in the Fire and The Dangers of Smoking in Bed, which was a finalist for the International Booker Prize, the Kirkus Prize, the Ray Bradbury Prize for Science Fiction, Fantasy & Speculative Fiction, and the Los Angeles Times Book Prize in Fiction. 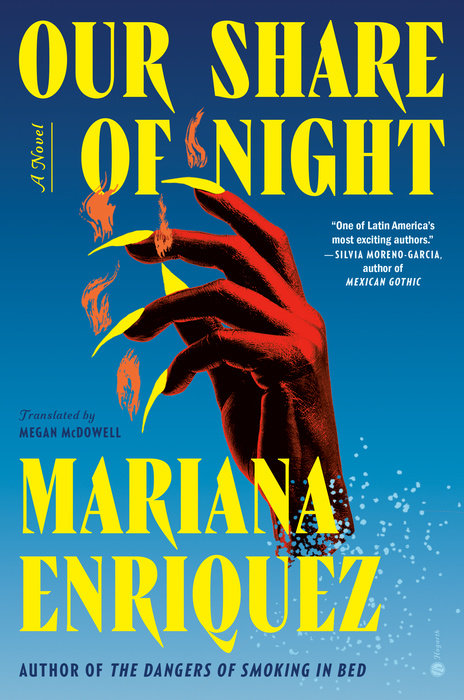